Accidents can change the fates of entire families. And you would expect that when a loved one manages to survive, their relatives would give them all the support that they need, no matter what it might look like. However, it seems that in some cases, miracles don’t extend that far.

Reddit user u/basketsoftough shared how she was finally driven to give her parents an ultimatum. The deaf woman lost her hearing when she was in a major accident when she was 18. Over the years, she did her best to convince her parents to learn American Sign Language, ASL, to help them all communicate better.

Alas, it was all in vain. Finally, she had enough and called them out for not wanting to put in a bit of extra effort for her sake. They weren’t too happy about it and the redditor turned to the AITA community for a verdict on who was right and who was wrong. Scroll down to read the full story in the redditor’s own words. 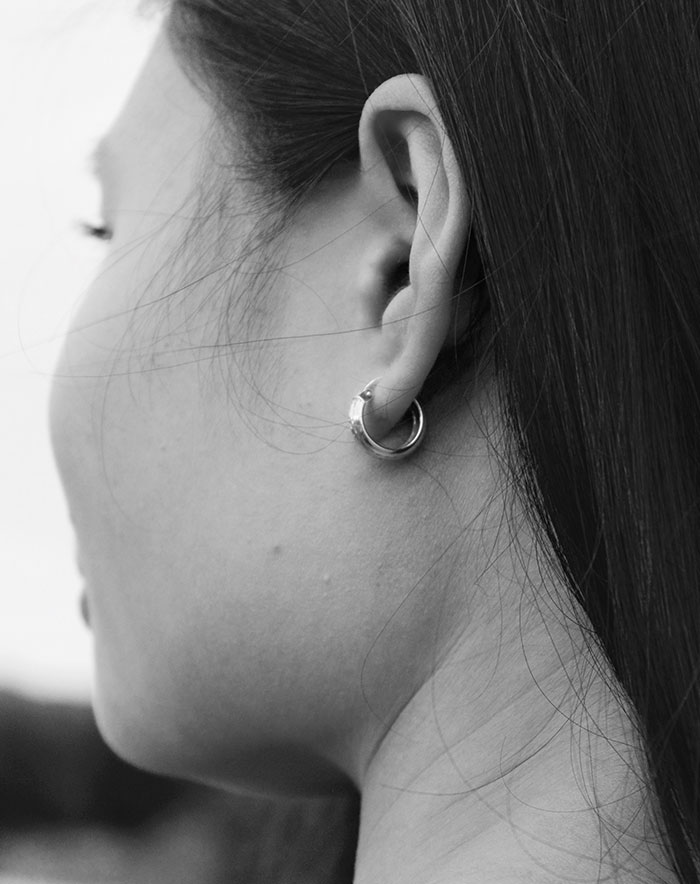 However, getting her parents to learn sign language was proving to be more difficult than she anticipated 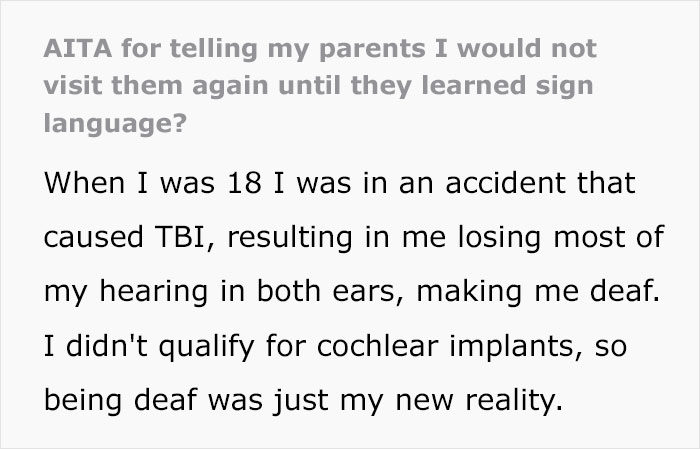 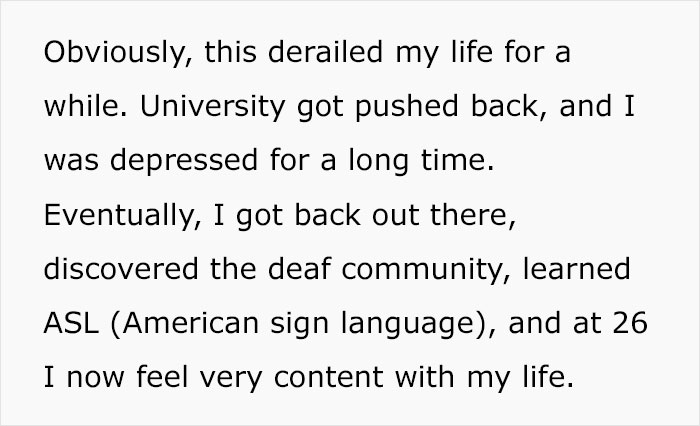 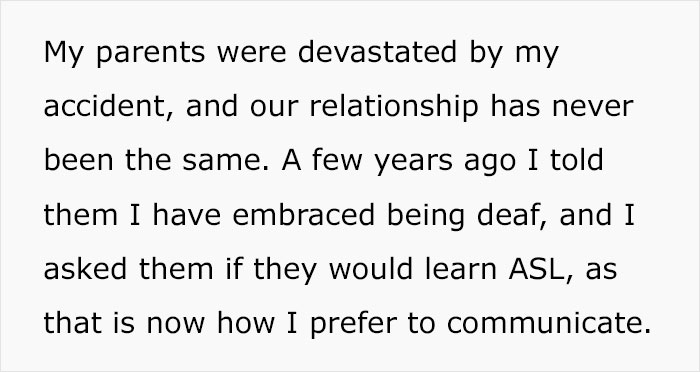 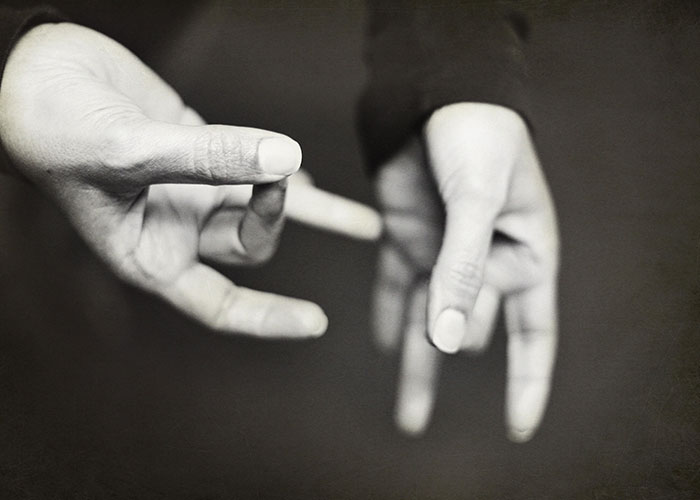 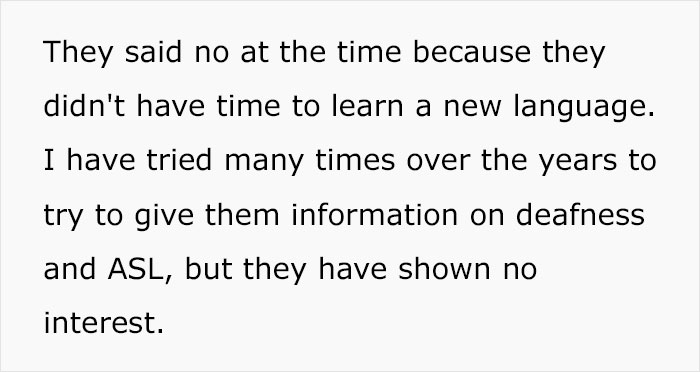 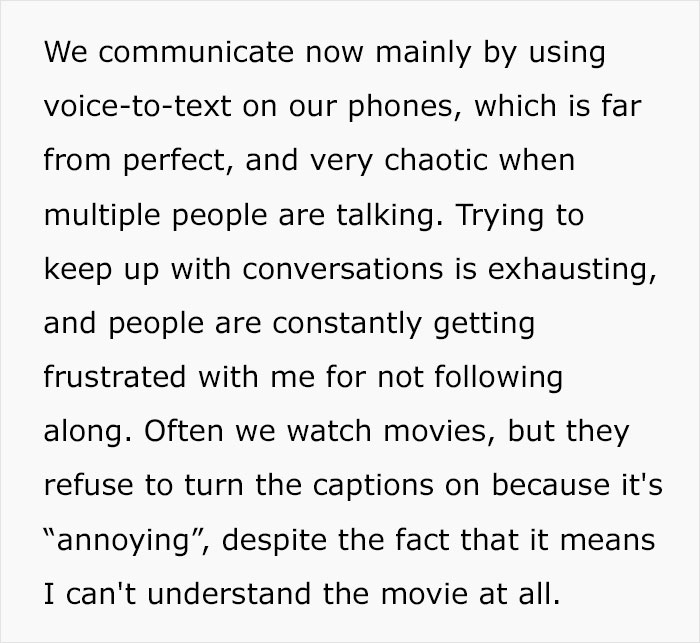 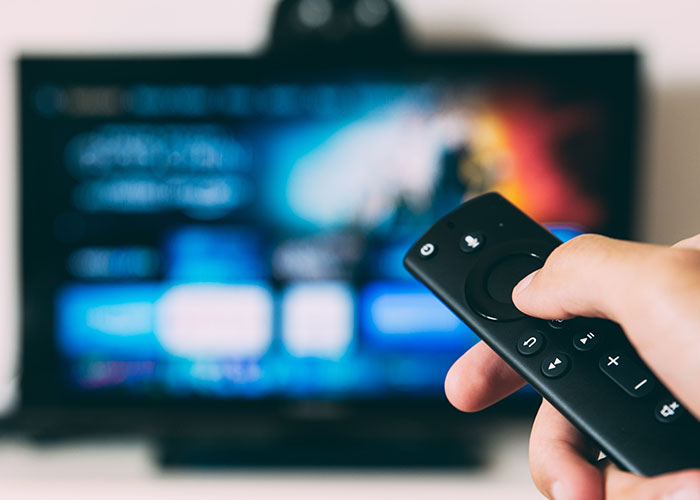 Things finally came to a head over the holidays. The woman gave her parents an ultimatum 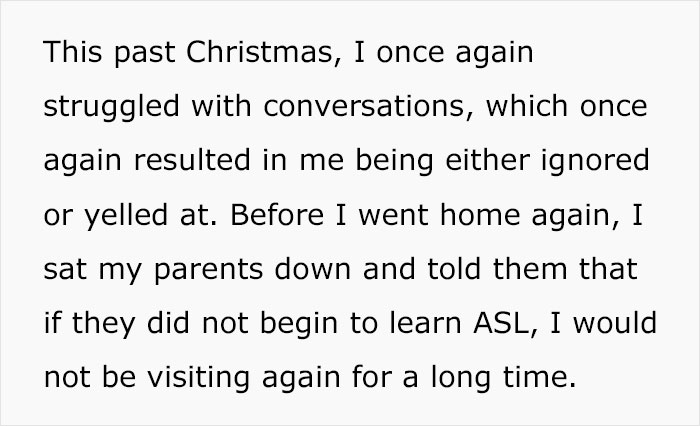 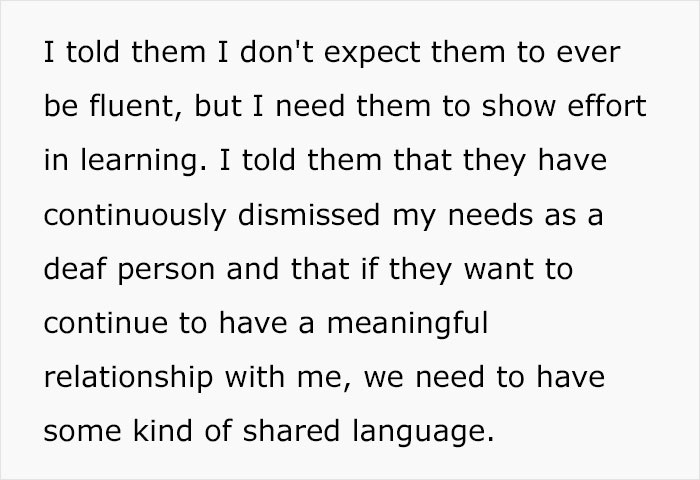 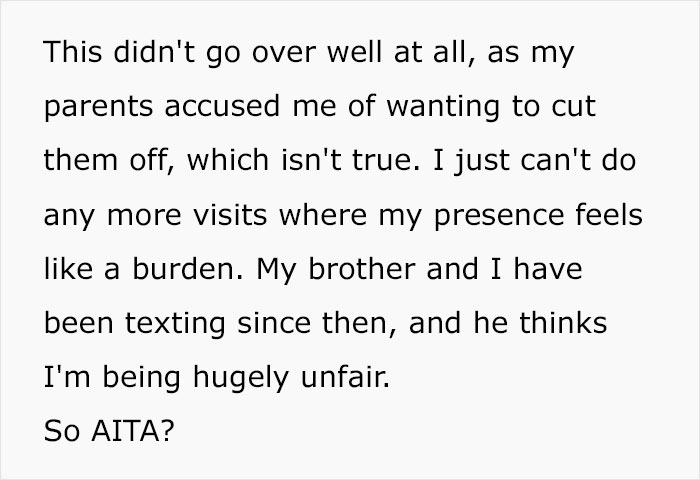 Redditor u/basketsoftough lost her hearing after suffering a traumatic brain injury, also known as a concussion. She had a very tough battle on her hands. Fortunately, she persevered, overcame depression, and now, at 26 years old, feels content with her life. However, one area that she wishes would be different is her relationship with her parents.

Whenever she visits them, they communicate via voice-to-text on their phones. It’s confusing for the deaf redditor. Meanwhile, her parents get frustrated when she struggles to follow all the conversations.

Another issue that really got to us is the fact that her parents would refuse to put on captions when they’re watching movies together.

Things came to a head during the holidays. The redditor finally had enough and stated that she wouldn’t be visiting her parents anymore until they started learning ASL. She’d provided them a lot of information and resources about deafness and sign language over the years. But her parents always felt like it’s too much effort to learn a new language.

Now it seems like her mom, dad, and brother are all against her. However, the vast majority of the AITA community on Reddit thought that she was clearly in the right. But what do you think of the situation, dear Pandas? Is there anything that you would have done differently? What do you think it would take to convince the parents to learn ASL? Share your thoughts in the comments.

How quickly someone learns ASL depends a lot on the person themselves. Someone who enjoys learning new languages or has a lot of free time to dedicate themselves to a new project will obviously pick ASL up a lot quicker than a person who has no interest, very little time, and feels forced.

The Language Doctors write that some sign language classes can take up to six weeks to complete while others are self-paced. This means that there’s a lot of variety and people can adapt their learning pace to their particular lifestyle.

“Overall, it can take several years of regular study and practice to become fluent in sign language. It may take from three months to three years to learn sign language. Moreover, it’s all about your learning goal setting, and it all depends on your end goal,” they explain.

“Likewise, you can continue taking sign language classes for several years if your end goal is to become fluent and expert. Alternatively, you may pick up some basic signs, and it may only take a few months. Remember that individual students have a different learning curve, so don’t get frustrated if you need more time than others.”

According to The Language Doctors, learning ASL isn’t any more difficult than learning a spoken language. And the benefits are very wide. Aside from now being able to communicate better with the deaf and hard-of-hearing wherever you might be in the US, you can be proud that you’ve developed a new skill that can benefit you professionally. What’s more, learning ASL can also sharpen your mind and increase your fine motor skills. However, at the end of the day, the biggest reward would be for parents to talk to their children.

Reddit users were fully in support of the deaf woman. Here’s what they had to say 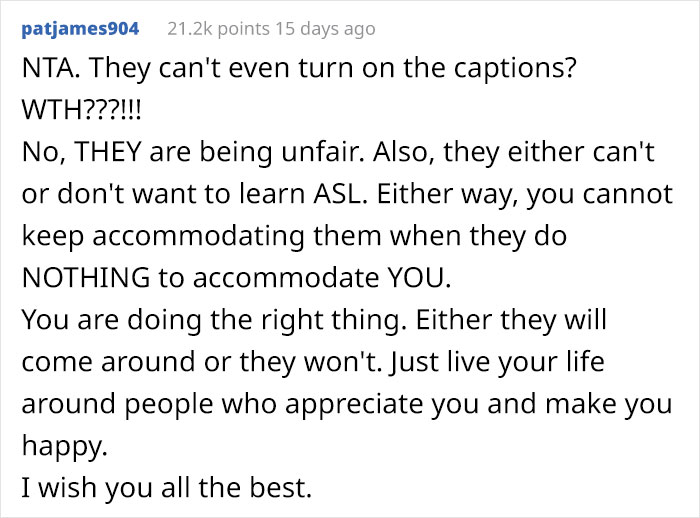 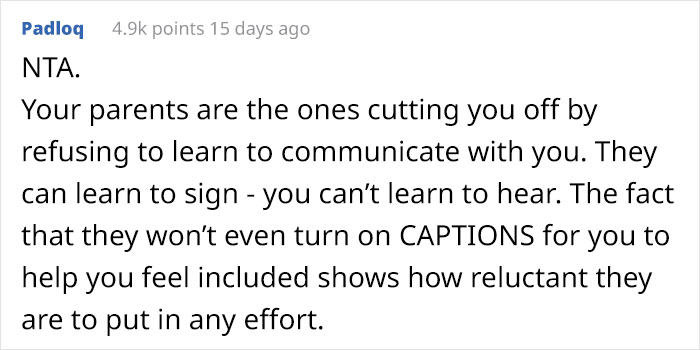 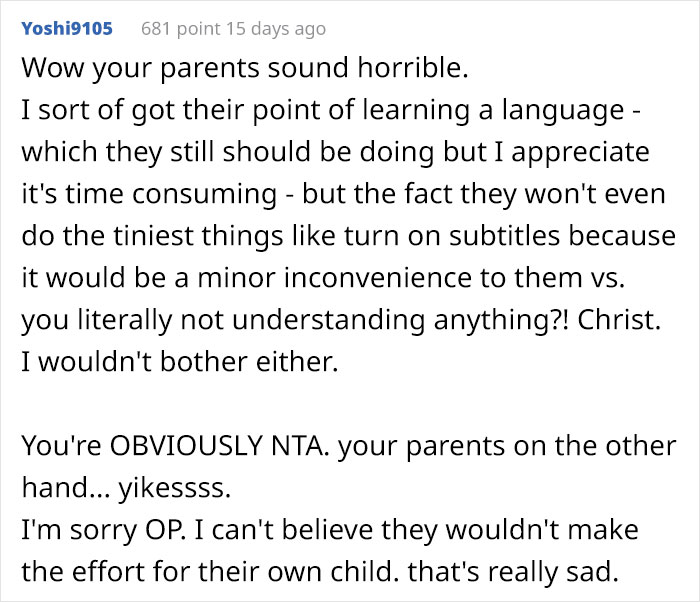 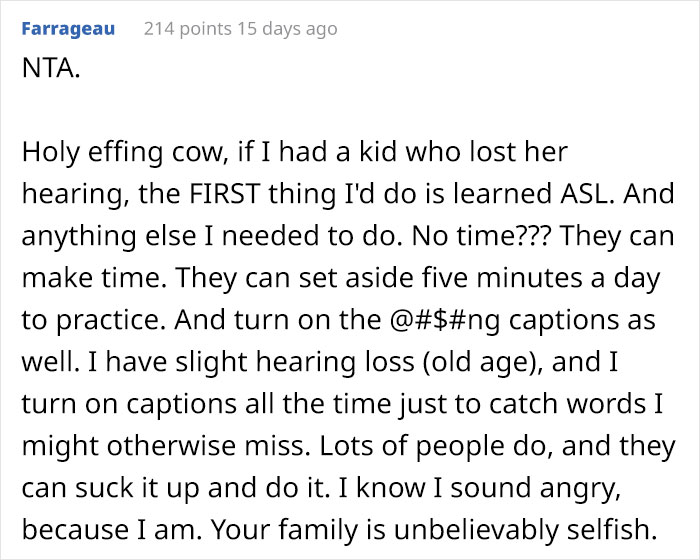 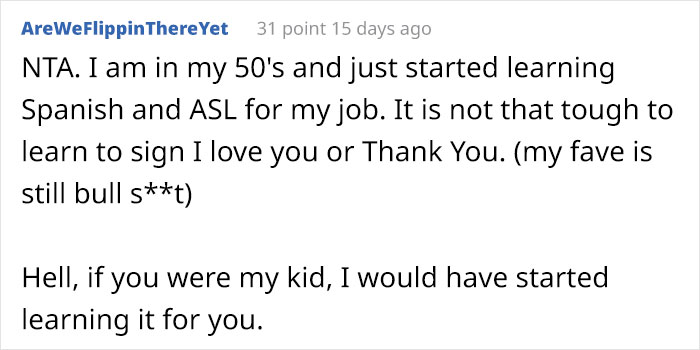 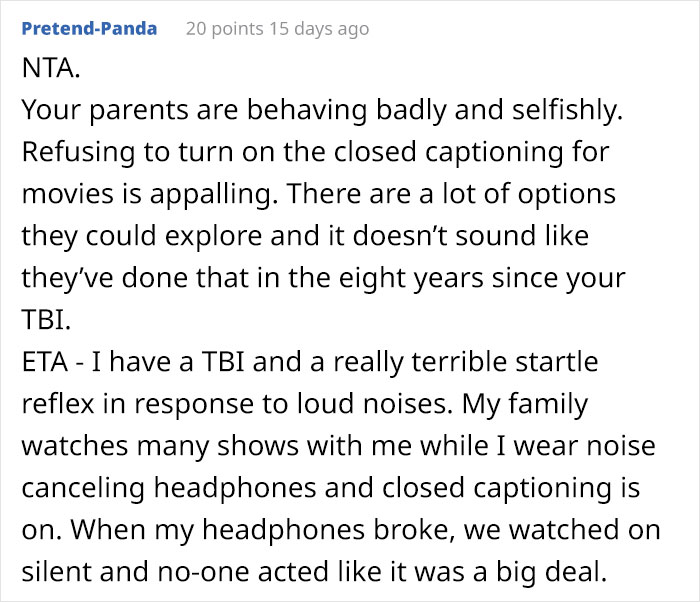 The post Deaf Woman Refuses To Visit Parents Until They Learn ASL, Asks If She’s Being A Jerk first appeared on Bored Panda.