This is one of those objects that I find beautiful in one configuration, yet ugly in another. While beauty is a subjective thing, I wanted to go over the object with you and see if we can come to some agreement about universal aesthetics (if such a thing exists).

Here’s the object in question. It’s a jewelry box, and according to the manufacturer it’s an old design that they discovered in a Spanish furniture maker’s archives and put back into production. 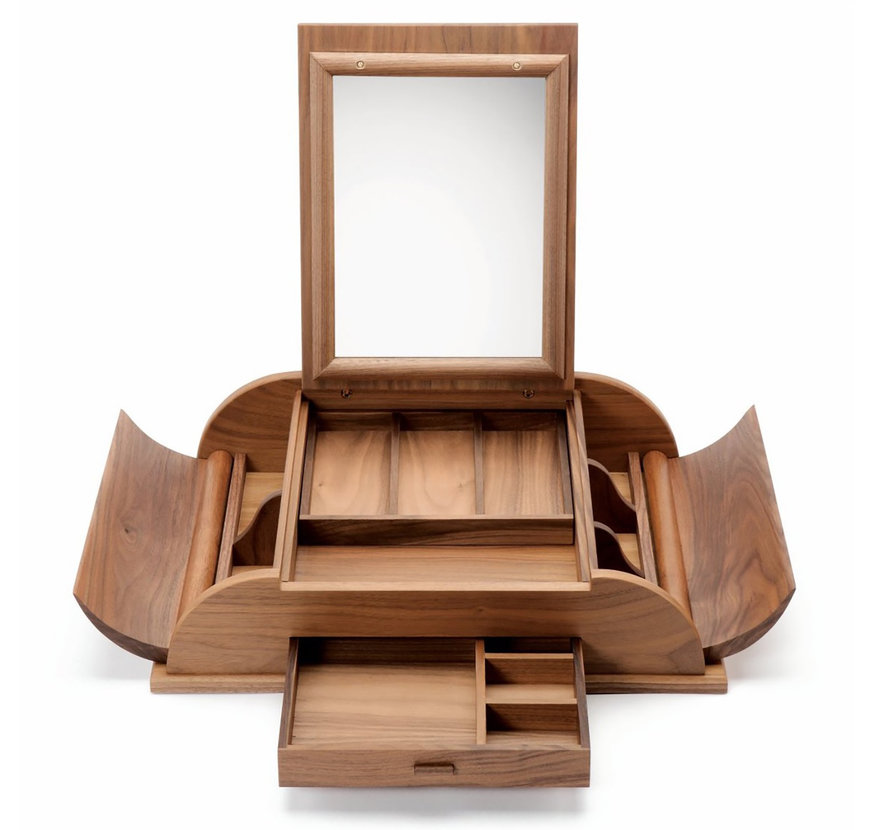 I think it looks great when it’s open. 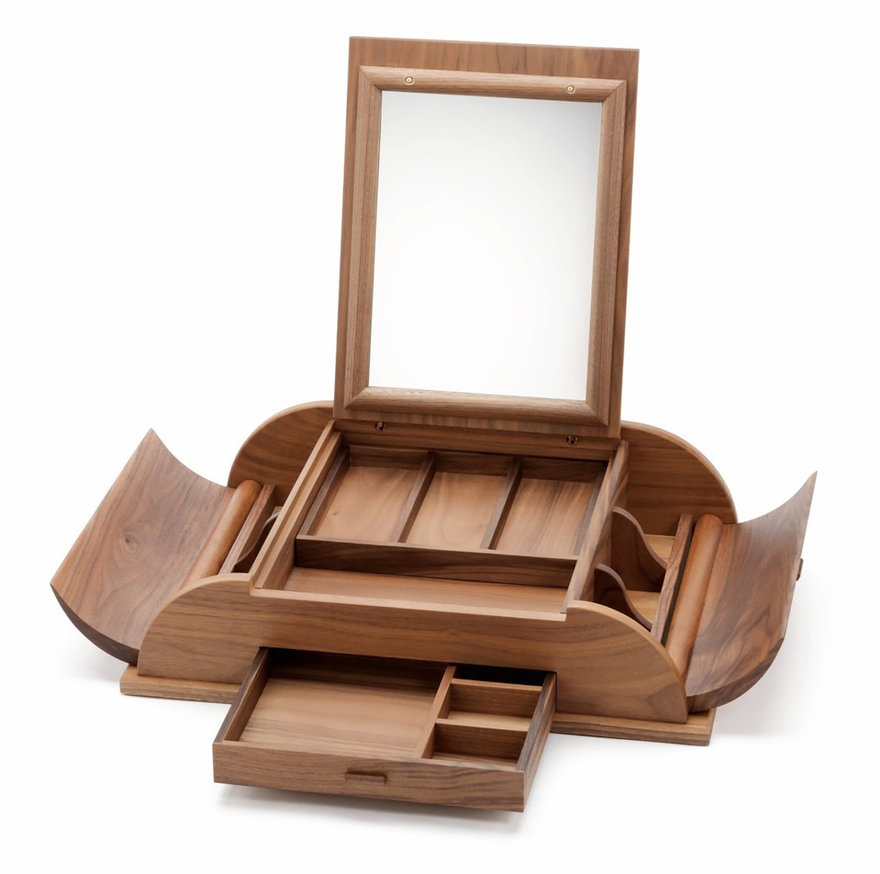 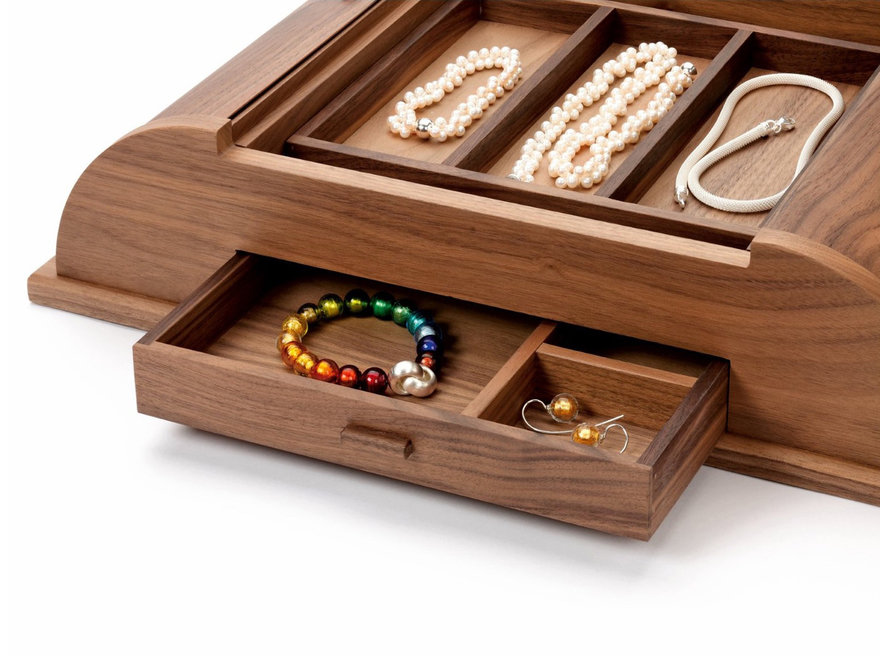 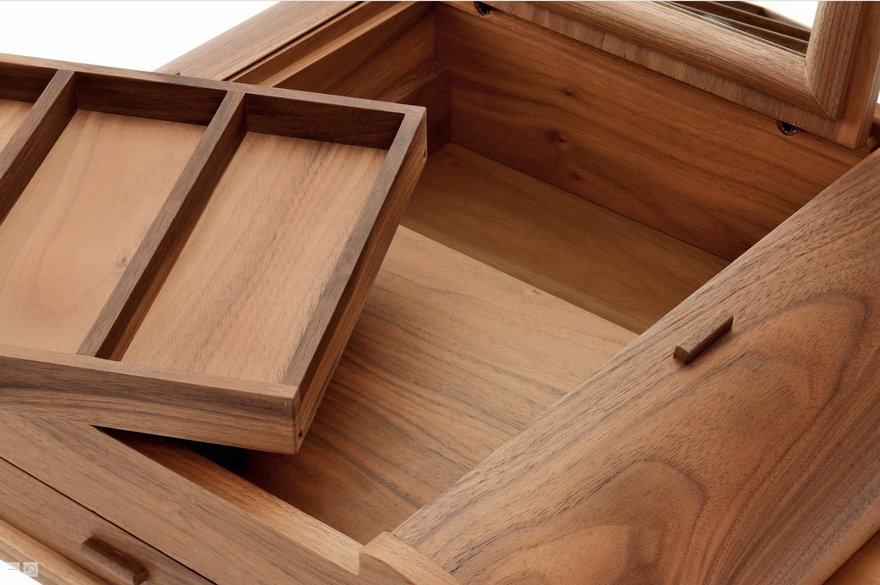 I particularly like the way that they’ve sculpted the side wings. 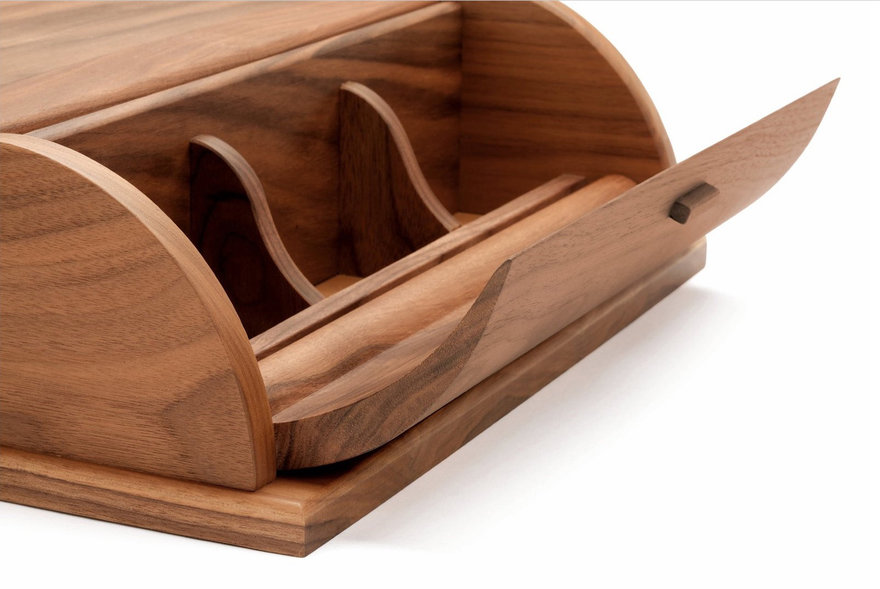 The problems begin for me when it’s all closed up, which is presumably the configuration it would most often be seen in. 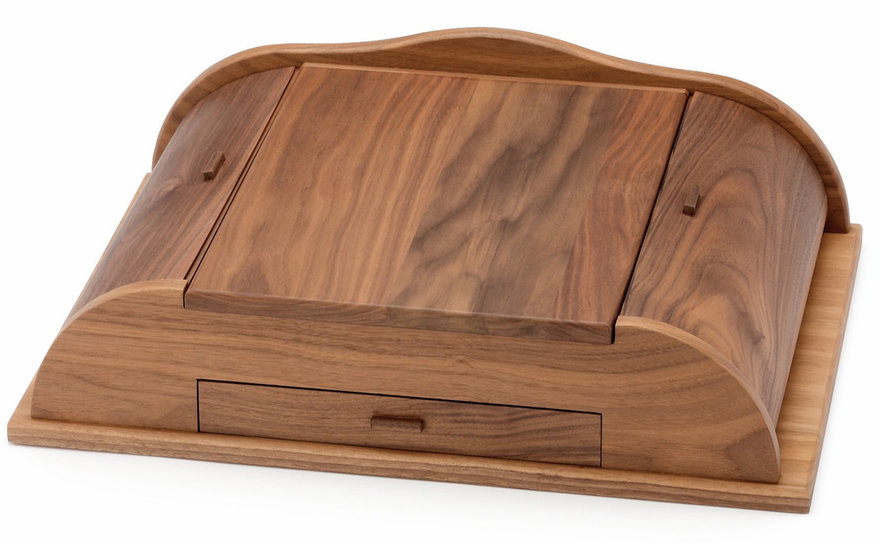 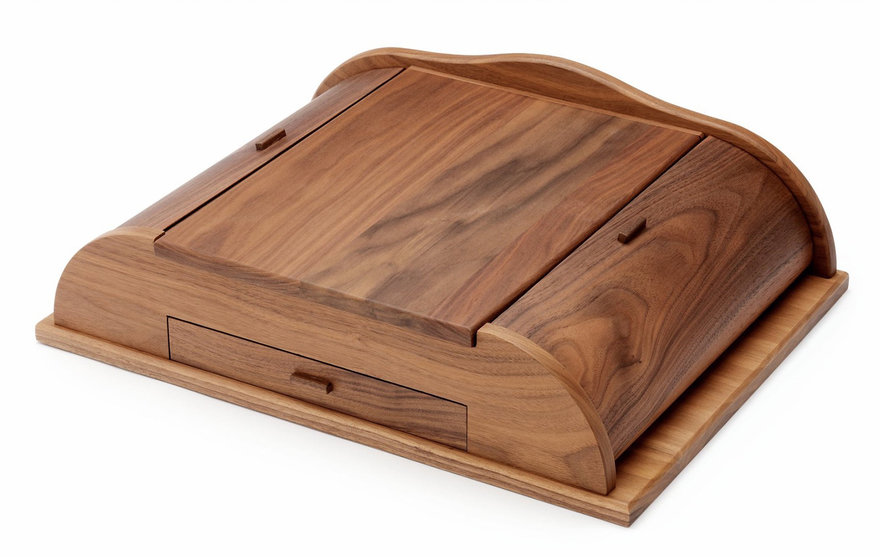 1. I appreciate that this is built primarily out of solid wood (except for the bottoms of the drawers, which the manufacturer says is made out of plywood), but: 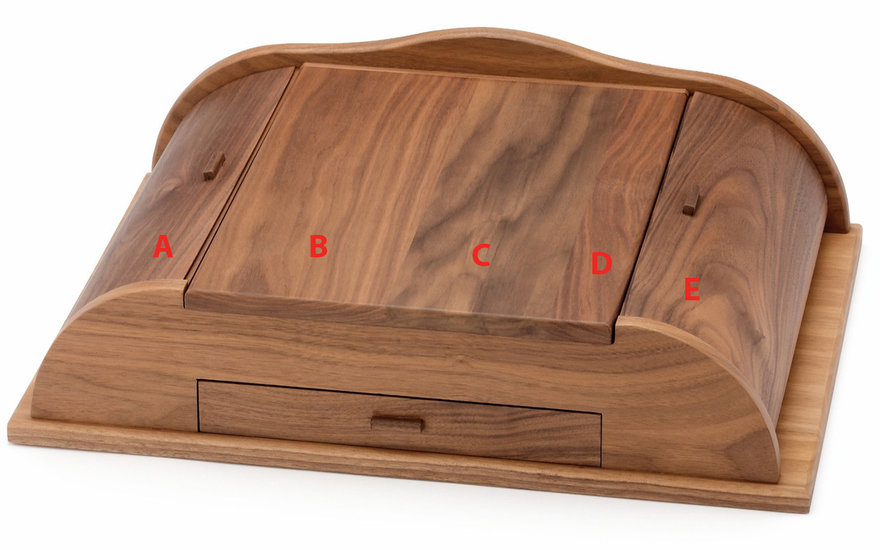 I find the discontinuity of the grain (pieces A thru E), particularly the change in color tones, jarring. Obviously this will differ in each one they produce, but the fact that this is the one they chose to photograph tells me color matching is not a priority. 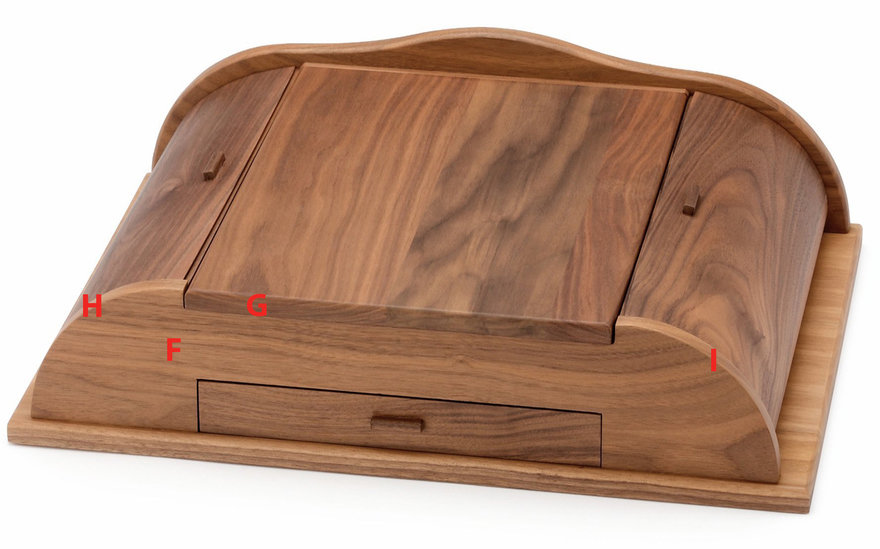 2. I would prefer that the front face of this be all surface F, so that we are not sending endgrain G. I realize that G is left exposed and protruding in order to provide finger purchase to open it, and I typically prize function over aesthetics, but not in this case. To me, curves H and I deserve not to be broken by the seams there. I might have reduced the lid protrusion to a narrower fingerhold that sets into a slot, rather than having the entire width of the lid exposed like that. 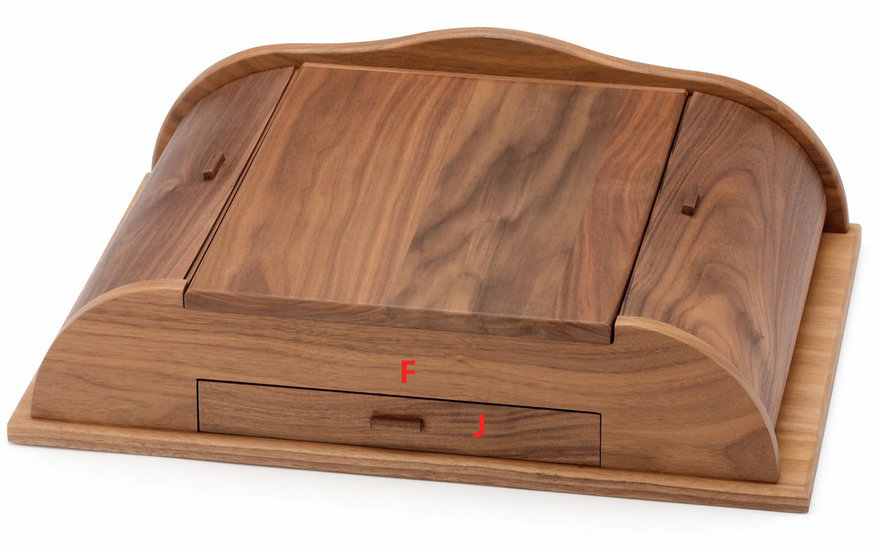 3. I find the difference in grain between surfaces F and J jarring as well. I realize there is no practical way to cut F and J from the same board, but I might have gone with a markedly different, complementary tone between the two rather than have them so close in tone that you notice the difference in grain. 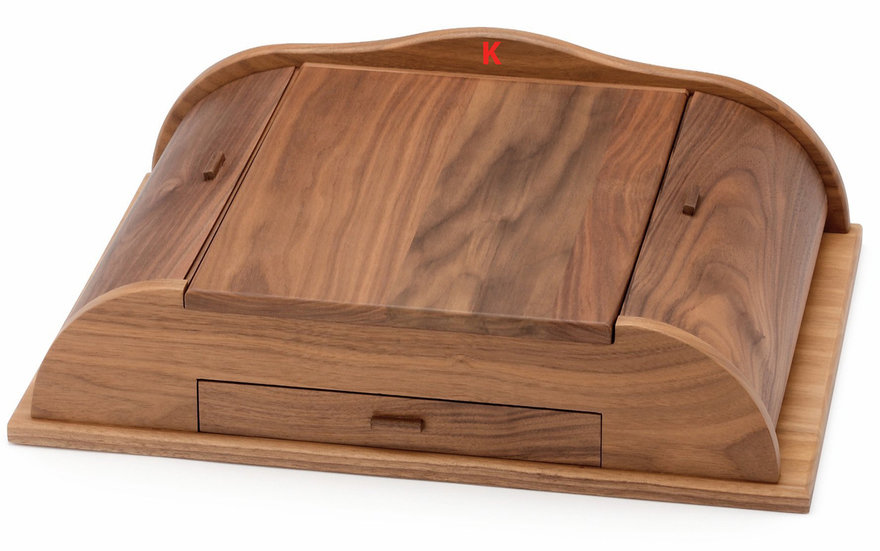 4. I could take or leave this rise, K. I think it breaks the line of that “headboard” unpleasantly, but I can see how some people would like it.

All of this criticism aside, I am glad that they did go to the trouble to make it from solid wood, as problems 1 and 3 could easily have been solved with veneer-over-plywood, which I am really growing to hate.