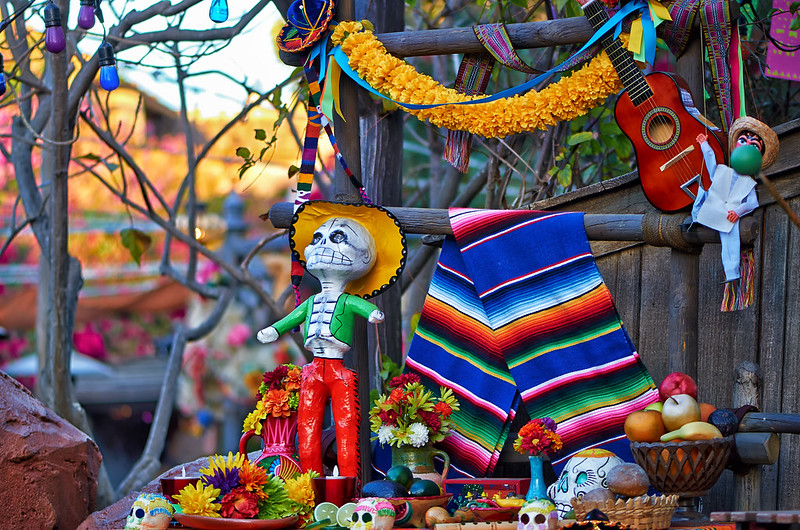 Throughout history, cultures across the globe have adopted creative ways to deal with death. In ancient China, they crafted funerary sculptures. During the Dutch Golden Age, artists touched on mortality in their still-life paintings. And, in modern Mexico, people celebrate Día de los Muertos, a colorful holiday dedicated to the dearly departed.

Though this festival has evolved over centuries, it remains one of Mexico’s most important events. Here, we explore the vibrant history and distinctive traditions of the Day of the Dead in order to understand its enduring significance.

What is Día de los Muertos?

Día de los Muertos (also known as Día de Muertos) is a Mexican holiday. The celebration occurs annually on October 31, November 1, and November 2, and is intended to honor those who have died. 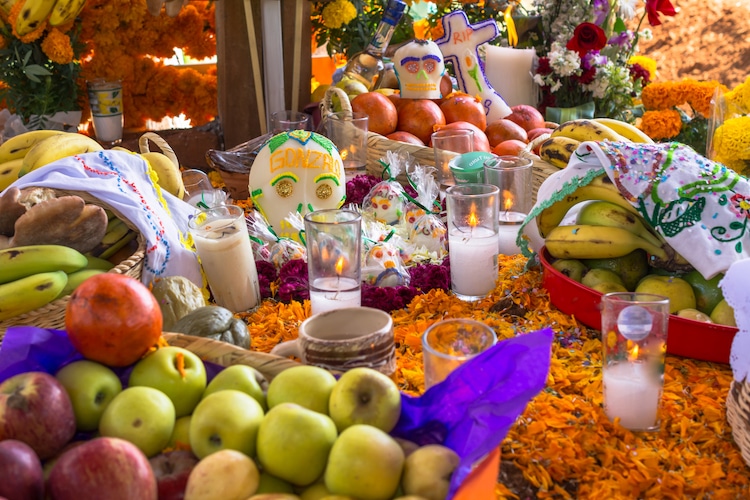 Day of the Dead in Michoacan, Mexico (Photo: By Jose de Jesus Churion Del via Shutterstock)

Though the specific traditions and rituals involved with the Day of the Dead vary from region to region, the celebration generally revolves around the creation of an altar, which participants fill with stylized skeletons, food, and other offerings. These alters are dedicated to deceased loved ones and are created to aid them in the afterlife.

History of the Holiday

Like many modern holidays, The Day of the Dead has been shaped over the course of hundreds of years. Rites and rituals reminiscent of The Day of the Dead can be traced back to the Post-Classic period (1300 to 1521) in Pre-Columbian Mexico. During this time, the Aztec Empire flourished, bringing with it a treasure trove of traditions.

Like many Mesoamerican peoples, the Aztecs viewed grief as disrespectful to the dead. Rather than mourn the loss of loved ones, they opted to celebrate their spirits, culminating in the earliest edition of the Day of the Dead.

During this month-long festival, the Aztecs welcomed visits from beyond the grave and worshipped Mictēcacihuātl, the goddess of the underworld. Fittingly, this mythological figure has historically been known as “The Lady of the Dead.” 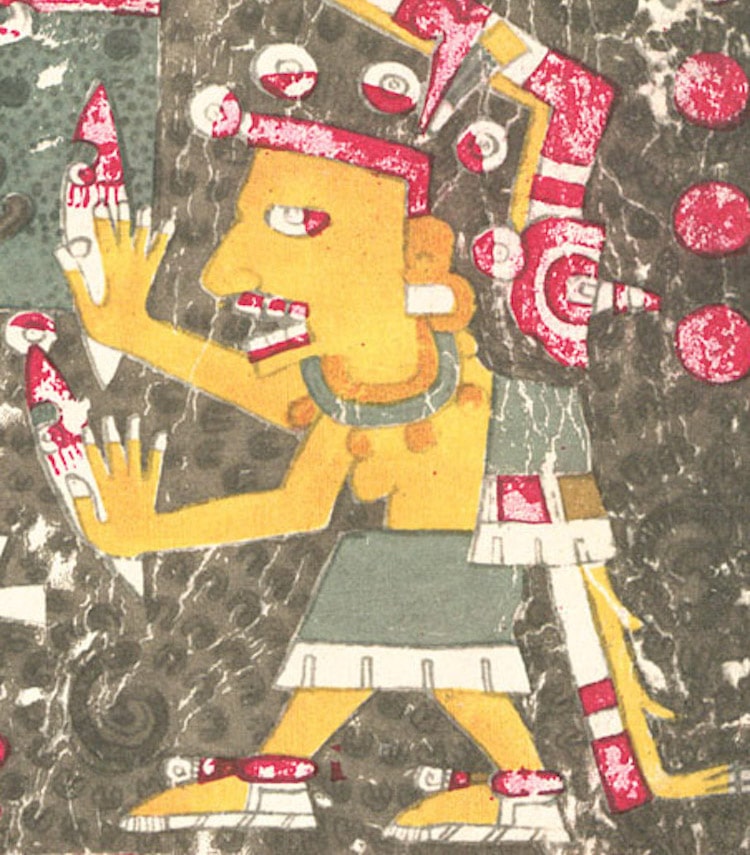 Originally, this celebration occurred in August, the ninth month of the Aztec calendar. However, Catholic influences brought by conquistadors in the 16th century prompted a shift to its present date.

Following Spanish colonization, the Day of the Dead was gradually influenced by another holiday honoring those who have died: Allhallowtide. Inspired by Pagan harvest festivities, this three-day fete comprises All Hallow’s Eve, or Halloween, on October 31, All Saints’ Day on November 1, and All Souls’ Day on November 2.

This Catholic influence altered the religious aspect of the festival, though it remains rooted in Aztec mythology. For example, La Calavera Catrina—a secular female skeleton character that has come to symbolize Día de los Muertos—was inspired by Mictēcacihuātl. 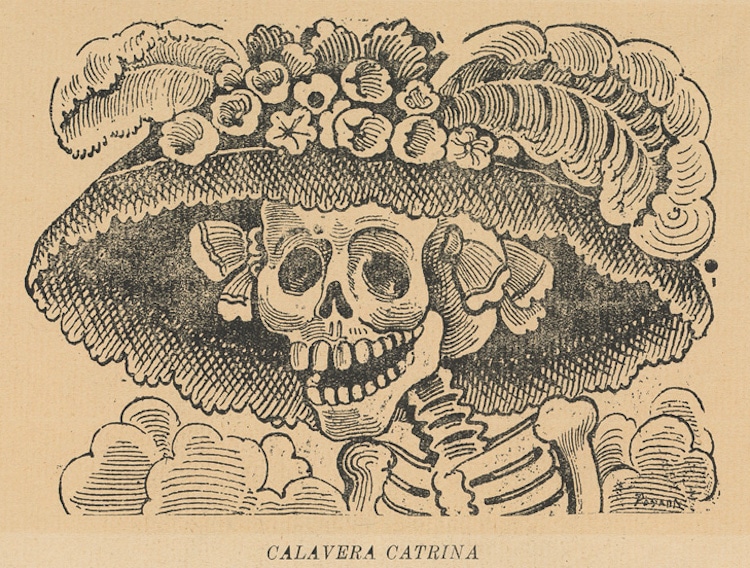 Ultimately, a blend of Catholic and Pre-Columbian influences is evident in the festival, and is made most prominent by the ofrenda. 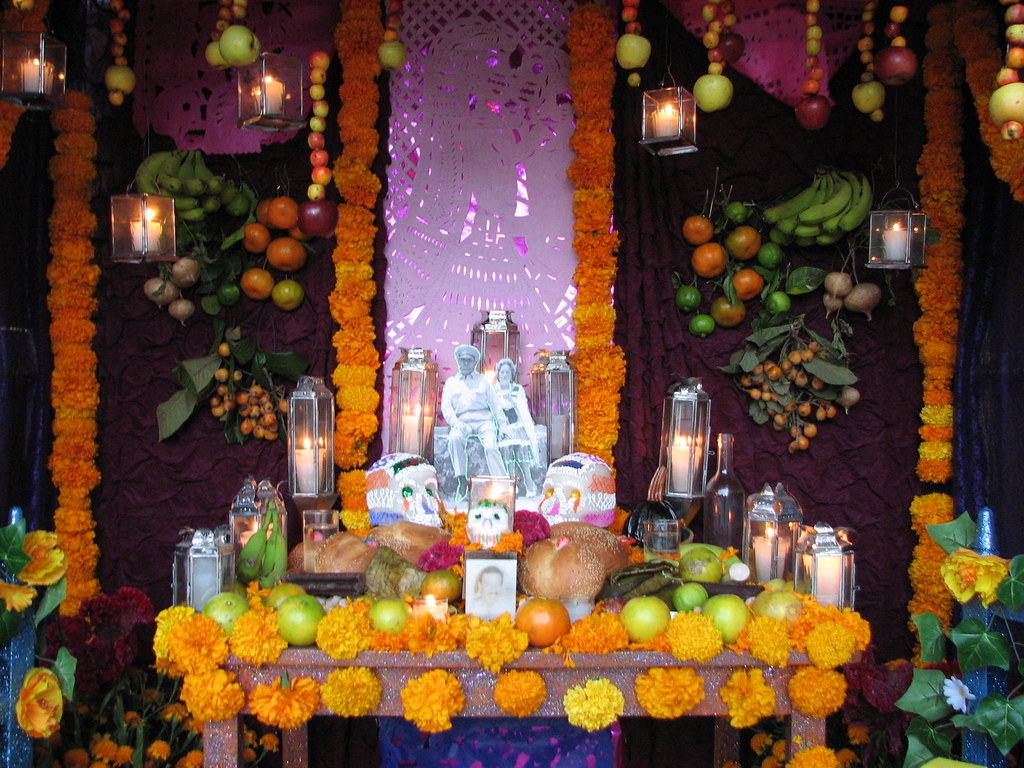 On the Day of the Dead, an ofrenda, or offering, is placed on a ritual altar. Central to the celebration, these altars are found in private homes, cemeteries, and churches and welcome the dead back to earth for the three-day event.

While ofrendas vary, a traditional altar will features these elements:

Though often compared to Halloween, the Day of the Dead does not revolve around mischief or morbidity. Instead, it focuses on color—an aesthetic illustrated by its festive decorations.

Made out of Technicolor tissue paper, papel picado (or “chiseled paper“) is a flag-like folk art evolved from a Pre-Columbian version made out of tree bark, which was used by the Aztecs to compile codices and adorn religious sites. 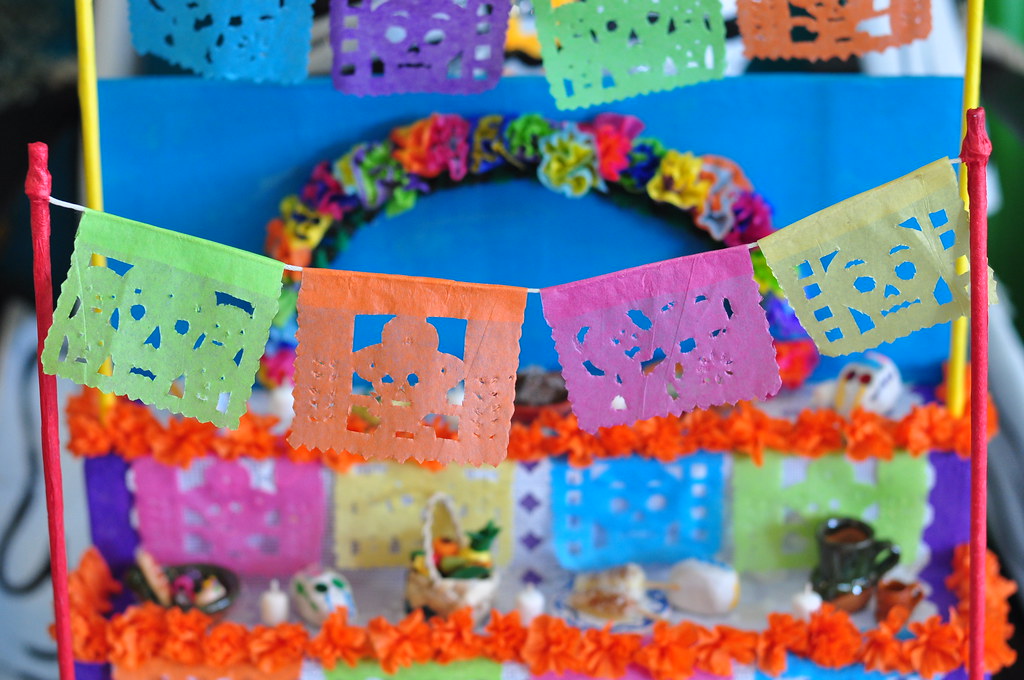 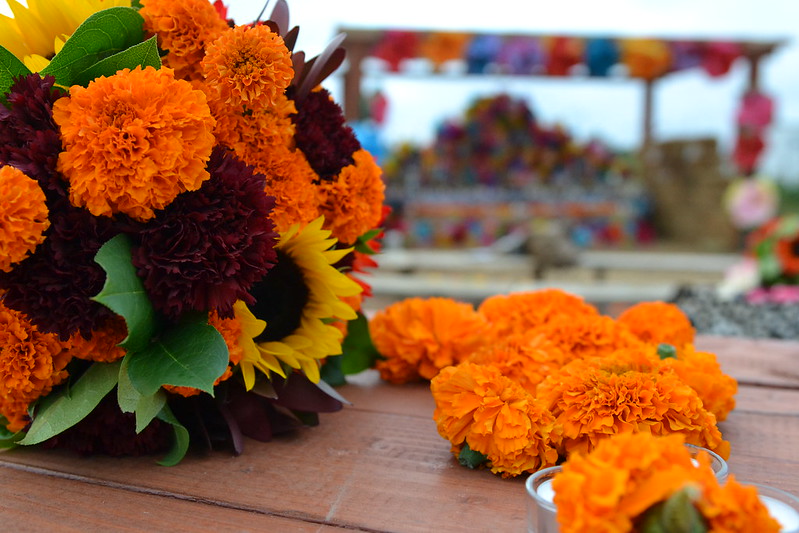 These colorful skulls (known as calaveras) made out of molded sugar paste, are another staple of Day of the Dead decor. These small skulls are exquisitely decorated with motifs like flowers and spiderwebs and often feature names of the dead written in foil or icing on their foreheads.

Some calaveras feature inedible adornments, like beads, sequins, and feathers, while others are made to be eaten. 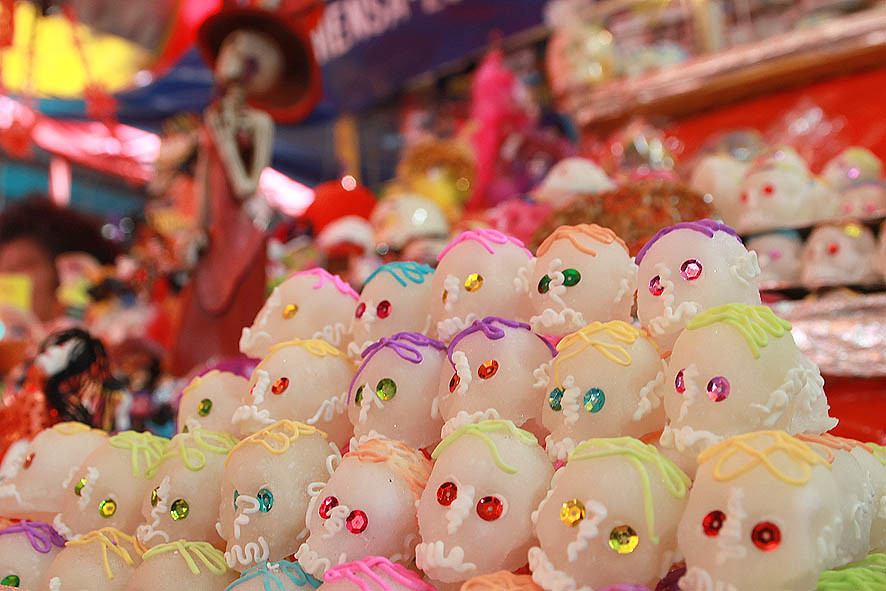 Day of the Dead altars are typically covered in edible offerings enjoyed by the deceased person in their previous life. Additionally, most ofrendas will also include pan de muerto and spirited drinks. 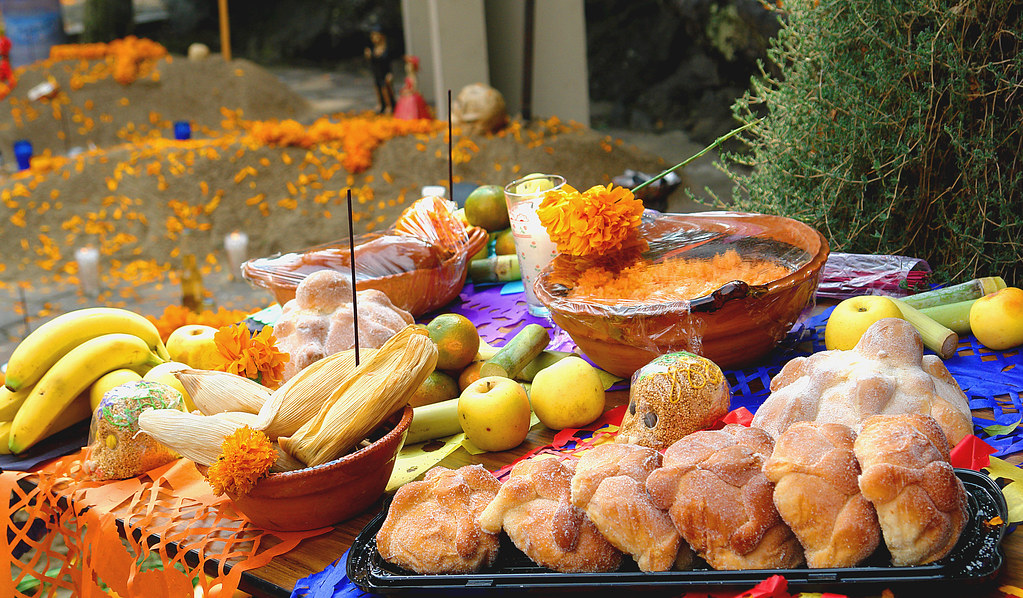 This “bread of the dead” is a type of sweet roll. It is adorned with bone-like decorations, and is typically flavored with anise seeds and orange zest. Like other offerings of food, it is believed that the visiting spirits absorb and enjoy the essence of the Pan de Muerto, though it is the living who physically consume it. 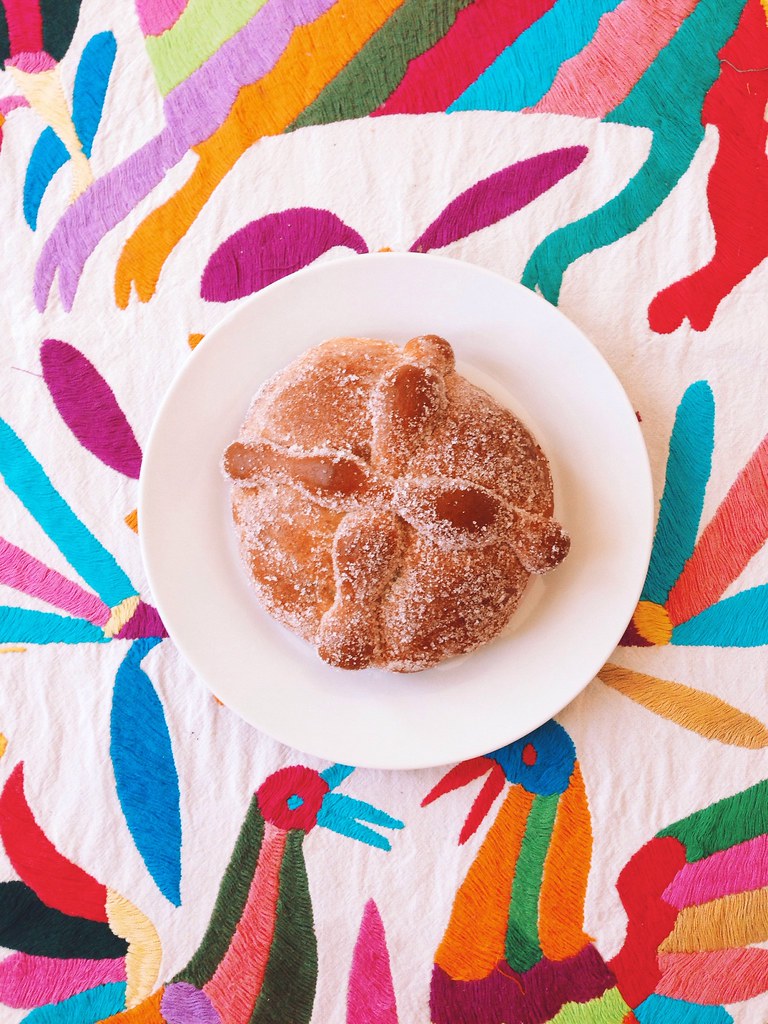 To help the spirits relax and enjoy the festivities, people will often offer alcoholic beverages like Tequila, Mezcal, and Pulque, a drink made out of fermented agave sap. 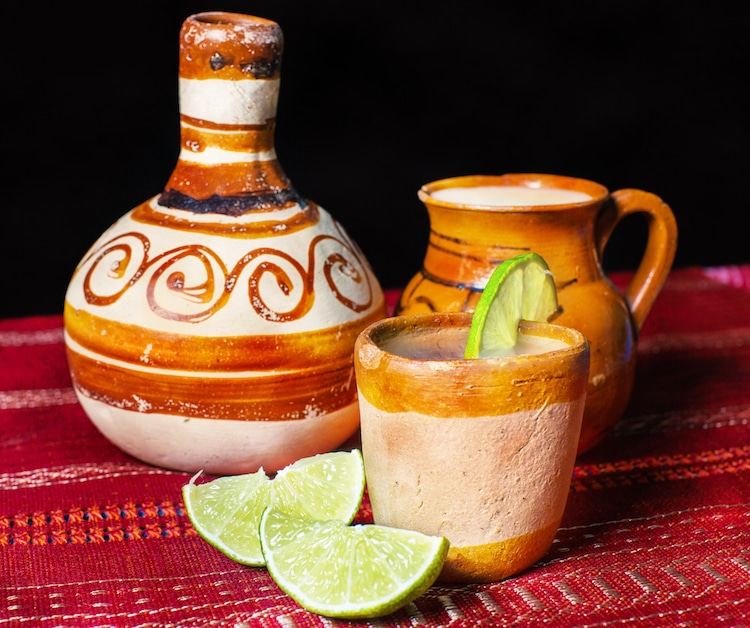 Most altars feature photographs that identify who each ofrenda is dedicated to. Though often a family member, the subject can be a friend, celebrity, or even a beloved pet. 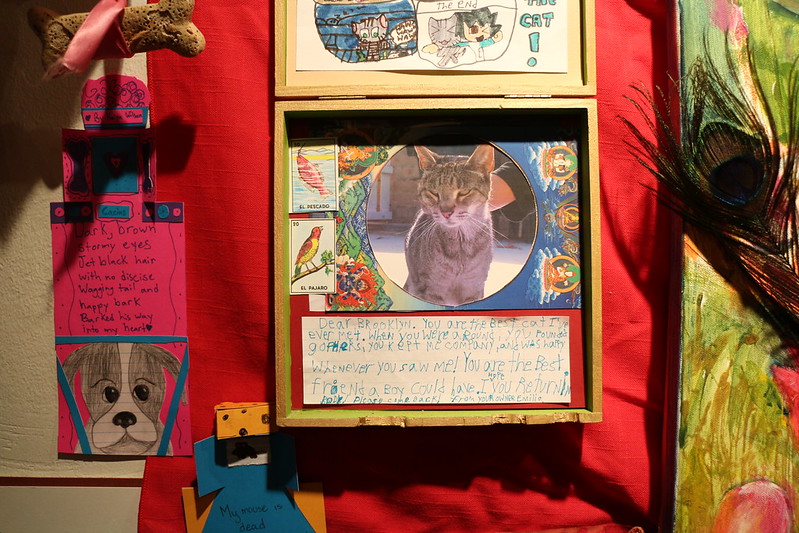 Candles are used to memorialize the dead and to help them find their way to the altar. Sometimes, they are placed in a cross formation, both to evoke the crucifix and to serve as a compass rose so they can orient themselves. Other times, however, their arrangement is ambiguous. 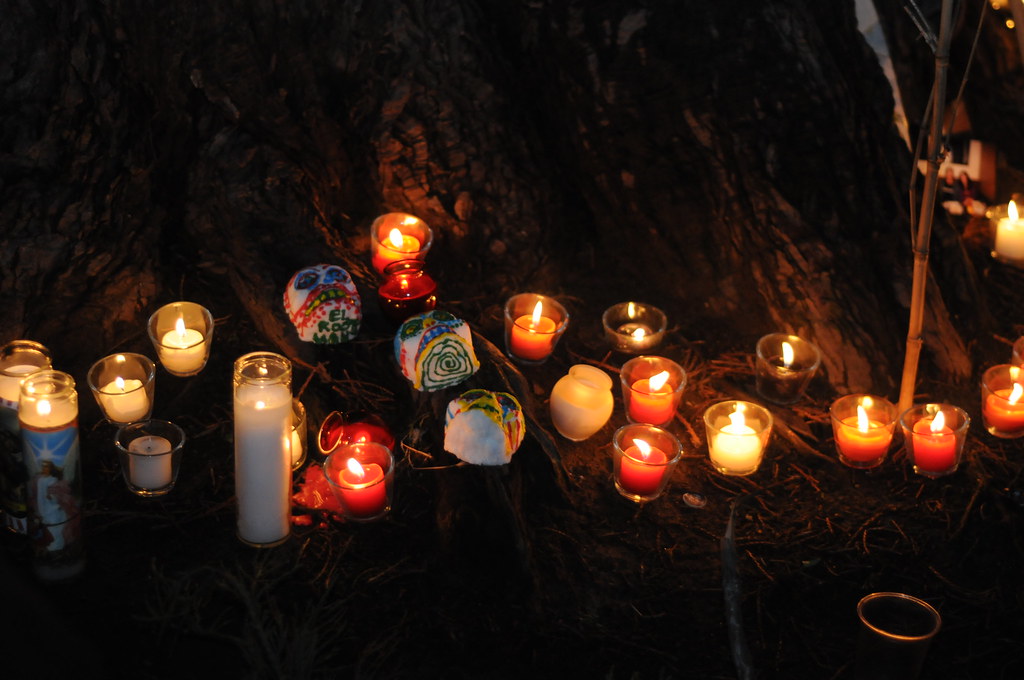 Trinkets, Toys, and Other Objects

To add a personal touch to the altar, participants may add objects owned or previously enjoyed by the dead, including clothing, cigarettes, and toys. Statuettes of saints and other religious figures are popular, as are papier–mâché and clay figurines of playful skeletons. 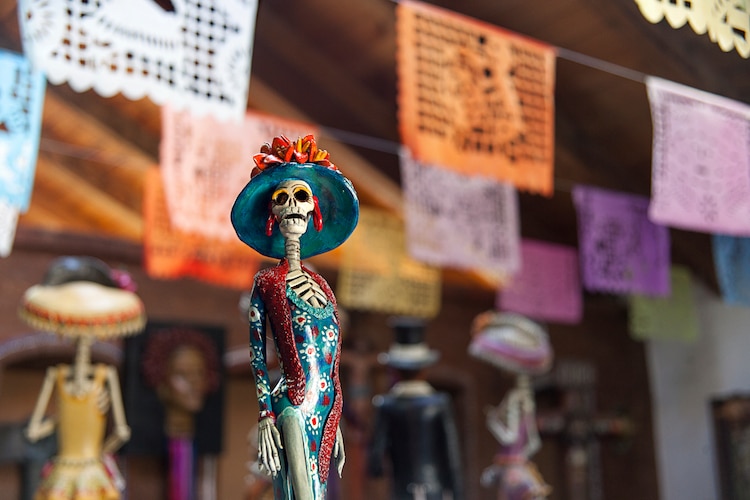 Day of the Dead in Michoacan, Mexico (Photo: DAVID PANIAGUA GUERRA via Shutterstock)

The Day of the Dead remains prevalent in contemporary culture—both in Mexico and beyond. In addition to making alters and attending city-wide festivals, people today often celebrate Día de los Muertos by making themselves up to look like Calaveras, a look that has also inspired countless Halloween costumes. 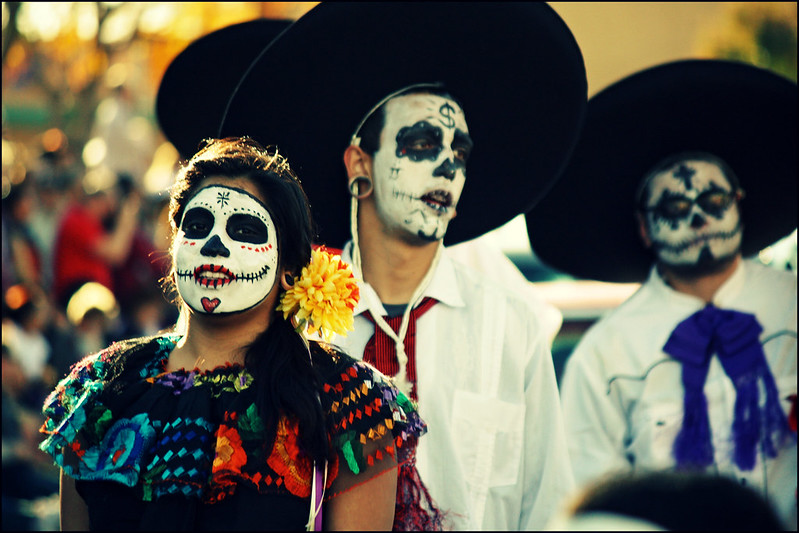 In 2008, the holiday was even added to UNESCO’s Representative List of the Intangible Cultural Heritage of Humanity, ensuring its enchanting legacy for years to come.

The post Día de los Muertos: How Mexico Celebrates Its Annual “Day of the Dead” appeared first on My Modern Met.