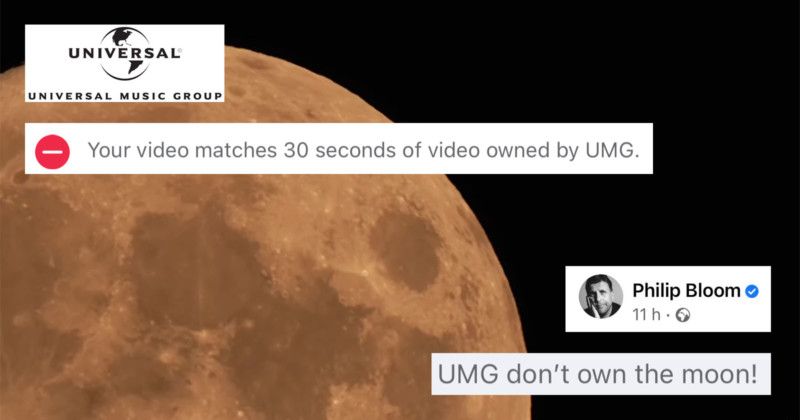 Corporations, ugh. Universal Music Group (UMG) has blocked the video of British filmmaker Philip Bloom, claiming copyright to his shots of the Moon. Bloom filmed the Moon during sunset in Greece. When he uploaded his video on the Internet, he was sent a  copyright infringement claim by UMG, with the notice that his footage matched 30 seconds of video owned by the company. What in the world? Does UMG own the Moon now? PetaPixel has the details:

Bloom says he’s baffled by the fact that a simple shot of the Moon could be flagged for copyright infringement.

“It’s utterly ludicrous, I mean it’s a shot of the moon!” he says. “I hadn’t realized they owned the licensing rights to it. I dare not upload a sunset shot as they’ve probably bought the sun too!

“It doesn’t affect me in any way other than it being annoying and ridiculous, but it does raise questions about the AI being used on Facebook… unless they actually have bought the moon? If so I bet that wasn’t cheap!”

Update on 8/27/21: Philip Bloom says that after the publication of this story, UMB has released the claims on his video along with several others.