If you’ve ever planned a wedding, you’ll know the struggle of having to decide who gets invited, who gets to be a groomsman or a bridesmaid, who is just there for the ceremony and whatnot.

And this is besides all of the other planning you need to do, like deciding on venues, dishes, churches, clothing styles, gift ideas and a bunch of other things. Oh, and don’t forget that this has to be a team effort as there are two people involved in the decision making. See how complicated it got real quick?

Well, one Redditor shared how she played a huge role in making her brother’s wedding a reality but was not really involved in it at the same time, which was upsetting.

Planning a wedding is always a challenge, and a certain kind of family drama is never helpful 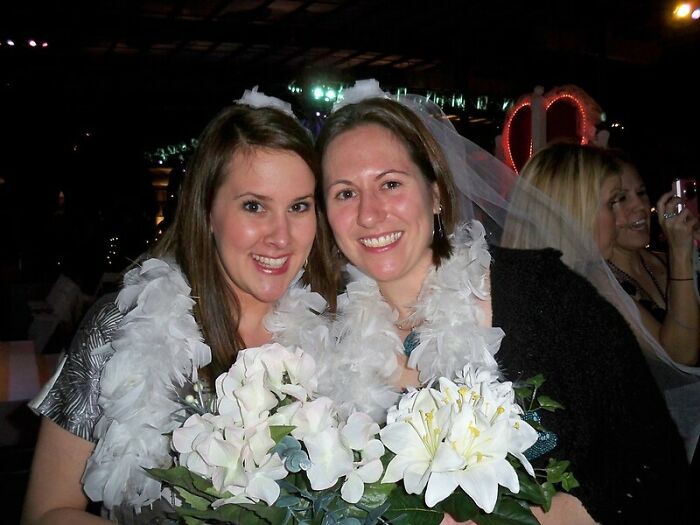 Reddit user u/Downtown-Bowler-8987, with whom Bored Panda got in touch, recently shared a story with the r/AmITheA-Hole community, asking if she is wrong to feel upset for not being involved in her brother’s wedding, despite being the one who’s paying for it.

“I turned to AITA because I’m a longtime reader and I’ve agreed with AITA posts in the past that say gifts should be given without strings attached. I didn’t know if I was attaching strings or if it was reasonable,” OP explained why she ended up sharing her story with Reddit in the first place.

A woman turned to the Am I The A-Hole community for some perspective, trying to understand if she’s wrong to feel upset about not being asked to be more involved in her bro’s wedding, despite paying for it 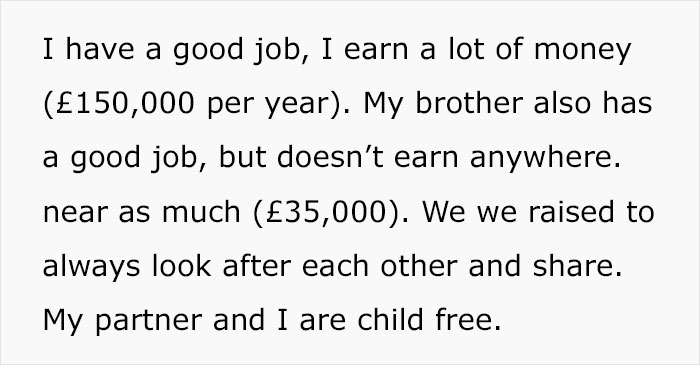 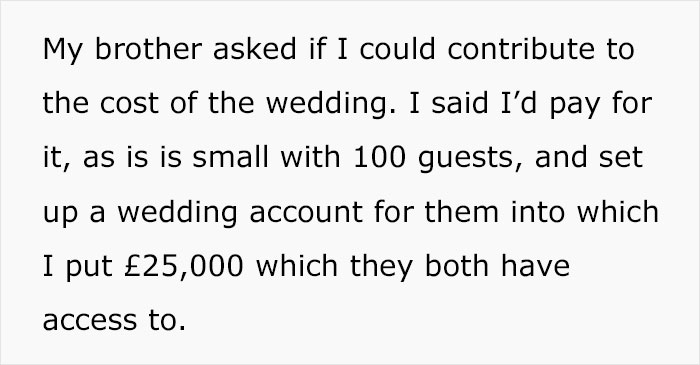 The situation is a bit more complicated than that, though, but in a nutshell, OP is former military and now a well-off pilot earning roughly £150,000 a year (US$205,800) who was raised, together with her younger brother, to share and help each other out. The brother earns significantly less, £35,000 or US$48,000, and since they have no parents, OP felt like she ought to help out. She has helped out on numerous occasions before, and doesn’t mind doing it again.

However, this time around, her brother asked for financial help, and she pledged £25,000 (or nearly US$35,000) but she felt weird for not being involved in any of the decision making. Heck, she wasn’t even a bridesmaid, nor a maid of honor, but simply a guest, while the sister-in-law’s family were super involved in everything. 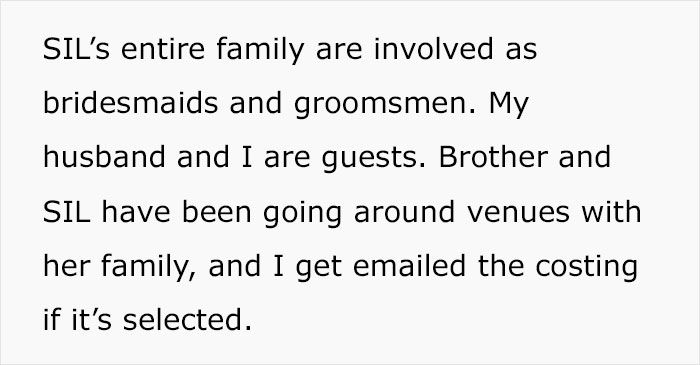 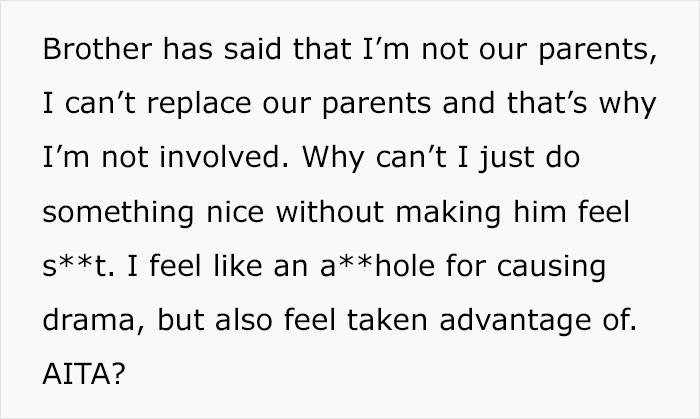 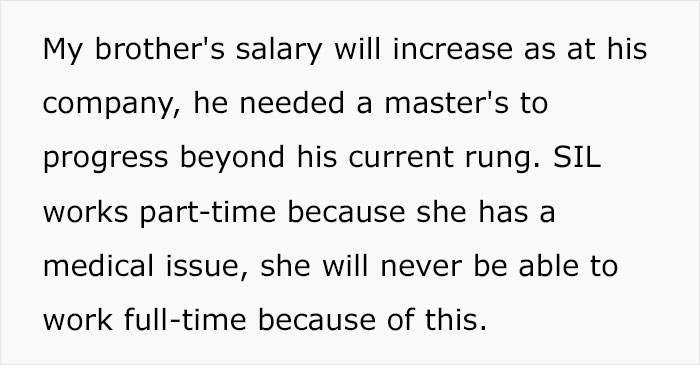 At this point, she felt like an ATM. When she first confronted her brother about it, he said that she’s not their parents, she can’t replace them, and hence she’s not involved, when she just wanted to do something nice without making the brother feel bad. 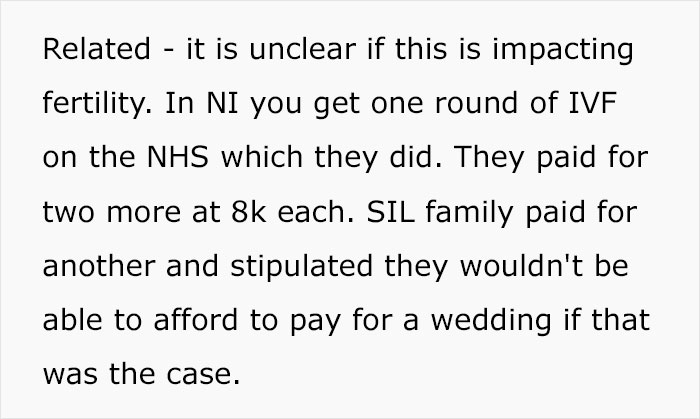 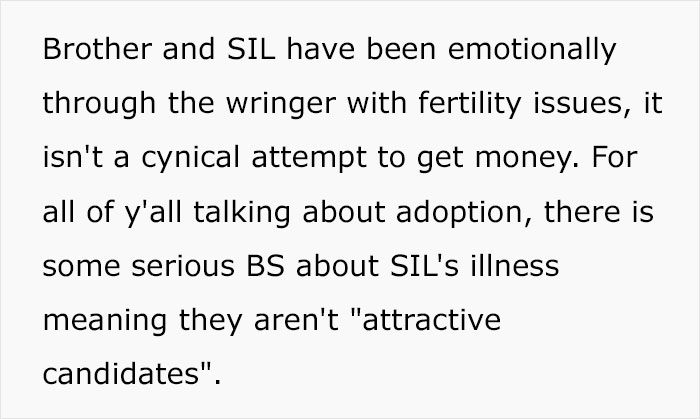 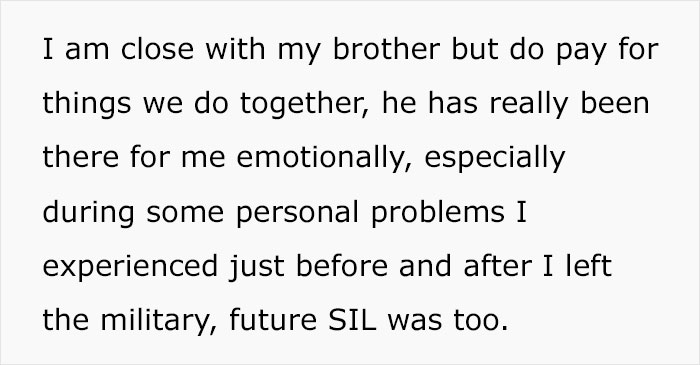 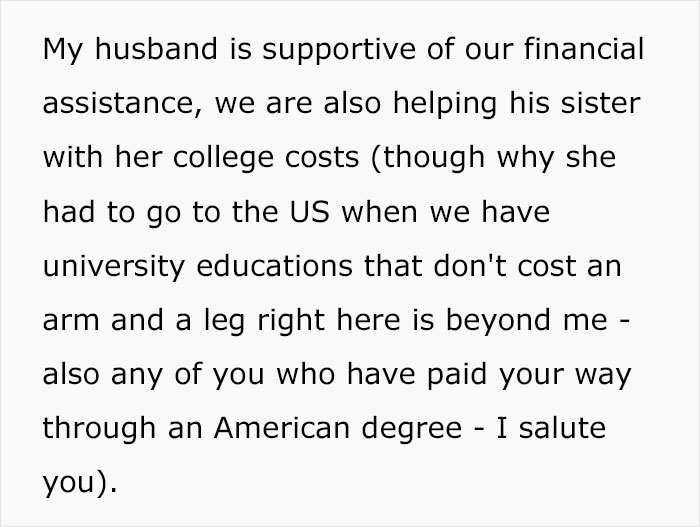 Originally, the post ended there, but people kept inquiring, which prompted several updates. The first one clarified that this was all in the UK, the salaries are good given this context, she explained her professional background, and how much she has helped them out already.

OP also highlighted that it’s not a one-sided relationship, the brother has been there for her on an emotional level, they are close. 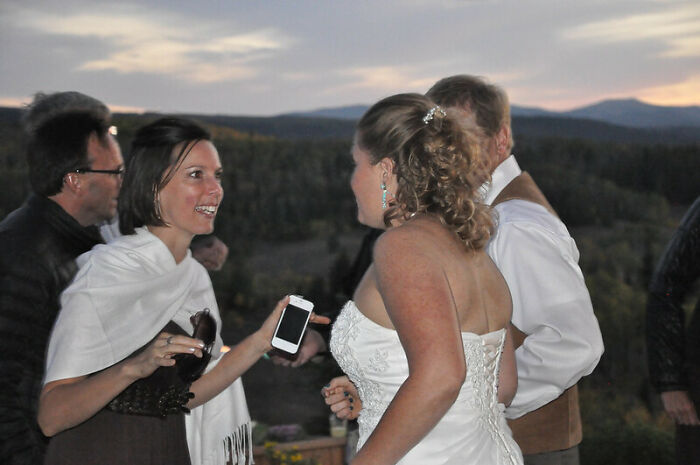 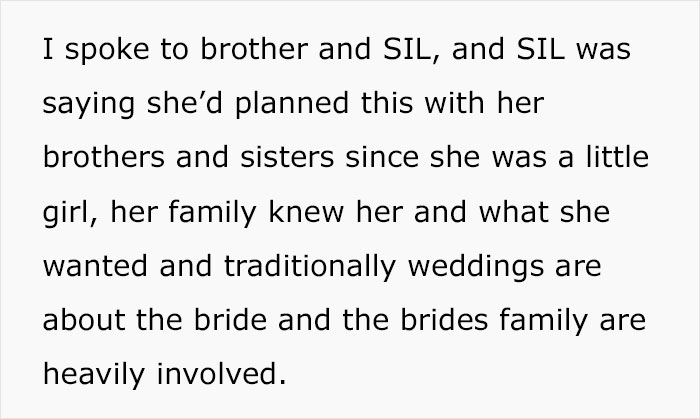 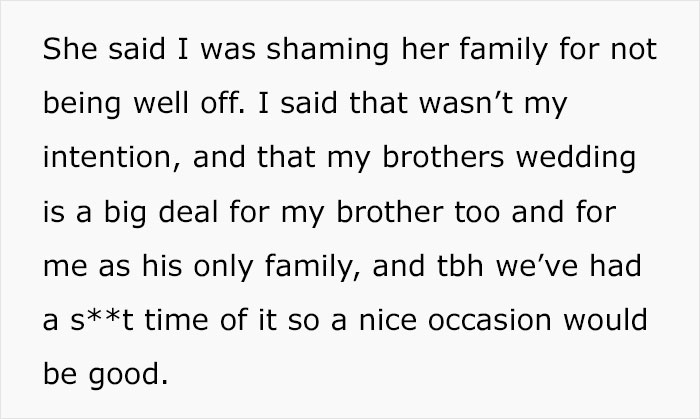 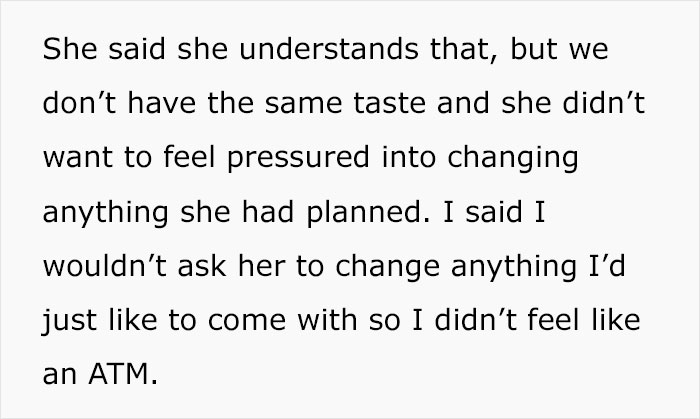 In the second update, she explained how she spoke to her brother and sister-in-law. Long story short, the conversation with the SIL went nowhere as whatever OP said, the SIL had something to say back, making her feel not needed in the planning.

It all escalated when OP got a call from the SIL’s mother, asking her to chip in on the honeymoon. She lost it, said she’s paying for the entire wedding as it is despite not being involved in any of it, which, turns out, the mother had no idea about. And after a phone call with the brother, she was reassured that her efforts are appreciated, but neither SIL nor her family really gets just how much OP was helping.

And, needless to say, it’s been quite challenging for her, as explained Downtown: “It’s challenging even when I’m not the a-hole, because it’s like a blind spot has been revealed, it also spilled into real life (I wanted to be specific, so the more details there were, the more questions I answered, the more it was obvious). It’s been a positive experience in the whole though.” 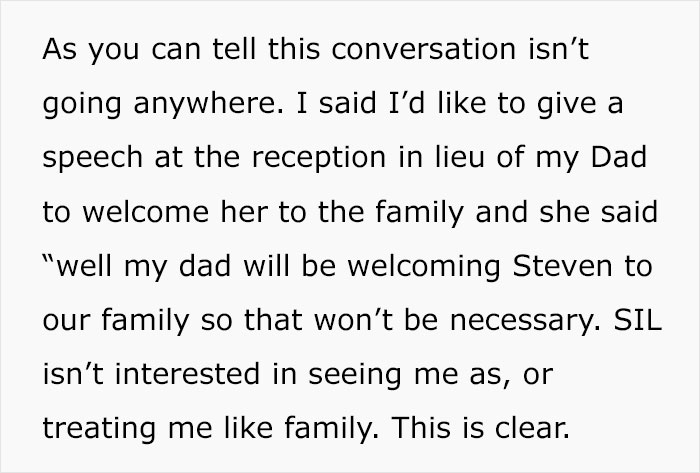 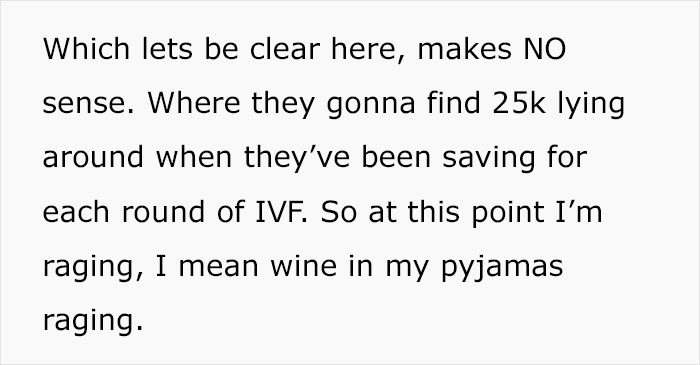 In the end, the two decided that OP would just attend as a guest, but she’ll be taking a step back with all of the financial things. She’ll still do some things, like supporting the brother’s IVF, but not more. This doesn’t mean they’ll stop seeing each other as much, they’re still siblings that love each other, but this move should be for the best for everyone.

People online unanimously determined that OP is in no way the bad guy here. OP was supportive all the way, no doubt about it, with many suggesting that she ought to step back, as it’s a “gravy train” that ought to end sometime as her brother is now an adult on multiple levels.

Some also pointed out that this can very easily escalate, like when the brother and SIL have kids, will OP be expected to fund the nursery, yet not be able to see the kid while everyone else does, and the like? 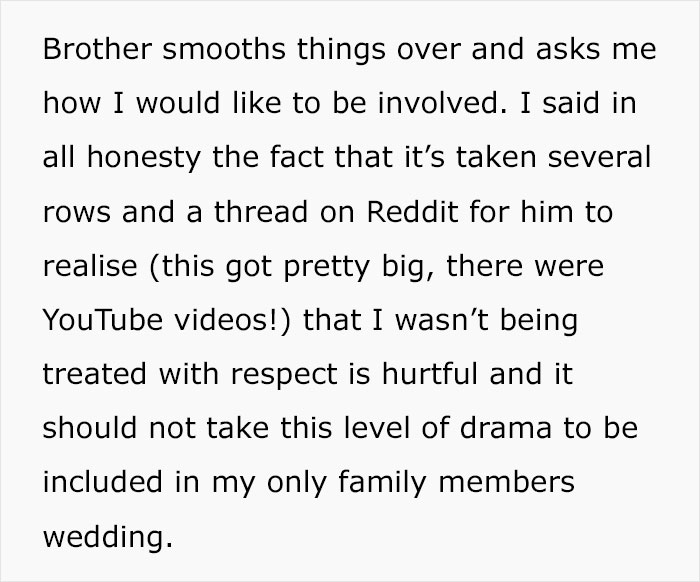 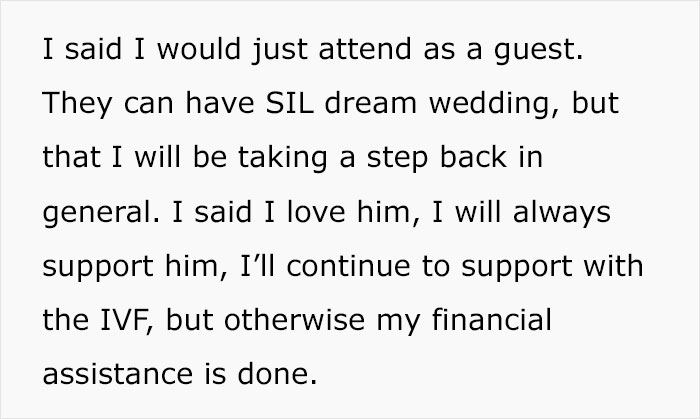 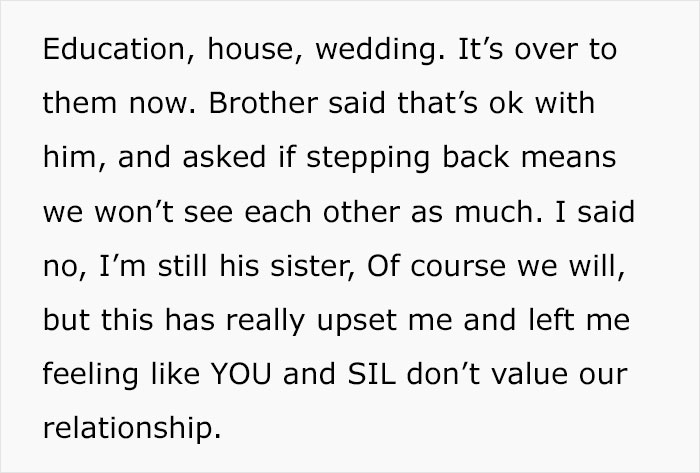 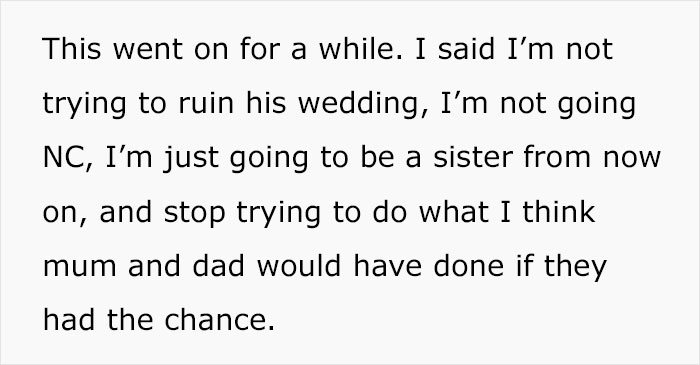 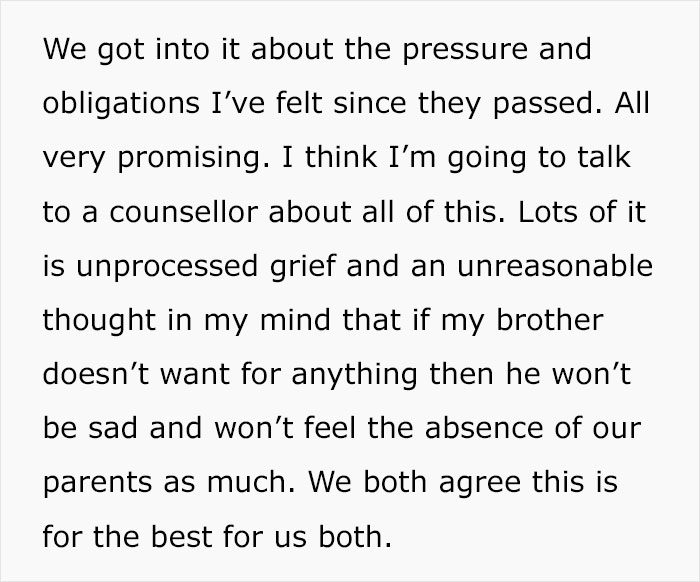 “It has been helpful in getting some perspective, but I am a little sad because I think people are very harsh on my brother, SIL and her family,” elaborated Downtown. “I don’t like to ruffle feathers and as this got quite big, my brother found out and it’s not very nice to read 1,000 people saying you are an a-hole.”

Oh, and there was a tiny development since the post went online, and that is that SIL’s mother sent OP a huge bouquet of flowers and a box of macaroons (which are incidentally her favorite) as she is now aware that they are paying and wanted to thank them in a small way.

Lastly, we’ve asked OP to reflect upon this experience and to give some advice to those who might also be in a similar situation:

“Take people’s comments on board, but also with a grain of salt. The sub is about a-holes, so people call what they see, but I also think like with advice giving in general and our own relationships, it’s always much harder to read unpleasant things about people you care about.”

She continued: “How many people who say ‘go NC’ would ever really go NC on their only living relative? Always much easier said than done. It’s been a positive experience, I’ve had a lot to think about, and however imperfectly things have been mostly resolved.”

The post “Didn’t Invite Me Because My Husband And I ‘Are Never Available'”: Brother Doesn’t Involve Sis In Wedding Plans Even Though She’s Paying For It first appeared on Bored Panda.