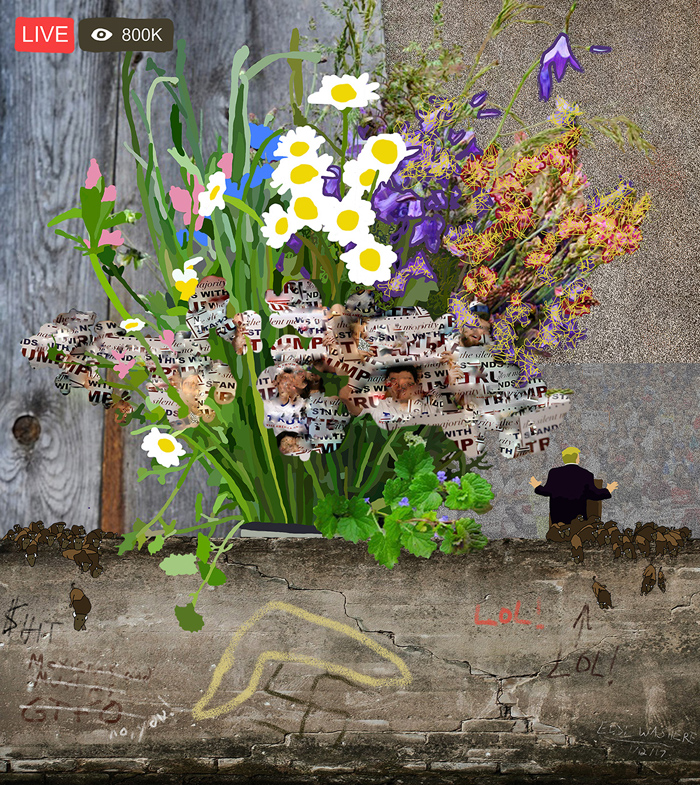 After Flowers for Algernon 13 (wall [with buffalo jump] ), 2017, Courtesy of Gregory Eddi Jones

Few things inspire great art quite like political turmoil. Many disaffected voters have sought post-election consolation in the idea that Donald Trump’s presidency might create a surge of reactionary work. One such example is the mixed-media art of Gregory Eddi Jones.

The most recent project from the Philadelphia-based artist behind Another Twenty-Six Gas Stations (2014), Flowers for Donald takes inspiration from the classic Daniel Keyes short story, Flowers for Algernon (1959). The story chronicles an experimental surgery that triples the IQ of the story’s mentally handicapped protagonist Charlie Gordon. At first the surgery is a success, but over time the effects fade and Gordon returns to his original state, damaged by what he has learned in the process. 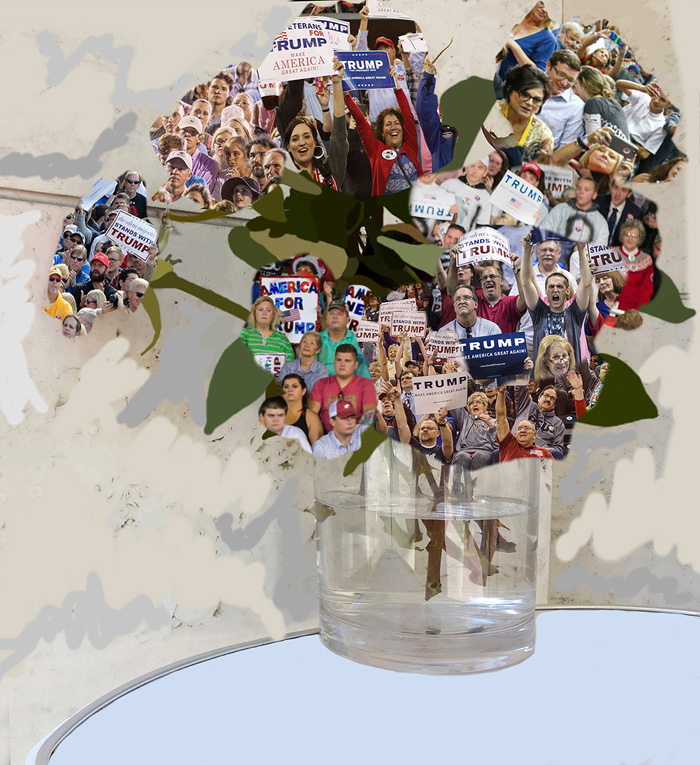 Conceptually, the artist’s collages of election images and flower still lifes intend to draw parallels between Gordon and marginalized Trump supporters, who Jones anticipates might not be satisfied by the consequences of their votes. 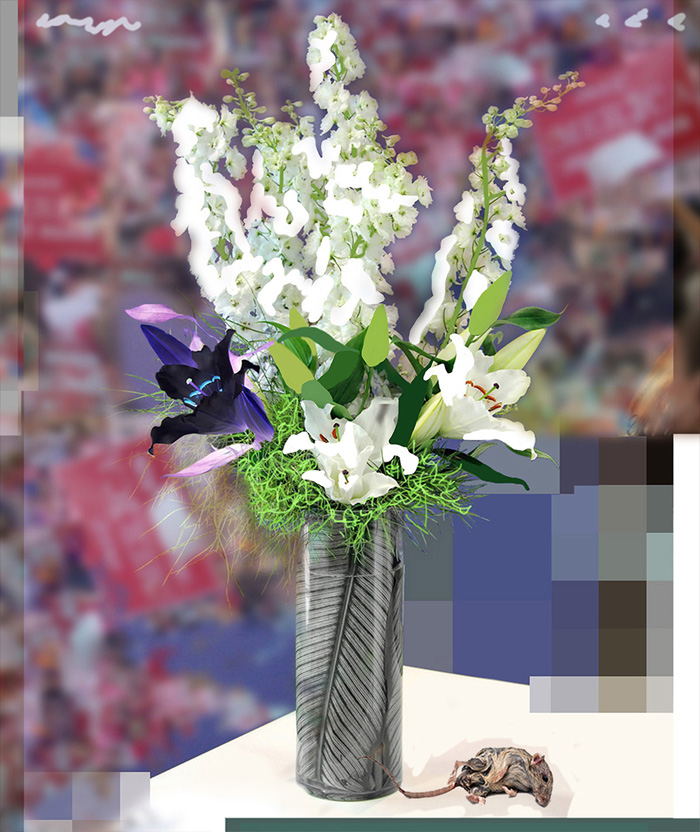 After Flowers for  Algernon 5 (with dead mouse), 2017, Courtesy of Gregory Eddi Jones

“I’m speaking about the sentiments of many Donald Trump voters who feel that politically correct dialogue and economic issues have left them with little social influence, and it takes into account my own prediction that this sense of marginalization felt by a large part of demographic that voted for Trump will ultimately return when he fails to implement meaningful policies that improve their lives,” says Jones in an interview with Humble Arts Foundation. 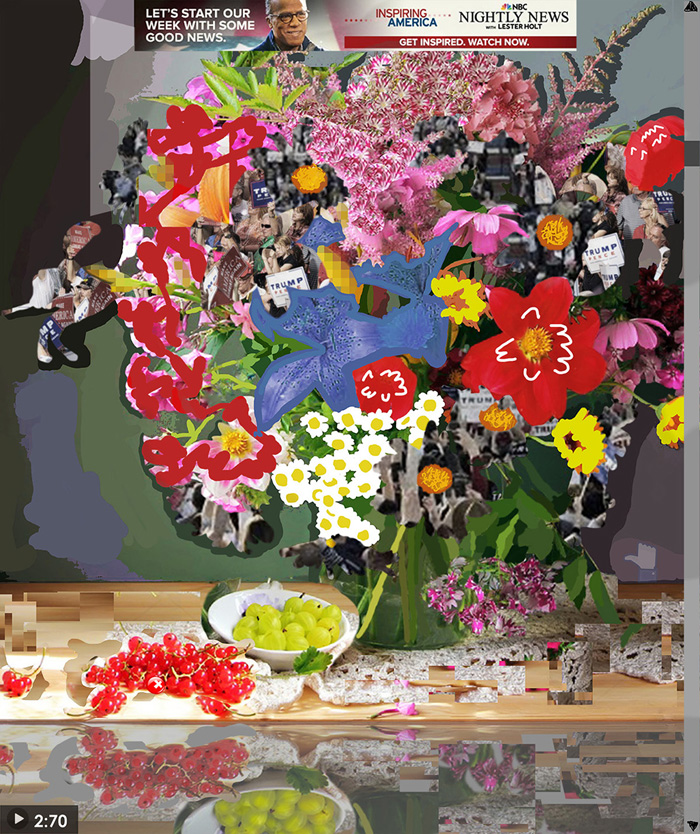 After Flowers for Algernon 10 (270 [Lets Start Our Week With Some Good News]), 2017, Courtesy of Gregory Eddi Jones

The internet-sourced collage materials range from NBC banner ads featuring debate moderator Lester Holt to pixelated photos of crowds. The election materials are roughly spliced into flower scenes in a combative contrast of pop culture and artistic tropes. The underlying influence of social media appears in the form of Facebook emojis and screen captures of Snapchat, further emphasizing the populist elements of the Trump movement. 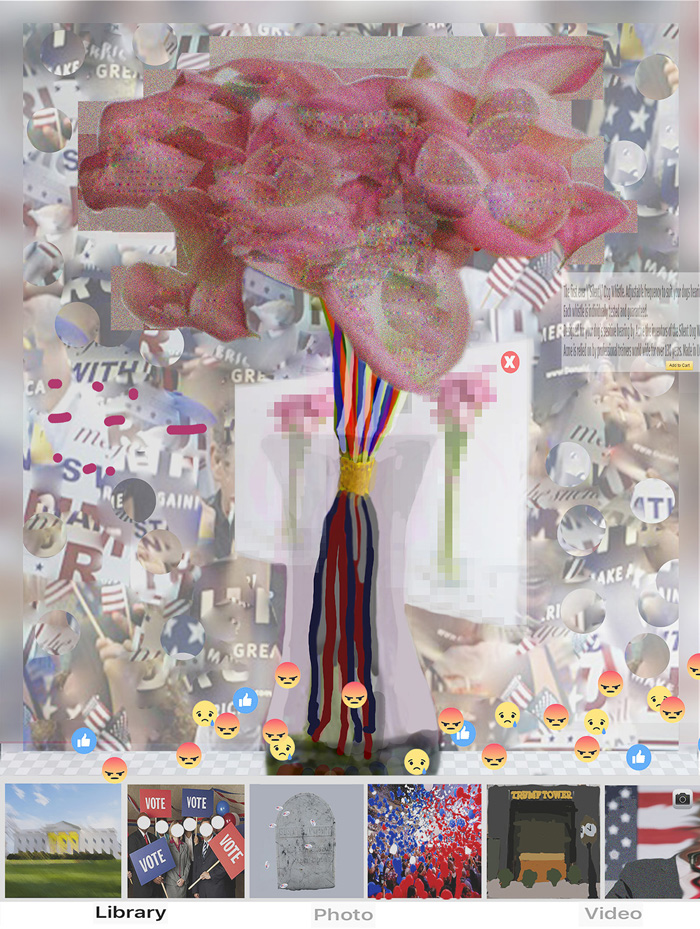 After Flowers for Algernon 11 (library [with reactions] ), 2017, Courtesy of Gregory Eddi Jones

“I’m working on fabricating images to act like the interfaces we experienced the election through, and want them to mirror the chaos, complexity, and overwhelming saturation of information that defines our virtual experience,” Jones says. The flowers themselves represent a host of different ideas, drawing not only from the short story, but from traditional artistic significations like beauty, temporality, protest, and memorialization. It’s a lot of themes to unpack, adding to the chaotic energy of each piece, but despite the underlying sense of discontent, Jones remains somewhat optimistic.

“This election was not fate and democracy isn’t dead. It just got caught napping.” 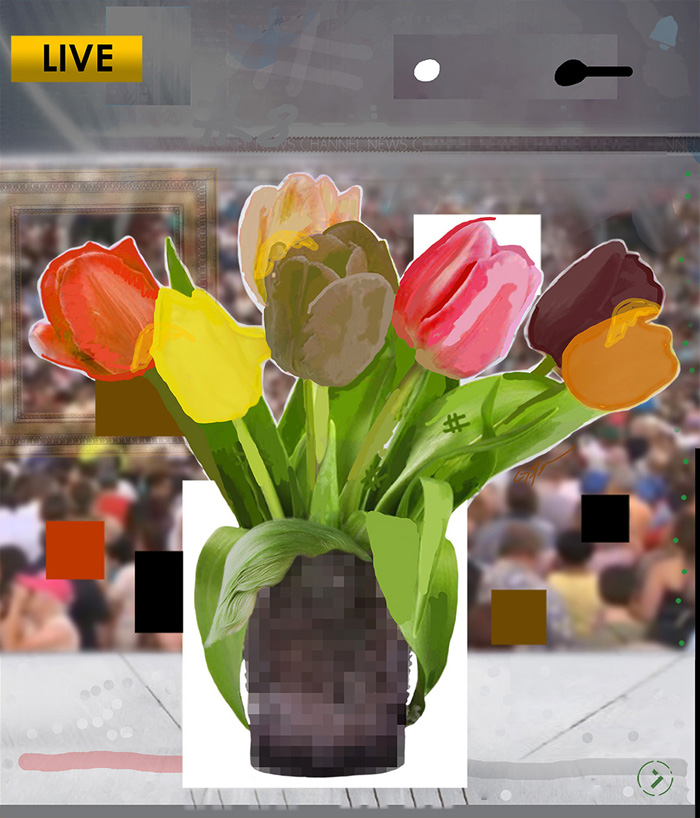 See more of the Flowers for Donald series at GreogryEddiJones.com.