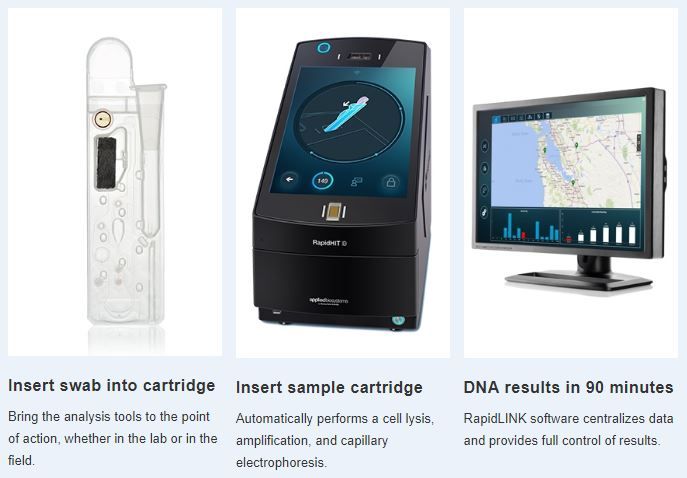 In the world of prime time TV, where a complex whodunit is solved in an hour (less commercial time), DNA evidence is analyzed in just a few seconds – usually with the haggard detective hovering right outside the state-of-the-art police lab.

In real life, on the other hand, where crime labs are often understaffed and perpetually backlogged, analyzing DNA samples can take weeks if not months.

But now, in a twist where real life mimics police tv shows, there’s a new machine that can analyze DNA samples very quickly.

From The New York Times:

They call it the “magic box.” Its trick is speedy, nearly automated processing of DNA.

… in early 2017, the police booking station in Bensalem became the first in the country to install a Rapid DNA machine, which provides results in 90 minutes, and which police can operate themselves. […]

The science-fiction future, in which police can swiftly identify robbers and murderers from discarded soda cans and cigarette butts, has arrived.

But not everyone’s excited. Critics, including legal experts and scientists, pointed out that the system can lead to trouble:

As police agencies build out their local DNA databases, they are collecting DNA not only from people who have been charged with major crimes but also, increasingly, from people who are merely deemed suspicious, permanently linking their genetic identities to criminal databases. …

“It’s a lot harder to resist the temptation just to run some people’s DNA, just to see if there’s anything useful that you get out of it,” said Erin Murphy, a law professor at New York University and author of “Inside the Cell: The Dark Side of Forensic DNA.” That approach challenges the “fundamental way we’ve structured liberty in our constitutional order.”

What do you think? Is the DNA "Magic Box" a boon or a ultimately pitfall to society?