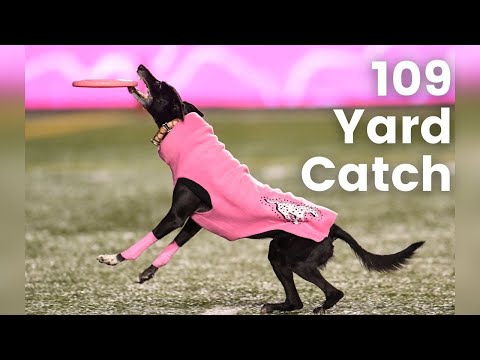 Go, dog, go! On October 23, Frisbee Rob McLeod and a very talented dog named Sailor performed during halftime at the Calgary Stampeders and Saskatchewan Roughriders game in Calgary. Ron threw a Frisbee from one end zone to the other- and sailor not only caught up with it, he caught it!

This sets a new world record for the longest catch at a live sporting event. Earlier this year, Rob Gronkowski caught a ball from 200 yards, albeit that was a ball dropped from a helicopter into an empty stadium. The longest catch possible in an official football game is the 99-yard pass, which has been done quite few times. But Sailor did it the hard way, by starting in the same spot as the thrower. If you want to see more of Sailor, a longer (five minute) video shows us the entire sequence.