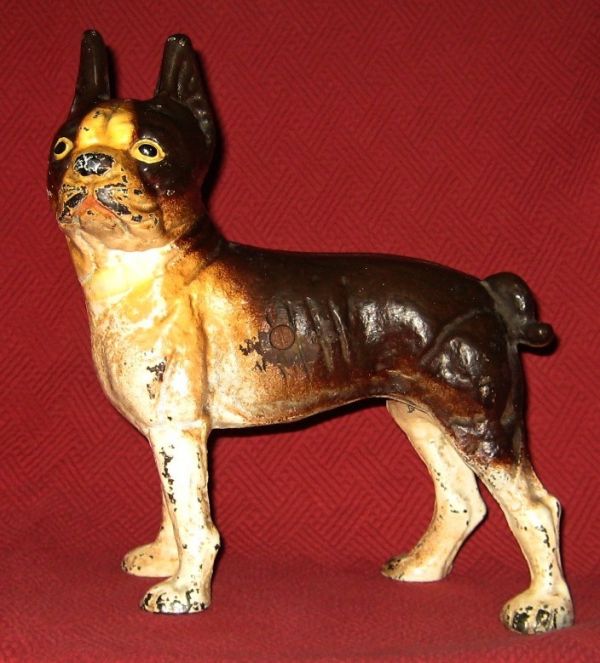 Have you ever seen a cast-iron dog? They were once quite popular, used to prop open doors or to keep doorknobs from damaging the wall behind them. Scott Thompson knows all about doggie doorstops, rabbit and fox doorstops, too, as he has collected hundreds of the antiques. Their value depends on age (which can sometimes be hard to determine), condition, and rarity.

Collectors also pay a premium for animals that face one way or another. “Boston terrier doorstops came in left-facing and right-facing models,” Thompson says. “Believe it or not, only 10 percent were made with their heads turned to the left, so the value of left-facing Boston terriers is like four times that of right-facing ones.” Thompson also has a couple of Boston terrier doorstops that are looking straight ahead. “You don’t see many of those,” he says. “As a collector, it’s rare to even come by one, but I’m fortunate enough to have two in my collection.”

As he learned more and more about antique and vintage cast-iron doorstops, Thompson’s collection multiplied, like Leporidae, you might say. “After I bought that Albany doorstop, that spurred me to buy another, and another, and another. At this point, I probably have 100 or so rabbits and hares.” For the record, there’s a difference.

For their part, the rabbits and hares got Thompson interested in dogs. The dogs, in turn, sent him down a rabbit hole filled with foxes, probably because Thompson has also always been intrigued by English fox hunting, a social ritual that happens to involve a lot of dogs. “Those are my favorites,” Thompson concludes, “rabbits, foxes, and dogs.” Foxes, it should be noted, are the rarest of these three animals, at least in doorstop form, which is why Thompson only has a dozen or more, including a boot scraper, another type of heavy object found near doors that Thompson collects.