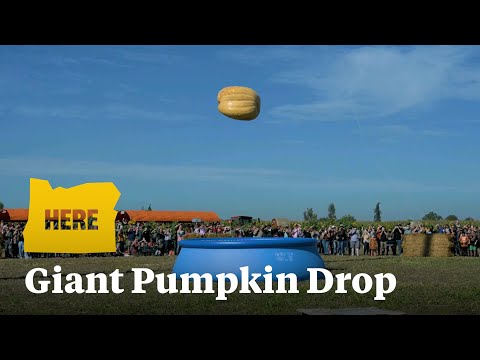 Growing giant pumpkins for competition can be a satisfying hobby, but there’s always the question of what to do with the pumpkin afterward. In Portland, a bunch of them were donated to the elephants of the Oregon Zoo. Another pumpkin found a different kind of glory. It grew to 1200 pounds, but then developed a hole that disqualified it for competition.

The organizers of Bauman’s Harvest Festival, held by Bauman’s Farm and Garden in Gervais, Oregon, came up with an idea. To entertain the crowd, they brought in a crane and a pool and dropped the pumpkin from a height of 100 feet! While waiting for the splash, you kind of wish that they’d dropped this gourd without a pool underneath. But when you see the aftermath, you realize that even small chucks of a 1200-pound pumpkin could have caused some real misery if it had bounced into the crowd. A good time was had by all. -via Digg