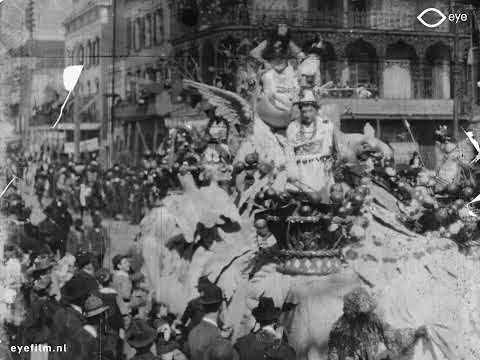 Arthur Hardy publishes a New Orleans Mardi Gras guide. He had been searching for decades for a rumored film clip of the city’s 1898 Mardi Gras parade, the first one ever filmed. The rumors were true, and he finally found it this past March in, of all places, Netherlands. The Eye Filmmuseum in Amsterdam had a clip, less than two minutes long, the Holy Grail of New Orleans history documentation.

Taken on February 22, 1898, the film depicts six floats from the parade. The theme that year was “Harvest Queens,” per the Times-Picayune/New Orleans Advocate. People carried silver bell-shaped placards before each float to commemorate the Rex Organization’s 25th anniversary.

People sure did dress up to watch a parade back then! The found footage was debuted to the public last month, and will be a part of an exhibit on the Rex Organization’s 150th anniversary. I read that and thought, “I bet that’s on YouTube already.” You can read the story behind the film and the search for it at Smithsonian.