Above a courtyard in North Miami, balanced along clotheslines like small birds, a set of delicately-folded origami boats glistens inexplicably. They’re made with paper, but when the sun hits them, they glow: a bunch of incomprehensibly shiny vessels.

Norse burial ships; the Japanese tradition of the Sharabune Okuri; the Khufu ship of Egypt: the boat is a symbol of transition between worlds. The boat has come to signify the plight of refugees, too, who often endure perilous conditions and face death to evade peril and death at home (except, of course, in the instance of forced immigration). These immigrants are revered at For all boat people, Gina Cunningham’s exhibition at North Miami space Under The Bridge, curated by Jane Hart. Part emergency-protest, part homage to the displaced, the show also questions the idea of ownership: to whom, exactly, does land belong? 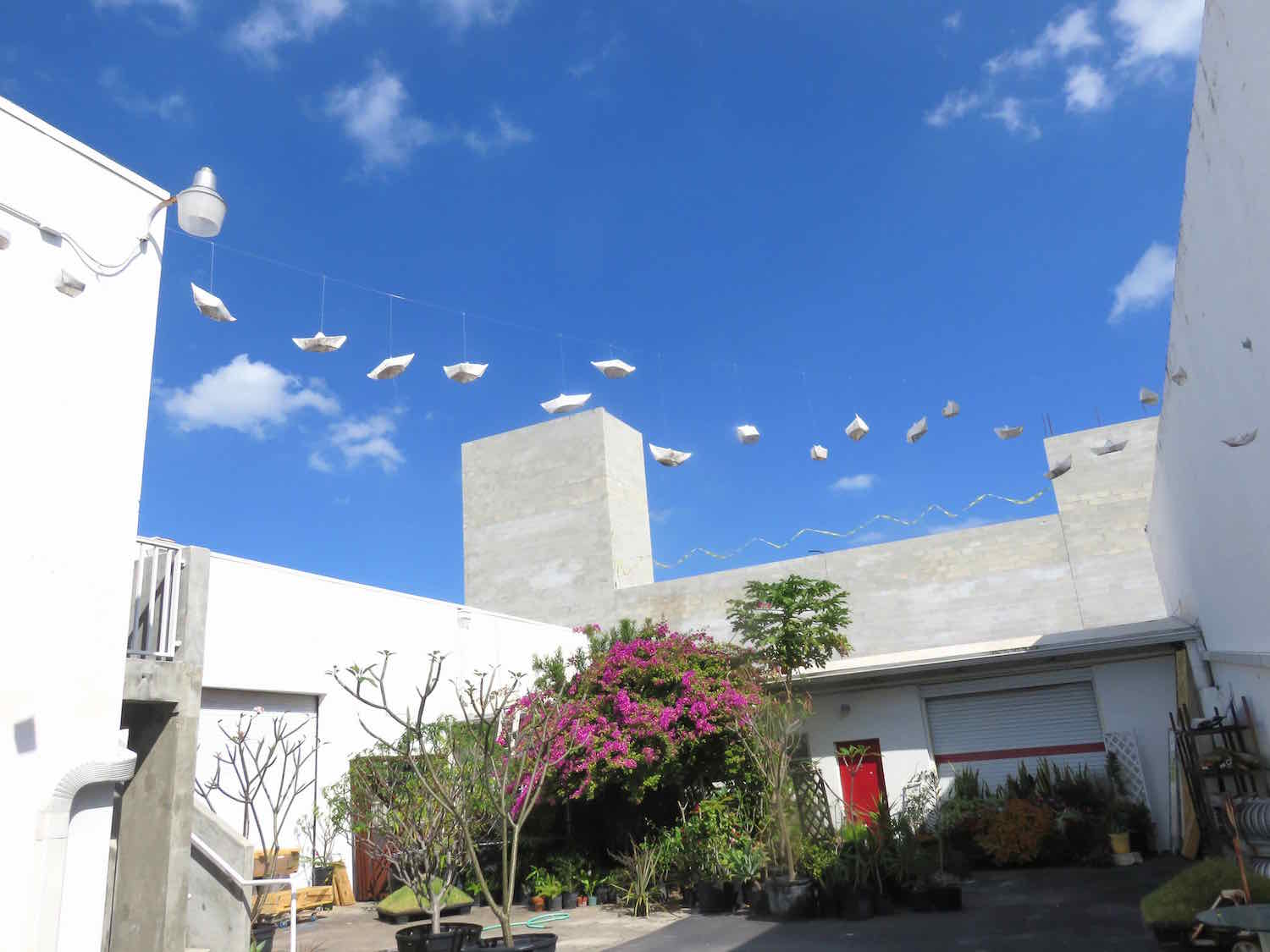 Installation view of For all boat people, exterior. Image by the author 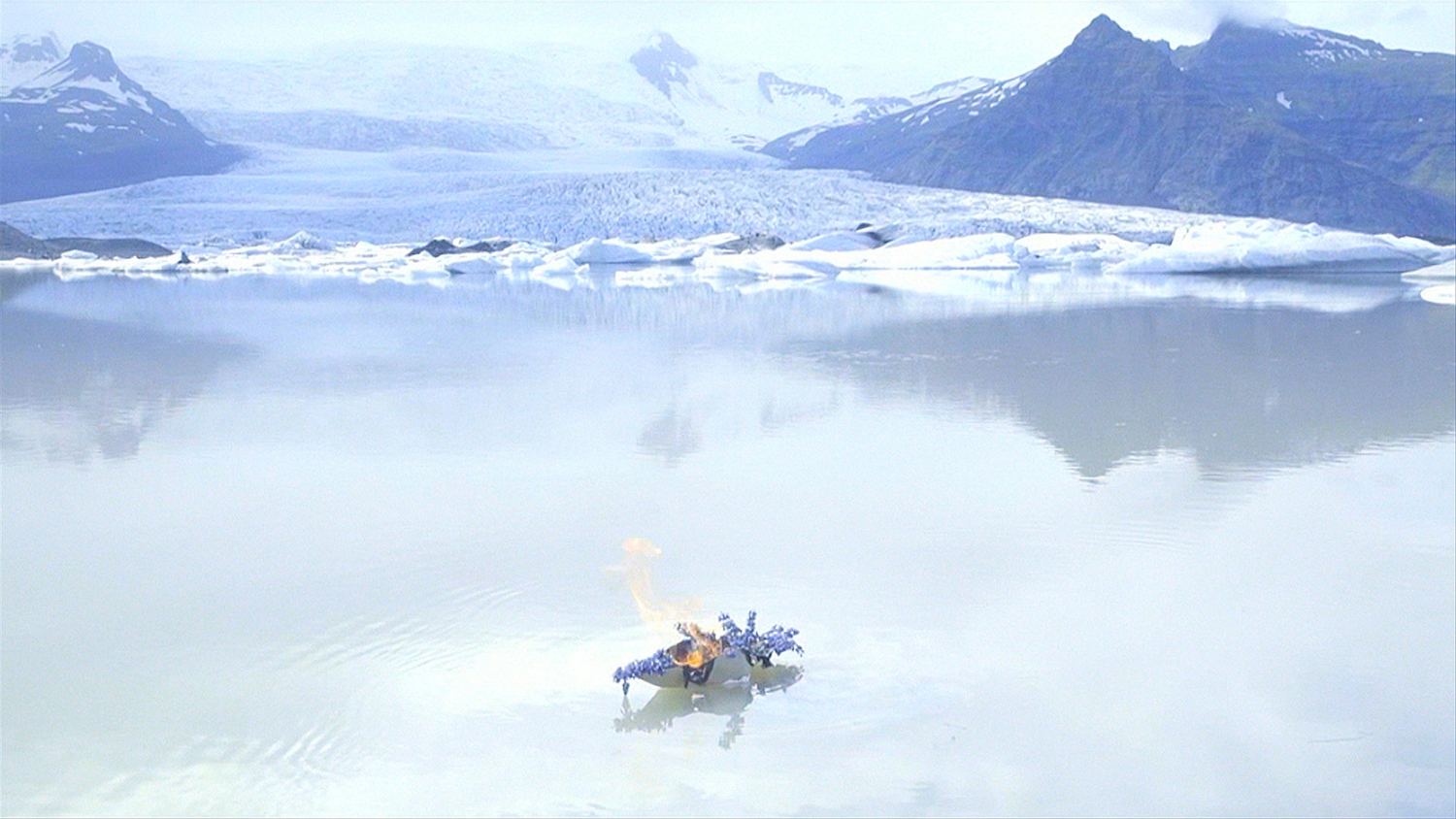 The plight of immigrants has always been a deep concern of Cunningham’s. When gallery director Lou Anne Colodny was the director of the Center for Contemporary Art (now the Museum of Contemporary Art, North Miami), the two collaborated to showcase Haitian artists at a comprehensive exhibition shortly following an influx of immigrants from Haiti in 1994. “There was a tremendous amount of fear in the community,” says Colodny, explaining that the local rhetoric was then alarmingly similar to the Trump administration’s regarding immigrants.

Cunningham later became fascinated with boats and water during a residency in Varanasi, a Holy City in India, where she watched residents and tourists bathe and pour the ashes of cremated bodies into the sacred Ganges River. Since then, she’s floated paper boats in Russia, Haiti, Mexico, and Iceland, all of which can be seen in videos on view. 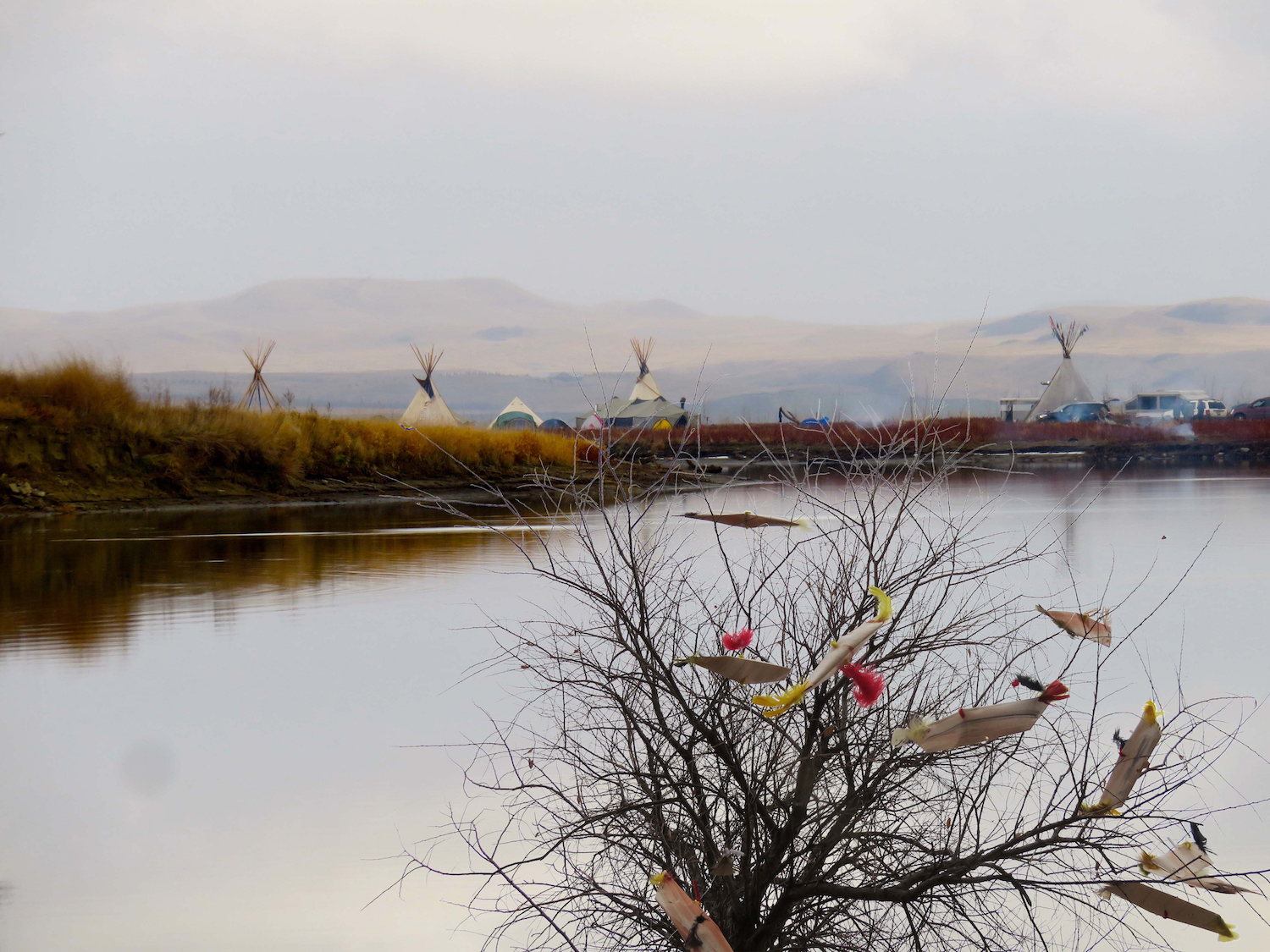 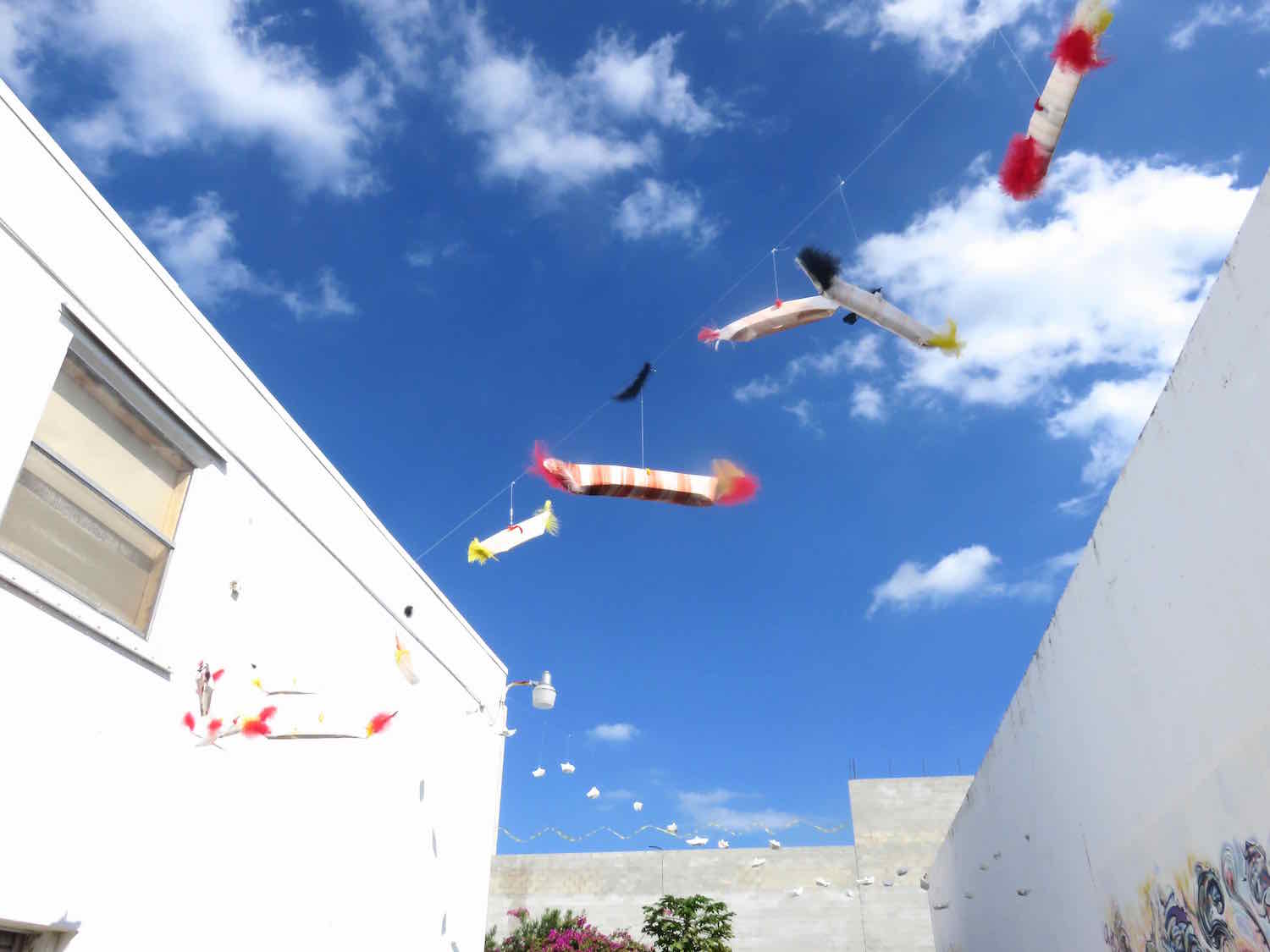 Installation view of For all boat people, exterior. Image by the author

There’s also a short film documenting the Water Protectors at Standing Rock, where Cunningham’s boats hung from barren trees as she held space with her family and their doctor, who provided medical care for the community. Her experience there speaks to the strange nature of displacement: an immigration ban is painfully ironic in light of the country’s indigenous populations being rendered invisible by the people in power (once immigrants themselves).

Above another video—Cunningham’s footage of the Desfile de los Locos parade in San Miguel de Allende, Mexico—hangs a letter she wrote to Trump: “Do you think you and Melania are different because you are white? I cannot think of any other reason for your blatant insult and denigration of immigrants—especially Mexicans.” The video was made last summer; in light of Trump’s string of frenzied and imprudent executive orders, it’s far more unsettling. 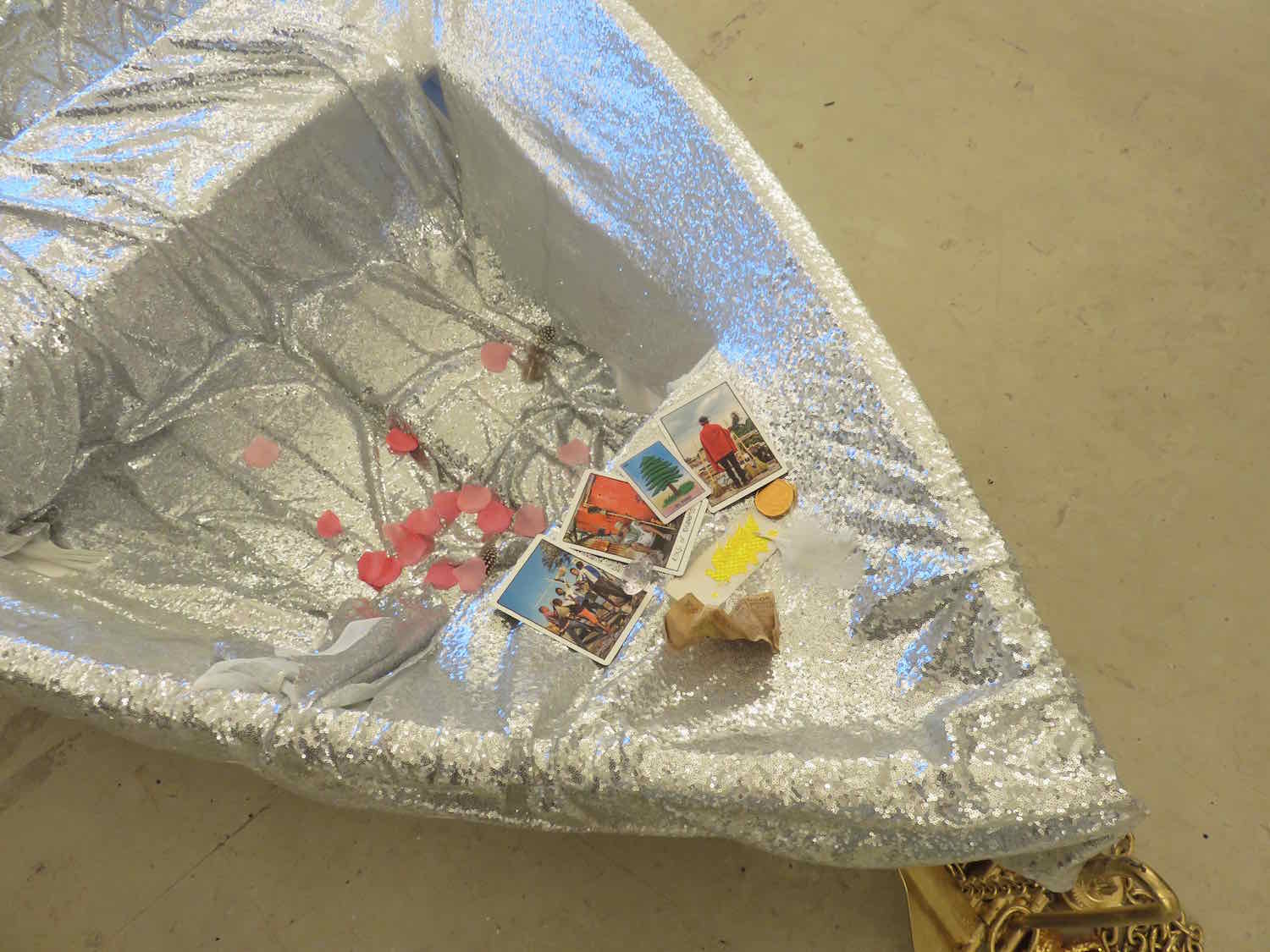 Boat altar at For all boat people. Image by the author

On Sunday, February 12th, a procession of dancers choreographed by Colleen Farnum—all of whom represent immigrant populations from India, Haiti, Cuba, the U.K., Eastern Europe, and Peru—pulled a large boat through the courtyard, draped in silver, while candy money was set ablaze, filling the air with the strange, sweet scent of burnt sugar. The dance functioned as a kind of reverential protest, mimicking in its movements the journey all migrants must take across water and land. In its languid freneticism, and the repetition of drumbeats guiding it all, the performance resembled, in spirit, the Lakota Ghost Dance, a prayer to revive ancestors and cleanse the land of colonizers. Dancers sang haunting hymns and carried fire, that ultimate representation of consecration and light. 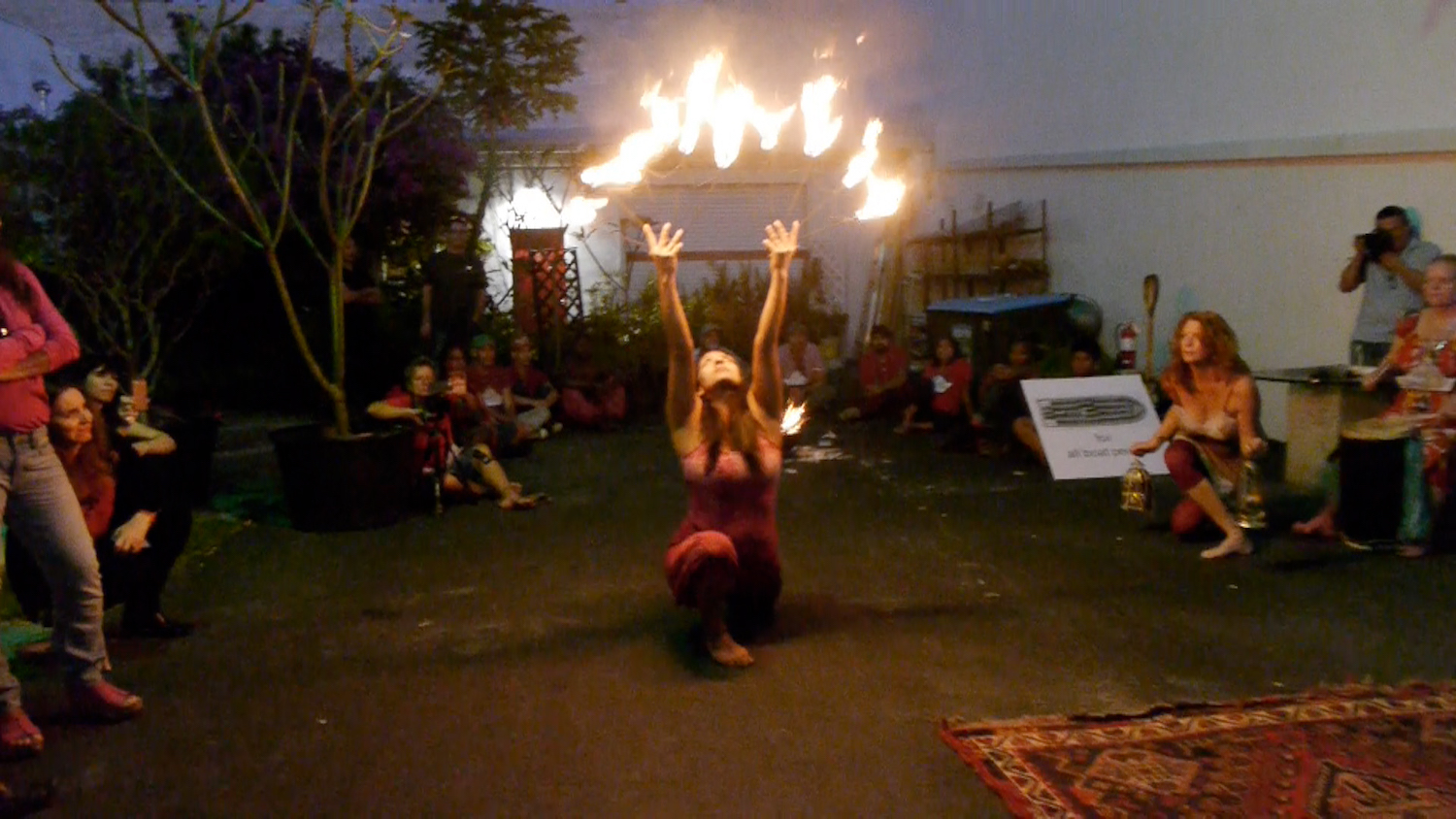 A second performance will take place next month, at the show’s closing, focusing this time on Iranian and Iraqi tribal music and again protesting the Muslim ban. For now, guests are invited to bring offerings and prayers to the gallery’s altar, located inside an eight-foot boat. The act recalls Haitian writer Félix Morisseau-Leroy’s poem, “Boat People,” which reads, “Miami heat eats away our hearts/Chicago cold explodes our stomachs/Except for the Indians/all Americans are immigrants/But it’s us they call boat people.”

For all boat people continues through March 19 at Under the Bridge with a closing performance that day. Outside of normal gallery hours, viewing is available by appointment: 305-401-5889.

How the Nation’s Artists Are Standing with Standing Rock

How Artists Are Addressing the Syrian Refugee Crisis