There’s an entire spectrum of bosses out there in the vast wilderness of the business world, you just need to take a closer look. You have average bosses and bad bosses. Bosses that are mean, bosses that try their best (but fail the test). You have bosses that are good, even great. Goofy, loveable, cold, and aloof. But the rarest of all are bosses that you can, frankly, call ‘epic’ without it sounding over the top. These are the people who fight for their employees and help improve their careers even without asking them to.

Redditor u/sc0ut3rofroy had an awesome story to share with us about a job way back in their high school and college days doing telemarketing. One day, they were late to work because their car broke down. Their boss used this as an excuse to fire them. BUT! Hang on there, don’t be quick to judge because the story has an incredibly wholesome ending. The boss actually rewarded the hard-working employee in a roundabout way to comply with corporate policy. The words, “Is it ok if I fire you” might make us sweat profusely, but they don’t always end badly.

Read on for the full story, Pandas. It’s a great one, definitely worth the read. There obviously need to be more bosses like this out in the world, that’s for sure.

There are good bosses and then there are absolutely fantastic bosses who always fight for their employees. They’re incredibly rare in this world 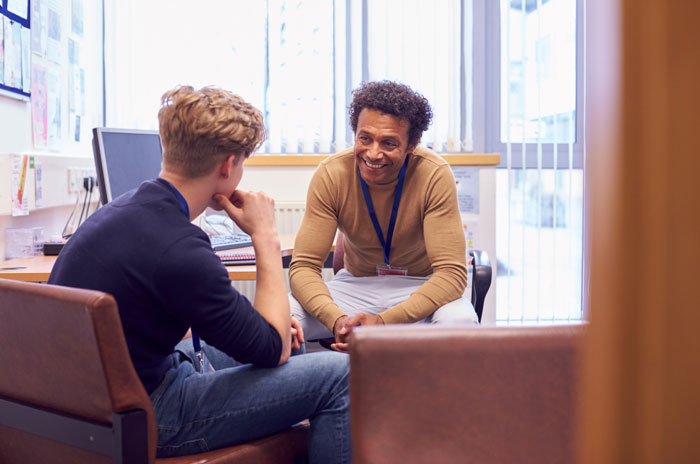 An internet user opened up about the best boss they’ve ever worked for. A boss who fired them when they were late, only to reward them 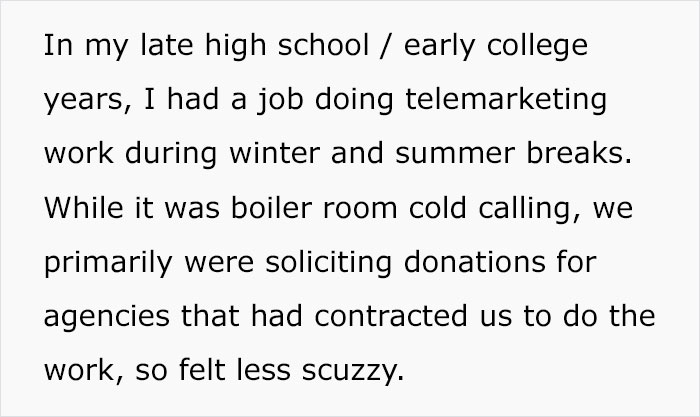 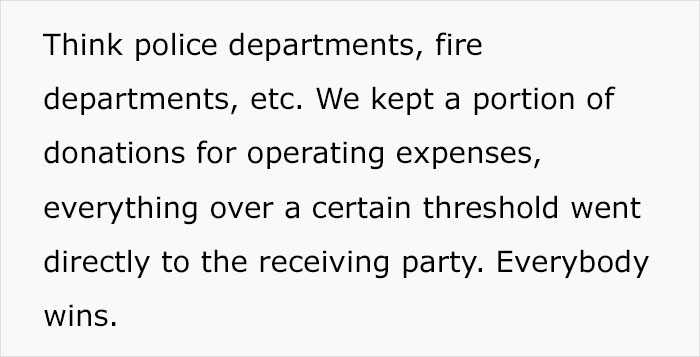 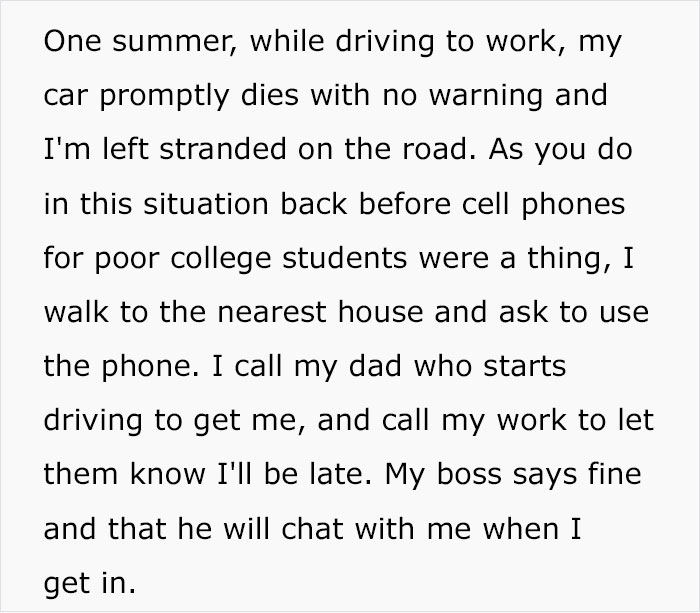 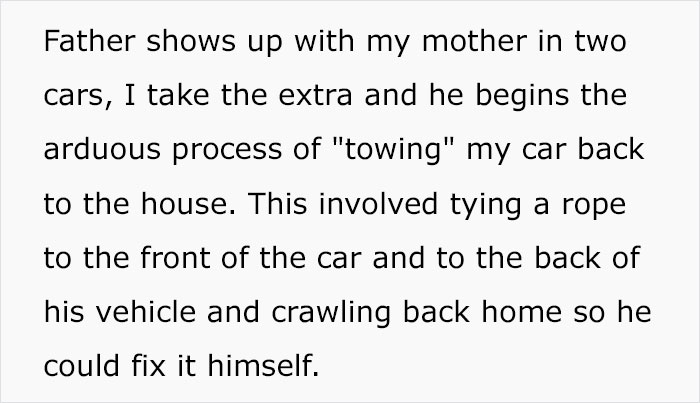 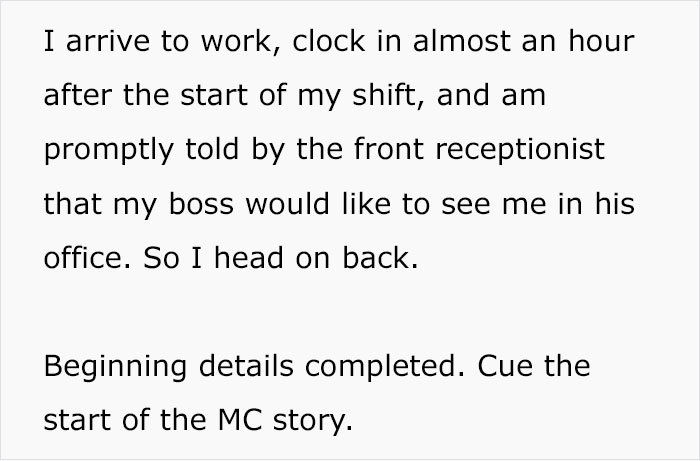 Now, let’s get into the meat and potatoes of the story. Here’s what happened when the employee went into their boss’ office 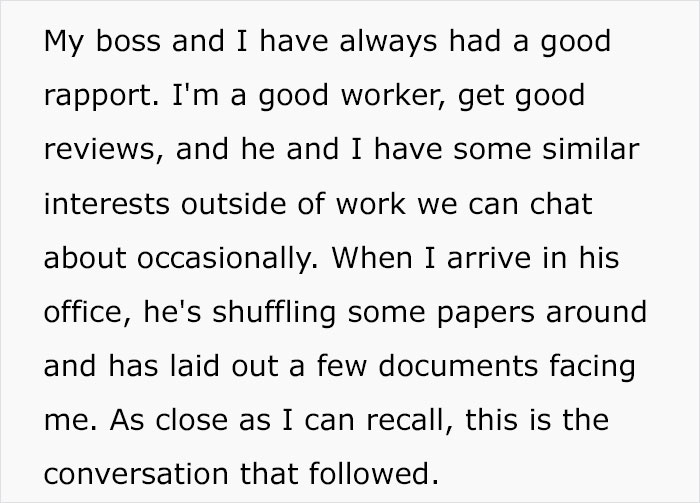 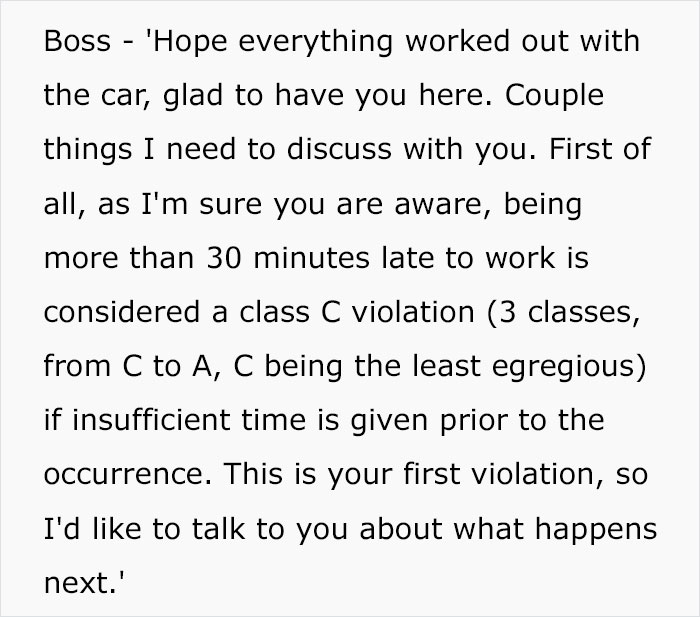 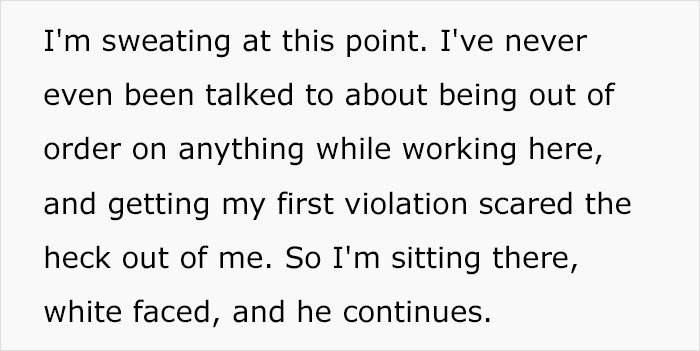 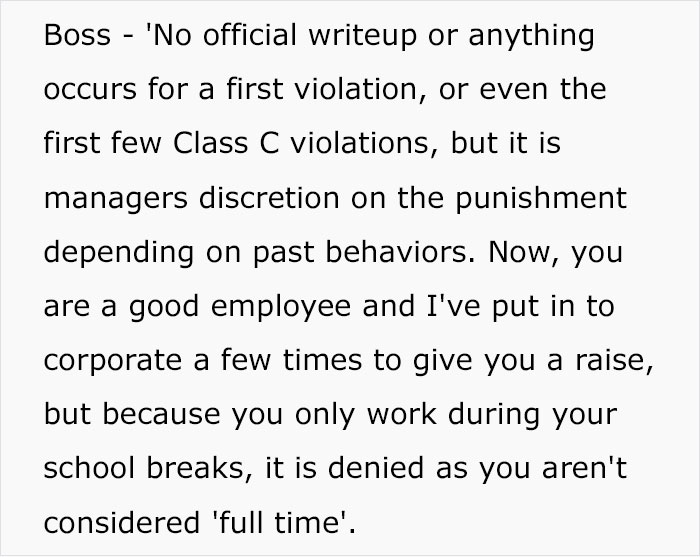 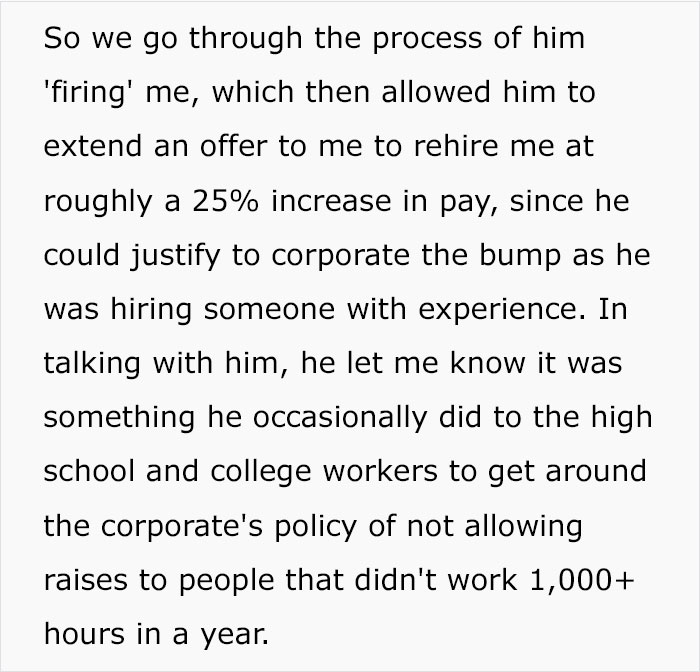 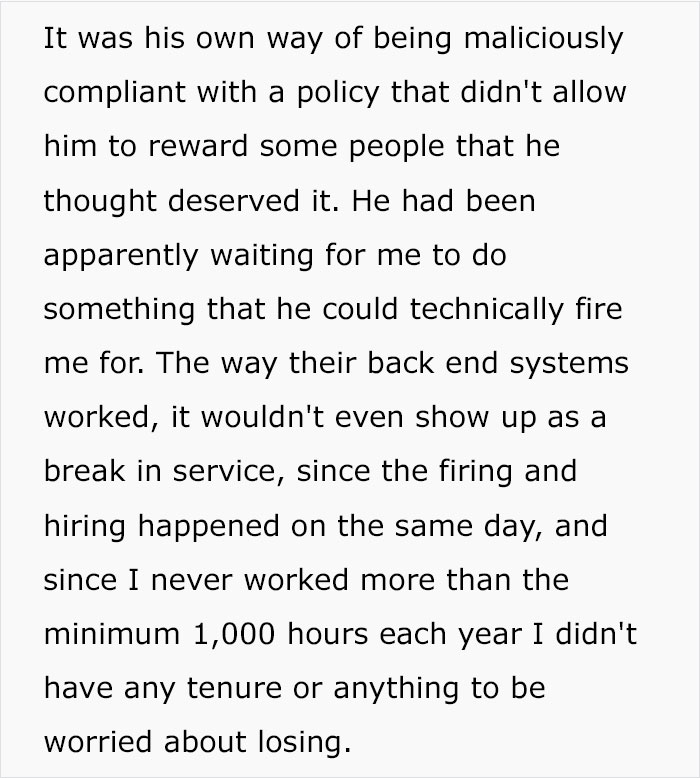 Later on, the redditor added some more context to the story 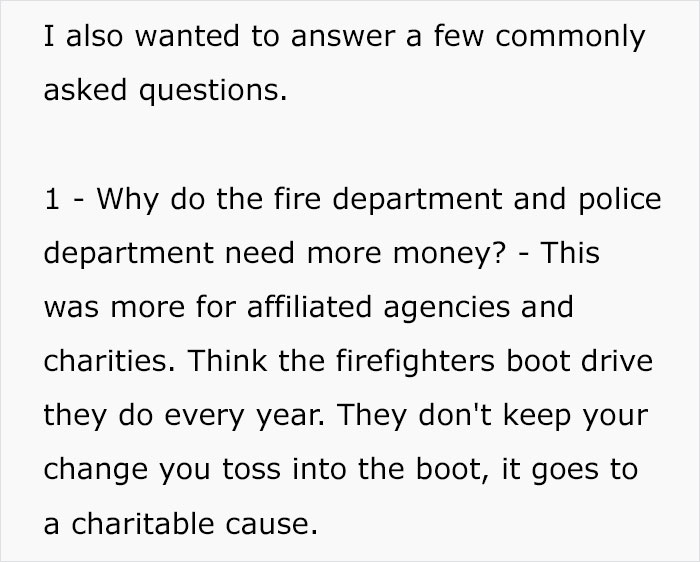 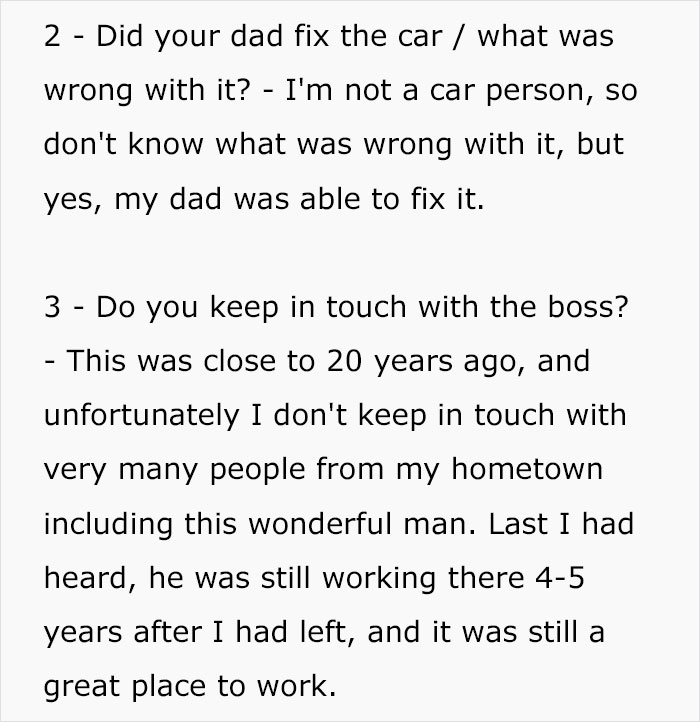 The redditor’s post was incredibly popular on the r/MaliciousCompliance subreddit, a massive online community where people share how they or someone they know conformed to rules and requests to the letter, rather than the spirit. Malicious compliance can be both a force for good and evil, so it would be wise to think about the potential consequences. It’s also a great way to dispense justice when needed.

The author’s story got 30.8k upvotes, as well as a ton of rewards. The redditor didn’t hide the fact that they were surprised by all of the attention. They also admitted that they had to Google what these awards meant.

In redditor u/sc0ut3rofroy’s story, their boss maliciously complied with corporate policy to fire and rehire the hard-working employee with a 25% raise! You see, the boss couldn’t give their employee a raise any other way, so they took the only route available to them. You could even say that they were looking for any excuse, any rule-breaking to put their plan into motion.

From the story, we also learned that the boss had been applying this specific business strategy with quite a few of his employees who he thought were worth supporting and rewarding.

There are two morals to this story, I think. First of all, we realize just how many peculiar rules companies might have, some of which actively impede employees in their attempts to build a proper career.

Second of all, your coworkers who want to help you grow and help you navigate the labyrinth of sometimes confusing corporate policy are worth more than their weight in gold. They’re precious, and they keep our hope alive that the corporate world can be more than a soulless, profit-oriented, dehumanizing place, bent on world domination at any cost. I’m kidding, of course (but I’m only saying that because I don’t want anyone to send corporate ninjas after me!).

However, we have to face facts that far from every boss or manager is going to be our ally. It’s not pessimistic, it’s realistic. And that’s why we need to know how to manage our managers and to constantly remind them of our achievements. That is if we plan to climb the corporate ladder and want raises, promotions, and perks.

Financial expert Sam Dogen told me earlier that managing our managers means constantly communicating with them, keeping them in the loop about what we’re doing.

“Managing your manager entails keeping him or her abreast of what you are up to,” Sam, the founder of the Financial Samurai project, told Bored Panda. “It means highlighting your key wins and reminding them at the end of the year about what you did in the first half of the year.”

The expert also suggested that we keep a paper trail and document important conversations, events, and promises.

“It is very important to keep everything in writing. Over time, we tend to forget our interactions,” he said. “By keeping things in writing, we can better remember situations and better argue for ourselves when it comes to asking for a raise and a promotion.”

A lot of internet users were very impressed by what the boss did. Here’s what they had to say about it all 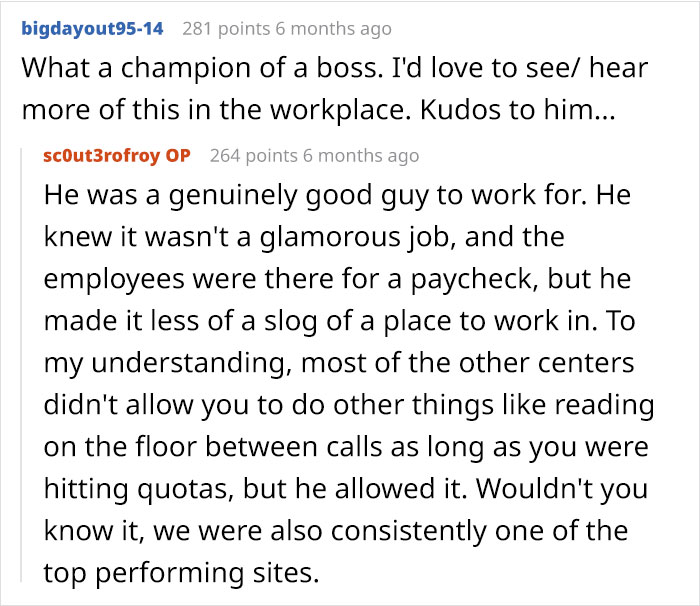 The post Employee Arrives Late, Boss Fires Him But Then Pulls A Switcheroo first appeared on Bored Panda.