No matter if you’re working your dream job or doing daily drudgery in a cubicle somewhere in a high-rise, there’s a part of your job that’s so boring you wish you could automate it. Well, modern problems require modern solutions. And some folks turn ideas into reality.

Redditor u/Cynicusme opened up to everyone on the r/antiwork subreddit about how he has been paid to ‘do nothing’ for the past 5 years. The genius internet user got a night-shift job doing data entry and then automated his own tasks. That meant that everything was done on time automatically. All he had to do was check to see if the code was working from time to time. Which left him earning a decent income while also having a bunch of free time. And, frankly, who doesn’t sometimes daydream they could have a situation like that going on.

I got in touch with the author of the post, u/Cynicusme, and he was kind enough to go into detail about their job and the entire idea to automate his daily (or rather nightly) tasks. “When I first got my job, it started to feel very repetitive, there was some decision-making, but it felt that there were only around 8 to 10 little decisions that had to be made. So, I started by automating copying and pasting that was the most tedious part of my job; then, there were some decisions based on pricing, order quantity, location, all well-documented on a spreadsheet,” he shared.

“Progressively, I hit the point where I knew more could be automated, but I didn’t possed the skill to do it at the time, so I contacted a developer, told him what I needed to have done. The whole process took us around 6 to 8 months to completely automate all of my tasks. Eventually, I named my script ‘Cody’ from code. I know. I’m a dad now. I can make those jokes,” the witty redditor said opened up to Bored Panda. ‘Cody’ became part of his life outside his job. The script became almost like a colleague.

“I would occasionally tell my friends or my then-girlfriend, now wife. that I need to go, Cody needs me. So I was secretive about this whole thing to the point that my girlfriend once asked me if I was going to invite ‘Cody’ to a Christmas party. I’m still chuckling as I’m writing this. I’m such an idiot,” the redditor said. Scroll down for Bored Panda’s full exclusive interview with u/Cynicusme, as well as their full story in his own words, dear Readers. When you’re done, be sure to share your thoughts in the comment section. 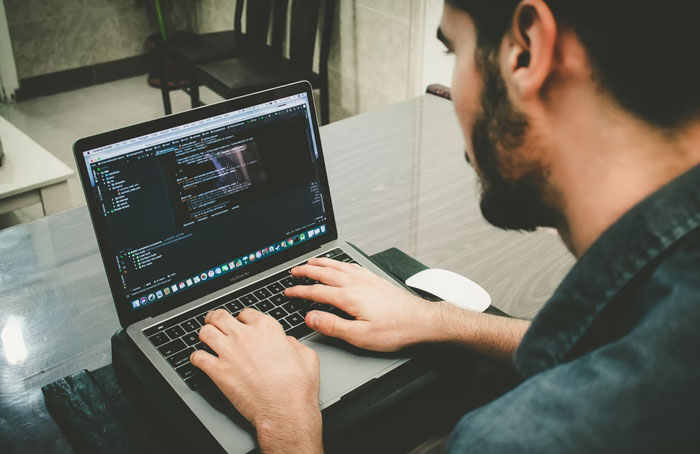 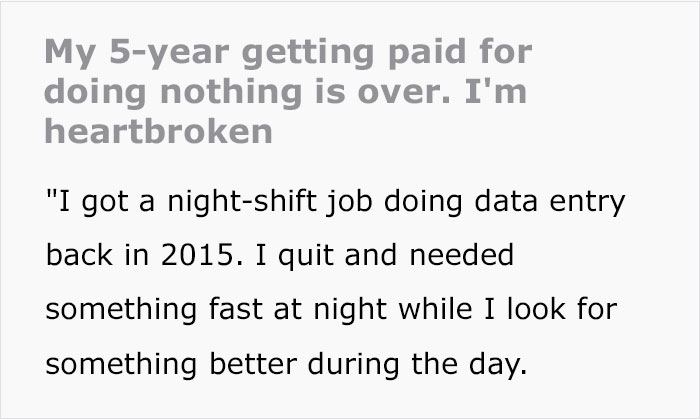 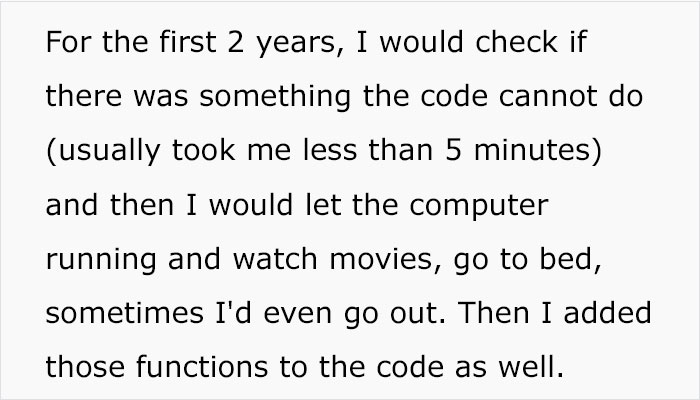 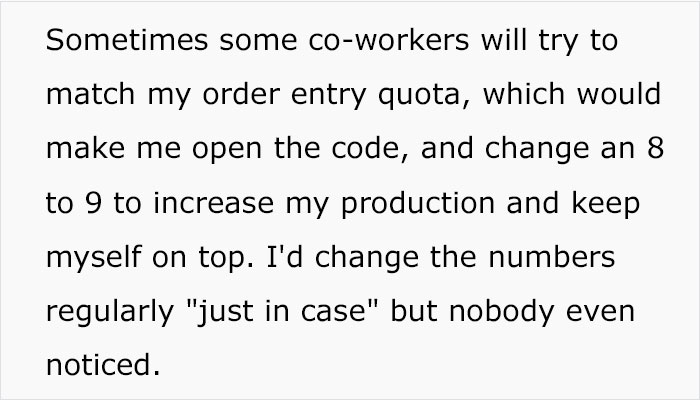 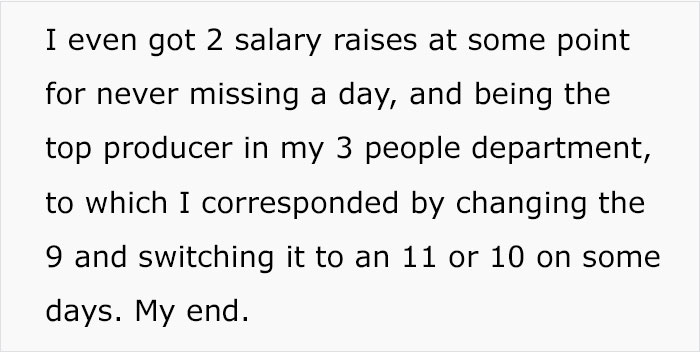 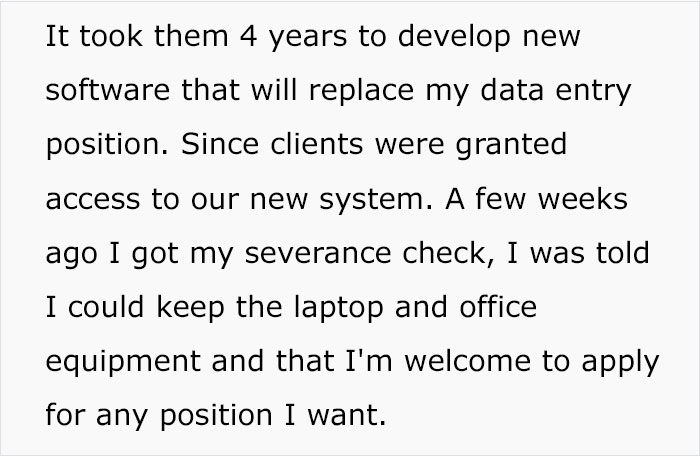 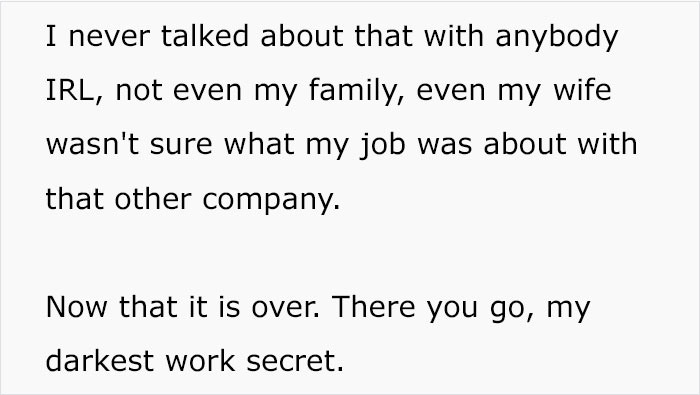 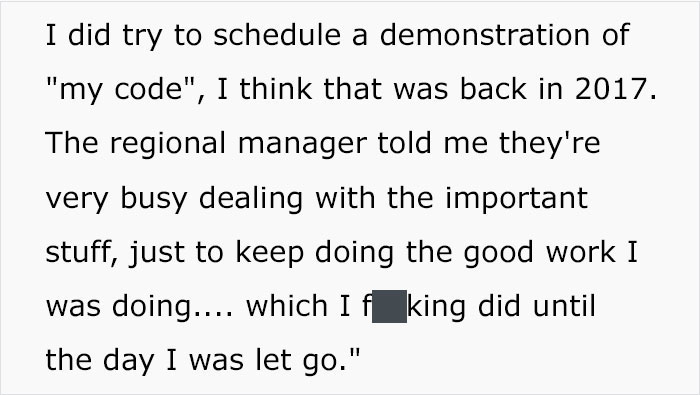 According to the author of the post, ‘Cody’s’ script would e-mail him “if a page was not loading, if the script could not complete a task, or if a ‘communicator’ received a message from a co-worker or boss.”

I was curious to find out how the redditor felt after they lost their job and had to retire ‘Cody.’ The redditor told me that he “felt heartbroken” for his finances. However, there was also a small sense of relief, too. “There was this thing in the back of my head at all times that someone will notice, what if they figure out and contact the company I’m working for right now, what would people think of me when this comes to light,” he told Bored Panda that there was some low-key anxiety there, even if things seemed quiet.

“The secret to pulling something like this for so long was keeping a low profile at all times. People would never see me talking about this with anyone,” he said. “The few times my manager would contact me, I was in total panic mode. It wasn’t easy to hide, and I felt my heart was going to explode.”

Around 4 to 6 months after automating his night-shift tasks, he then got a second job. “I would open my laptop and run it by my side during the last few hours of my ‘second job’ and the first hours when ‘Cody’s’ shift started.” Eventually, he considered dropping the night-shift job but never did. “It turns into ‘tomorrow I’ll quit,’ ‘I don’t need this anymore,’ ‘just this month I need to pay for ‘x,’ ‘I will quit as soon as I paid off my car,’ so on and so forth,” he explained why he never did quit. The extra income was very useful.

The redditor noted that they optimized a lot of unnecessary things at their current job, too. “I don’t mind working, but I’m not too fond of repetitive tasks. This time around, I spoke out, got a management position within my company,” he said.

“I received a lot of questions about how to ‘get’ a job like that,” u/Cynicusme told Bored Panda how others reacted to his story online, looking for some clues on how to follow in his footsteps. There was a lot of luck involved in his particular case. “First of all, it was the perfect storm, nobody had put together how repetitive and little thinking there was in the position, it was a priority for the company to get this done since this could be done by three people. It was just the perfect storm.”

According to the redditor, programmers are “coding themselves out of a job.” In his opinion, being secretive about some things leads to better job security. “Part of the reason I never insisted on introducing the regional manager to ‘Cody’ was that I knew it not only kills my job, it will leave three people out of a job as well,” he said that we have to look at the broader picture.

The author also had some recommendations for those of us who’d love to automate some of the more boring parts of our job. “Always ask yourself what something you do that you find incredibly dull, repetitive, and unnecessary. Wonder, even if it is a phone call, why is this person calling, why am I copying and pasting too much, why do I need to send this report every day if nobody seems to care for it? Ask questions and look for solutions. Luckily, those are the things that computers still have a hard time doing.”

Though automation can be a real time-saver like in this internet user’s case, it doesn’t always have a positive effect. Automation disrupts the job industry and, at least in the short term, can mean job losses.

For example, Eddy Ng, previously the James and Elizabeth Freeman Professor of Management at Bucknell University, currently the Smith Professor of Equity & Inclusion in Business at Queen’s University, told Bored Panda some time ago about some of the effects that the Covid-19 pandemic had.

Eddy noted that the pandemic greatly affected women in the workforce, particularly racialized women. The latter, according to the professor, are “often employed in low-skill jobs and in industries that are primed to be automated.” This means that their jobs are vulnerable.

“Think meatpacking, grocery shopping, and other service-based jobs. The pandemic accelerated the automation because of health and safety needs. It also temporarily or permanently eliminated many service and hospitality jobs because of lockdowns.”

Here’s how some redditors reacted to the story. Some of them were in awe of the author’s brilliant idea 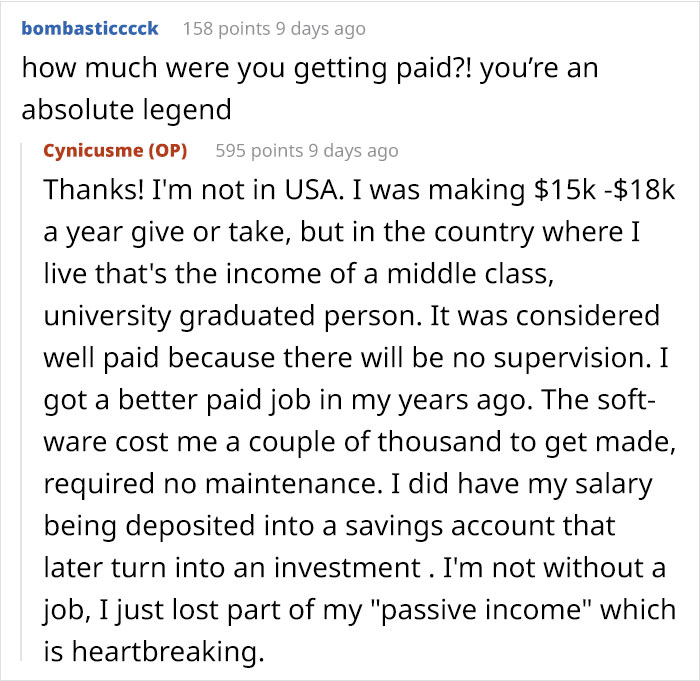 The redditor’s fascinating story drew a lot of readers in. At the time of writing, u/Cynicusme’s post had nearly 90k upvotes, as well as just over 3.5k comments. What’s more, some redditors liked the story so much, they couldn’t help but give the author of the post an award. They got around 350 of these (and we might be a bit jealous!).

The most fascinating thing, for me, was that u/Cynicusme was considered to be the best, most efficient, and most hard-working employee in their department. He even got a couple of salary raises. What’s more, he was even offered a few promotions and new positions during the daytime. However, the redditor rejected these because he knew he’d be found out.

He also kept up their automated night-shift duties while working another job. However, like all good things, this, too, came to an end. Eventually, the company developed new software that made the redditor’s duties redundant. Though, keep in mind, the author of the post managed to automate his duties by reaching out to a coder and paying him two months’ salary. He took a financial risk to secure long-term gain.

The redditor also noted that he never ever spoke about the automation process to the people closest to them. Not his wife. Not his family. It was only after the author got his severance check that he was comfortable enough to reveal his darkest work secret online. Albeit, anonymously.

The post Employee Automated His Job, Got Paid To Do Nothing For 5 Years first appeared on Bored Panda.