In life, you can’t always have it all. If you want to get a good night’s sleep every evening, there will be times where you have to sacrifice your social life. If you want to excel in your career, you’ll likely have to choose between a thriving social life or getting enough rest.

For a job well done, it’s usually important to consider the quality and quantity of your work, but you can’t focus on them both equally. Quality might seem like the most important factor, but when you’re getting paid to complete a task in a timely manner, you don’t have the luxury of taking all the time in the world. One welder on Reddit understands finding the balance between these two important q’s, but his boss, on the other hand, seems to want to have it all: extreme efficiency and accuracy.

Below, you’ll find a story the welder recently shared online detailing how he maliciously complied to his boss’ demand to work 100% accurately, as well as an interview with the welder himself and some of the responses amused readers have left on his post. Enjoy checking out this story, pandas, and then if you’re interested in reading another Bored Panda article featuring malicious compliance in the workplace, look no further than right here!

After being called out for not working 100% accurately, this welder decided to maliciously comply with his boss’ demands 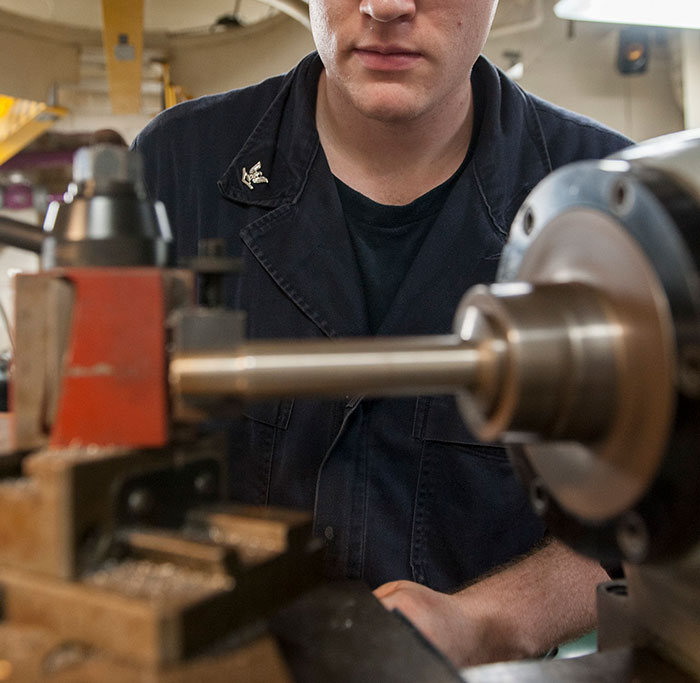 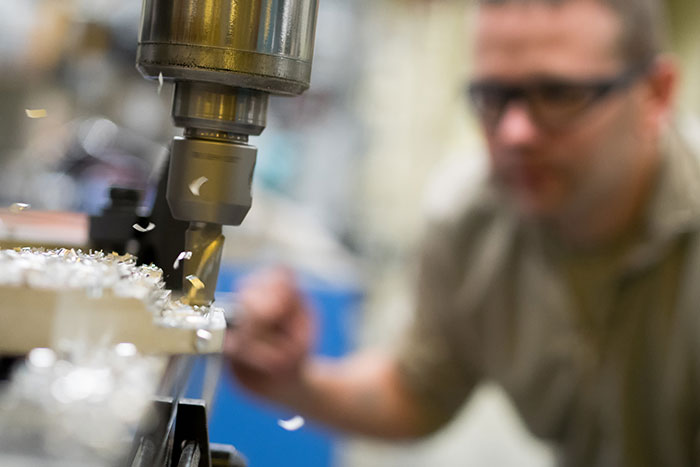 However, in this particular case on Reddit, the welder was still working incredibly accurately, while managing to do 5x the amount of work as his colleague. We all know that the chances for error will increase the more work an employee takes on, but making mistakes 1% of the time does not seem like anything to be concerned about. Especially considering that the OP noted he would always correct any errors by the end of his shift, so he was never wasting time or materials.

To learn more about this specific situation, we reached out to the welder himself, Reddit user Ok_Present_6508, who was kind enough to have a chat with Bored Panda. He shared that this story actually took place roughly a decade ago, but he recently subscribed to r/MaliciousCompliance and enjoyed reading the stories, so he decided to join in on the conversation.

We were curious if Ok_Present_6508 ended up returning to his regular quantity of work following this whole debacle. “I did increase my productivity again. It still amazes me how many people on Reddit still don’t understand that 1% failure, that is repair and passed by the end of the day, is still a 100% pass rate,” he shared.

“The coworker in question was actually pretty lazy and spent a lot of time off task. My pass/fail rate was still pretty above average for the shop and on par with the guys working swing shift,” he went on to explain. 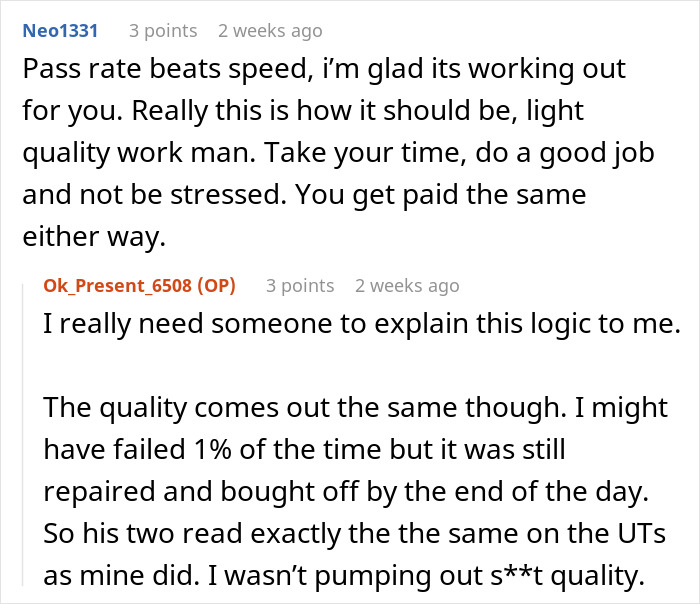 We also asked if the foreman learned anything from this experience. “He did learn his lesson. He, of course, wouldn’t admit that, but I started being able to pick up some overtime on the job,” Ok_Present_6508 told Bored Panda.

But unfortunately, that wasn’t the reward his past self thought it was. “That foreman was kind of full of himself,” he explained. “His work area had ‘inspirational’ quotes posted up around his area that he quoted himself, if that makes sense. For example, it would say something like, ‘Opportunities don’t happen, you create them.’ – D. [his last name] like that. I wish I could remember some of them, but they were eye-roll worthy.”

We also asked Ok_Present_6508 why it’s important for bosses to listen to their employees concerns and understand where they’re coming from in situations like this. “I think it’s important that every employee gets the opportunity to work overtime,” he told Bored Panda. “It sucks, but the money is cool. Trying to make it seem like an exclusive club sends the wrong message about it. Nobody should want to work overtime, and employers shouldn’t make it seem like something they want you to work either.”

“And obviously, trust is a two-way street,” he added. “If your boss doesn’t trust you, then your subordinates aren’t going to reciprocate that trust. It just causes unneeded tension.”

“That’s something I’ve learned over the last 19 years in my career: treating your employees like they’re people, and showing them respect and kindness goes a long way,” Ok_Present_6508 shared. “We’re all here at work together for the majority of our lives. I don’t go home and be a [jerk] to my family, so why should I be [jerk] to the people that I spend so much time with!”

We would love to hear your thoughts on this situation in the comments, pandas. Have you ever had to deal with an employer who wouldn’t listen to your concerns? Feel free to share any of your personal stories down below, and then if you’re interested in checking out another Bored Panda article featuring malicious compliance in the workplace, we recommend reading this story next!

Not everyone was on this employee’s side though, as some readers were a bit more critical with their responses and queries 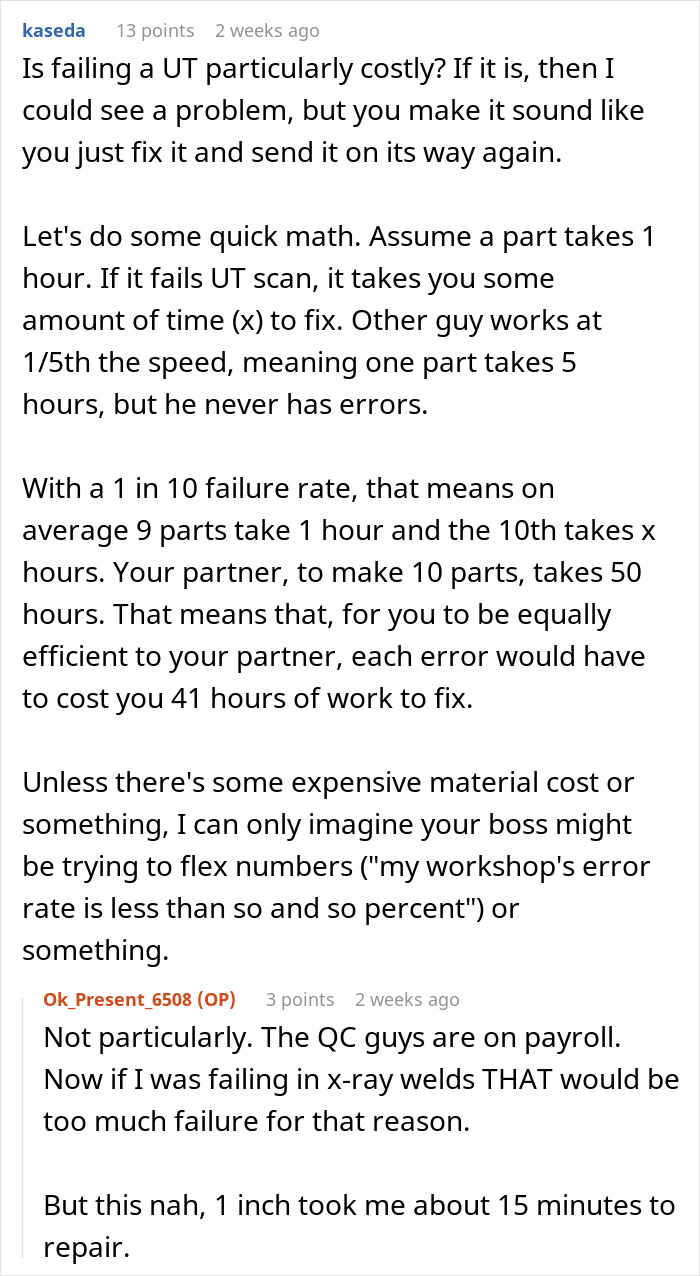 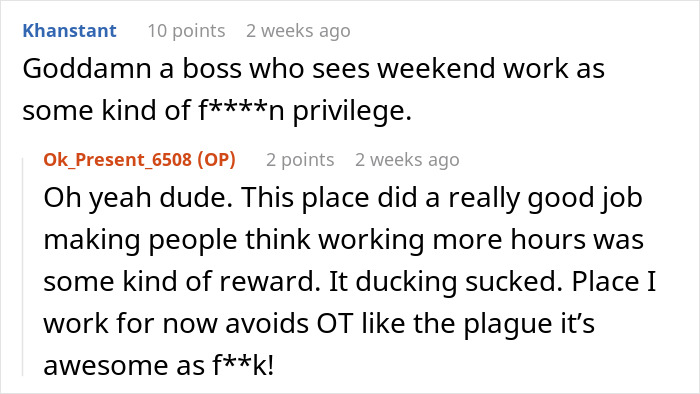 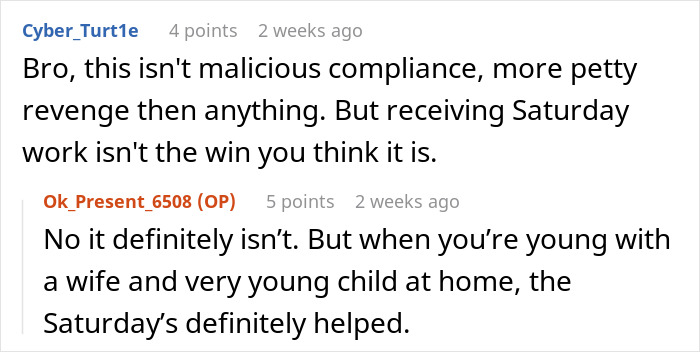 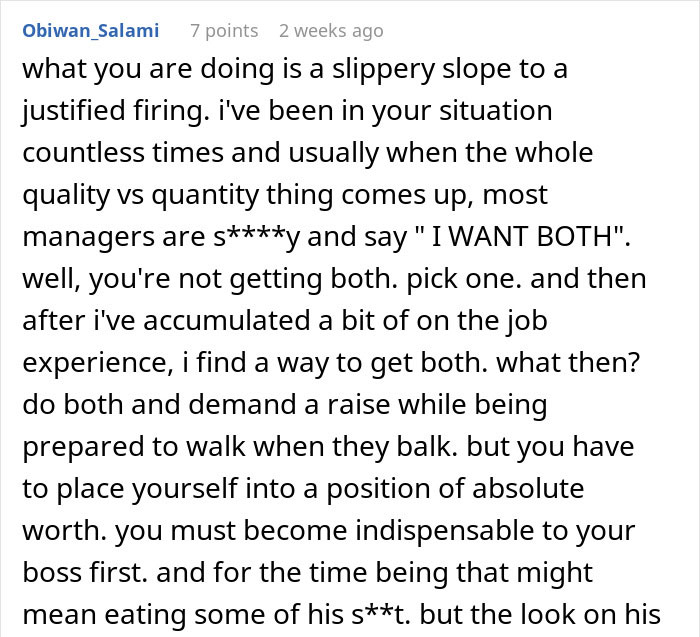 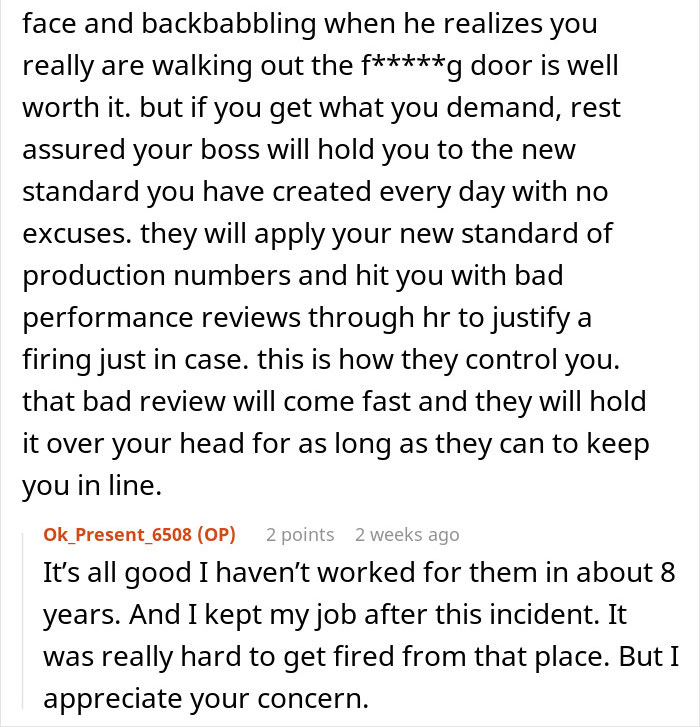 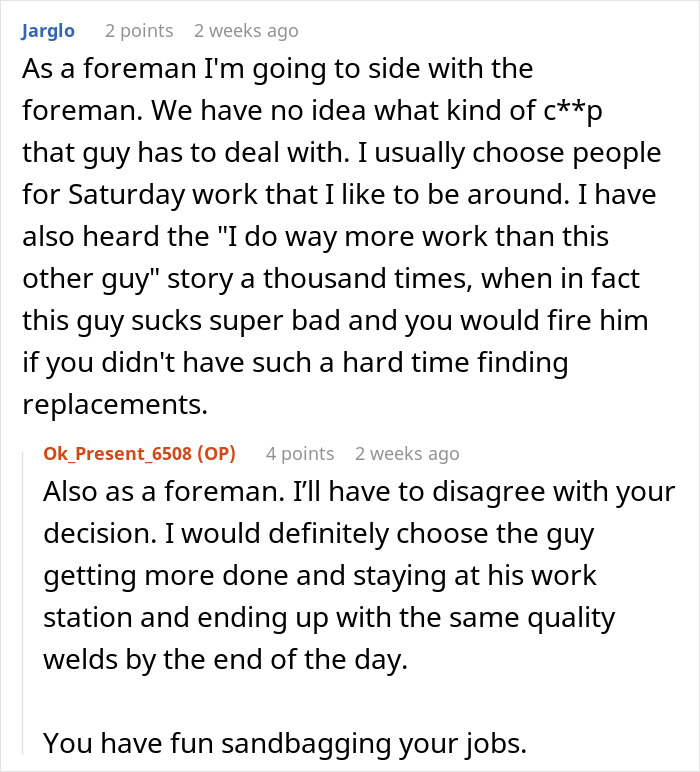 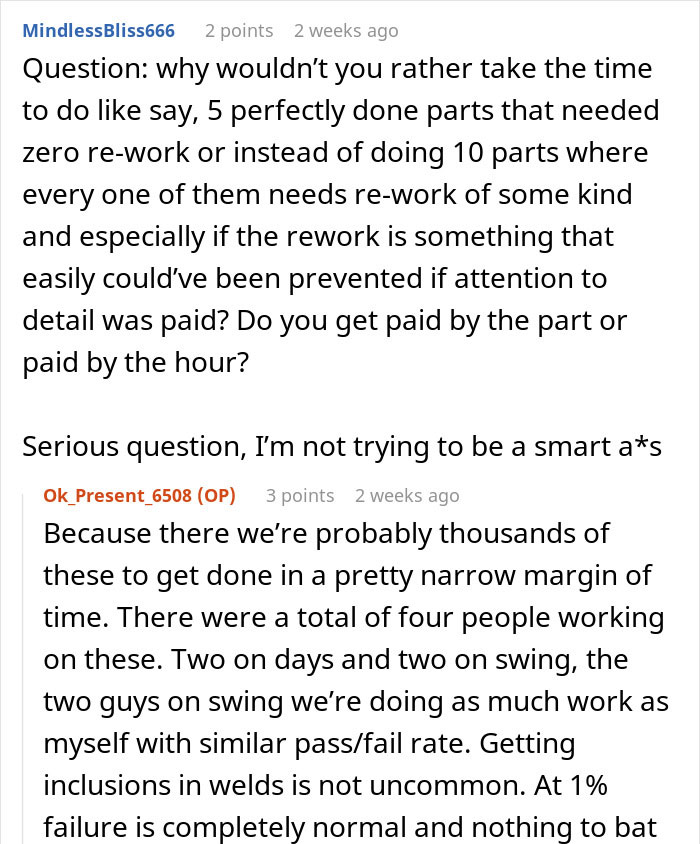 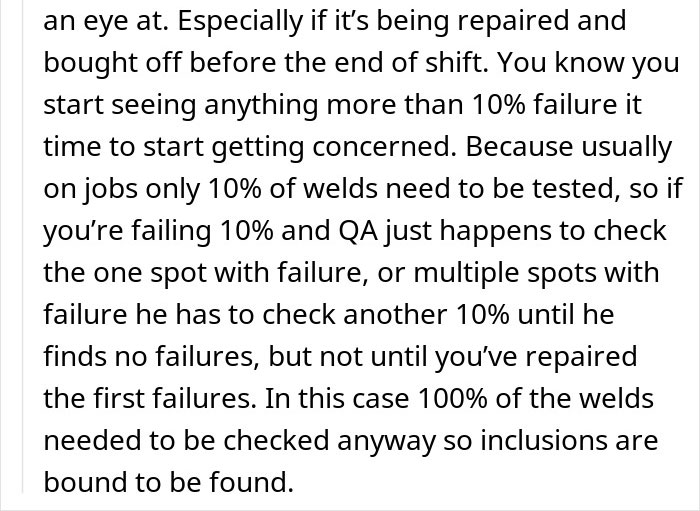 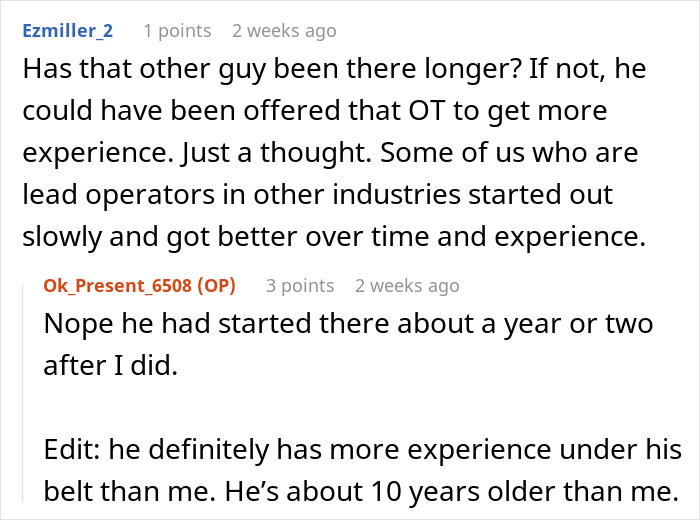 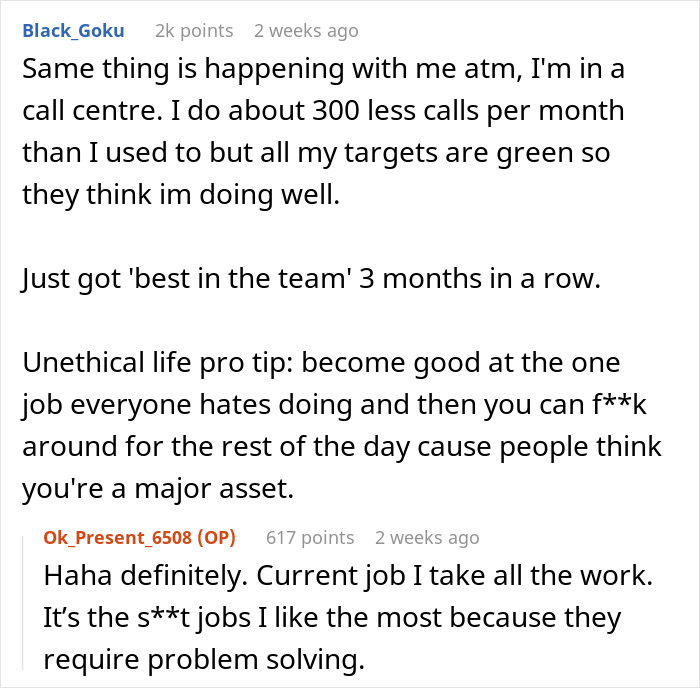 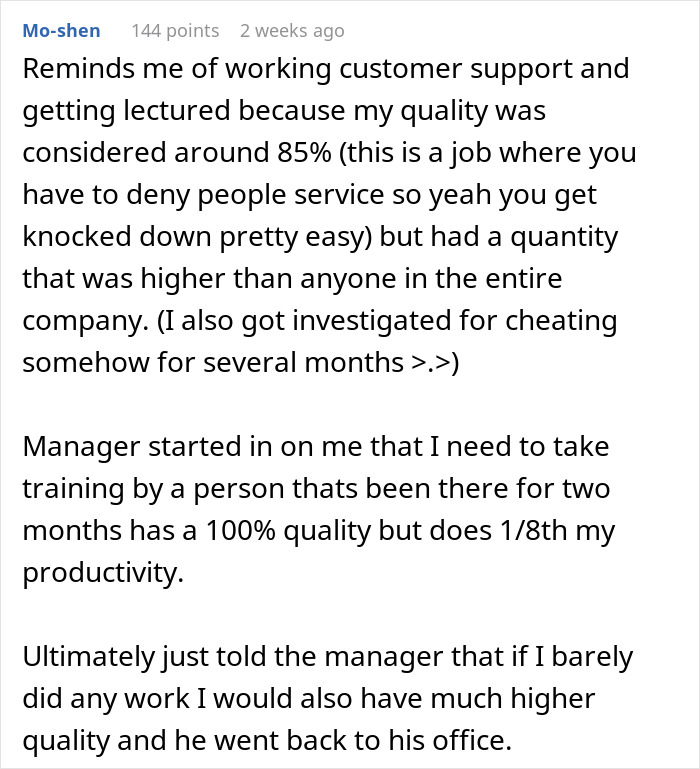 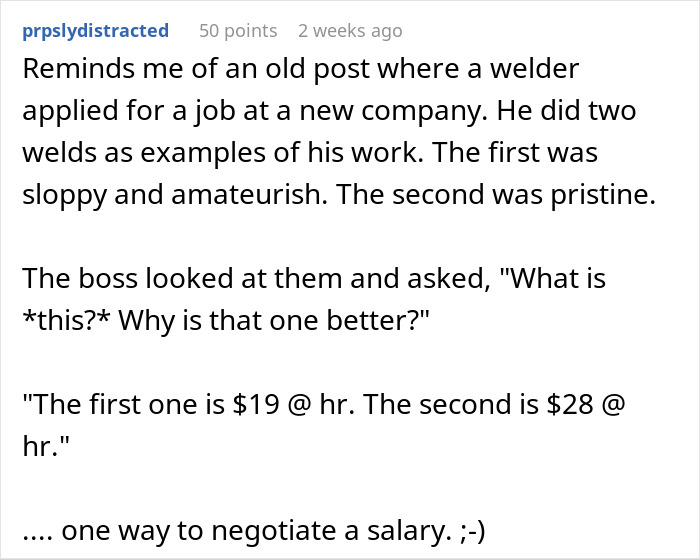 The post Employee Decides To Stop Doing So Much Work Because Boss Wants Quality Over Quantity first appeared on Bored Panda.