People online have shared so many stories of their crazy and inconsiderate managers who don’t let their employees have sick days or don’t protect them when a lunatic customer is demanding something absurd. Employees often feel underappreciated and work might become unbearable.

The manager in this story is probably one of the worst of them, because it involved money that belonged to the employee but they didn’t receive it. The employee went on Reddit to vent and after hearing advice from people on the internet, decided they must quit because it’s not worth working in a place with a manager who steals the tips you’ve earned. 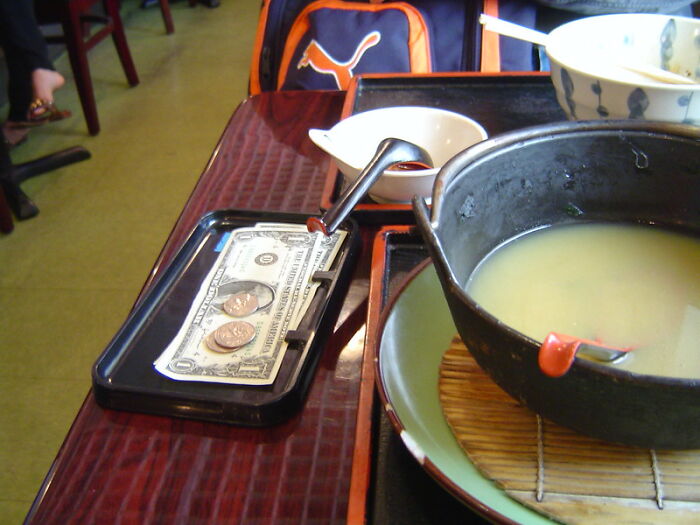 The Original Poster (OP) has already deleted their account despite just having written the post, but still left the story on Reddit that already received 105k upvotes in less than 24 hours. It might be because the OP asked for 1 upvote so that they would get encouragement to quit their job. So more than 100k people showed their support and thought that it was a good idea.

They also gave advice on what to do before leaving, such as not to wait the 2 weeks as they are not mandatory, so the OP might be free already.

The employee recently started to work at a pizza place in Washington state. It is unclear how old the employee is, but they said they had been working since they were 14, so we might assume that they have plenty of experience, especially as they noted that they’ve had a few different bosses before and they were always horrible. So much so that the OP almost got so used to unethical behavior that they didn’t even notice it or just didn’t mind it when they saw it.

The red flags started during the job interview. The OP said that the manager talked about his medical issues the whole time, and that is not a usual topic to discuss during the interview. Then, only a few weeks after the employee started working there, a delivery driver quit the job because he was always treated like he was less of a human and was constantly belittled by the manager.

The OP says that the manager actually always talks behind everyone’s backs and verbally abuses them, even the people who enter the store, let alone the staff. The employee regrets not leaving then, but their reason for staying was that they were earning 30 cents above the minimum wage for being a Team Leader and then the situation seemed not that bad.

Also, considering that they’ve never had a normal manager who treated employees like humans, that might have clouded their judgement. But seeing the manager stealing tips was a wake up call. 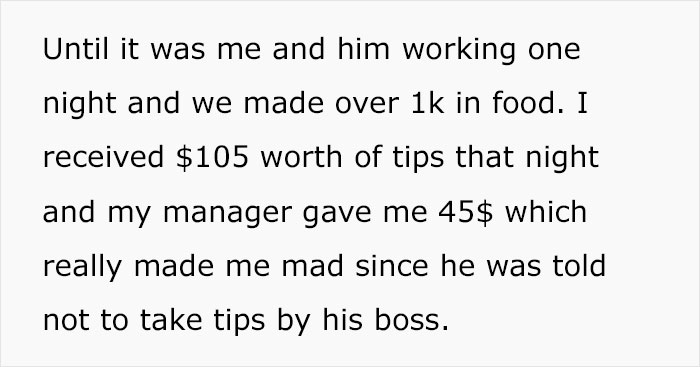 What made the OP decide to quit was when they worked with the manager together and the employee made $105 of tips. They received only $45 as the manager took the rest, even though the manager’s boss told him to not do that.

Also, according to the US Department of Labor, “a tip is the sole property of the tipped employee” and anyone who is supervisor-level shouldn’t get them, so the manager in this story was not only being unethical, but actually breaking the law.

But when they didn’t receive their full tips one night, they started to realize that the manager was actually not only a really bad person, but was also breaking the law 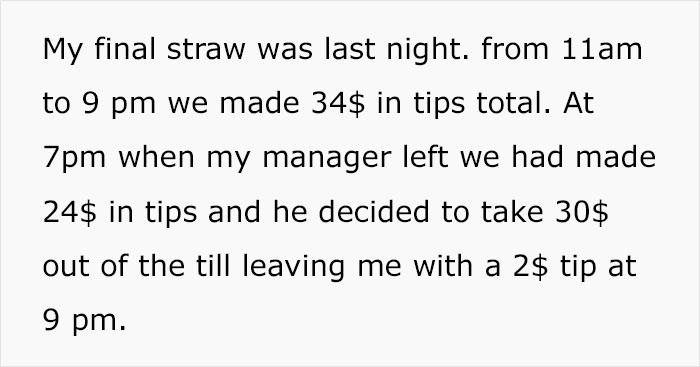 It didn’t happen just once, and the last time it happened, the OP received only $2 because the manager took the rest of it. He took tips when he wasn’t even working, even though he shouldn’t do that ever.

The manager in this story is depicted as a really horrible person and professional, so it is no wonder that the whole staff wants to leave. In an update, the OP said that they have decided to leave that workplace and they won’t even give 2 weeks’ notice and will just do it.

A lot of people in the comments were also suggesting to report this manager’s behavior before leaving and were congratulating the OP on a very smart decision. They thought that the OP planning on giving 2 weeks’ notice was generous and that they shouldn’t do that, as it is not mandatory but more of a polite thing to do so the company or business will know what’s coming.

We would like to hear what you think of this post and whether you’ve ever had any similar experiences. Leave your reactions and your stories in the comments!

The post Employee Was Putting Up With Verbally Abusive Manager But When He Stole Their Earned Tips, They Decided It Was Time To Leave first appeared on Bored Panda.