There’s nothing better than those rare days where you have a shorter work day than normal. Morning after Christmas? Sleep in an extra hour! It’s your birthday? Go ahead and take off an hour early to start the festivities sooner. Have a doctor’s appointment? Alright, just come in as soon as you’re finished. The only important thing about missing a portion of work is that it must be agreed upon by the employer and the employee. A spontaneous late start does no good if you’re already sitting in the parking lot staring at your office building.

One employee recently reached out to the Antiwork subreddit after his boss decided to show up late, just to tell him he wouldn’t be compensated for the time he was supposed to be working. Below, you’ll find the full story, as well as some replies from invested readers, and then feel free to let us know in the comments how you would have responded in this situation.

We would love to hear your thoughts, and then if you’re interested in checking out another Bored Panda article featuring workplace drama that’s been shared on r/Antiwork, look no further than right here!

After his boss decided to show up late, this employee was promptly informed that he wouldn’t be compensated for “sitting in his car” 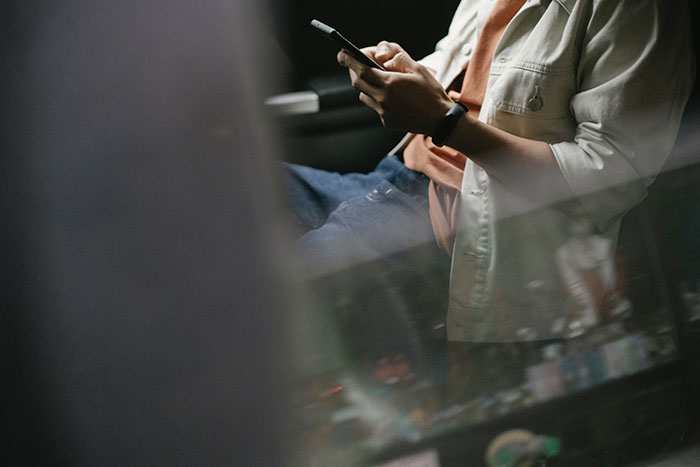 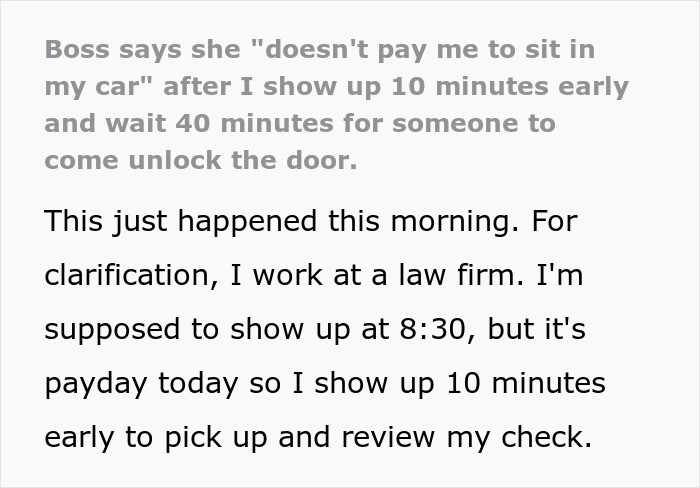 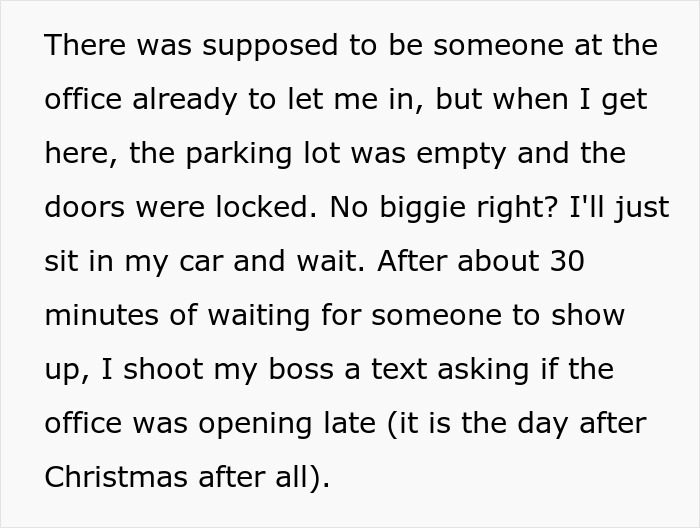 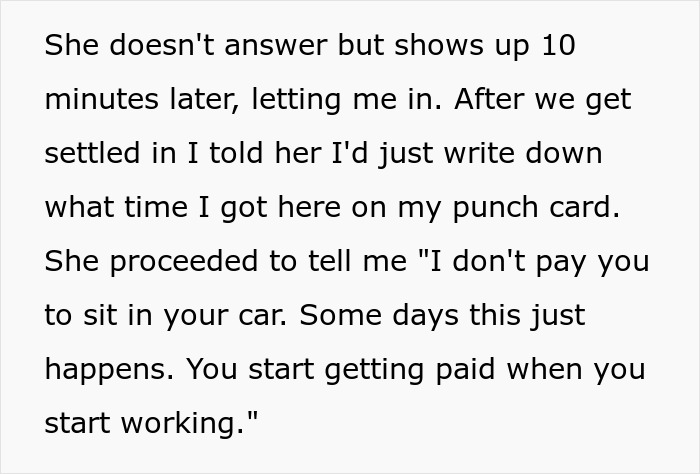 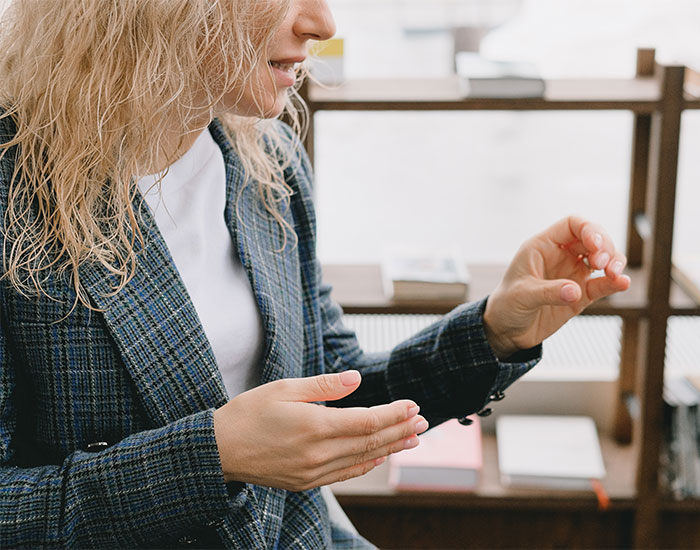 The employee later provided additional details, sharing that he noted the incident on his time card 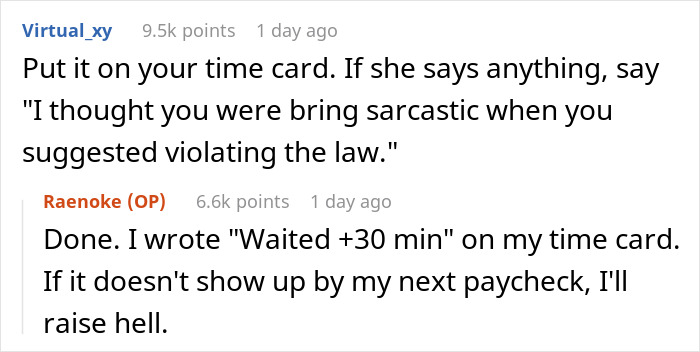 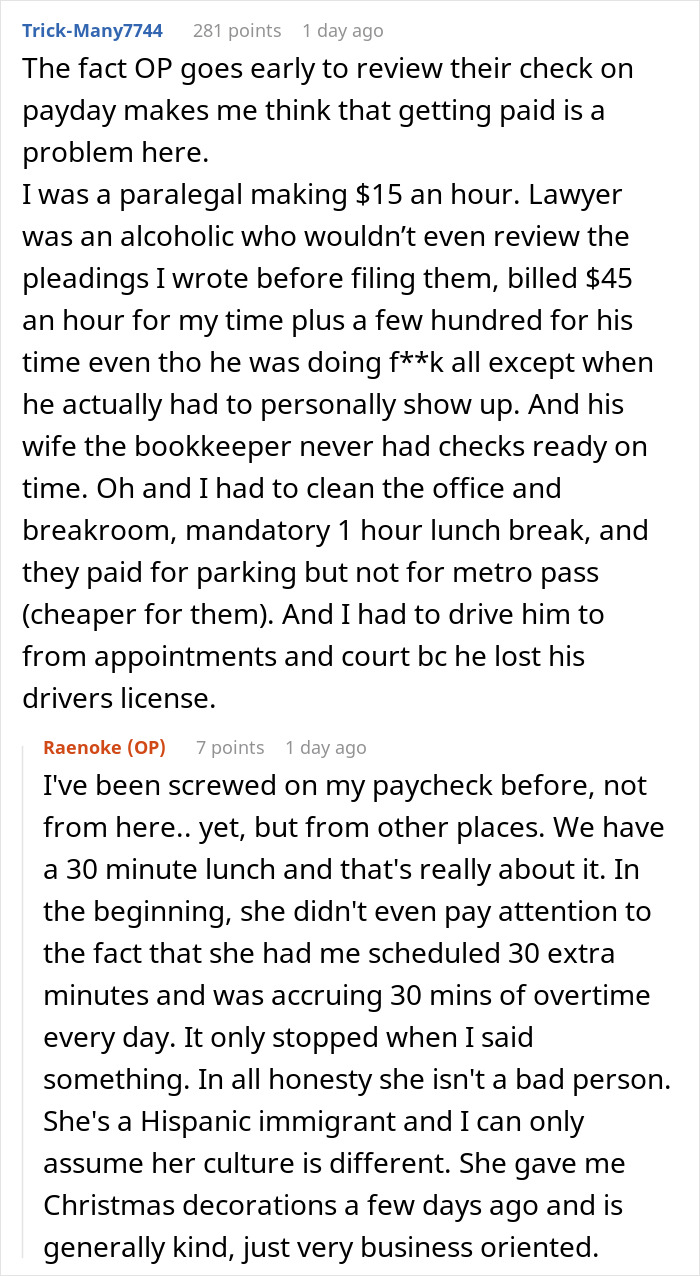 We all know that our employers are required to pay us for the time we’re at work, but clearly, this woman was feeling like an Ebenezer Scrooge when she rolled up to the office the morning after Christmas. It’s obvious that the budget includes enough money to pay this worker for his full hours, as the employer was never supposed to be late in the first place, so what’s the problem with him clocking in at his regular time? He was never informed that he could show up late, and he certainly would have been working those entire 40 minutes if the office had been unlocked. It is ridiculous to punish him for his boss showing up late.

Thankfully, the employee noted on Reddit that he did report his clock in time as when he was supposed to start working because working “off the clock” is illegal. Technically, he was not sitting at his desk doing work during this time, but he was waiting around and unable to be anywhere else or get anything else accomplished. According to Hourly, under the Fair Labor Standards Act, employers in the United States are not legally allowed to ask their employees to be at work or be working without pay.

“‘Off the clock’ is a blanket term that covers any hours you a) work outside of your regular shift, and b) don’t officially clock in for—and, as such, aren’t compensated for,” Hourly explains. “For example, if a restaurant owner asks their waitstaff to come in early to set the tables—but doesn’t allow them to clock in until their scheduled shift starts—that would be working off the clock.”

“Some employers will either ask employees to put in hours off the clock—or, if they don’t flat-out ask, will hint that it’s expected if they want to succeed at the company or be considered a ‘team player’,” Hourly continues. “But if you’re a non-exempt employee, your employer can’t ask you to work ‘off the clock’. It’s completely illegal—and if you’ve worked off the clock hours, you can file a complaint with the Department of Labor and may be able to recover back wages and collect back pay for any hours you worked that you weren’t compensated for.”

Only time will tell if this employee’s paycheck reflects all of the hours he was working, or at work sitting in the parking lot, but as he works at a law firm, I would hope that his boss understands the ramifications of compensating her employees unfairly. We would love to hear your thoughts on this situation in the comments, pandas, and then if you’re interested in checking out another article highlighting workplace drama that was shared on the Antiwork subreddit, look no further than right here! 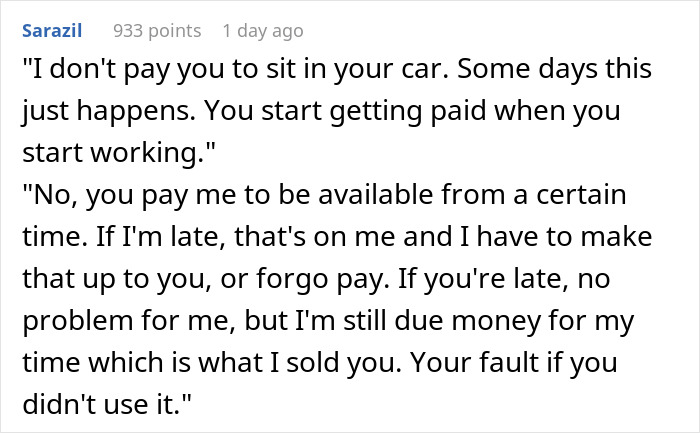 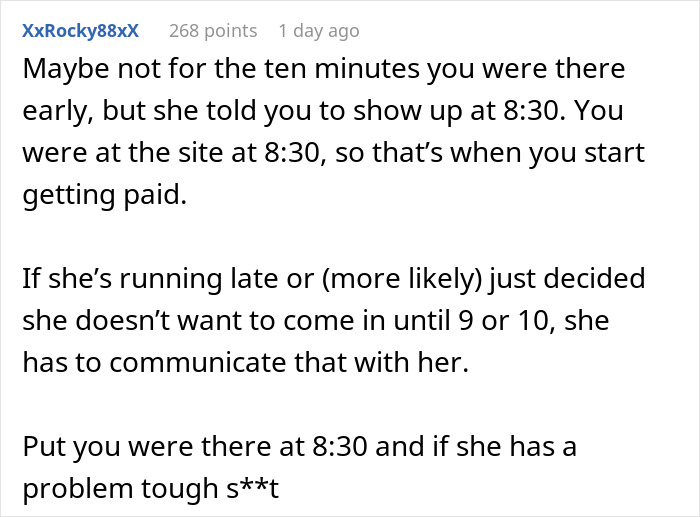 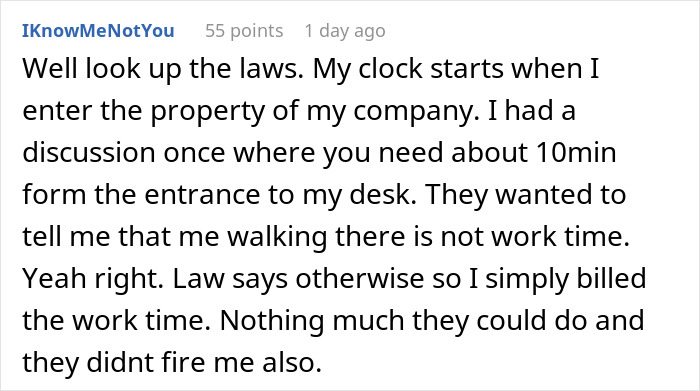 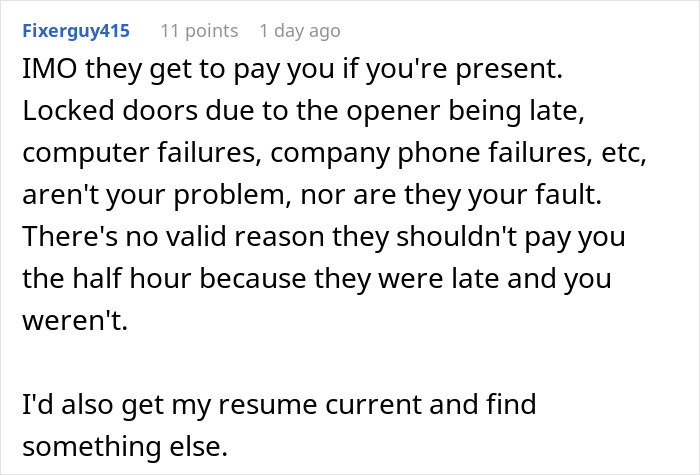 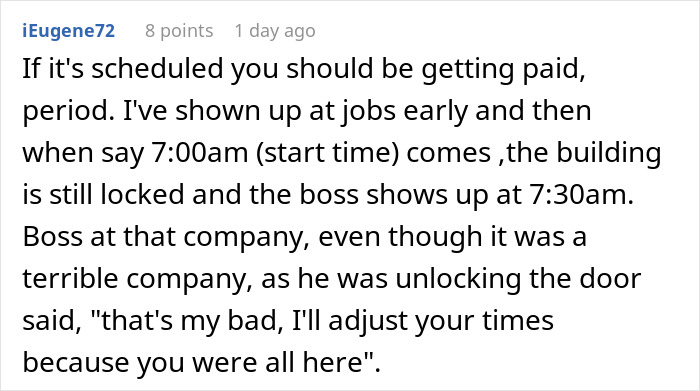 Some even shared similar, personal experiences they’ve had at work 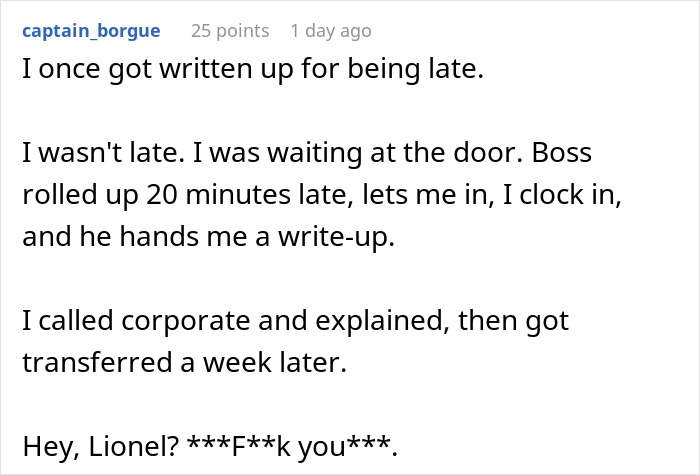 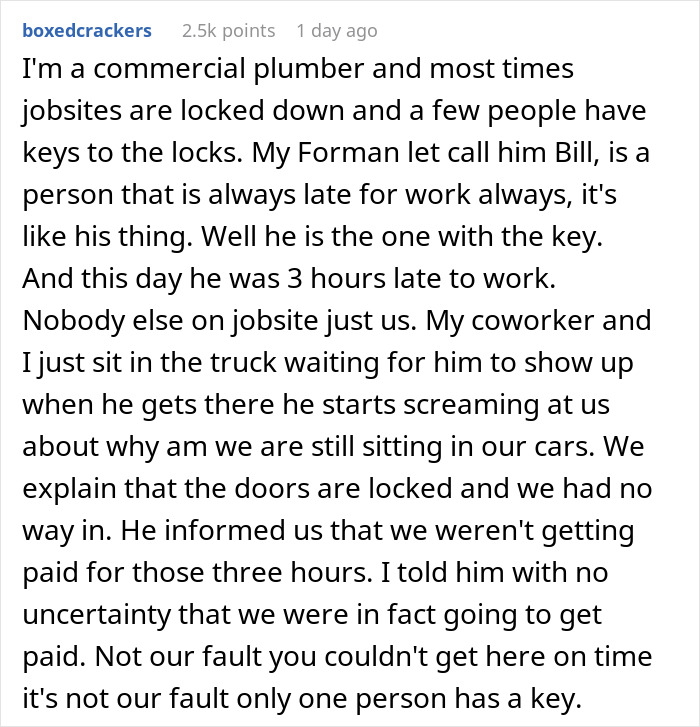 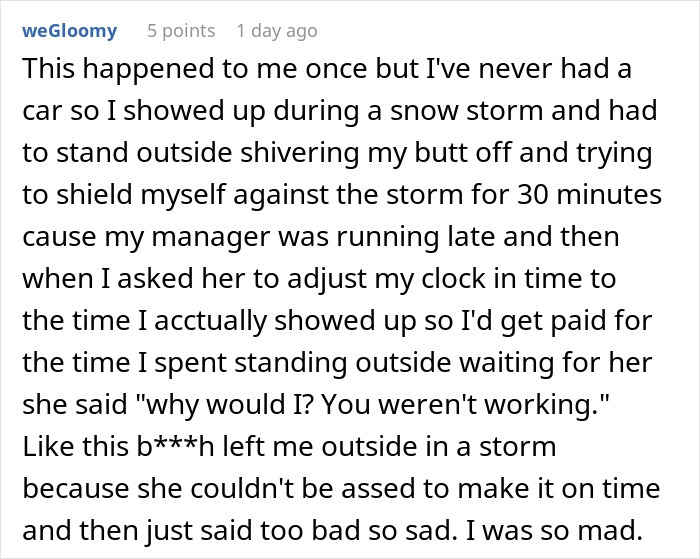 The post Employee Wonders If He’s In The Wrong After Boss Tells Him He’s Not Getting Paid For Waiting In His Car For 40 Mins After She’s Late first appeared on Bored Panda.