Many people roll their eyes when they hear such phrases as “we’re not just co-workers, we are family” in the workplace, especially coming from the higher ups. It is because the bosses imply that they will treat their employees with care and compassion but that is rarely the case.

However, in rare instances, coworkers do become family and there are humane and fun managers that they feel a real connection with. Turns out, the staff that worked at a bagel shop in California liked their manager so much that when they found out she was fired for practically no reason, they all just quit their jobs in solidarity. 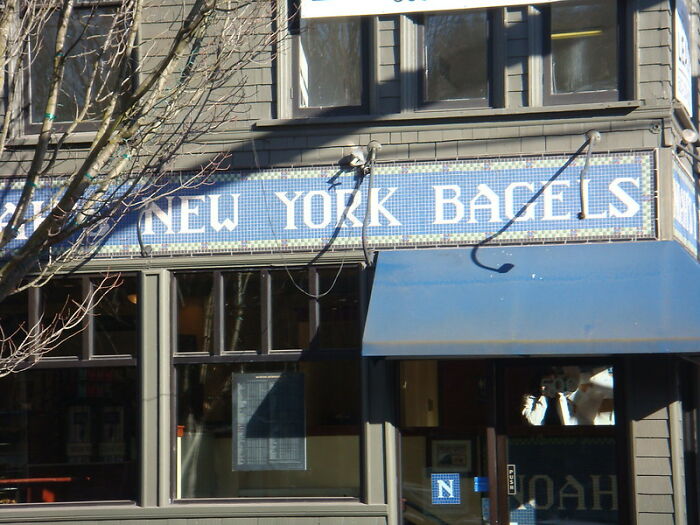 This whole story started with a 10-second video on TikTok in which you can see a group of people walking towards a Noah’s Bagels shop. The text on the video said “When the whole team pulls up on the same day to quit.”

The video quickly blew up and now sits with 9.3 million views. Because it attracted so much attention on the app, the person who posted it, Beonce Sarmiento, made a few videos explaining the situation in more detail. 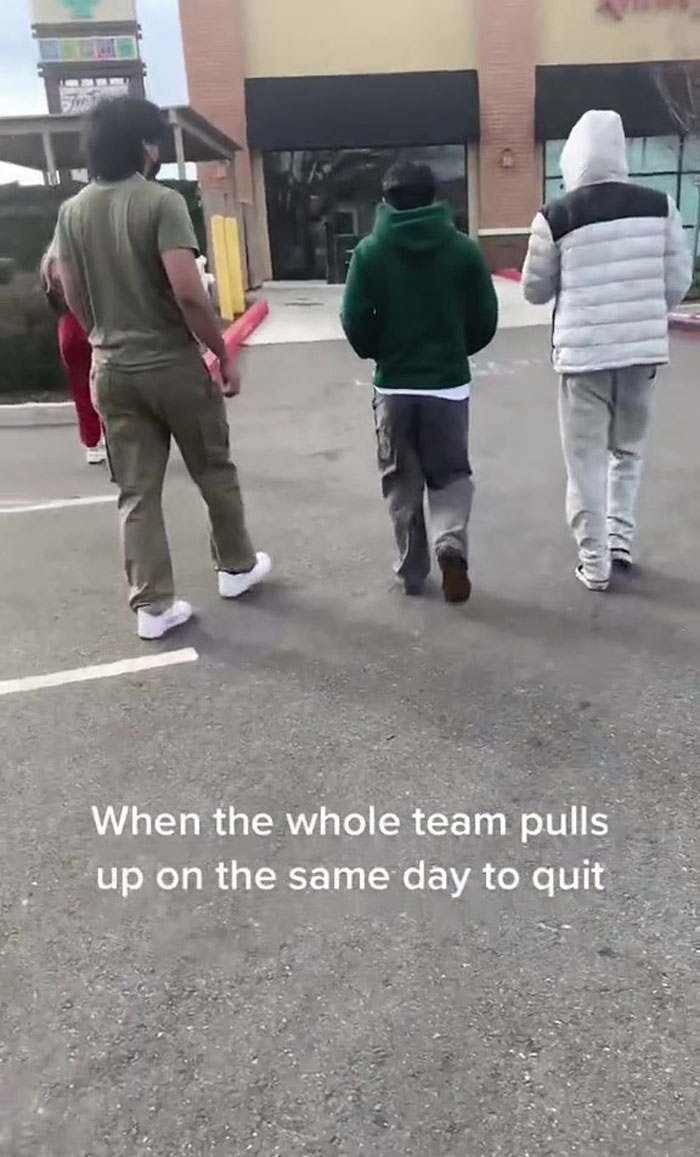 The company was already trying to replace the manager, but when she wasn’t willing to transfer, the two new general managers started searching for reasons to fire her 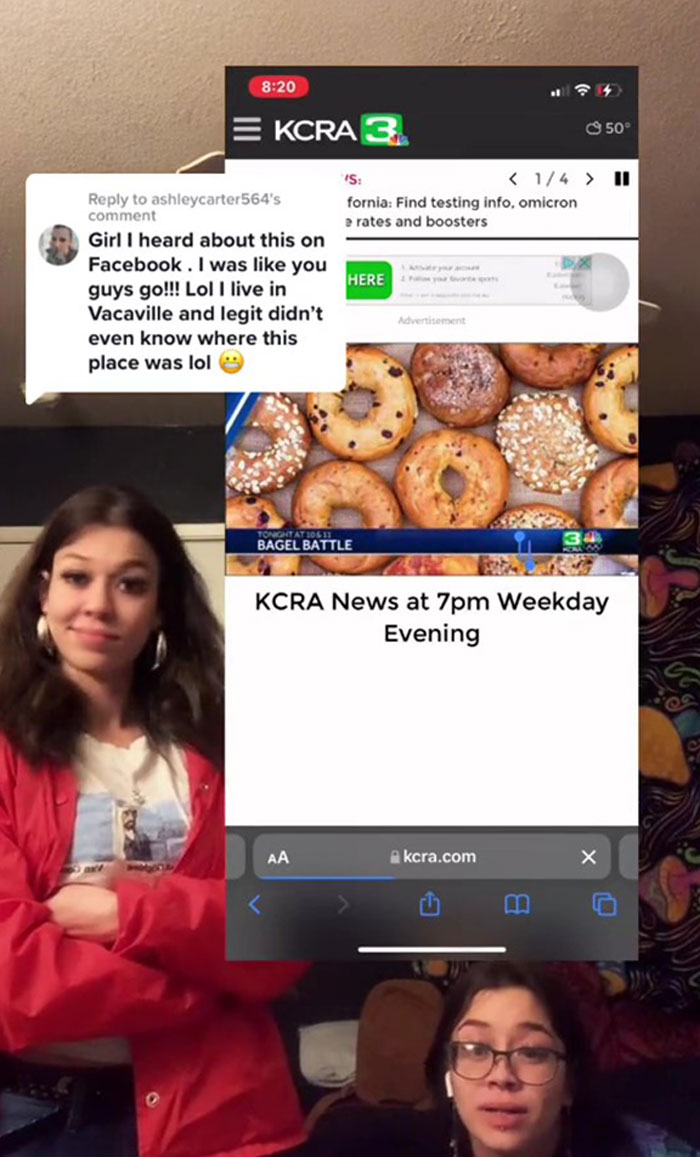 Apparently, the team really liked their shop’s general manager Bre Kowalski, but for some reason, her bosses wanted her to be transferred, so when the new general managers came that should have taken her place, Bre refused to leave.

They couldn’t fire her just like that, so they started to observe her more closely and nitpick everything she did, but nothing she had done was so serious that they could justify firing her. Until, of course, one day when Bre was not in the shop and there was an extra deposit that needed to be brought to the bank. The other general managers saw it as an opportunity to finish this matter and reported it to their boss. 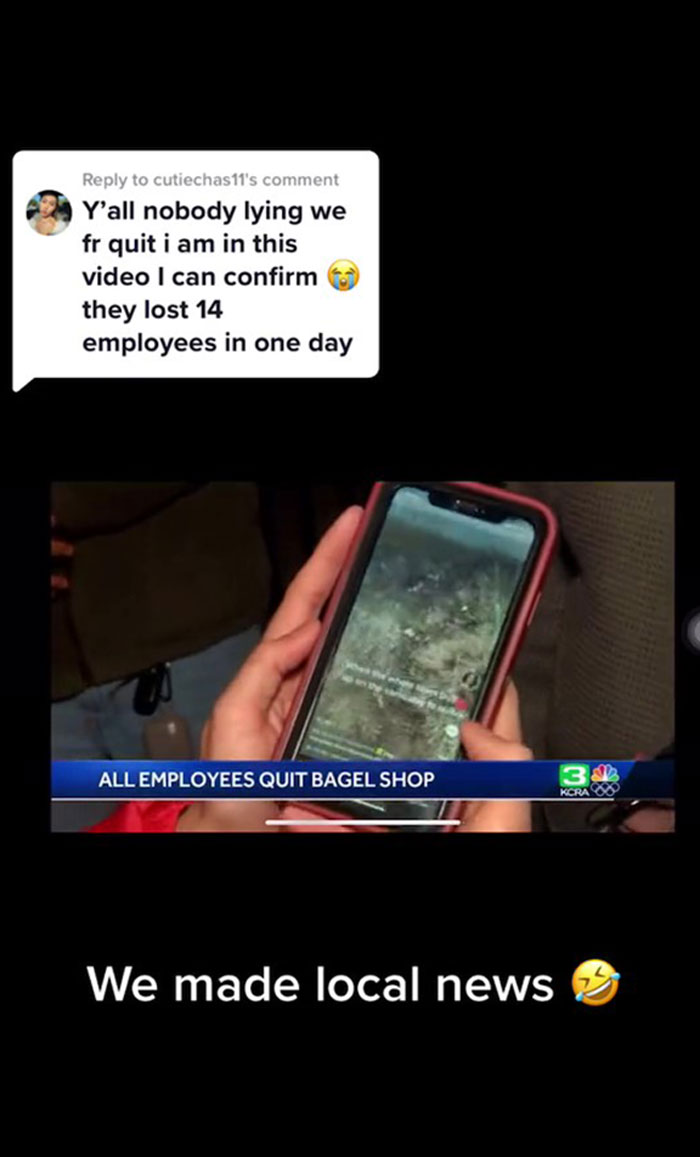 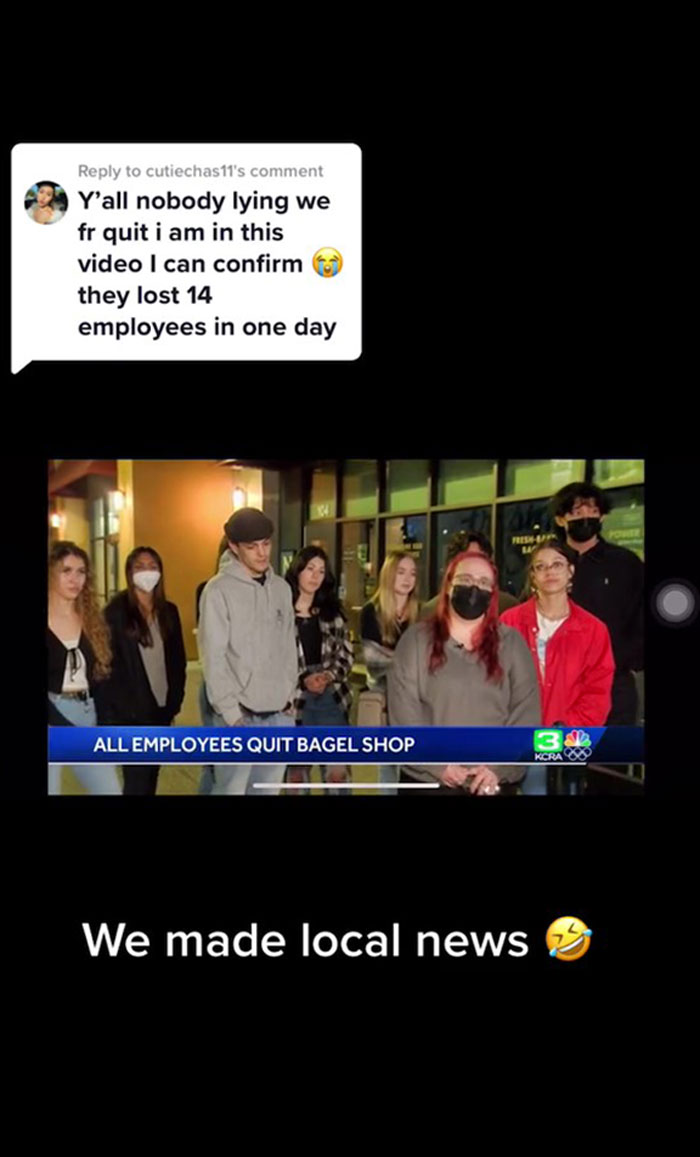 After a few days, Bre got a text that she was suspended. She didn’t receive an explanation why and was confused, but when she got home, however, Bre noticed that she had received her salary, which was weird as she had gotten her paycheck a couple of days earlier.

Bre called her boss to find out what was happening and was told she had been terminated. Nobody had warned her about it nor talked about it. She was suspended with no explanation or a chance to fix her mistake, she was just fired. 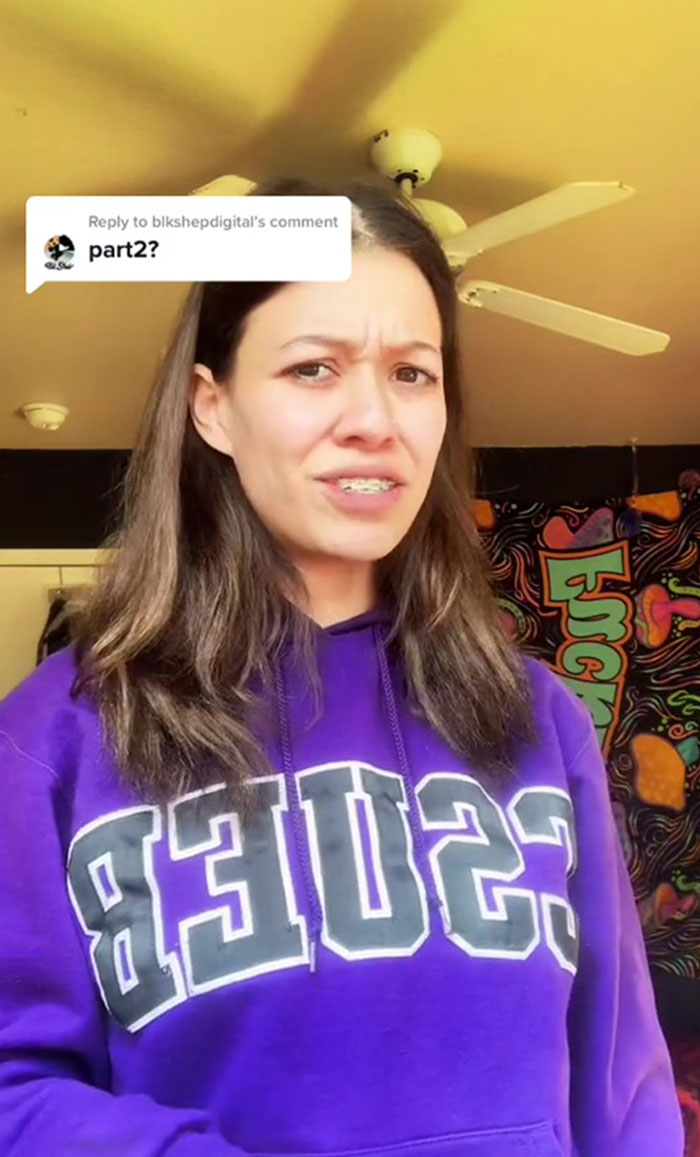 In another video Beonce explained that they didn’t quit only because of Bre. The workplace was problematic even before that. They were not treated with respect and they were not paid that well. Seeing Bre being treated that way was just the last straw.

They found out that even before they quit their jobs, they were seen as disposable and easily replaceable and the other managers knew about their opinions about Bre being fired, so were planning on firing them anyway. 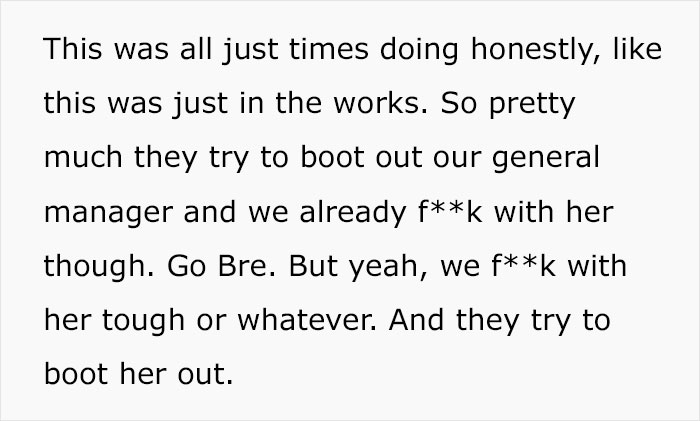 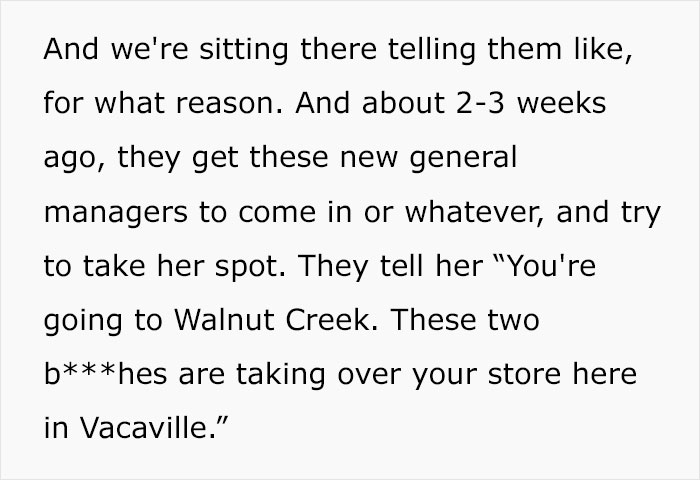 Many people in the comments admired the employees for showing solidarity and giving a clear sign to the company that they can’t treat people like that. Others were concerned that this was irresponsible and nobody would want to hire them after such a scandal.

Beonce assured her audience that everyone who quit either had savings in their accounts or the bagel shop was their second income so they didn’t just quit without having any financial stability. Also, the TikToker said that most of her now ex-coworkers have already found new jobs or are receiving offers, so why wouldn’t they quit a place where they are not appreciated if they can afford it?

Turns out, she was actually terminated and she didn’t even know that until she called her boss to figure out what was happening 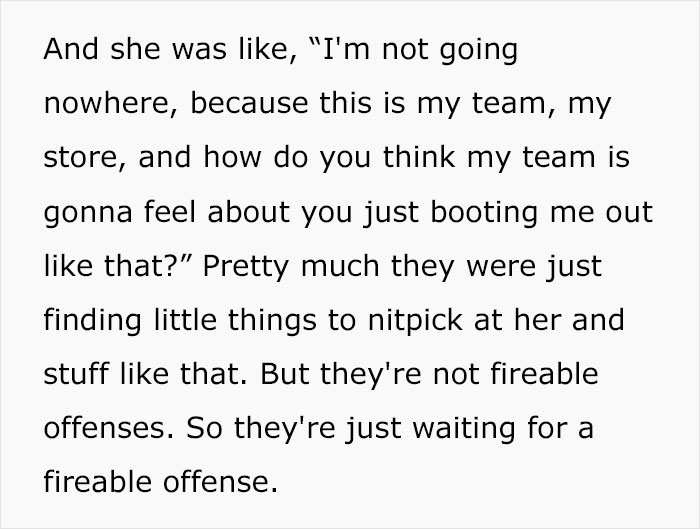 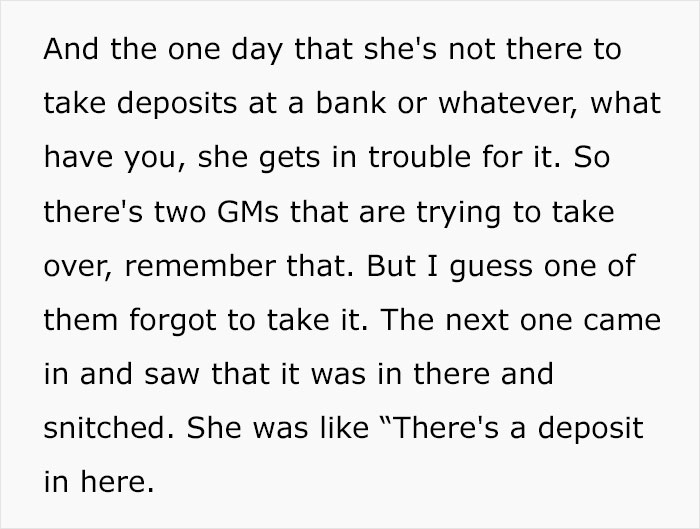 If an employer thinks that an employee is disposable, it’s not hard to imagine that for the employee, the job is also disposable. The younger generation is not afraid to risk it all and leave a workplace if they believe they are worth more than they are getting. Bored Panda actually talked about a tweet that sparked a debate about this and that often the older generation call younger people weak for not being able to suffer in a miserable job. You can find the article here.

Other TikTok users in the comments also pointed out a smart idea: people don’t quit their jobs because most of the time they are bearable, but they quit management, which can make your work day more gloomy or brighter.

When her store employees got the news, they all individually decided they needed to leave this place and went together to quit the same day 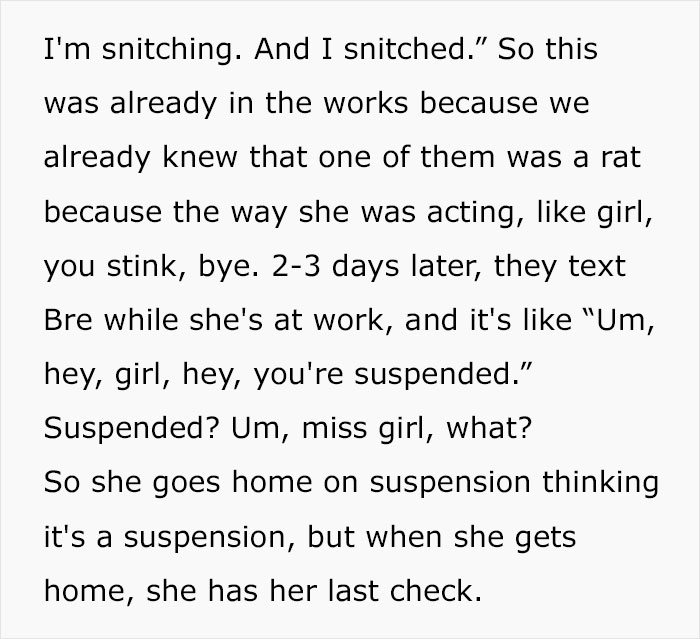 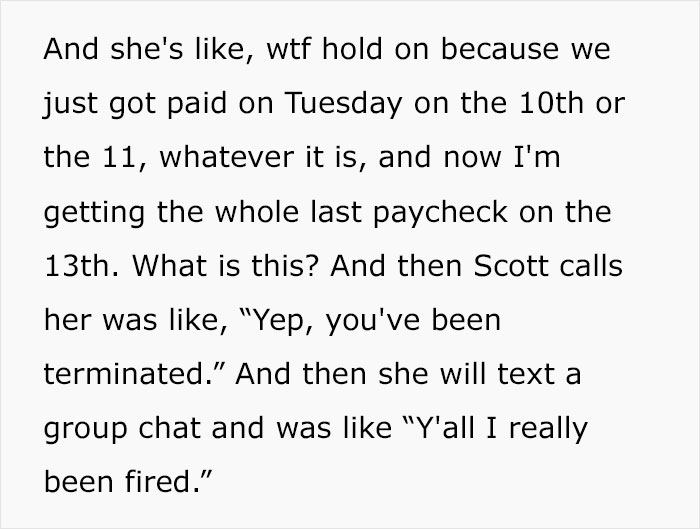 There was a time when people worked 12 hours a day and didn’t have weekends off. They were tired and didn’t have any time to spend with their families and do something they enjoyed for themselves. The braver ones took some action and now we have a shorter work day, we have days off, and many places offer paid vacation time, but maybe this is not good enough anymore. And maybe people like the staff of the bagel shop are the pioneers of a new change that all will benefit from.

We would like to hear what your speculations are and also what you think about the story. Would you participate in a mass quitting to stand for your principles? Do you think the staff overreacted? Also, do you think that Noah’s Bagels will learn their lesson? Let us know your thoughts in the comments!

@_.be.1 Say no to toxic management