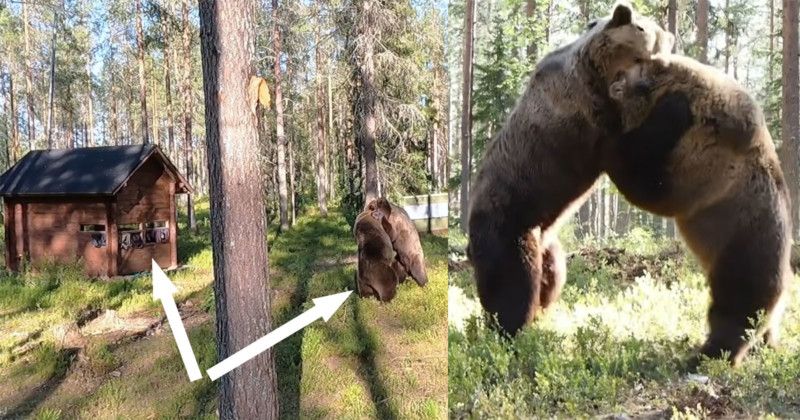 Wildlife camera crew Samulin Matkassa were holed up in a bear bind in Finland when they happened to witness a bear brawl. Two  bears showed up near the team and their hidden cameras. Samuli Kiiveri, Olli Pietilä, and Tuomas Manninen were only expecting a glimpse of a single bear, but their expectations were blown away by what they witnessed:

Shortly after arriving on the scene, two of the large bears decided they didn’t like each other.

“Two of the bears were pretty much the same size and they started to roar very loudly to each other and moments later they engaged in a fierce brawl,” the crew says. “According to experts, they wouldn’t fight so brutally over food only. It is about the dominance of the area, because females prefer stronger males.”

Locals later told the crew that there had only been a single report of a bear fight of this magnitude in the wildlife area over the past decade and a half. Luckily for Samulin Matkassa, they were able to capture the rare sight with multiple cameras and from super close range.

“The whole scene, starting with the extremely loud roars followed up by a big fight, was an experience that left the whole film crew speechless and even confused for a while,” Samulin Matkassa says. “Truly a once-in-a-lifetime experience.”