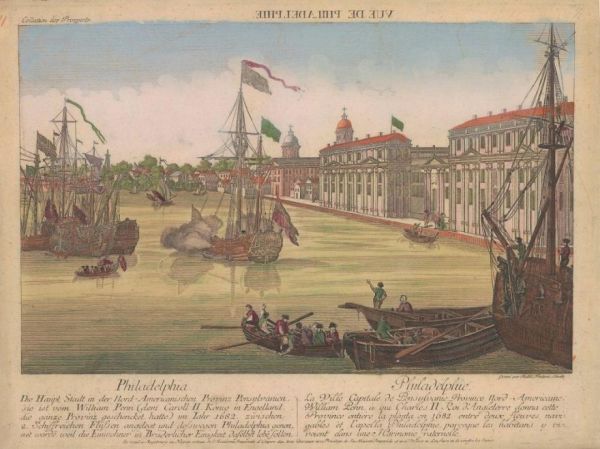 In the 18th century, Europeans were amazed at the imports coming in from the New World at the same time they said goodbye to friends and neighbors who set off for America and never returned. Those long sea voyages meant scant mail, and it was rare for an artist to bring back their impressions. Oh, those artworks existed, but they weren’t mass-produced everywhere. People wanted to see America, or at least pictures of it. A few printmakers set to work fulfilling their wishes, even though they were pretty much working blind.

During the 1770s and 1780s, German engravers Balthasar Friedrich Leizelt and Franz Xaver Habermann created a number of popular vues d’optique, a special kind of print designed to be viewed with an optical device called a zograscope that would make them appear three-dimensional. Many of these prints show various North American places and cities such as Boston, New York, Philadelphia and Quebec City. While the majority of 18th century city views were ultimately derived from some type of manufactured source (be it a drawing, painting or print), what is peculiar about Leizelt and Habermann’s vues d’optique is that they borrow from preexisting views of European places and cities rather than views of the North American cities they were trying to represent.

The difference was that European cities were built slowly over a thousand years, while American communities were built fairly quickly to accommodate European arrivals out of locally available materials. You can see some of Leizelt and Habermann’s works at Smithsonian.

Rating European Printmakers Had No Idea What Colonial American Cities Looked Like, So They Just Made Stuff Up is 5.0 / 5 Votes: 4
Please wait...
Loading...
Related articles