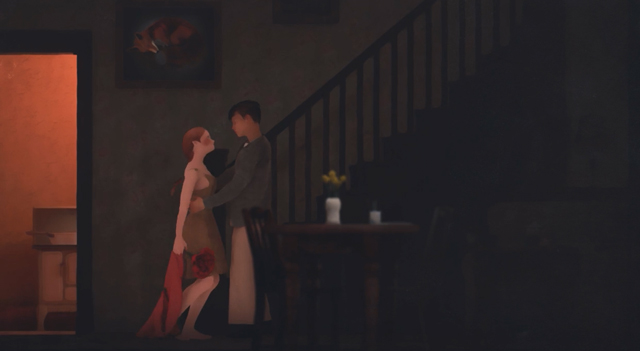 Image and GIFs by the author, via

Caught in a late-night dance, with both parties affectionately pushing and pulling away and from each other, the thrilling animated music video for Dead Seem Old‘s “This Mess Won’t Make Itself” will appeal to romantics and modern lovers alike. The visuals are smoky but clear, reminiscent of realist portraiture, with both its characters and its story jolted alive. Running in a white, summer dress against a velvety-black backdrop, the female character enters a deserted fairgrounds, the wind moving with her as she approaches a flickering ferris wheel.

Hopeful yet darkly romantic, sensual yet pure, a love story is afoot in animator Joseph Blanc’s piece—but don’t let that distract you from some dark, ominous plot development featuring a sly and dangerous fox. The characters wrap each other in their arms, kiss passionately, then give in to each other’s bodies in lyrical dips and lifts. It fits Dead Seem Old’s toe-tapping tune like a glass slipper, mirroring the fast-clip movements and decisive framing of the short in its entirety.

See a few sequences and watch the full film for yourself, below:

The single, “This Mess Won’t Make Itself,” is out January 30th Vourliotes Recordings / You and Who’s Army Media. Find more music on Dead Seem Old’s Facebook  and Soundcloud pages. Take a look at more animation work from Joseph Blanc on his Vimeo page here.

This Short Will Make You Quit Your Job