Work hard. Work smart. Work hard and smart. Or just be born rich. Whoever you ask, they’re bound to have their own personal theory about how to achieve success, create a thriving business, and become a self-made millionaire.

Broadly speaking, it’s essential to recognize that your success in life is a combination of luck, good timing, your ability to seize opportunities, how you cooperate with others, and whether you’re able to persevere despite failure. Obviously, it’s far easier to take risks when you have a financial safety net to fall back onto. Meanwhile, people who don’t have access to those kinds of resources are walking on a razor’s edge when they decide to become entrepreneurs. However, that doesn’t automatically mean that your efforts can’t lead to success, whatever your financial standing.

Redditor u/Tiredworker27 went viral on the aptly named r/antiwork subreddit after sharing his opinion that rich people don’t work hard or smart. “They just have the money to throw at competent people that do all the work for them,” he claims that the wealthy aren’t self-made and that they “don’t work at all.”

Scroll down to read his full post, as well as how other members of the r/antiwork community reacted to it. The author of the post started up a real discussion with his post. Do you agree with the OP or do you think his perspective lacks some nuance? What do you think it takes to be successful in life, as well as to create self-made generational wealth? Share your thoughts and opinions in the comments, Pandas!

Bored Panda reached out to workplace expert Lynn Taylor for some insights about coming to terms with the fact that others might be wealthier than ourselves, and how to move past envy and resentment. What’s more, she revealed the character traits that lead to success in life. Taylor is the author of ‘Tame Your Terrible Office Tyrant’ and the head of the fashion brand ‘Behind the Buckle.’ She also has a popular blog on Psychology Today.

“It’s often a human instinct to envy those who have more, however people define that. But one could argue that jealousy is one of the most destructive human traits. It’s okay to envy people in a healthy way and learn from their successes. But it’s another to become bitter and destroy your precious hours or days. Time is not a renewable resource,” she told us. You’ll find our full interview with her below.

Some individuals believe that the rich are to be emulated. Others think that they don’t ‘deserve’ their success 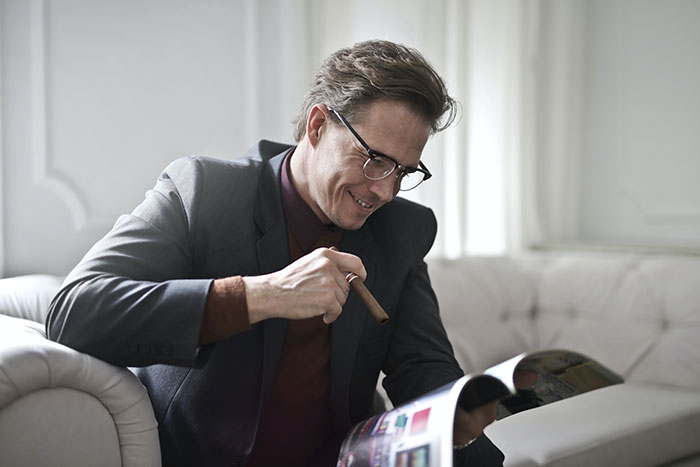 An internet user went on a rant that ended up splitting the readers. Here’s what he had to say about wealthy people 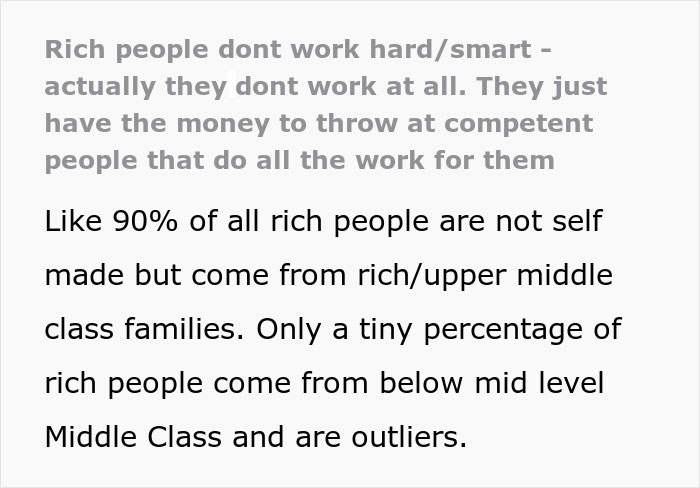 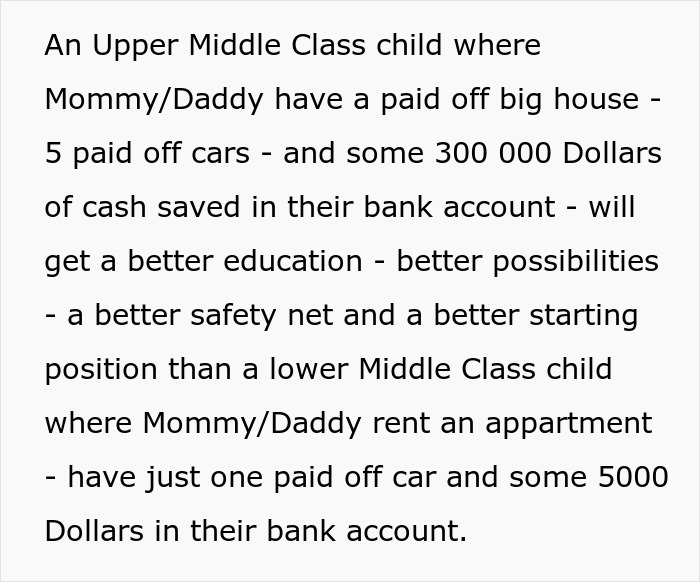 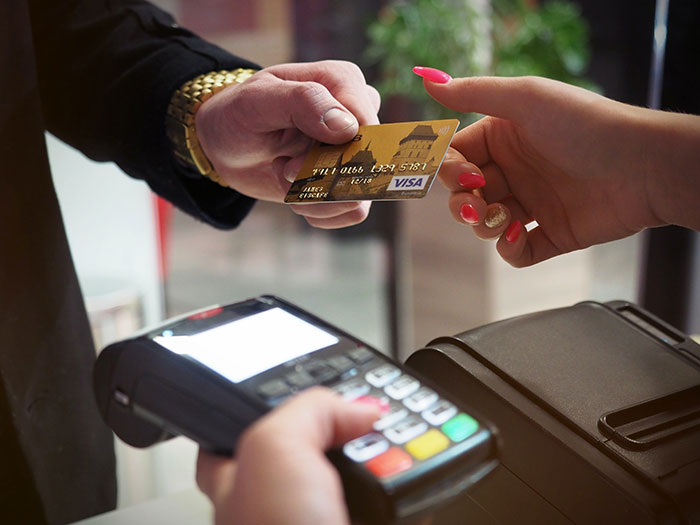 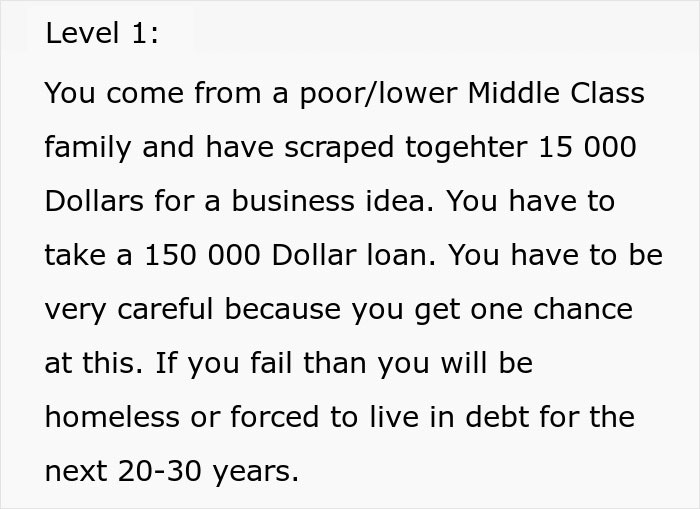 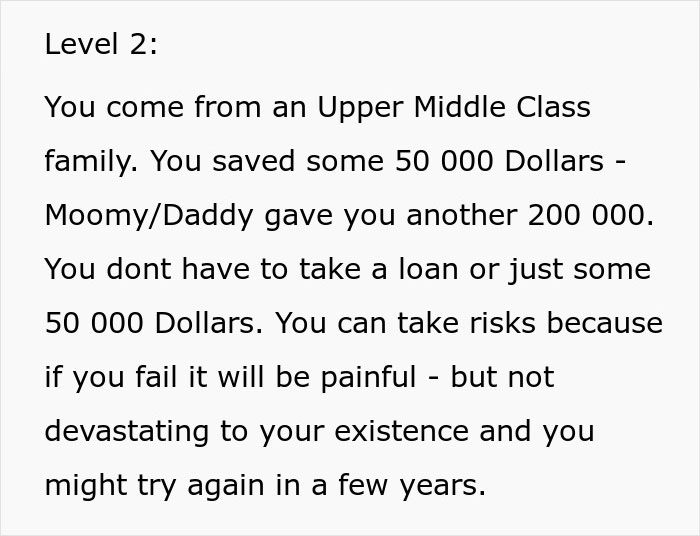 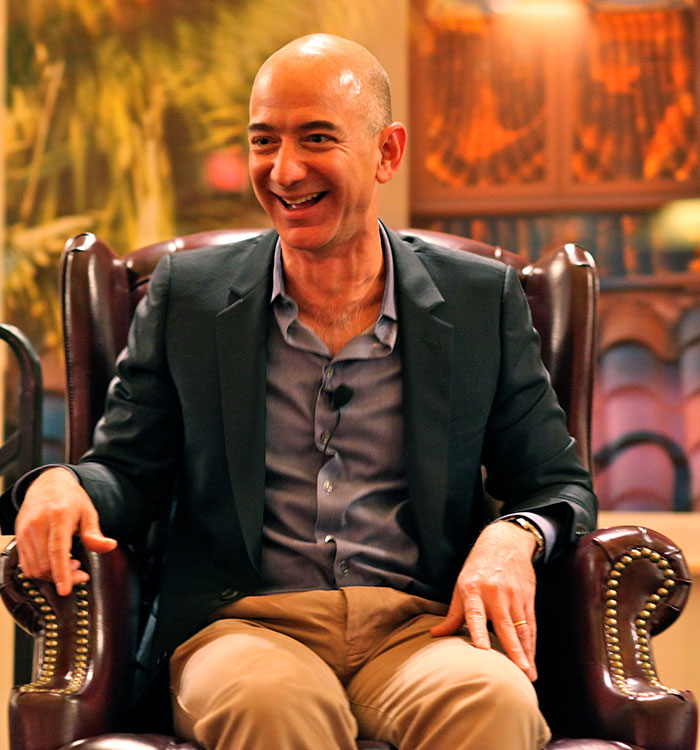 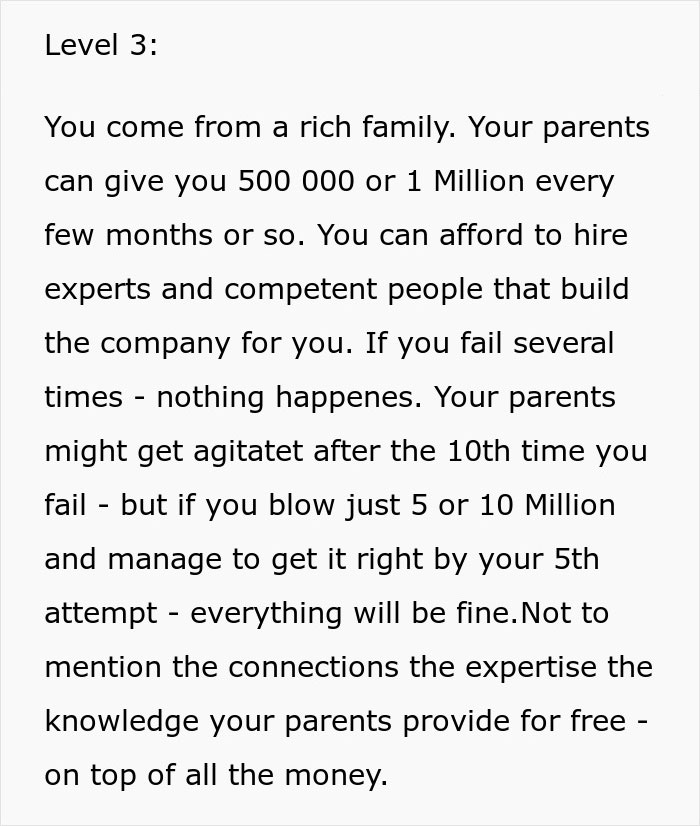 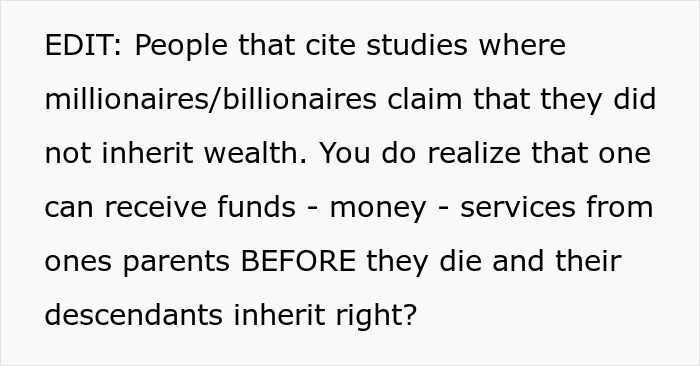 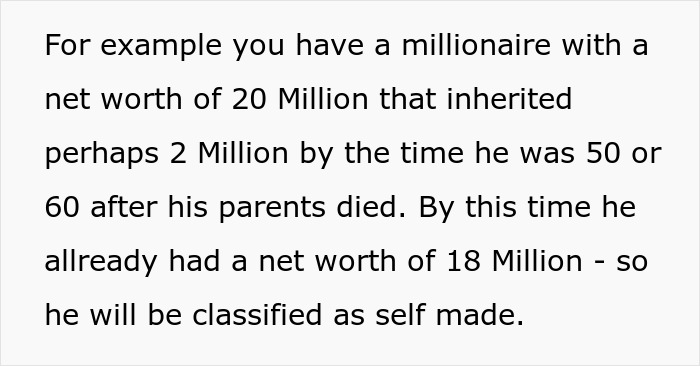 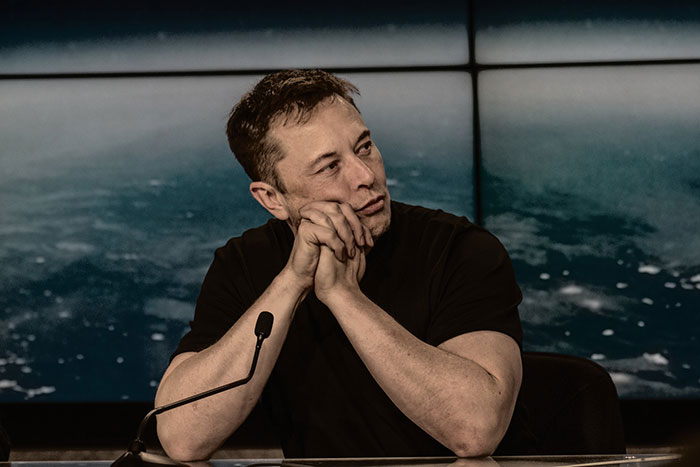 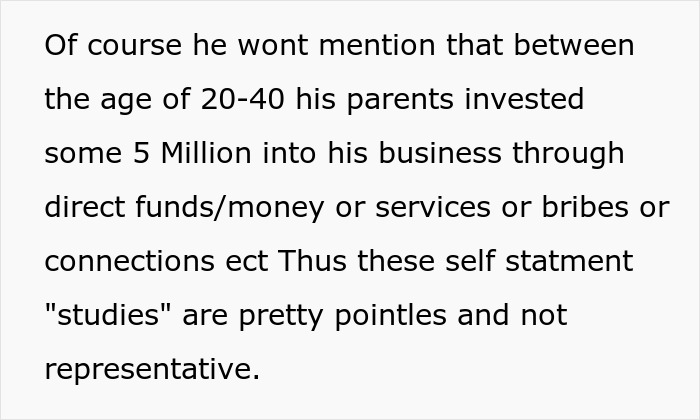 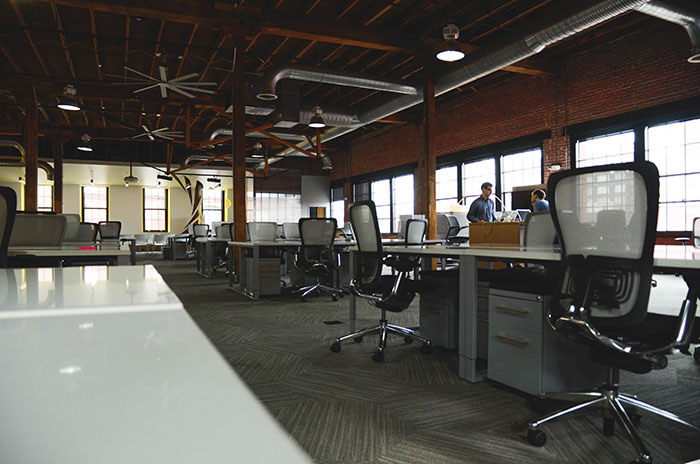 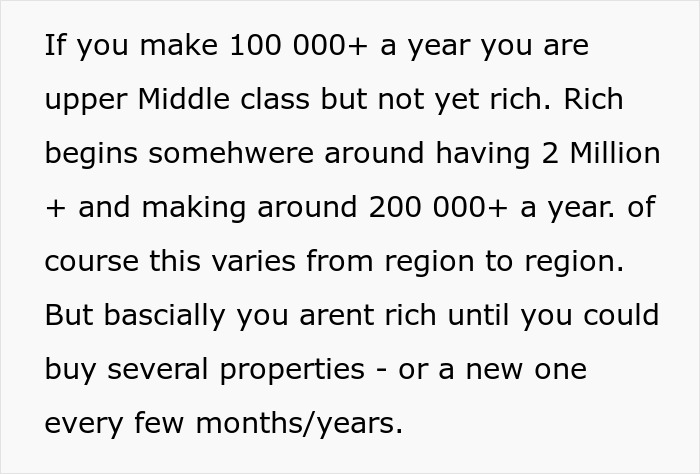 Workplace expert Taylor shared a few tips with Bored Panda on how someone might stop resenting the rich and feeling jealous of what they have all the time.

The workplace expert and the author of ‘Tame Your Terrible Office Tyrant’ noted that people who flaunt their wealth, for example on social media, “are typically compensating for other challenging life issues they are facing.” She added that “the happiest people usually don’t boast.”

Feeling envy or jealousy is natural. However, these feelings shouldn’t take over your life. Taylor was kind enough to share a couple of ‘antidotes’ to jealousy. The first one is having gratitude for what you already have. The second is to find a way for the success of others to inspire you. “We live in a country that offers freedom and opportunity, so let the emotion of jealousy shift to aspiration,” she said.

“Try an experiment and research what makes that person such a success. Are they tenacious? Do they work long weeks? Network with ‘the right people?’ It’s easier to defuse jealousy if you can identify with a person; learn about their trajectory to achievement; and apply that to your own life.”

Meanwhile, the expert shared how someone might move past feelings of resentment and that someone who is rich might not ‘deserve’ their success.

“No one really knows what life is like in the totality of someone else’s world, despite what you might see on Instagram or Facebook. For example, someone who inherits a large sum may come to feel inadequate; like they are unable to make it on their own—or become obsessed about losing what they were gifted,” she told Bored Panda.

“Money and success can be fleeting. This doesn’t mean you should wish poor outcomes on successful people! Financial misfortunes happen every day, and are part of life, so basing all your happiness on it can be a fragile proposition. ‘Prosperity’ can also be defined by having cherished loved ones and good health, for example,” Taylor noted.

“No one is getting out of here alive. So you must decide if you want jealousy to ‘rent space in your head’—or create the best existence possible for yourself. Your focus is your choice and will dictate your own level of fulfillment in life.”

Meanwhile, we were curious to get Taylor’s take on what character traits tend to lead to success in life. “Of course, no two people are alike, but there are some common denominators among successful individuals. Some of these ingredients include: tenacity, confidence, hard work, and risk taking,” the author of ‘Tame Your Terrible Office Tyrant’ said.

Here is the workplace expert’s advice on this:

In redditor u/Tireworker27’s opinion, upward mobility is extremely limited. He also claims that anyone who’s lucky enough to be born into a rich family can throw money at any business idea that they want until they succeed. Moreover, he believes that rich people lie in surveys where they report that they’re actually self-made millionaires and billionaires.

In other words, the OP shared a general sentiment that some rich people may not ‘deserve’ the wealth that they flaunt. He also seems to be under the impression that wealthy families give their children practically unlimited access to their coffers. Meanwhile, the less well-off are left to bear the brunt of risky financial ventures, with barely anything to fall back on, should they fail.

While wealth and recognition are something that many people strive toward, they are far from the only factors that you should consider. That is, if your goal is to be happy. As we’ve covered on Bored Panda recently, being rich isn’t all that it’s cracked up to be. Especially if you win the lottery.

Money tends to correlate with happiness only up to around $100k/year. Earning more than that doesn’t necessarily make you significantly happier, though wealthier countries tend to report higher levels of happiness. Instead, having good health, as well as dependable, loving, kind, and loyal people around you are far more important when it comes to life satisfaction.

One major problem that the rich (and especially lottery winners) have to deal with is that they constantly have people hounding them for cash and favors. Meanwhile, their own family and friends might accost them, asking them for money and to pay for their every whim. This can lead to feelings of resentment, on both sides.

While money certainly does open a lot of doors and allows you to try and try again, it doesn’t necessarily guarantee success and further wealth down the line. Diligence, discipline, perseverance, and the ability to collaborate with others are pretty good predictors of adult success. And it’s essential not to forget this.

We might not be able to control every aspect of life, but working hard and applying our talents in a smart way can bring about the desired results. Is everyone going to succeed? Obviously not. But it would be unfair to assume that the very best qualities that humankind has to offer—grit, hope, self-discipline, and the courage to try—can’t lead to financial stability for us, and our loved ones. 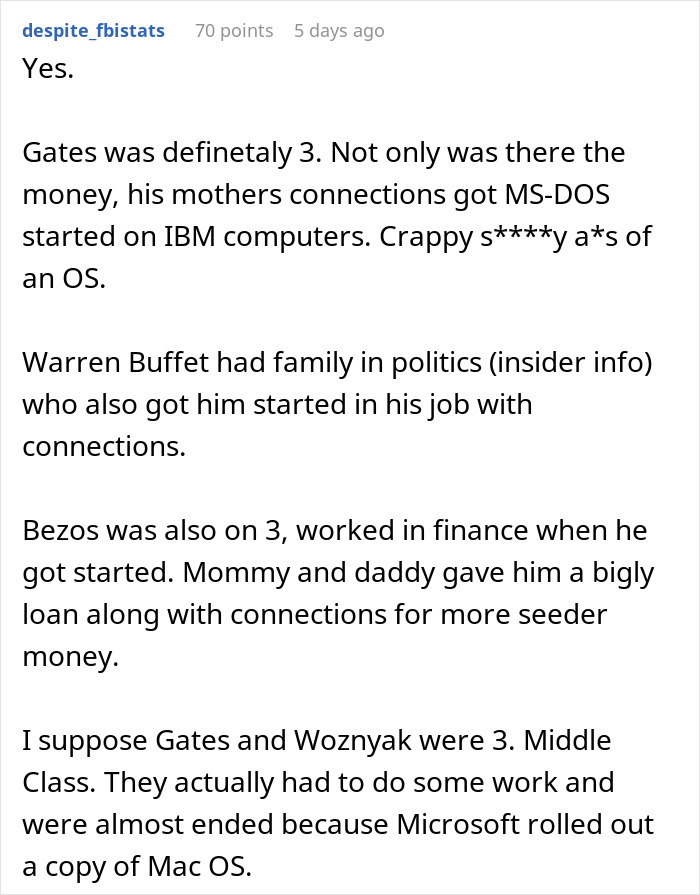 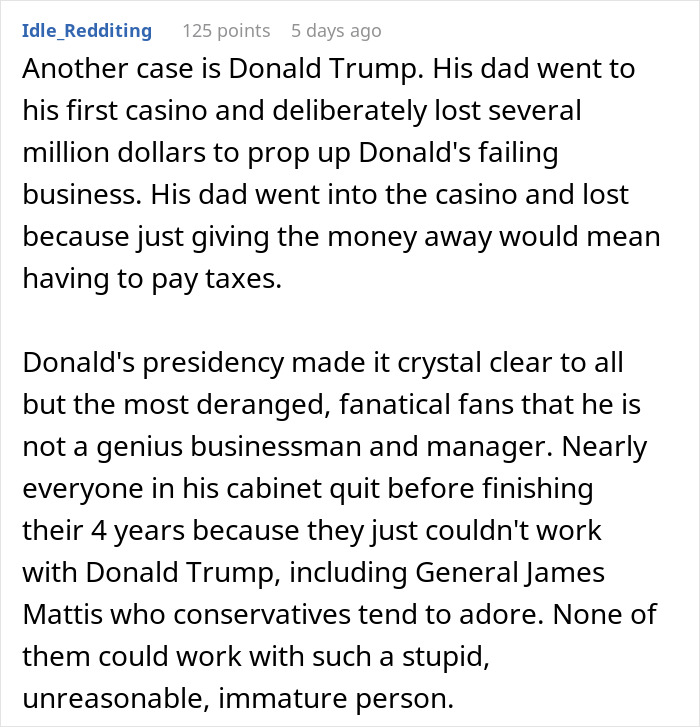 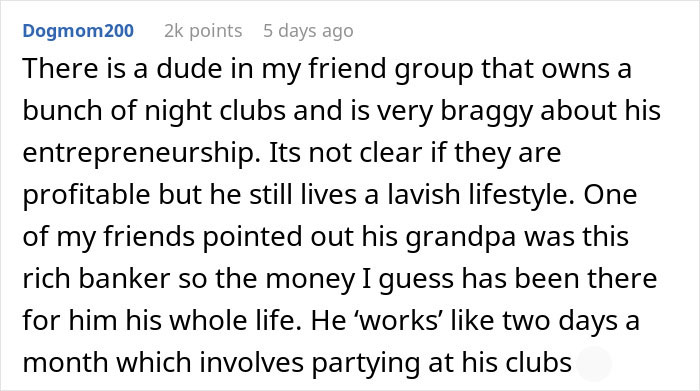 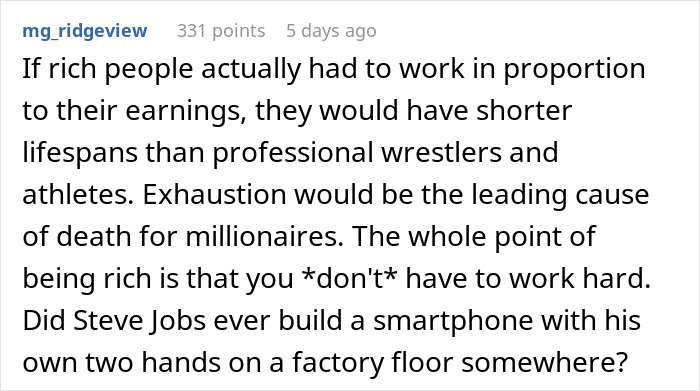 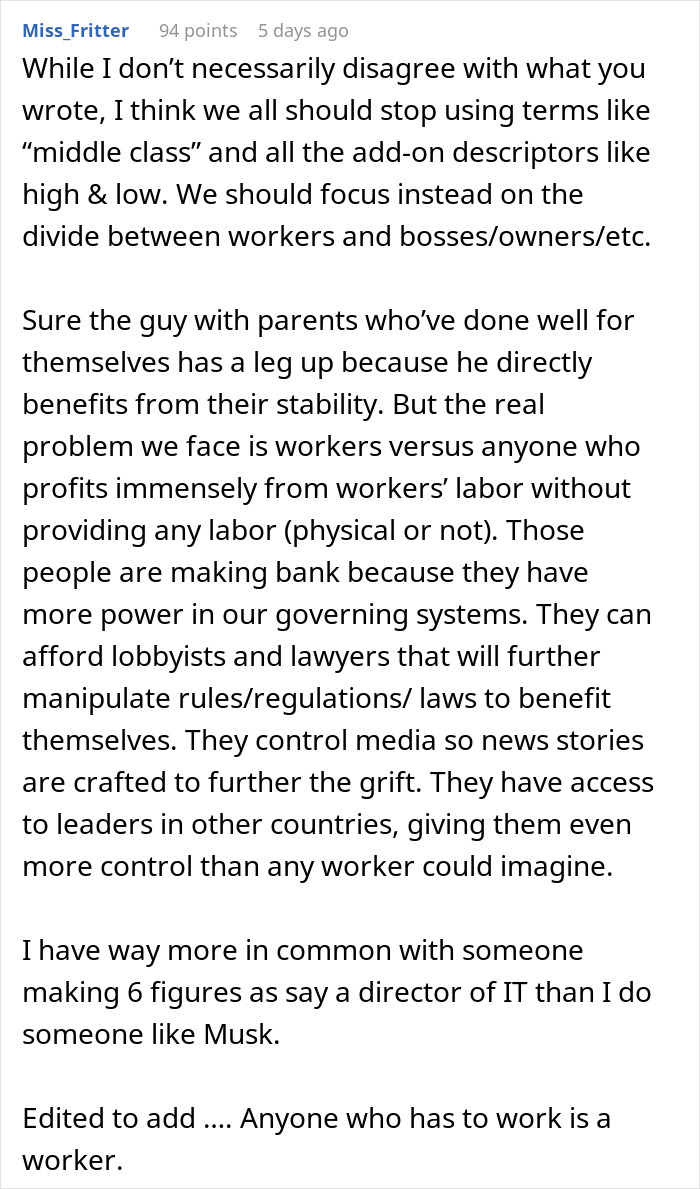 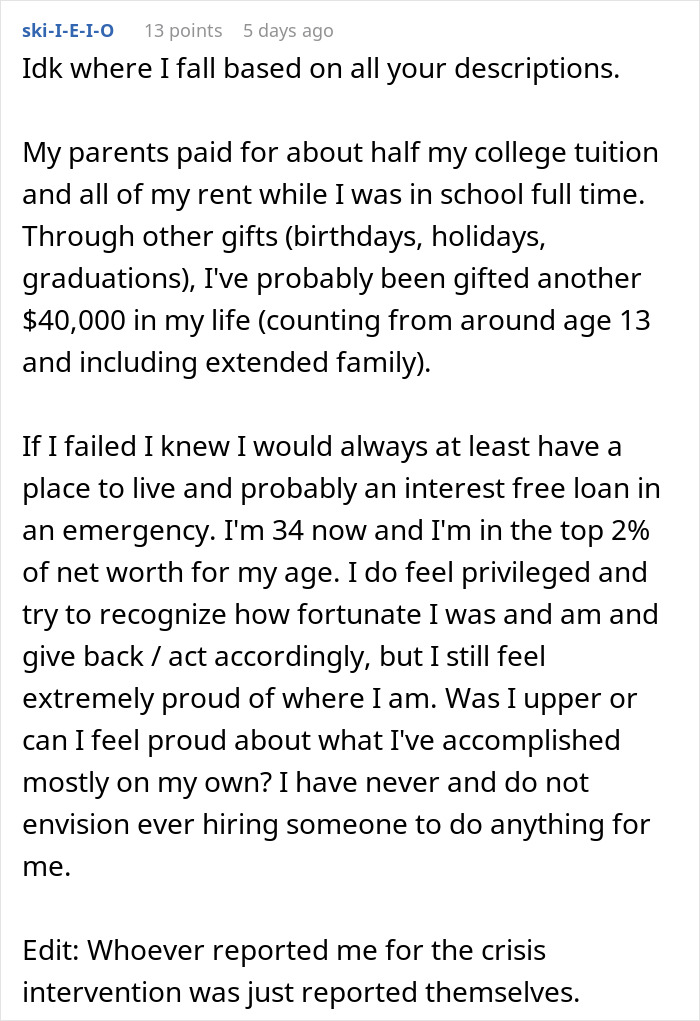 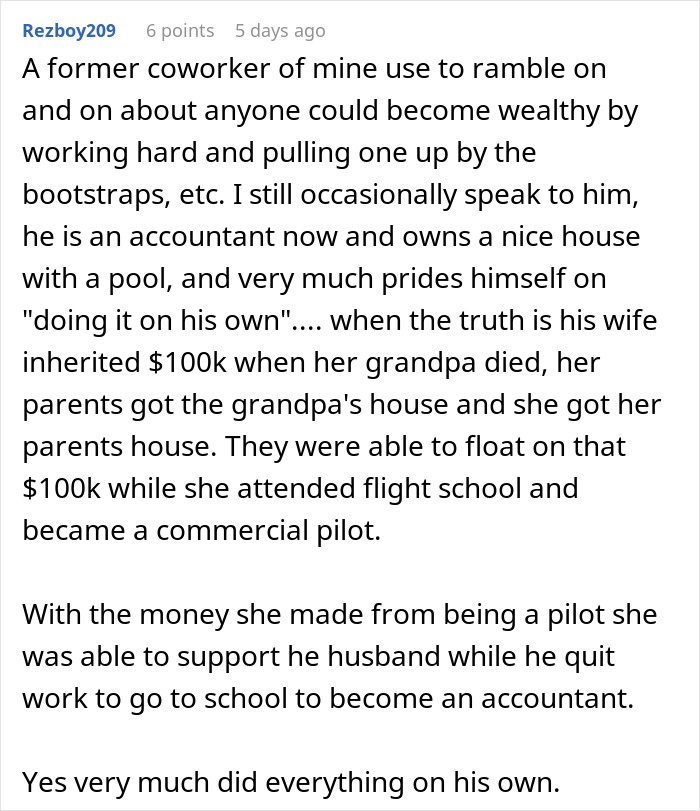 However, not everyone agreed with the original post. Some felt that the author was cherry-picking arguments 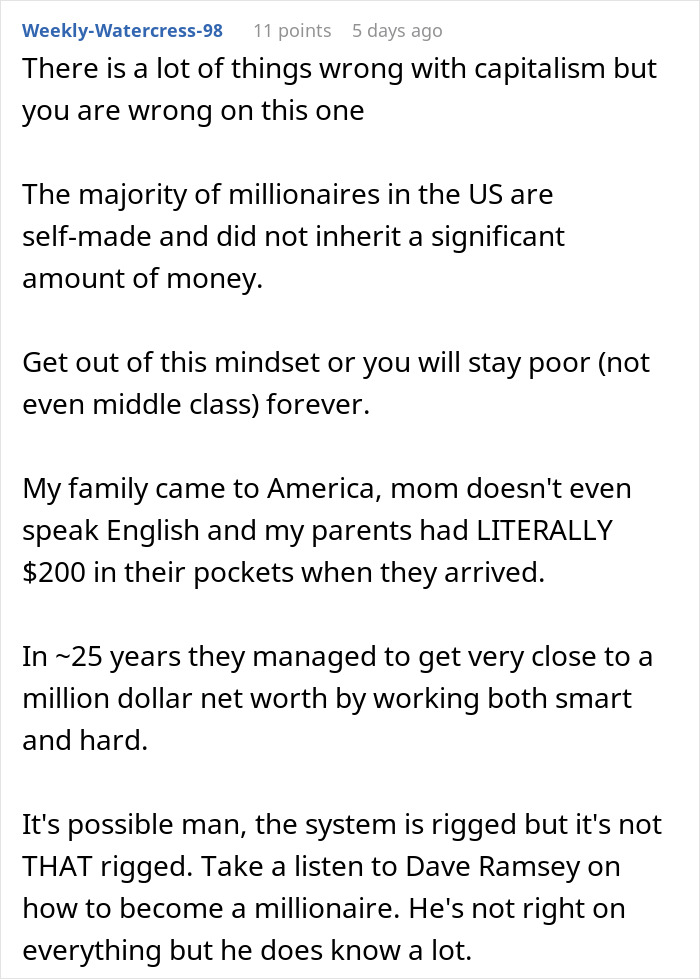 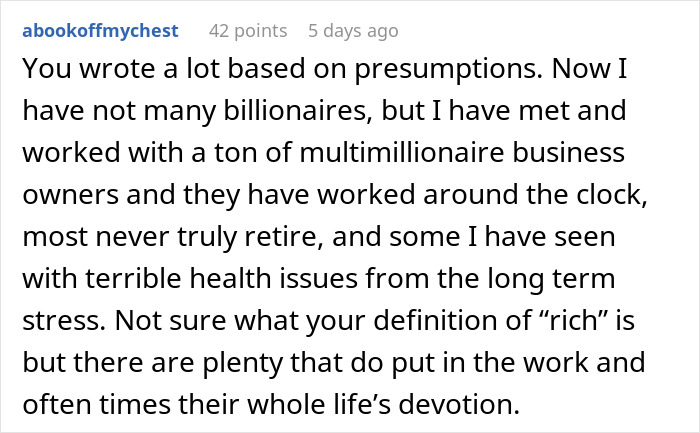 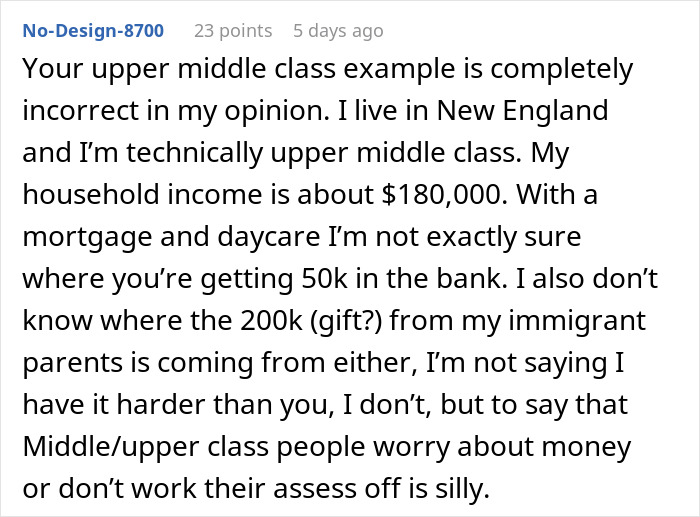 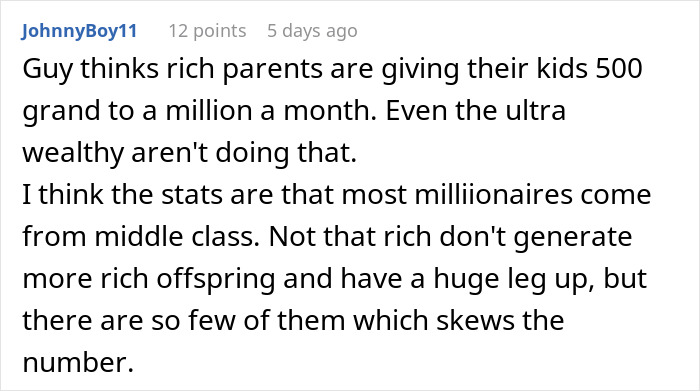 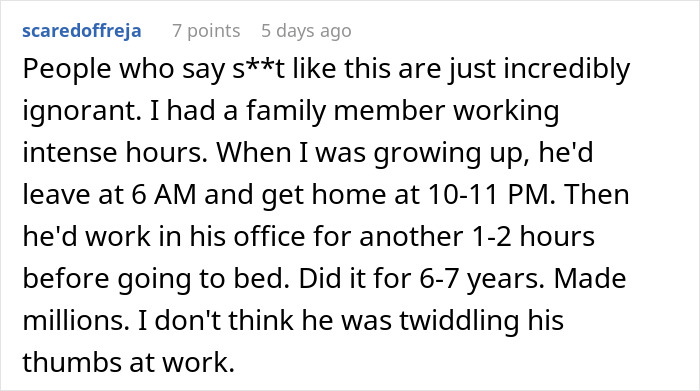 The post Eye-Opening Online Thread Talks About Rich People And The Idea That They’re “Self-Made” first appeared on Bored Panda.