The following is an article from The Annals of Improbable Research, now in all-pdf form. Get a subscription now for only $25 a year!

Some researchers are trying to see whether reality smiles on the idea that (a) smiling causes happiness, and (b) frowning induces unhappiness. Here are some prominent attempts.

The facial feedback hypothesis suggests that muscular manipulations which result in more positive facial expressions may lead to more positive emotional states in affected individuals. In this essay, we hypothesize that the injection of botulinum toxin for upper face dynamic creases might induce positive emotional states by reducing the ability to frown and create other negative facial expressions. The use of botulinum toxin to pharmacologically alter upper face muscular expressiveness may curtail the appearance of negative emotions, most notably anger, but also fear and sadness…. 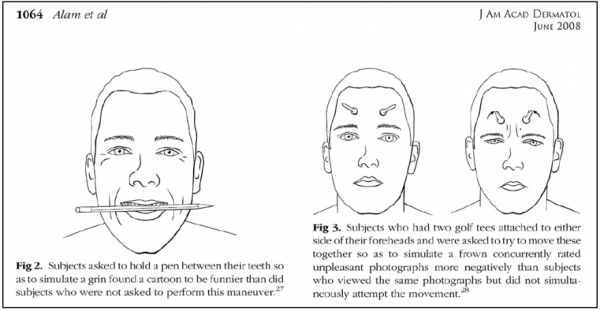 Detail from the study “Botulinum Toxin and the Facial Feedback Hypothesis: Can Looking Better Make You Feel Happier?”

Alam, Barrett, Hodapp, and Arndt weigh the ups and downs of facial features and of emotions:

On balance, the evidence suggests that botulinum toxin injections for upper face dynamic creases may reduce negative facial expressions more than they reduce positive facial expressions. Based on the facial feedback hypothesis, this net change in facial expression may potentially have the secondary effect of reducing the internal experience of negative emotions, thus making patients feel less angry, sad, and fearful. 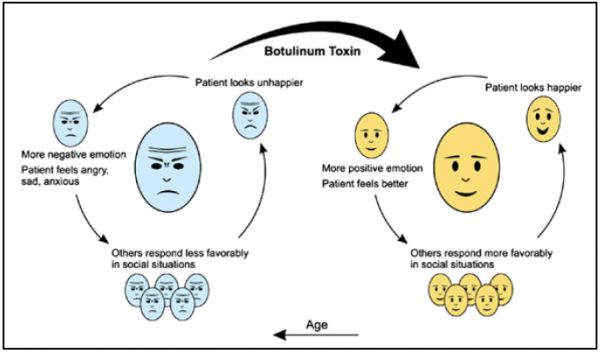 Further detail from the study “Botulinum Toxin and the Facial Feedback Hypothesis: Can Looking Better Make You Feel Happier?”

2009: The Rubber-Band Cheek-Lifting Experiment
“Another Test of the Passive Facial Feedback Hypothesis: When Your Face Smiles, You Feel Happy,” Kazuo Mori and Hideko Mori, Perceptual and Motor Skills, vol. 109, no. 1, August 2009, pp. 76-78. The authors, at Tokyo University of Agriculture and Technology and Bunka Women’s University, Japan, explain:

88 undergraduates (44 men, 44 women) participated in an experiment to examine whether the cutaneous sensation of having the cheeks lifted would cause a feeling of happiness. Two types of paired adhesive bandages connected with rubber bands were prepared and used either to raise or lower the cheeks. While the bandages were applied, the participants rated their feelings.

The results showed that 50 participants felt happiness when their cheeks were lifted, statistically significant compared to the 27 who felt sadness. They confirmed the hypothesis that people may feel happy when their cheeks are lifted upward. 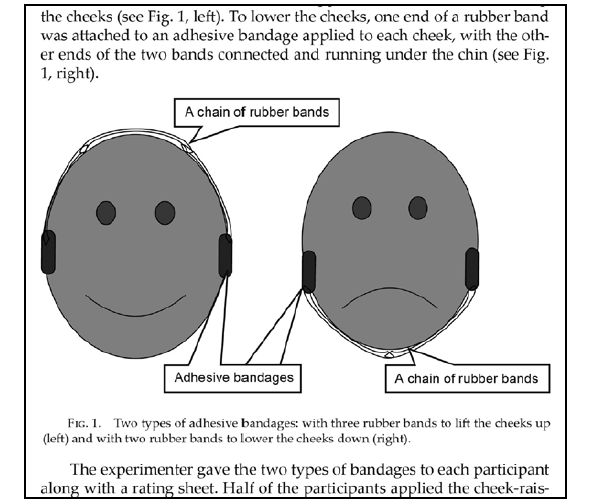 Detail from the study “Another Test of the Passive Facial Feedback Hypothesis: When Your Face Smiles, You Feel Happy.”

We tested whether aggressiveness can be triggered by the involuntary frowning that occurs when people face the sun, due to the fact that suninduced frowning involves the same pattern of facial muscle activation as in the expression of anger (interestingly, Charles Darwin remarked on the sunshade-like nature of frowning). In line with data showing that experimentally and unobtrusively induced facial and body displays facilitate congruent feelings, we found that participants walking against the sun without sunglasses scored higher in a self-report measure of anger and aggression compared to those walking with the sun behind and/or wearing sunglasses. We also suggest that frowning at the sun affects mood very quickly, because we did not find any effect of walking time on self-reported aggressiveness. Our results provide the first evidence of the ecological validity of the facial feedback hypothesis. 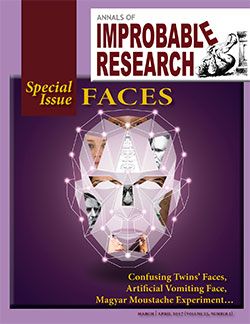 The article above is republished with permission from the March-April 2017 issue of the Annals of Improbable Research. You can download or purchase back issues of the magazine, or subscribe to receive future issues. Or get a subscription for someone as a gift!

Visit their website for more research that makes people LAUGH and then THINK.