While more and more Americans are opting for the childfree lifestyle for various reasons, the pressure to have kids is still enormous. No wonder so many couples feel constant stress from the inconsiderate and nosy family members and friends who never miss a chance to ask that one annoying question.

“Friends and family are causing us constant stress about having a baby soon but it’s obviously something we can’t control. We only wished that they’d stop but to no avail,” the woman who’s been married for 6 years wrote in this recent post on r/AITA.

So she came up with an unusual idea – the “Pregnancy Jar.” The author said she carries it with her in her bag whenever she’s with friends and family. “Every time someone asks about when my husband and I are gonna have a baby, I pull my Jar out and ask them to drop a dollar in there for asking.” Puzzled looks follow, but the author said it actually works.

But just last week, family drama over the “Pregnancy Jar” blew up after the author’s brother asked you-know-what. Read below to find out how the drama evolved, and be sure to share your thoughts in the comments.

Recently, a woman asked if she didn’t go too far with her “Pregnancy Jar” that she uses to take a dollar from anyone who asks when she’s having kids 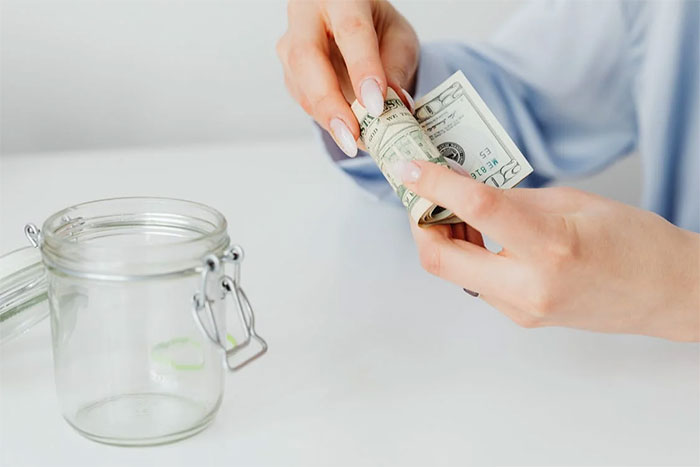 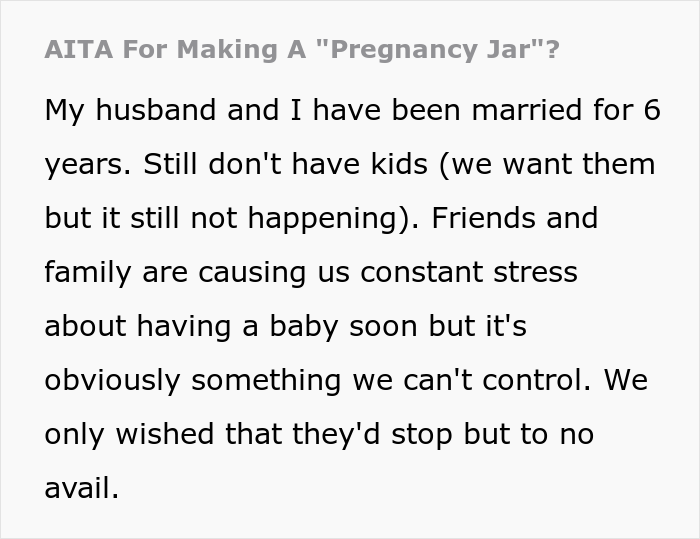 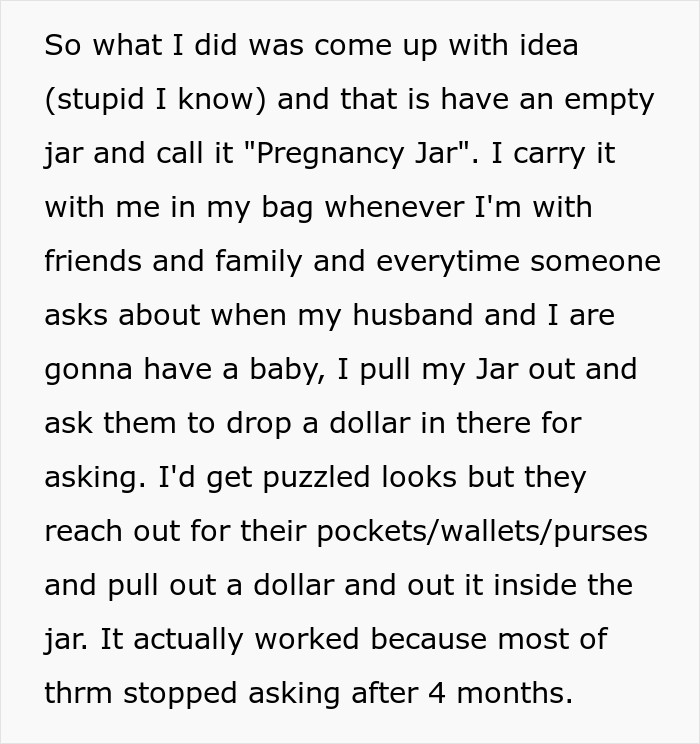 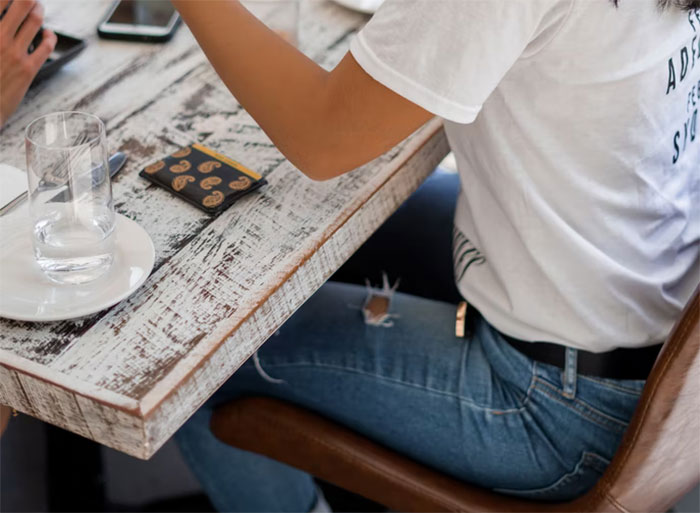 “When are you having a baby?” is the kind of question many women would do anything not to hear ever again. Yet, many of us have experienced it multiple times. So in order to find out how to handle this annoying question, we spoke with Susan Petang, a certified divorce coach and the creator of “The Quiet Zone Coaching,” who teaches people how to stop feeling overwhelmed and start waking up happy in the morning again.

“It can be super annoying when others (family or not!) continually ask when you’re going to have kids, get married, or something else that they think you should be doing,” Susan said and added that “no, it’s none of their business.” Having said that, the life coach thinks the “jar” idea is “IMHO, a little jerky, and provokes arguments and bad feelings.” She explained: “How would you feel if you asked someone a question – thinking that it’s perfectly innocent – and they whip out a jar, demanding a dollar?”

Susan argues that “trying to understand WHY someone is doing something annoying doesn’t justify their behavior, but putting yourself in someone else’s shoes for a moment helps YOU be less annoyed.” She added: “you can even think to yourself, ‘Wow, it’s really sad that they don’t understand how annoying that question is.’”

Susan also reminds everyone to remember that other people are going to do what they are going to do. “We have no control over their behavior. You’re right, your Nosy Aunt Rosie shouldn’t be asking you these questions – but she just did.” The life coach argues that “our expectations of others aren’t going to change the weather on Jupiter, so don’t get all bristly when people ask stupid or nosy questions – we can’t control them, but we can control ourselves, and our responses.” 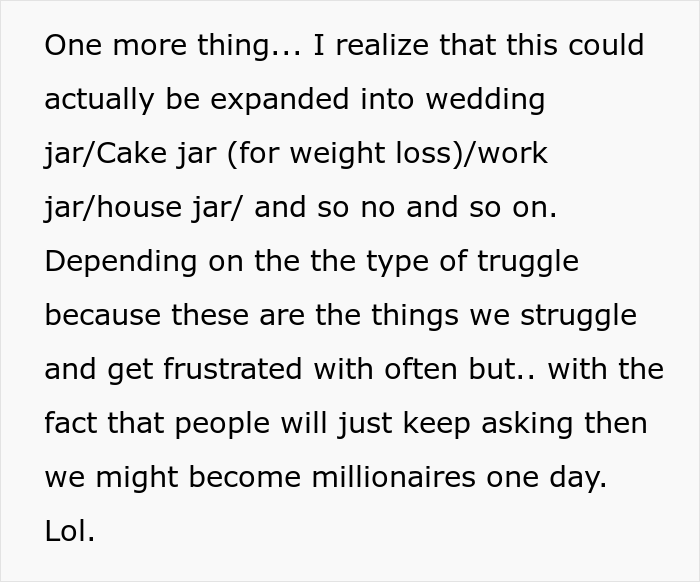 If you ever receive this annoying question, Susan argues, a kinder thing to do is shut them down gently. “Address the intention rather than the question. For example, the woman in the story could say to her brother, ‘That’s something I love about you – you’re so concerned about my happiness!’ (Note that she hasn’t answered the nosy question.)”

Susan added: “Another great response would be, ‘You seem like you really want us to have a baby!’ Then let him explain his question. You can also come right out and ask, ‘Why do you want to know?’”
Susan reminds readers to make sure your responses come from a place of love instead of being snarky, jerky, or hostile. “It’s a better way to keep the peace and be a kind human being. (I hope she doesn’t get a kick out of being a jerk!)” 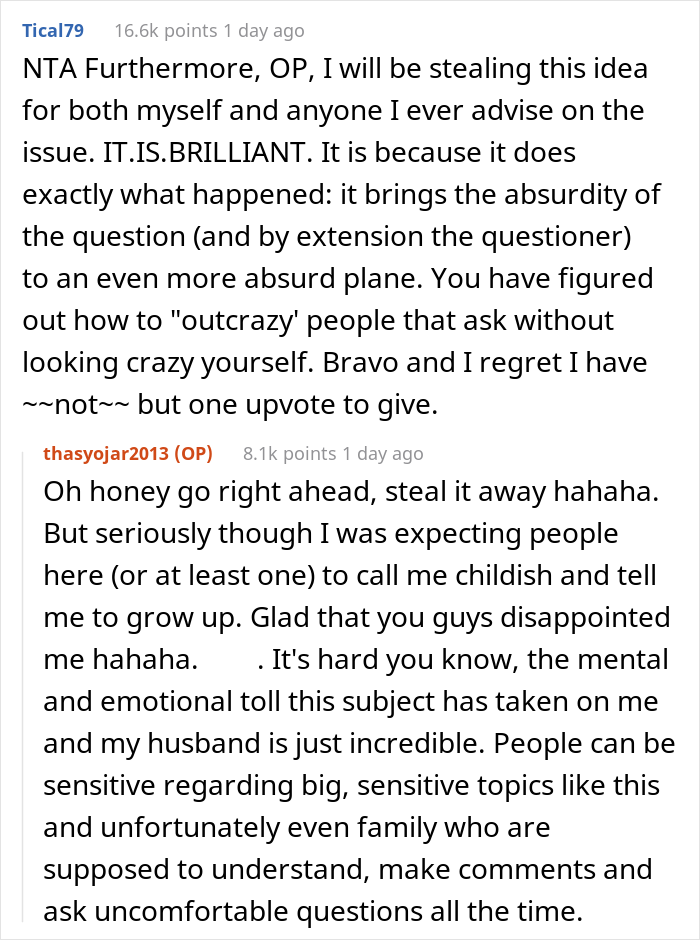 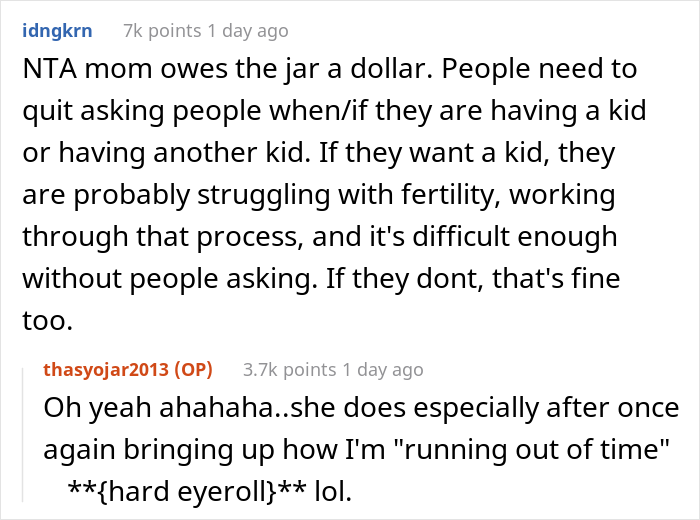 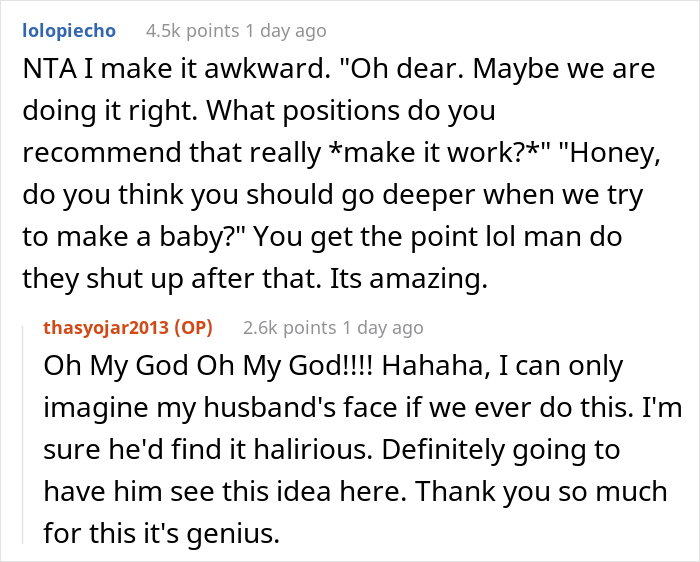 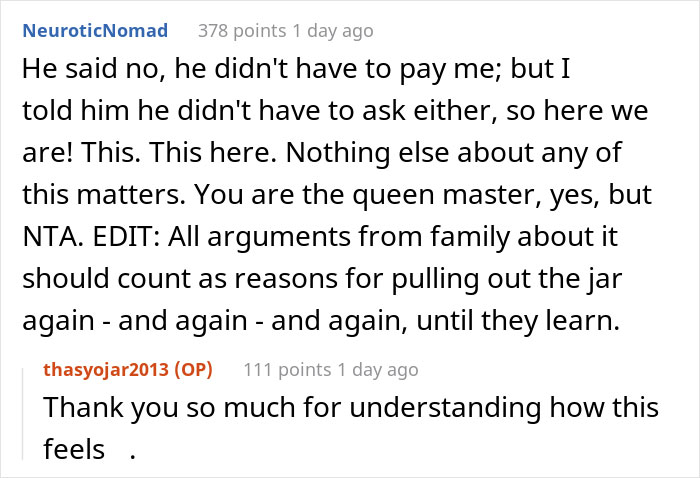 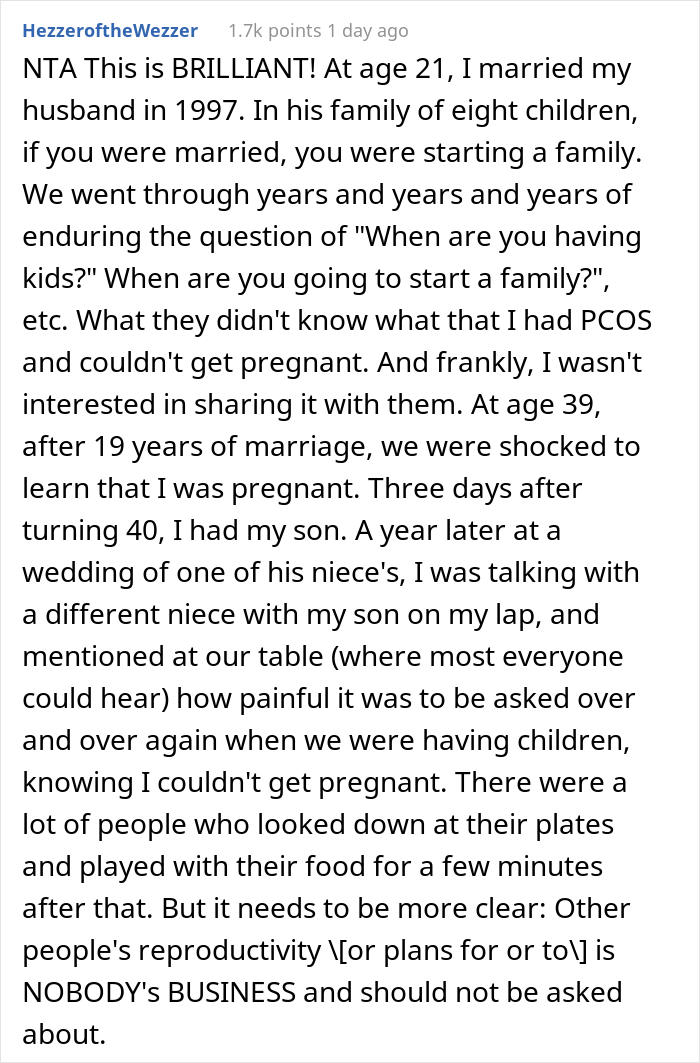 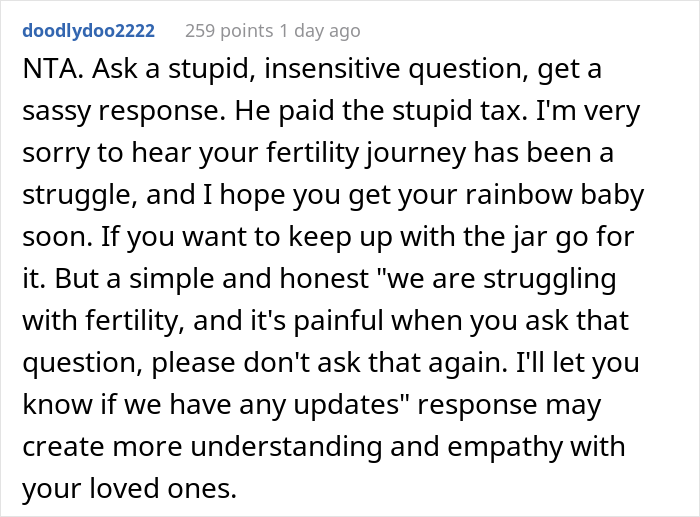 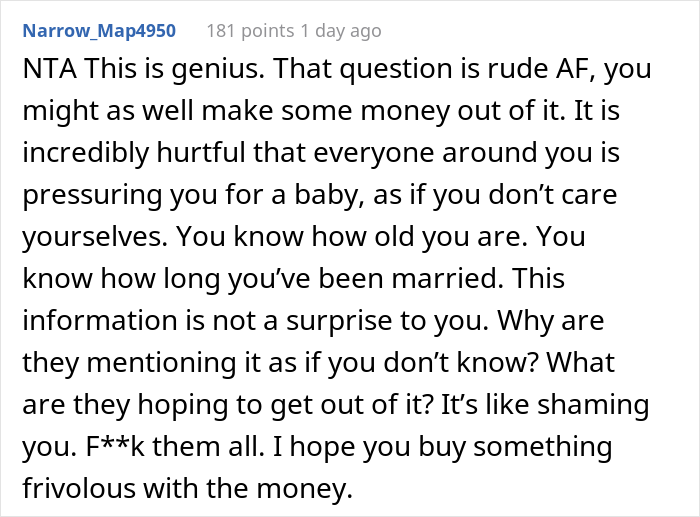 But what happens if the other person keeps pressing, and won’t let the question go?
Susan argues that there are two ways of shutting that down. “The first is to agree with them: ‘You’re right, we should really get right on that! Thanks for the reminder!’ or, ‘You’re right, now you’ve given us something to think about. Thanks for your concern!’ If you agree with them, there’s nothing to argue with.”

“The second is to set a limit using the XYZ formula: ‘When you do X, I feel Y, and I’d like Z.’ This should be your last resort, after you’ve tried being kind and they still won’t stop asking.”
Whichever way of shutting them down you choose, remember that tone is everything. “This could be a super hostile way to deal with someone, too, depending on how you say it – so make sure you’re being as kind as possible until the other person is being nasty or hostile,” Susan explained. “An example would be, ‘When you ask us about having children, it makes me sad and angry because it just hasn’t happened for us yet. I’d like to change the subject,’ or, ‘It sounds like you’re really interested in something that, to us, is very personal. I feel upset when you ask about it, so let’s talk about something else.’”

But there were also people who questioned the author’s method 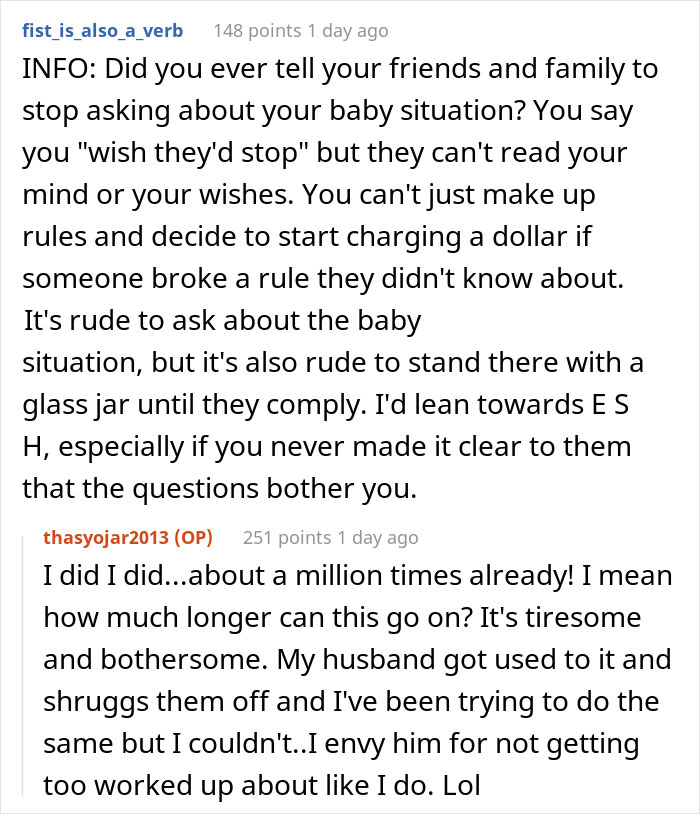 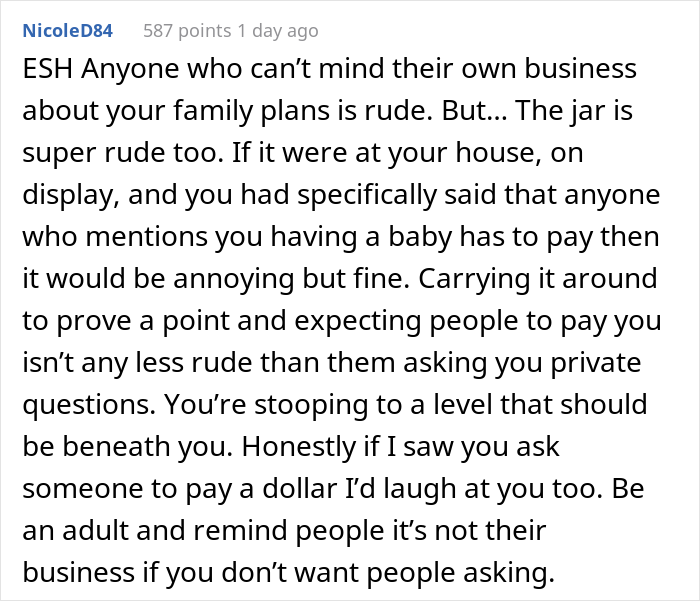 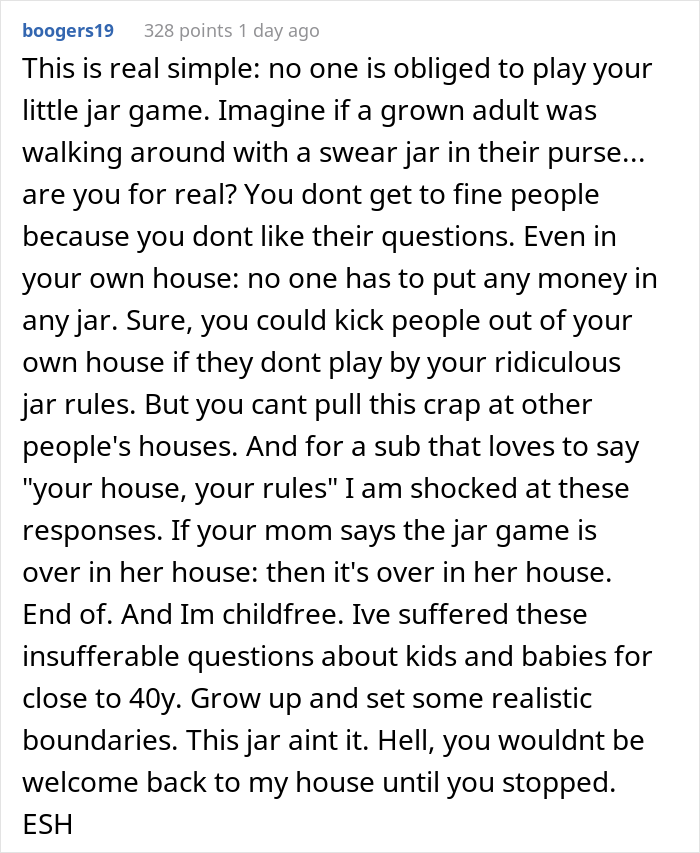 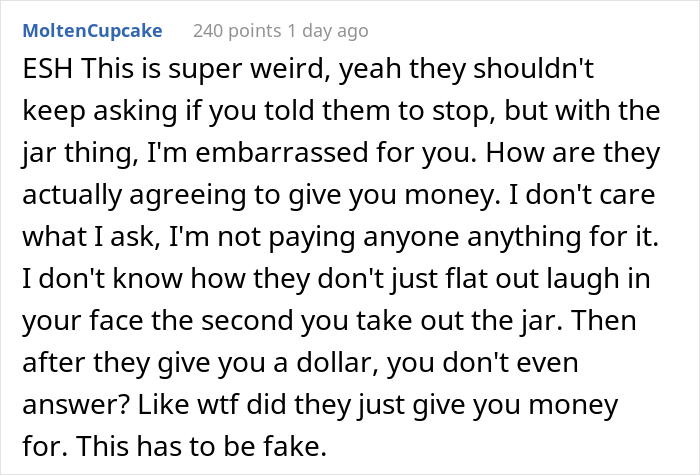 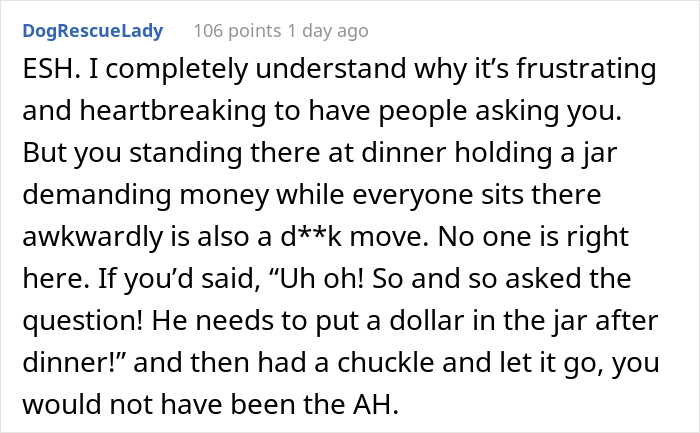 The post Family Calls This Woman A Jerk For Asking Them For A Dollar Every Time They Mention Her Not Having Kids first appeared on Bored Panda.