Being an influencer, a YouTuber, or any other type of cewebrity, while romantic and glamorous, still comes with many challenges, one of which is being under a magnifying glass all the time. And it feels even more so if you’re an entire family, and not an individual, that’s in the spotlight.

One such Kentucky family has recently come under very aggressive fire by people online and offline alike for taking their 6-year-old kid to run a full-fledged, 26.2-mile (42.2-kilometer) marathon together with the entire family of 8, and sharing the journey online.

Meet the Crawfords, a.k.a. Fight For Together, a family spreading good health and togetherness, who have recently finished a marathon and come under fire for it 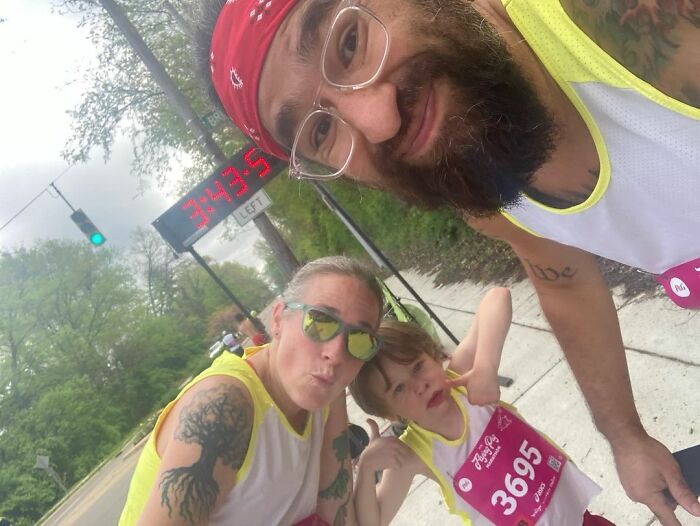 Meet the Crawfords, better known online as Fight For Together, a family of 8 who create videos, record podcasts, take pictures and write books with an emphasis on prioritizing relationships. The family is headed by parents Kami and Ben, with 6 kids in tow: Dove, Eden Hope, Seven, Memory, Felia, and Ranier.

The family is known for taking on great physical challenges, namely becoming the largest family to date to hike the Appalachian Trail, and currently having completed 39 marathons. But it is the most recent marathon that has sparked quite a bit of backlash.

People had a huge problem with 6-year-old Ranier running the 26.2-mile-long marathon, leading to reports of the kid being dragged by the parents about halfway through the run 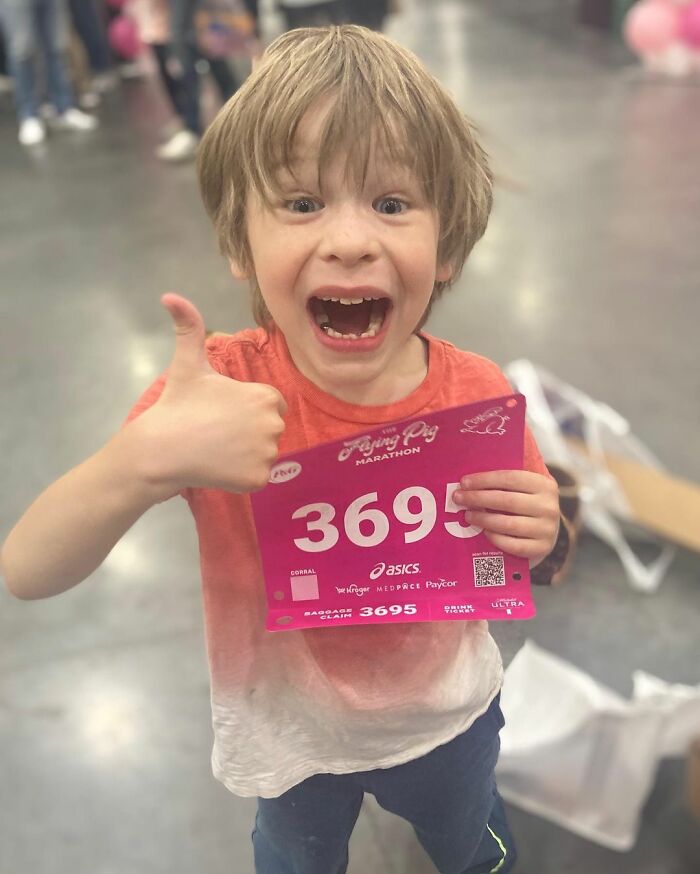 You see, the family of 8 took on the Flying Pig Marathon in Cincinnati, Ohio, which is a 26.2-mile (42.2-kilometer) run that raises money for various charities. And all seems fine and dandy until you consider that the youngest member of the family, 6-year-old Ranier, also took part in it—a feat impressive in and of itself, and even more so for a child, but many online considered it overkill for someone that age.

What fueled the issue even more was an Instagram post explaining the struggle that Ranier had to go through to complete the 26-mile trek, namely that the kid was struggling physically and wanted to take frequent breaks (every 3 minutes) due to the exhaustion.

It got so out of hand that 7 people submitted complaints to Child Protective Services, who soon came over for an investigation 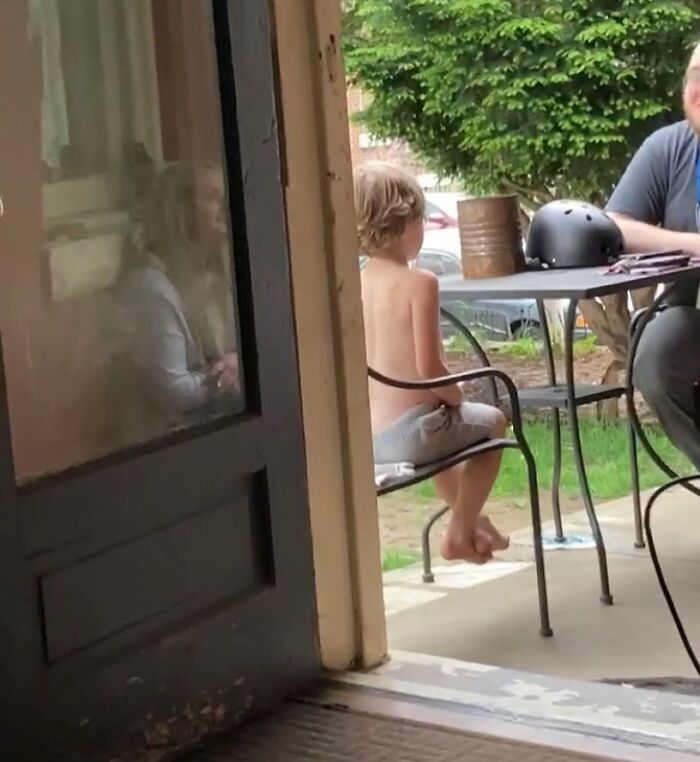 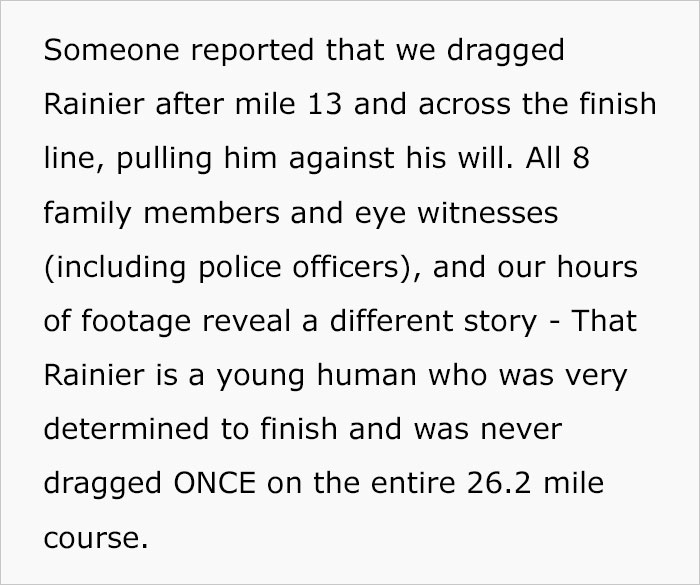 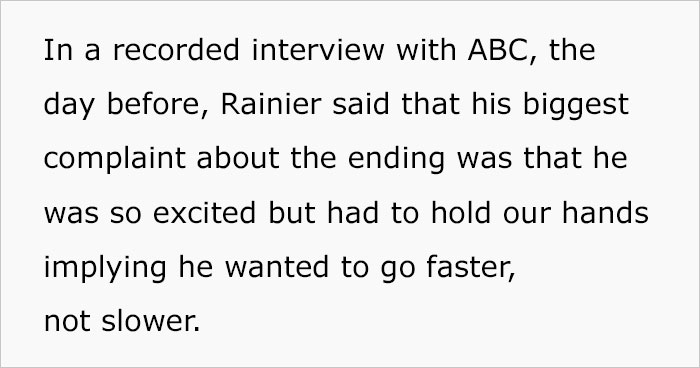 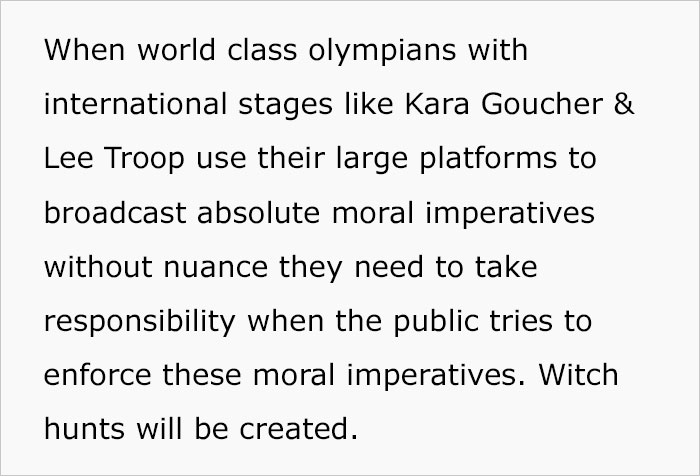 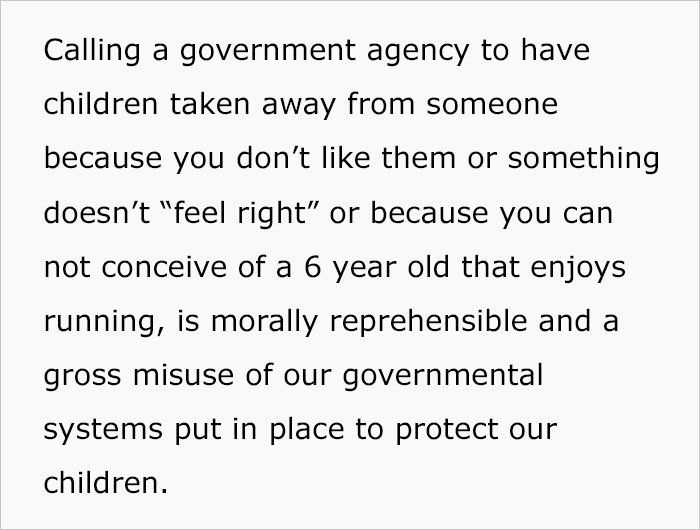 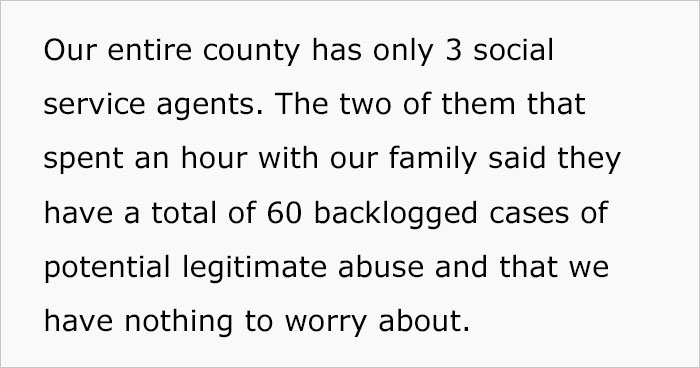 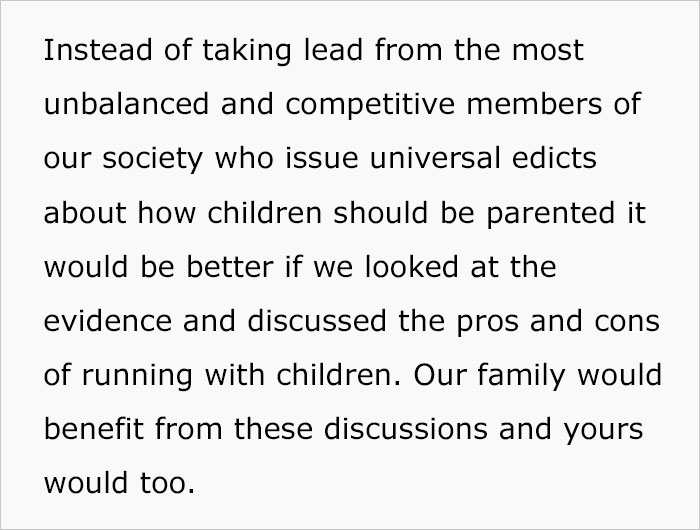 And while they successfully finished the marathon without any incidents, many were very upset that all of this was allowed and a thing in the first place. Besides many coming out against this, 2-time Olympian Kara Goucher and 3-time Olympic Marathoner Lee Troop have tweeted their disapproval. 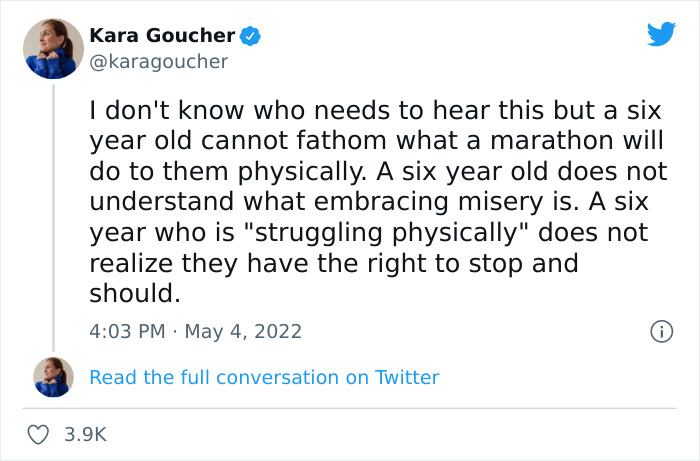 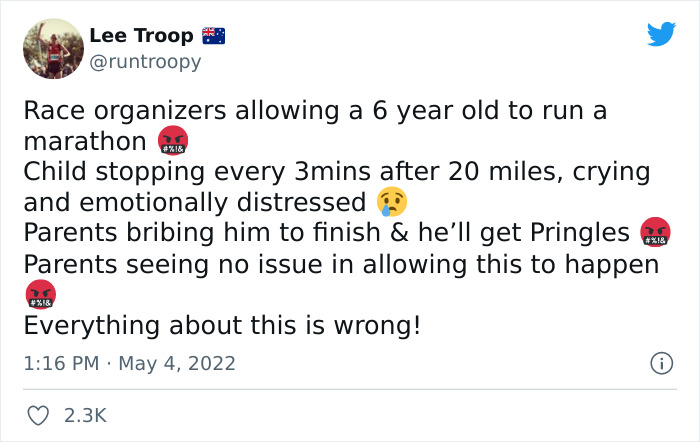 Goucher said a 6-year-old cannot possibly fathom how physically intense a full-blown marathon is to such a young being, not understanding the bodily misery he would need to embrace along the way, and not realizing not only his right to stop, but that he should do so.

Lee Troop also added that this is wrong on multiple levels, pointing out that Ranier shouldn’t have been allowed in the marathon in general, and noting that the parents were effectively bribing him with Pringles.

The backlash got so out of hand that it ultimately led to Child Protective Services (CPS) getting involved, and the parents releasing a 24-minute video on their Instagram explaining the situation.

CPS came over unannounced and held a fairly extensive interview with the family: the kids, the parents, and even the grandmother.

According to the Crawfords, there has to be a specific action, location, and time reported for the CPS to even start an investigation, and as it turns out, there were 7 reports (6 of which were unsubstantiated) claiming that the parents had started dragging the kid after around mile 13 all the way through the end of the marathon, so nearly for half of it. The claim also stated that the kid was crying extensively.

However, in their explanatory video, the Crawfords themselves have said that they have hours of footage and multiple witnesses that can testify otherwise. Moreover, they also explained that while there is nothing official just yet, “there is a wink-wink, nod-nod, you guys aren’t the types of people we’re looking for” situation, so they are likely to be in the clear.

A post shared by Kami and Ben Crawford (@fightfortogether)

In context, while it is not recommended for kids that young to partake in full marathons, especially since most kids need extensive training and there are risks involved, it is still deemed technically safe for kids under the age of 9 to run extensive distances, as long as people take appropriate measures.

This whole issue sparked quite a bit of discussion and debate online, with one side claiming that this is child abuse and no 6-year-old should be put through a physical experience that some adults sometimes can’t even withstand, with folks getting behind the two aforementioned athletes that opposed this.

However, there were fans of the family as well as regular netizens who defended the family. Folks have pointed out that this is a family that takes everything into consideration, prepares thoroughly, and makes sure everyone’s health is in line, and there is their entire online history to back this up.

Internauts were torn on this matter, with some pointing out that having a kid run 26 miles is child abuse, among other things

Many have also expressed how proud they are of the family for keeping haters at bay, considering them heroes because of how much they care for their children’s well being through exercise and staying strong together through difficult times.

It is important to note that one of the Crawfords’ kids, Memory (15), has posted an open letter to Kara Goucher giving context to the issue, pointing out that her words were taken and used against the entire family in hurtful ways, and that her younger siblings have the right to run just like anyone else.

However, there were fans and other internauts who defended the family and expressed their support 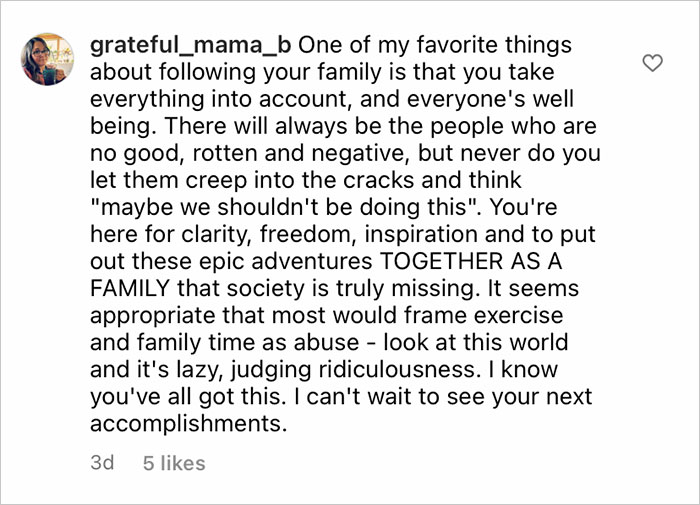 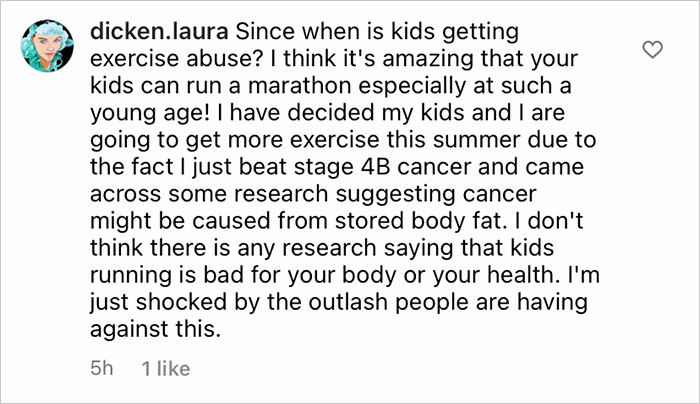 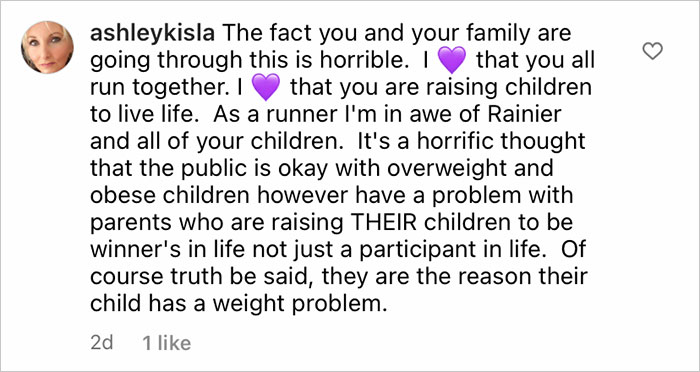 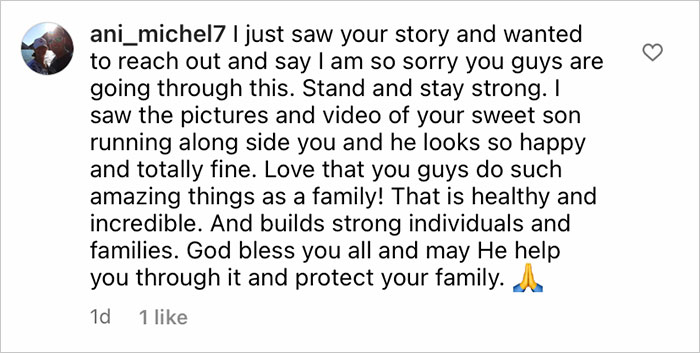 The family provides frequent updates on the matter, as well as posts regular content if you’re into all things togetherness, health, and family, on Instagram and YouTube.

The issue is surely multi-sided, but we’d love to hear your thoughts and opinions on this in the comment section below!

The post Family Of 6-Year-Old Who Ran A 26-Mile Marathon With Them Was Visited By Child Protective Services, Speaks Out About It first appeared on Bored Panda.