There are various reasons why we scroll through social media platforms such as Instagram, TikTok, and Facebook, giving them hours of time per day. But I believe that all those reasons can be summarized in 3 words: relatable, useful, entertaining. It’s become a means of escape and a way to connect with people with similar interests. Especially when it comes to cats. There is nothing better than a squishy, fluffy, murder-mitten possessing kitty, especially when it’s judging you and your life better than any angel at the gates of Heaven will.

It is difficult to find a person who’s not heard of Stepan The Cat before, but even if you didn’t know the 13-year-old’s name, you surely have seen videos of him floating around. Sadly, the famous kitty and his parents had recently found themselves in the middle of war. The Ukrainians went silent for a few weeks, concerning fans, but they’ve come back with some reassuring news. Let’s get into the story!

Stepan the Cat has been entertaining people since 2020, but the war in Ukraine endangered his and his cat mom’s lives 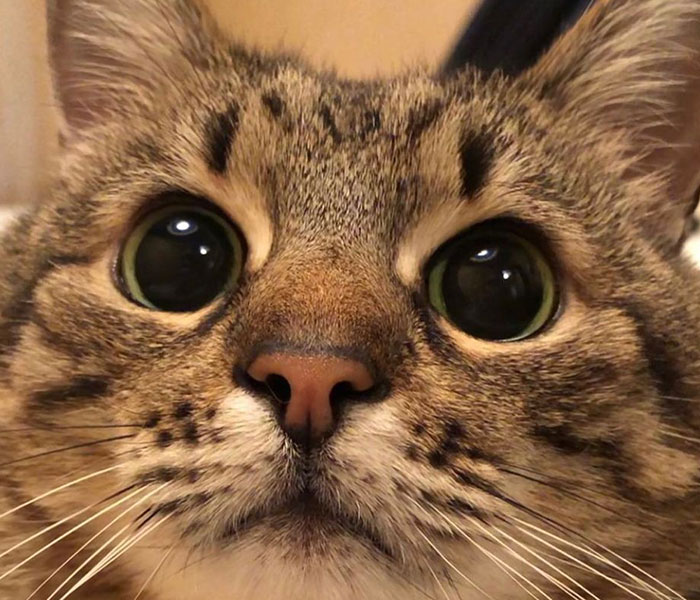 To those unfamiliar with Stepan, here’s a wee bit of backstory. Stepan’s cat mom Anna started posting photos and videos of him on Instagram and TikTok in 2020 and since then, he’s become one of the most beloved kitties on the internet.

And who could not? Just look into the endless void hidden within this cat’s eyes and you will be transported to a place of happiness and glory. Maybe not literally, but we can definitely imagine!

Stepan rose to fame with his unique stare and graceful slouching, judging your life choices with a drink, disco lights and music 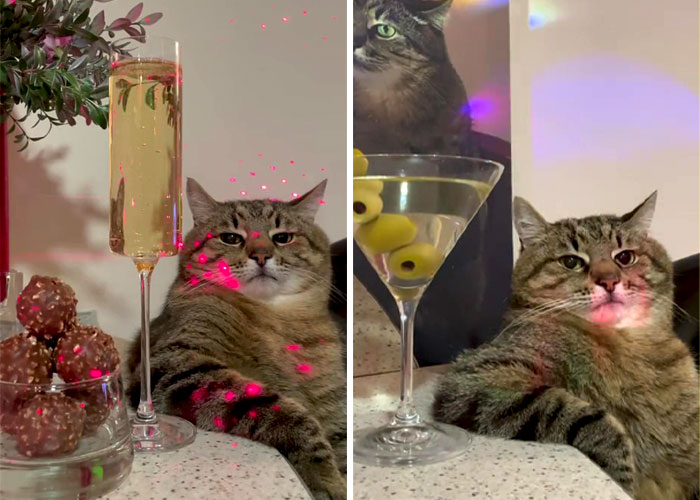 What makes this kitty so special is his indifferent expression, a slightly goofy stare that makes you question your life choices in the best way possible. He is without a doubt adorable. The combination of his expressions, the slouched-back position, the mise-en-scène often featuring a drink, disco lights and fun tunes have boosted him to stardom.

Millions related to Stepan’s home-alone parties and the potential questioning of life itself whilst surrounded by happy-go-lucky things. Or just enjoyment of a cat clearly living his best life. He now has over a million followers on both platforms and people know that they’re guaranteed a good time with Stepan. 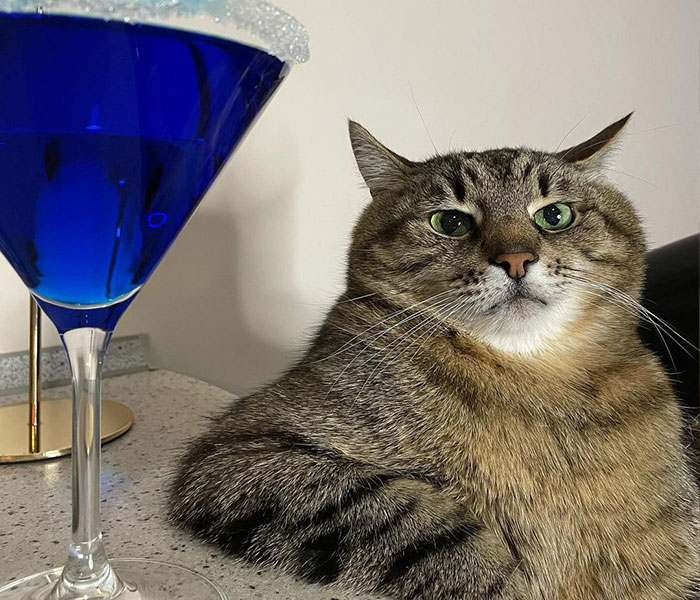 With the situation in Ukraine escalating, fans became concerned for Stepan and his mom’s safety 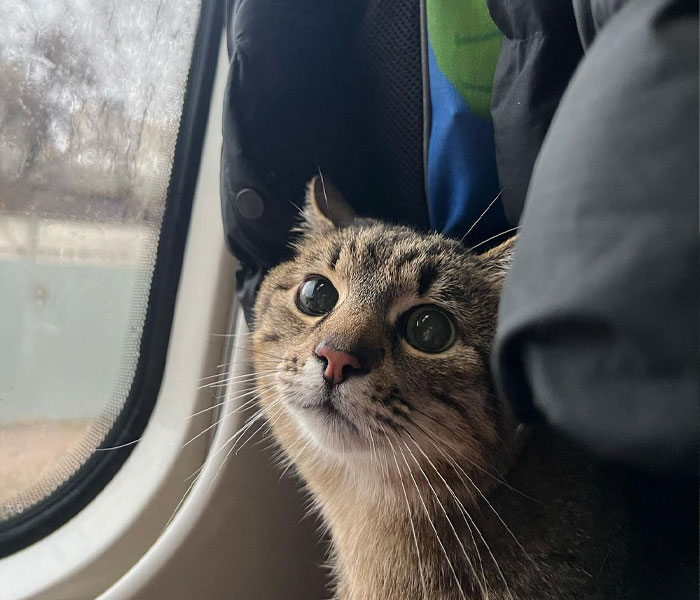 Recently, though, Stepan’s life and routine had to change because living in Kharkiv, the second largest city in eastern Ukraine, became too dangerous. Their fans became concerned when they hadn’t posted for two weeks.

Thankfully, Anna came back with updates on their Instagram page, describing the whole situation and their journey. 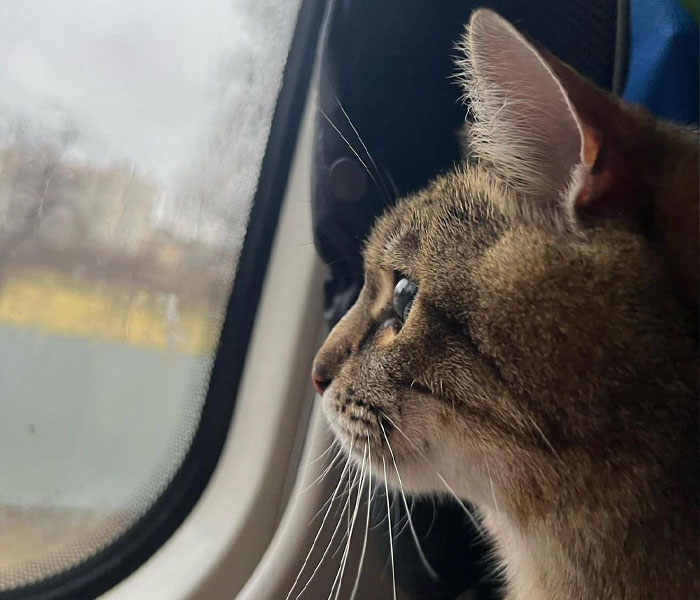 Anna, Stepan’s guardian, came back to Instagram 2 weeks later to give an update on their situation: “the war had come to our house” 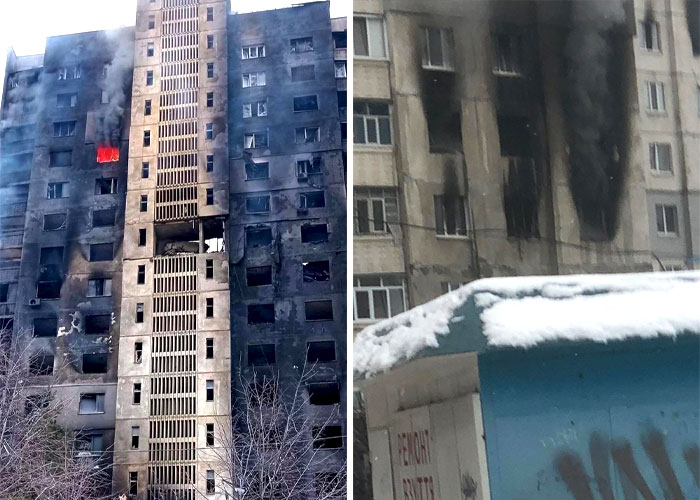 She wrote that on February 24, they were sleeping soundly at home when at around 5am, explosions woke them up. She didn’t understand what was happening at first but half an hour later, another explosion sounded nearby, making the windows tremble.

She said she “jumped up and understood that something terrible was happening! The attack and shelling of Kharkiv (especially on the North Saltovka where we live). We realized that the war had come to our house.”

After hiding out in the basement for a few nights, they were finally able to take the train to the Polish border 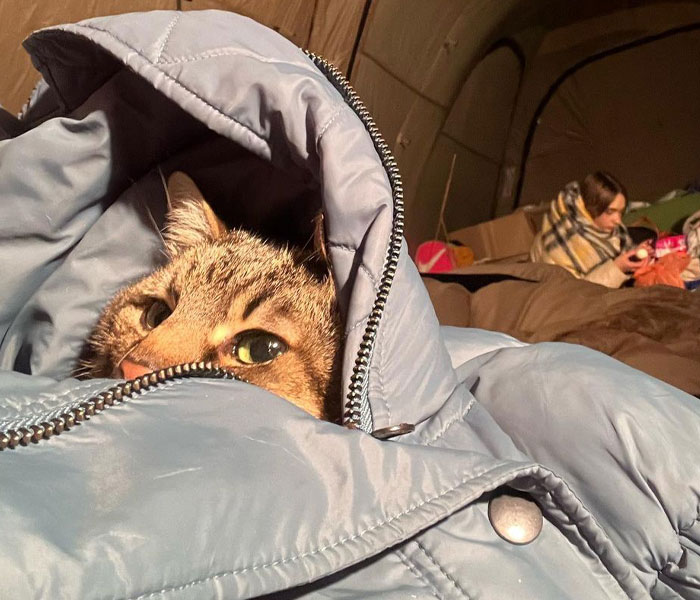 Anna continues to describe the damage to neighboring houses, shells hitting them and setting fires right before their eyes. By some miracle, Stepan’s house remained safe for exactly a week.

She said their house was damaged on the eighth day of war as a shell flew into the neighbors’ balcony. Thankfully, there was no fire but all the windows spilled out in two or three dozen apartments. Also, two shells fell in front of their house.

They spent two nights in the basement with no means of electricity, explaining the lack of information. Then they managed to leave the city. Anna said that Kharkiv volunteers helped out by taking them to the railway station, where they got on a train from Kharkiv to Lviv. 20 hours on a train later, they continued to the Polish border. Once there, Anna noticed the large amount of people, around 4-5 thousand. After 9 hours of waiting, they finally crossed the border.

Once in Poland, they received help from the World Influencers and Bloggers Association, which helped them find housing in France 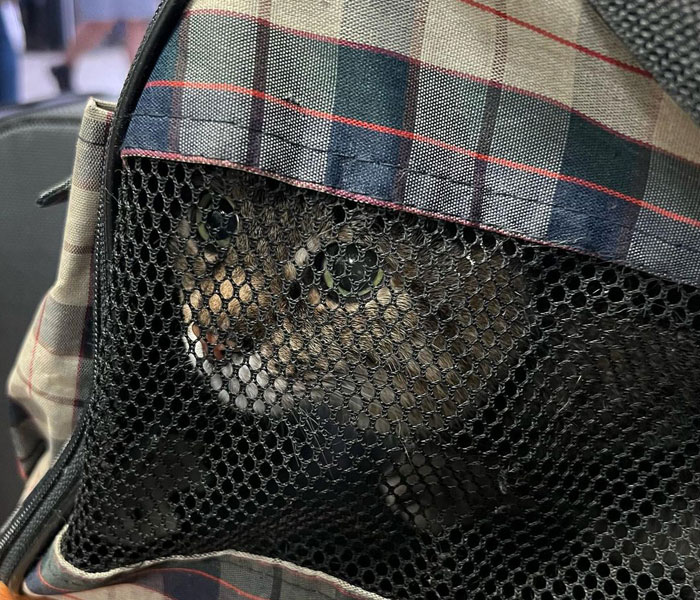 Once in Poland, they were offered help from the World Influencers and Bloggers Association from Monaco. The organization aims to unite influencers around the world and last year they named Stepan one of the top “petfluencers” in the world. According to The Washington Post, the group’s founder and CEO Maria Grazhina Chaplin organized a way to get Stepan and Anna to a safe house in France after a stop in Poland.

In all the pictures shared on Instagram, Stepan looks scared and confused. We can’t imagine Anna could ever make the journey without her feline friend. Having taken him in at one month old and sharing a beautiful 13 years together, there was no way they were going to be separated by a war.

Now that they’re safe, Anna wants to start collaborating with some charities to raise funds for Ukraine, but asks the fans to be vigilant for fraud 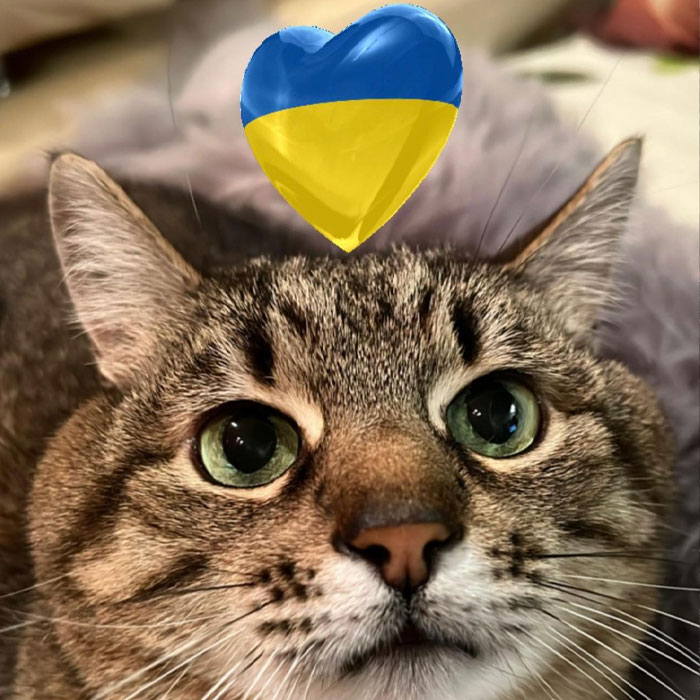 Anna finished her message by saying that they’re waiting for the day when they can return home: “We’re all right now. We worry very much about our relatives in Ukraine and will do the very best we can to help our country.”

They will aim to start collaborating with a few charity organizations and will announce the fundraiser soon; however, there have been a few fakes popping up asking for donations in Stepan’s name.

Anna came to Instagram to address the issue and to declare—they are not asking for donations at the moment. So beware: unless it’s coming from an official source, do not send your hard-earned money. Or you can always have a look at the list of resources here.

There can only be one Stepan! Anyone asking for funding that isn’t coming from the official accounts should be ignored 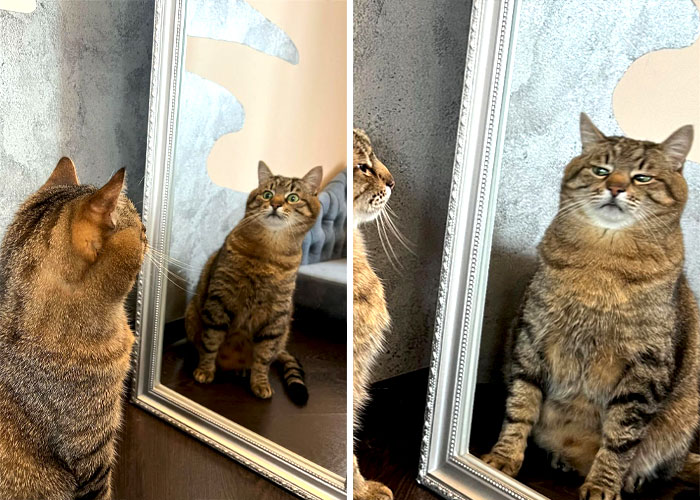 For the time being, we can all reflect on the good times Stepan and Anna have given us and the dozens of pictures that bring a smile to our face 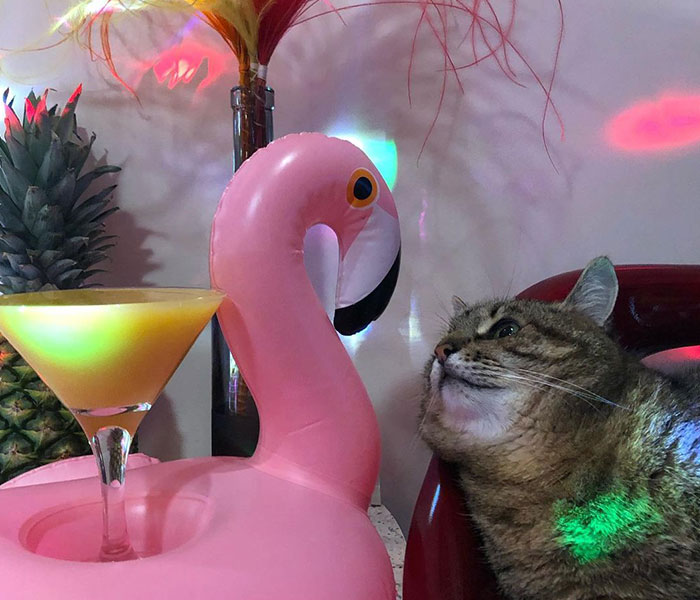 We hope the best for Stepan and Anna and we’re looking forward to enjoying their content.

According to UNHCR, the numbers of people who’ve escaped Ukraine have risen to over 3.5 million and there are no signs of stopping. The war has ruined multitudes of lives, separated families, and shown how quickly darkness spreads throughout a nation. But the Ukrainians are strong, they are supported and, most importantly, they stay together.

Stay strong, Stepan, whilst we await a better tomorrow 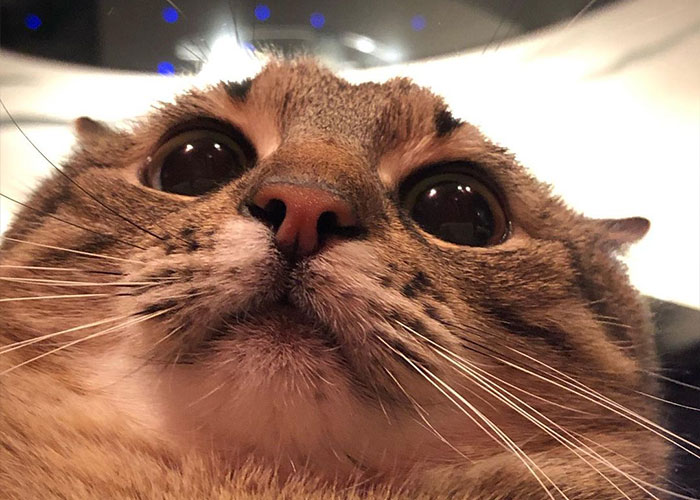 Let us know what you thought of the story in the comments. Are you a fan of Stepan’s? Comment ‘sombrero cat’ for no other reason than to show that you’ve read the article and have enjoyed the countless hours I’ve spent on it. Otherwise, I will have no other choice but to join the cat for a glass of something to drown my sorrows. Have a good day and stay safe!

The post Famous Ukrainian Cat Stepan Gets To Keep All His 9 Lives, Flees To Safety With Family first appeared on Bored Panda.