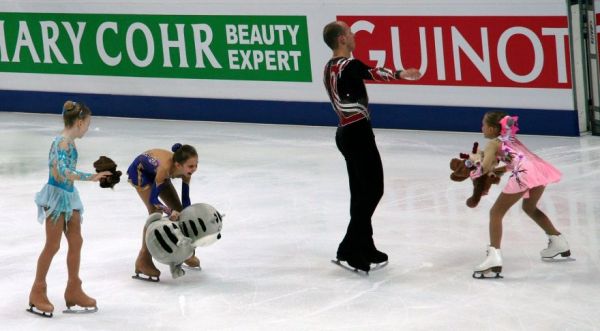 One part of figure skating that you don’t see that much of on TV is the part where a skater’s fans will throw things onto the ice after a performance. At one time, it was customary to throw flowers on the ice, but that left a lot of debris that had to be cleaned up, and in 2001 the US banned flowers from rinks because of security concerns after 9/11. But fans found another way to show their adoration- by throwing stuffed animal toys on the ice. Skaters talked to NBC Sports about the gifts they’ve had thrown at them, which sometimes require an army of sweepers to collect. Michelle Kwan had a full skating outfit thrown once -and it fit her! Elvis Stojko and Patrick Chan have seen lingerie thrown on the ice. Stojko got a bra once with a name and phone number attached. Debi Thomas once got a Domino’s pizza. And of course, there are the stuffed animals.

What happens to all those toys? For international competitions, shipping them all home is out of the question, so skaters pick and choose what to keep, while the rest are given away. Michelle Kwan once threw a stuffed animal on the rink for a skater she admired before she became famous. Now she still has a great number of stuffed toys still stored at her parents’ home, but believes they may be too old to give away. Read about the toys and the stranger items thrown at figure skaters at NBC.  -via Strange Company