Alright. Okay. My long-dead grandpa Milt’s unfinished stained glass menorah piece. It’s been in my basement workshop for literal years now. I keep not tackling the job of picking up where he left off. I want to get past that block. pic.twitter.com/wMUOfItsDt

Artist Josh Millard started exploring the art of stained glass in recent years. When his parents heard, they asked if he’d like to have his late grandfather’s stained glass supplies. Millard didn’t even know his grandfather did stained glass, but Milt Millard had apparently taken it up later in life. In those supplies was an unfinished project- a large menorah. Millard thought about it for three years, and then plunged into finishing it.

This project was intimidating to me for a few reasons: the unusual creative and ethical prospect of finishing someone’s work posthumously; the feeling that any attempt to finish the work would involve first the irreversible decision to destroy a (however damaged and unfinished) existing family artifact; and the sheer logistical complexity of picking up someone else’s design and fabrication mid-stream.

But Dad liked the idea of me finishing it.  And I imagine Grandpa would have as well.  And preserving it indefinitely in bad shape in my basement where no one would ever see it again wasn’t really much of a life for the existing artifact.

So the only difficulties left were: literally everything else.  All the logistical and creative problems of adapting someone’s unfinished work.

Millard Tweeted the project as it went along. His account is much more than a DIY project. Along the way, he grapples with handling and manipulating a fragile family artifact and design decisions for a two-person collaboration in which one artist is silent. Altogether, it makes a beautiful story. And the finished work is beautiful, too. 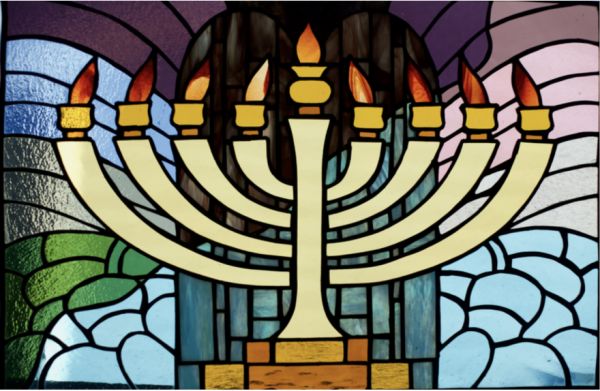 You can follow the process of completing the menorah at Twitter or more easily at Threadreader. -via Metafilter