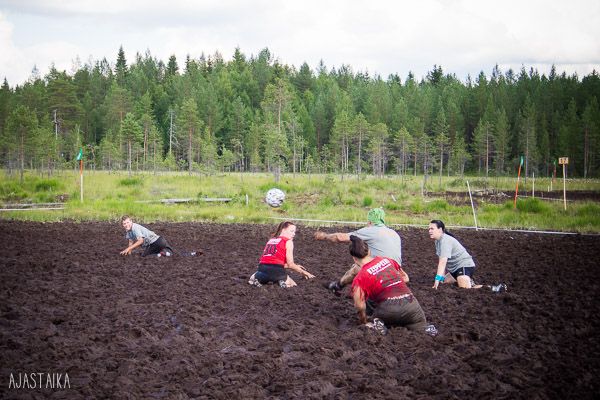 The genesis of swamp soccer was in 1998, when creative town officials in Hyrynsalmi cooked up a festival-like event that would make use of the area’s vast swamplands. Thirteen teams showed up for the first tournament. Since then, the competitive field has grown to about 200 teams.

The recent matches — six-on-six, with 10-minute halves — were played on 20 fields of varying squishiness, spread out over 50 acres of swamp. Finnish rock echoed through the woods.

People striding on seemingly firm ground would disappear suddenly into the soft earth, as if descending a stairway. Some tottered on their hands and knees, like babies. Others stood still, until they were waist-deep in muck. The scores were generally low. Many of the players were drunk.

Finland hosts the various championships because these sports were born in Finland. An article at the New York Times focuses mostly on swamp soccer, but also asks why Finland does sports the way they do. It appears to be a longing for something to do, a culture that values fun over winning, and alcohol. -via Metafilter