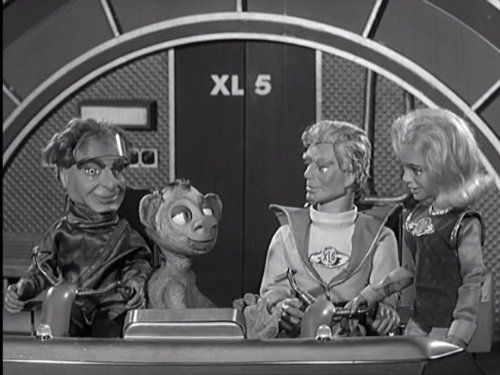 When I was but 10 years old, I was amazed by the premiere of a new Saturday morning cartoon, Fireball XL5, which was the coolest series ever (until the next season, of course).

Of astonishingly good quality, this series utilized puppets instead of claymation, stop-motion animation, or conventional animation. The music track was also catchy and I can recall it to this day even though it has now been over 55 years since I have heard it.

From the IMDb, we find: Fireball XL5 was part of the fleet of interplanetary rockets protecting Sector 25 of the Solar System from alien invasion under the supervision of the World Space Patrol. In command of XL5 was Steve Zodiac, and his crew consisted of Venus, a doctor, Professor Matic, the science officer, and Robert the Robot, the rocket’s mechanical co-pilot. This series was the first to depict a space fleet of patrol ships monitoring our quadrant of space, a concept used in Star Trek TOS a few years later. The characters from the very first episode were amazingly fleshed out by Gerry and Sylvia Anderson, only to be further developed by the talents of the other scriptwriters resulting in a fine continuity right up the last episode, unheard of in those days. Stories involved time travel, space pirates and of course earth domination, which had the puppets smoking, shaving, being tied up and the odd reference to child psychology! -Very adult for a child’s T.V. series.

YouTube contains the complete series and the first episode is embedded below. As you must have guessed by now, the series ran for only one season beginning in 1962, the WTM curse having doomed this one too. Ironically, I don’t watch television anymore.

Try this one on your kids and see how they react. I believe the word is ‘retro’.