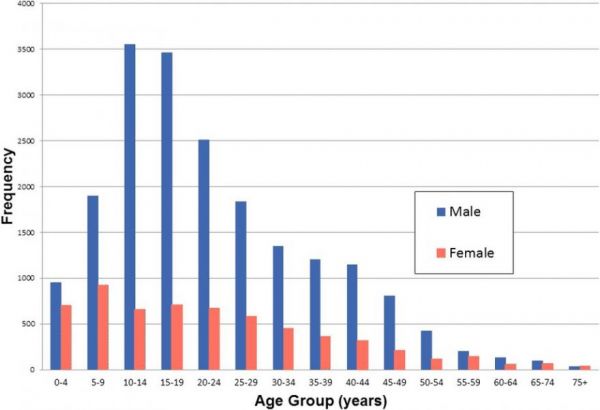 Americans go a little crazy blowing stuff up to celebrate the nation’s birthday. John Adams said that Independence Day should be celebrated with “bonfires and illuminations,” even though he was actually referring to July 2. Our national anthem has “the rocket’s red glare, the bombs bursting in air,” leading us to do just that on July 4th. The majority of people who set off fireworks don’t thoroughly consider the dangers, which can lead to a trip to the hospital.

According to the US Consumer Product Safety Commission, fireworks were implicated in 12,900 hospital visits, resulting in eight deaths in 2017. There were 800 hospitalization from firecrackers, 1,200 from sparkler injuries, 400 from Roman candles, and 300 from bottle rockets (if you needed clarification, a device called a “bottle rocket” is not perfectly safe).

Who would you have guessed is affected most? You’re exactly right -teenage boys. A 2014 study in The Journal of Surgical Research came up with the data in the above graph (the raw numbers are from 2006-2010). See more statistics on fireworks injuries at Vox.