In 1978, New Museum founder Marcia Tucker put on an exhibition called “‘Bad’ Painting,” comprising figurative works that she insisted were actually good. In paintings by artists like William N. Copley, Joan Brown, and Neil Jenney bizarre scenes prevailed, in which long-limbed figures meandered through cities; the work was intentionally raunchy, and put sexual mores to the test. At the time, Abstract Expressionism, with its bravado brushwork, was still considered the paragon of art making, and painters—to the extent that they existed at the end of a decade dominated by conceptual art—were on the cusp of the macho Neo-Expressionism of Julian Schnabel and his New York cohorts. “‘Bad’ Painting” was meant as an affront, and it worked. In a corrosive review in Artforum, one critic wrote, “Luckiest of all are those who walked into the show, saw a lot of bad paintings and left.”

It’s quaint to think that figurative painting could ever have been so provocative. Over the past few years in New York, each art season brings a new helping of the stuff. At first it was exciting: a welcome relief from the market-speculator-friendly process-based abstraction that critic Walter Robinson memorably dubbed zombie formalism. That trend ran its course, and in 2014 a strain of figuration started to emerge whose brand of Surrealism seemed especially suited to the chaos of the digital age. In placed of what Jerry Saltz called “crapstraction,” there were images in which bodies contorted in unnatural poses; bizarre assemblages of objects that felt fraught with meaning; provocative mashings of art-historical tropes; collapsed divisions between male and female, analog and digital, real and unreal; allusions to current events, with some idiosyncratic tweaks. It was an injection of vitality into a medium that had come to seem cynical.

The trouble is, this style stopped evolving. Even as the world was transformed by conservative political regimes, new threats of war, and increased awareness of long-standing forms of prejudice, figuration for the most part has rolled along in this same old quasi-Surrealist bubble. Lately, this mode’s life cycle is coming to seem unnaturally extended. Welcome to zombie figuration. 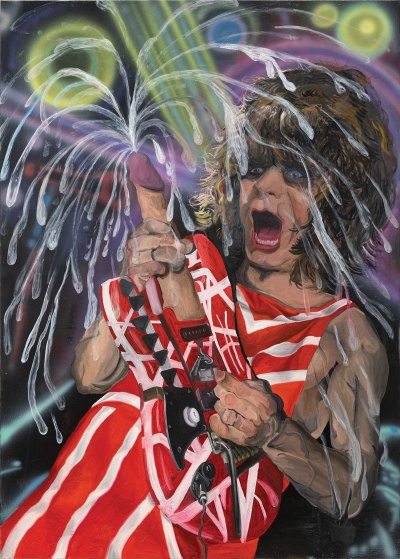 Let’s be clear: most of the practitioners of zombie figuration are good artists; their work is simply no longer moving things forward. In his large canvases, Mathieu Malouf relies on pop culture for material (his subjects include Olivia Newton John and Gremlins) and he aims to provoke, depicting, for example, Eddie van Halen shredding on a guitar whose neck also happens to be an ejaculating penis. Malouf is a tremendous stylist—in The Kiss (unequal couple), 2020, he manages to convincingly replace the couple in the iconic Rodin sculpture with Miss Piggy licking Kermit the Frog—but the sum effect is that of a snarky one-liner. Many of his paintings have real mushrooms affixed to their canvases. If you can’t sort out the reason for this, you must not be in on the joke.

Other young figurative painters ascendant on the market demonstrate variations of the Malouf method: they combine several unlike things and call it a picture. Jamian Juliano-Villani makes absurdist scenes in which an endless slew of unlike objects collide. Emily Mae Smith has gotten an unlikely number of artworks out of no more than re-creating famous paintings with the human subjects replaced by broomsticks. Issy Wood employs a drab palette to depict body parts in possession of—and sometimes fusing with—different kinds of weaponry, household items, and decor.

There are many other artists like these. The influence of Surrealism hangs heavy over them, and it seems in no way a coincidence that their ascent has coincided with a spate of retrospectives devoted to giants of that movement, among them Leonor Fini and Dorothea Tanning. Fini and Tanning had a predilection for bizarre eroticism and anxiety-provoking juxtapositions, an approach that serves today’s crew of young painters well in their attempts to upend gender binaries and deconstruct conservative-minded sexual norms. Sadly, what they seem not to have adopted from their forebears is any sense of subtlety or nuance. 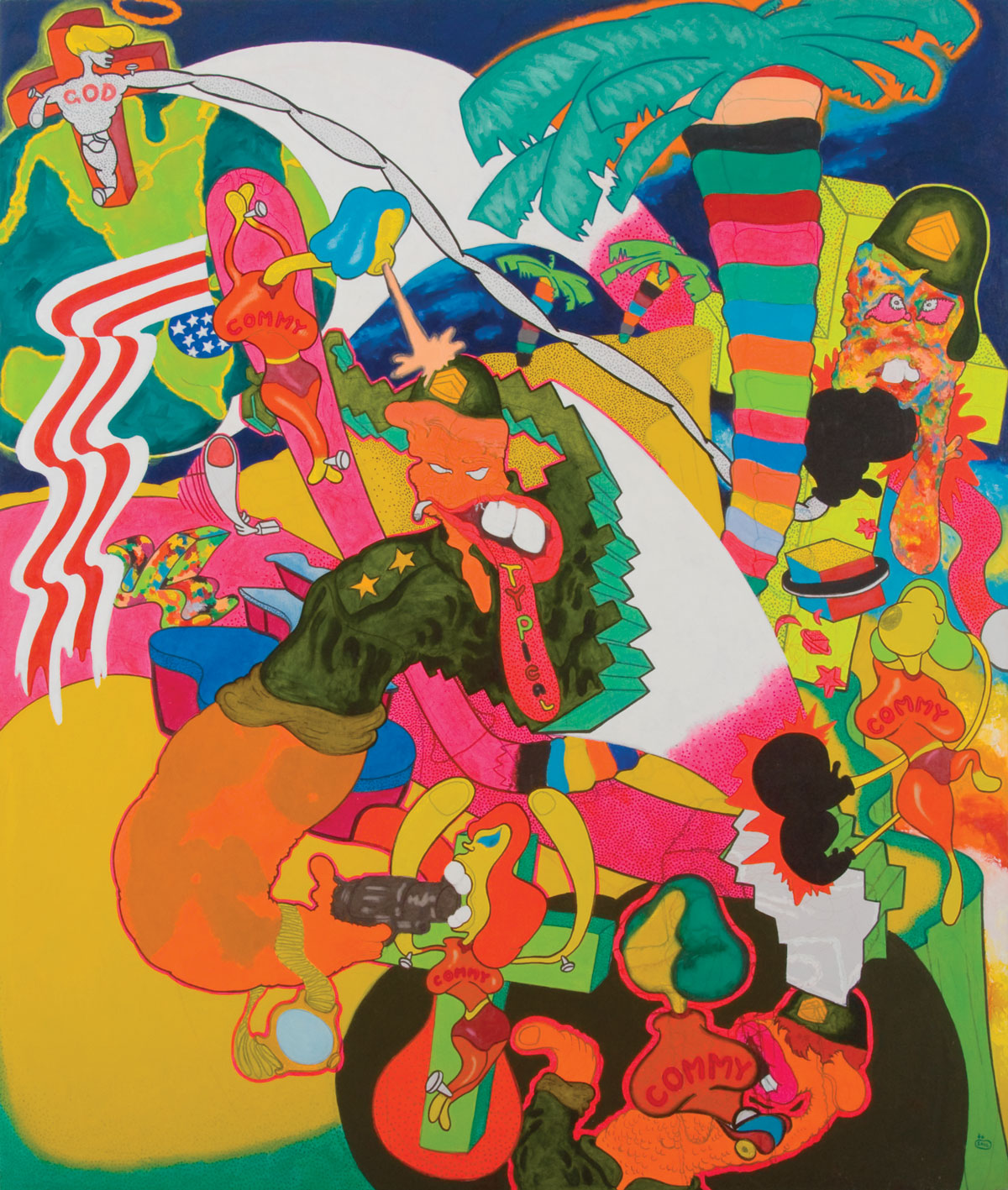 Maybe that’s Peter Saul’s fault. Looming larger than the Surrealists for these young painters, and closer in time, is the influence of Saul, whose New Museum retrospective, finally achieved at age 85, was interrupted by the coronavirus. Malouf & Co.’s work may not be as problematic as Saul’s, but it’s also less exciting.

“Irascible” was one of the terms initially applied to the Abstract Expressionists, but it might be an even better fit for Saul, who, starting in the early 1960s, began making brash paintings that spoofed that movement’s hifalutin tendencies, often with references to Superman and pop-cultural icons thrown in. His best works are those from the mid-’60s featuring overt phallic references and bullets that whiz by cluttered refrigerators, but it’s what came after that that has appealed to younger artists.

Since the late ’60s, Saul has been making sprawling canvases based on current events—history paintings in the same lineage as Ingres’s and Delacroix’s—that seethe with political malaise. They’re rife with rude allegories: In one from 1966 called Vietnam, a crucified figure labeled “GOD” uppercuts an American soldier. In another from 2017, Donald Trump in Florida, the eponymous subject morphs into a big, ugly alligator meant to allude to Florida and Trump’s Mar-a-Lago resort there. 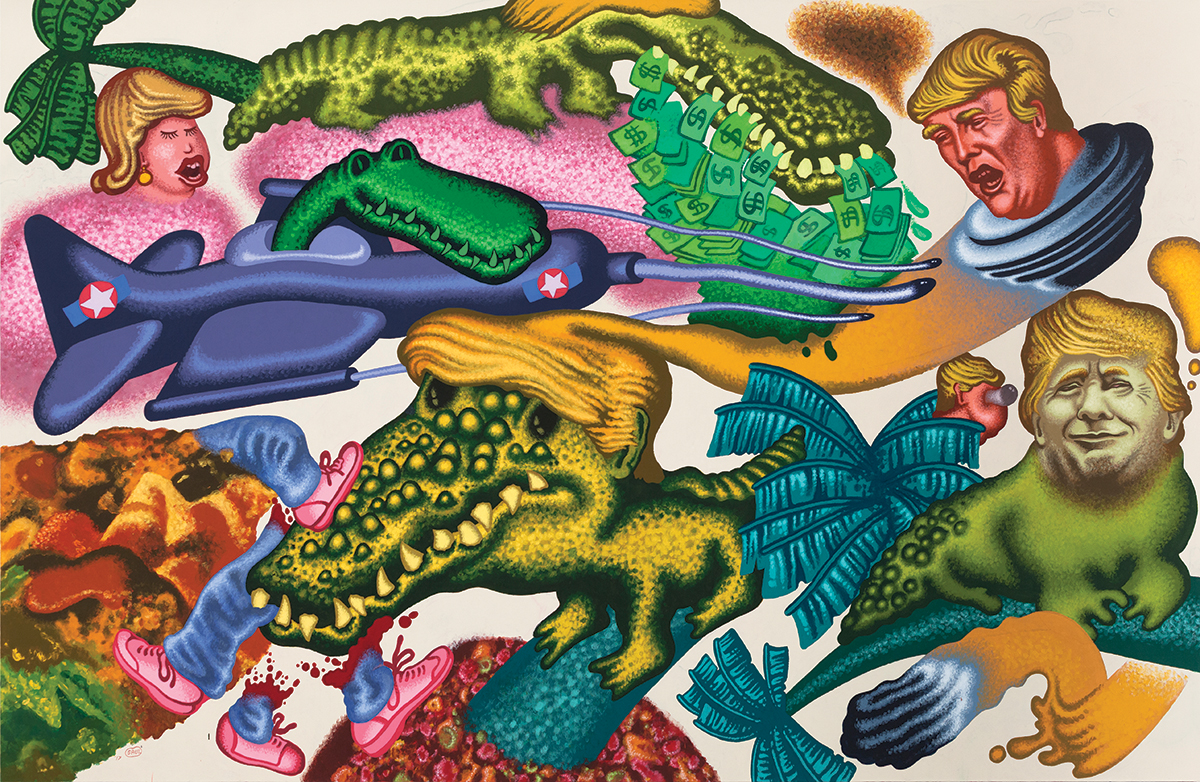 Saul is a dazzling formalist, and one’s eye never tires of zigzagging around his canvases. But if his graphically violent and sexual content once provoked a political reaction, it now tends to offend in a different way. Some of his Vietnam War–era paintings feature Asian women being raped by Americans with penises that wind across the canvas; the women’s eyes are transformed into slits, and their tongues loll out, like dead cartoon characters’. This is not an anomaly within Saul’s oeuvre, in which political activist Angela Y. Davis is shown pierced by knives, and prisoners at Abu Ghraib appear as defiled lumps of flesh. The New Museum’s exhibition, curated by Massimiliano Gioni and Gary Carrion-Murayari, did not downplay the rudeness of Saul’s paintings, but it also didn’t do enough to properly examine the real politics at play.

Rising alongside this Surrealism-via-Saul is a new kind of appropriation art. The works of Sam McKinniss gleefully copy imagery found in mass media, regurgitating instantly recognizable pictures sans context. In one titled Lindsay (2019), he re-creates a photograph of Lindsay Lohan snapped just before she was arrested for allegedly hitting a man with her car in New York and fleeing the scene. McKinniss seems to relish stealing the image, accentuating Lohan’s befuddled expression and smudgy makeup, and he compounded the joke in a recent show by exhibiting Lindsay near another painting based on a publicity photo for the 1998 remake of the Disney film The Parent Trap, in which an 11-year-old Lohan does double duty playing twins. It’s sort of a funny gesture, but is ultimately vapid, and even a little cruel. 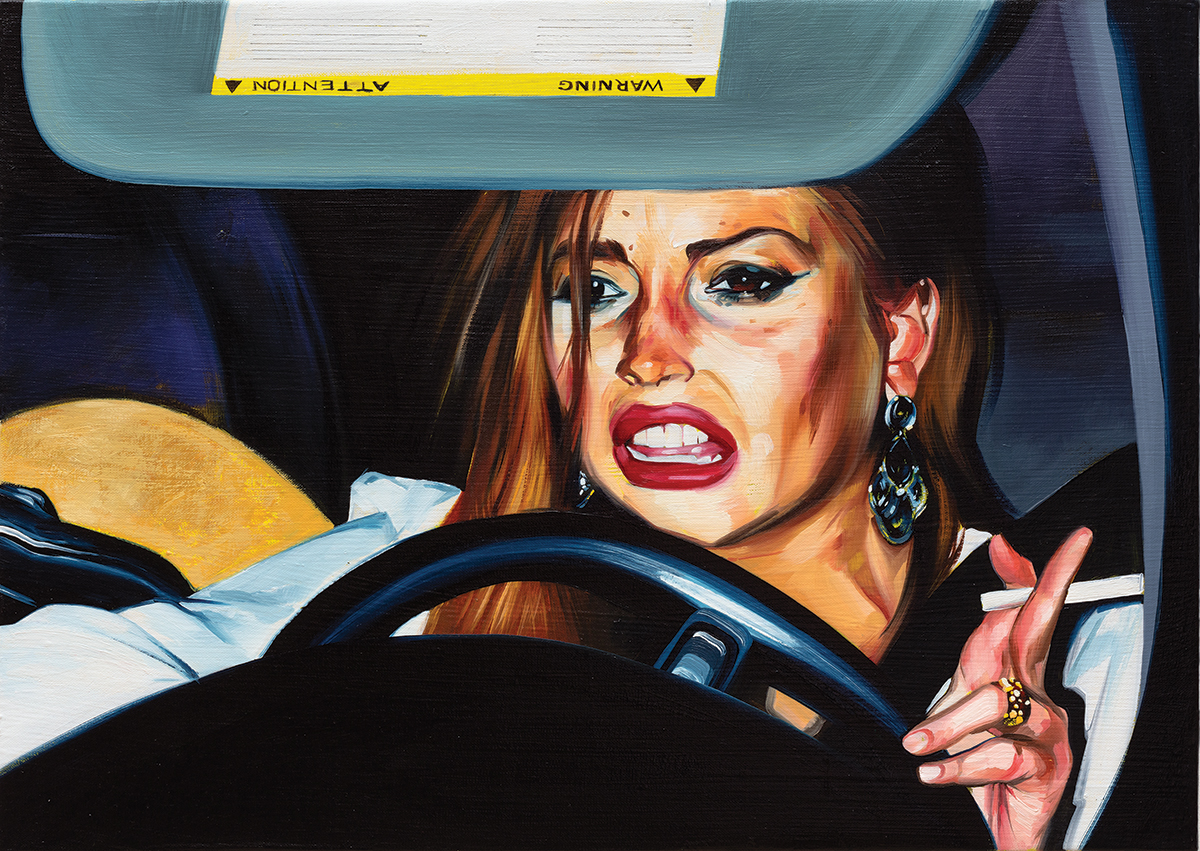 Leidy Churchman’s appropriations are cooler-headed than McKinniss’s: a screenshot of a New York Times video on YouTube about Buddhism, chintzy signage found online (one, in bad cursive font, reads “The Laundry Room”), a picture of a Reclining Buddha sculpture in Sri Lanka. Like McKinniss’s, Churchman’s attitude toward images is nonhierarchical. Unfortunately, it’s unclear what any of this artistic thievery is meant to achieve. These artists seem to suggest that in the digital age, the originality long prized by painters has been negated. But this is neither revelatory nor, ironically, all that original, given that such issues have been artistic fodder since the Pictures Generation painters took them on in the 1980s.

Very recently, certain artists have been suggesting a way forward for figuration. Jeanette Mundt appropriates imagery, focusing loosely on visual tropes that pervade art history. In one recurring image, she shows a tattooed Virgin Mary–like figure being consumed by flames; in another, a nude woman crouches on a bare bed, in a pose suggesting she is either an artist’s model or about to engage in a sex act. Mundt seeks not only to co-opt but, with those flames, to destroy imagery that has long been used to demean women. In mining the history of figuration, her paintings play productively at its limits. 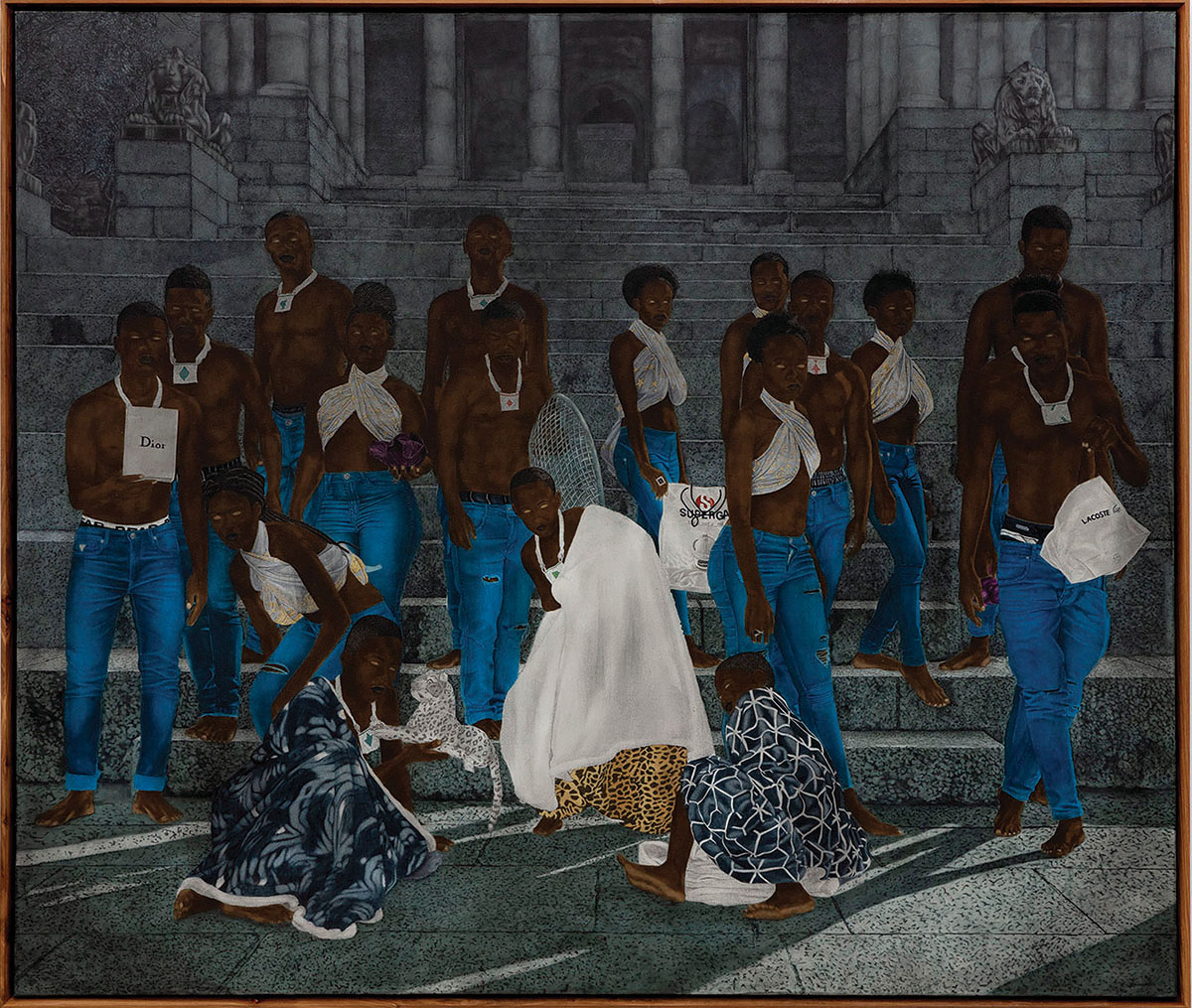 This hall of mirrors approach might also apply to a 2018 painting by Hamishi Farah, a quaint-looking image of a young boy cradling what appears to be a shell. Despite its unassuming style, the painting has an ugly context. The boy is artist Dana Schutz’s son, and Farah made the painting after Schutz showed her own painting, Open Casket, a controversial work based on a photograph of Emmett Till’s dead body, at the 2017 Whitney Biennial. Farah’s use of figuration turns the style into a form of revenge.

Work like Farah’s acknowledges that it’s not enough to create artworks that refer only to themselves, drolly recycling imagery and/or rearranging it in lame Surrealist tableaux. To that end, a growing crop of artists has begun making work focused on what exists beyond the canvas. This past spring, it became apparent that portraiture, in particular, was undergoing a mini renaissance, and artists were finding creative ways to communicate ideas about historically marginalized communities through it. 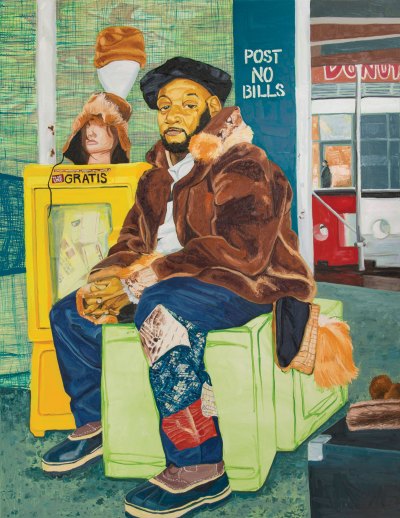 Concurrent with the Saul survey, the New Museum gave a full floor to Jordan Casteel’s magnetic paintings, many of them depicting strangers in Harlem in a mode that recalls Alice Neel. Casteel’s work is still rough around the edges—having just barely turned 30, a museum show of this scale might be too big for an oeuvre still in development—but the art on view demonstrated her ability to synthesize long-standing portraiture styles with today’s focus on gender, sexuality, and race. In Devan (2014), she depicts a nude man on a green chair, behind him a poster of Trayvon Martin. Devan’s skin is rendered in shades of purple, as if to make viewers wonder why they might think of him as Black.

A similar interest in race pervaded Cinga Samson’s exhibition at Perrotin gallery. Most paintings in the show featured Black men or women standing frontally before the viewer. Depicted at twilight, Samson’s melancholy subjects pose resolutely for the artist, some clutching shopping bags bearing brand names. Samson, who is based in Cape Town, has described starting out as a still-life painter before realizing that he wanted to create images that are not meant for white Western viewers. Perhaps in tribute to this, Samson has rendered his paintings somewhat illegible—the subjects have almond-shaped eyes, but they are white voids—their inner world is inaccessible to us. Unlike so much figurative painting that strains to please, offering attractive imagery in lieu of meaty concepts, Samson’s paintings pose a challenge. His haunting figures dare viewers to find a new way of reading them.

A version of this article appears in the Summer 2020 issue of ARTnews, under the title “Night of the Living Figuration.”