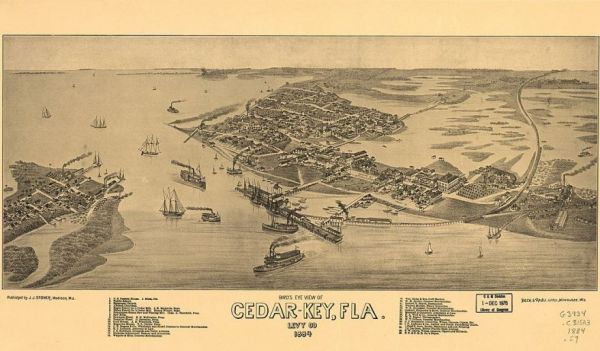 Despite the framing of the headline, this story happened in the 19th century. A politically-connected bully named Bill Cottrell was elected mayor of Cedar Key, a town of around 2,000 people. He then went to work ruling the village to suit his whims, daring anyone to stop him.

Residents were well-acquainted with the young mayor’s cruel—and at times homicidal—mood swings. Cottrell was first elected to the office in March of 1889, and was fond of using his firearms to intimidate his constituents. Readers across the nation would later learn of him forcing a black man—at gunpoint—to beat a telegraph operator senseless. Women shopping at a dry goods store were reportedly held hostage at gunpoint, seemingly for Cottrell’s amusement. As a child, rumor had it, he used a pocket knife to stab an elderly man who had dared to correct him, and the local Schlemmer House hotel was marked by bullet marks from the mayor’s drunken pursuit of a fellow patron.

“Aged men and prominent citizens have thus been treated…Ladies of the highest social standing were not exempt from these insults,” the New York World summated.

While his notoriety may have lent itself to exaggerated retellings, together the anecdotes paint a picture of Billy Cottrell as a young man out of control. “When [people] talk about him when he’s not intoxicated, he’s a normal person. He behaves, he gets along,” says James L. “Jim” Cottrell, great-grandnephew of Billy. “And then you throw some whiskey in him and he turns into Billy the Kid.” (Five years earlier, when racing his family’s schooner, Nannie, in Tampa Bay, another boat pulled ahead. An angry Billy ran below deck for his gun to shoot the competition before crewmates reined him in. The incident “speaks volumes to his character,” says Cottrell. “It doesn’t bode well.”)

Cottrell’s reign of terror went unchallenged until a new federal customs officer arrived and was so appalled at Cottrell’s behavior that he appealed to his employer, the US government, for assistance. The Revenue Cutter Service sent a ship to Cedar Key with the full weight of federal authority. Though the federal “invasion” was instrumental in bringing Cottrell down, his final comeuppance came from another source. Read the story of Cedar Key’s bully mayor at Smithsonian.