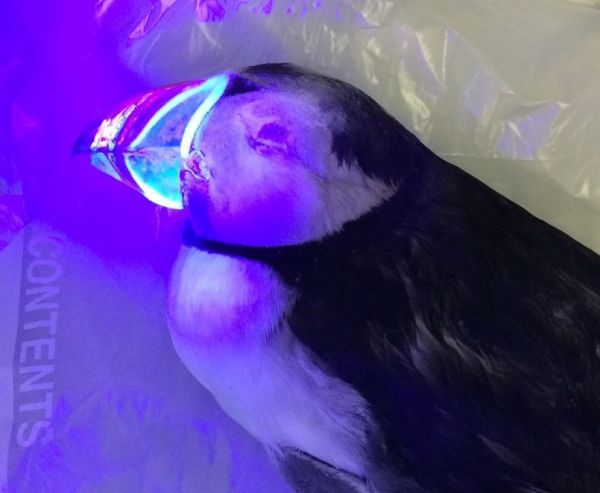 British ornithologist Jamie Dunning normally studies twites, but for some reason he turned an ultraviolet light on a puffin carcass in January and found that its beak lit up like a Day-Glo stick at a rave. Now, these birds don’t have blacklights at their parties, but they do have the ability to see colors we cannot. Humans see colors in a mix of red, blue, and green, while birds have tetrachromatic vision, meaning they have a fourth color available to them. A version of the fluorescent colors of the puffin beak could be not only visible, but important to them.

Birds probably don’t see those ridges all lit up like we do, said Dunning.

“It’s hard to say what it would look like [to them], we can’t comprehend that colour space.

“But almost certainly it’s attractive to the birds. They must be able to see it — that’s the only reason it would exist.”

The next challenge for Dunning is to study the beaks of live puffins under an ultraviolet light. For that step, he has designed sunglasses for the birds. You can see those, and read about the research, at  CBC. -via Metafilter