One of the main advantages of the WandaVision series, in addition to the wonderful acting of Elizabeth Olsen and Paul Bettany, according to some critics, is that the show, in fact, has become a kind of an anthology of American television, from the fifties to the present. However, despite the obvious mastery of styling, there is one area in which the creators of WandaVision still failed. Do you want to know which one? The age of the characters.

Yes, no matter which movie era is portrayed in the series, Wanda and Vision look exactly the same – like a young woman and a young man (okay, a young android, but that doesn’t change the point). But in fact, if you look at how characters of the same age were portrayed in different decades, you can be strongly surprised.

For example, as surprised as Jessica Ellis – an American writer who, on her Twitter account @baddestmamajama a few weeks ago, shared her emotions about the fact that the characters in the film Father of the Bride performed by Steve Martin and Diane Keaton, who you can see on the screen, according to the plot, are about 45 years old. And just look at them! No, it’s not even about hair – Steve was gray in the eighties as well – look at the styling of the characters!

It all started with one American writer who observed that the Father of the Bride main characters are in their mid-forties, according to the plot 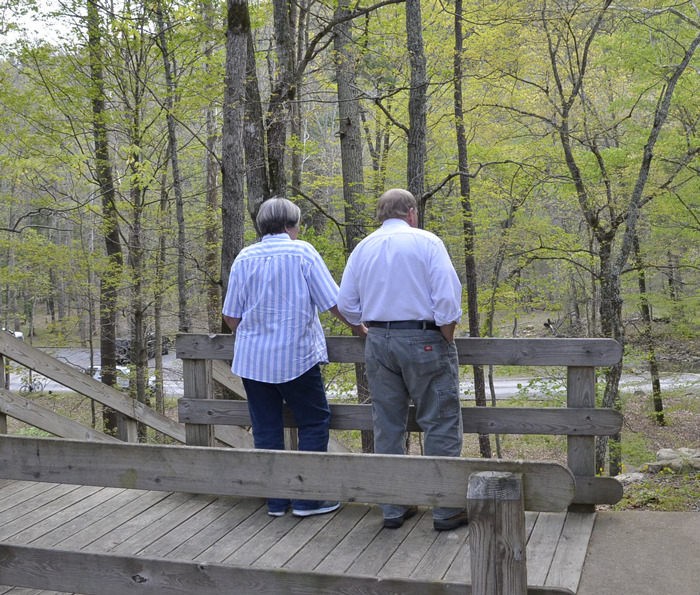 Jessica’s tweet instantly went viral, gaining almost 90K likes and about 5.5K retweets, and in addition, thousands of people from all over the world came to the comments, as they, like the original poster, were amazed by this keen observation, and also began to give their own examples of changes in the perception of age in Hollywood over the past three decades. 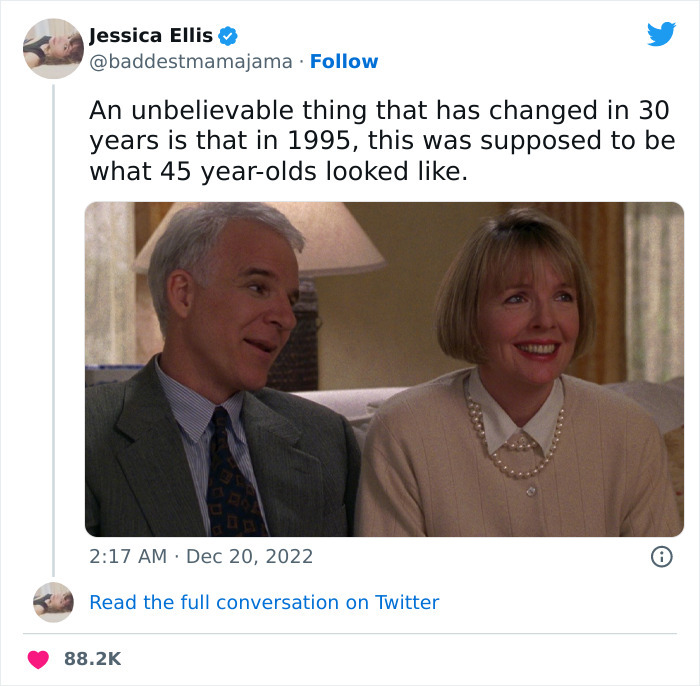 Yes, Jessica notices that, firstly, in the film, as well as in the sequel released five years later, the age of the characters is specially emphasized – their mid-forties. Secondly, styling. No, not even like that – STYLING. Yes, thirty years ago in Hollywood, they were absolutely sure that people over the age of forty look and dress like that! 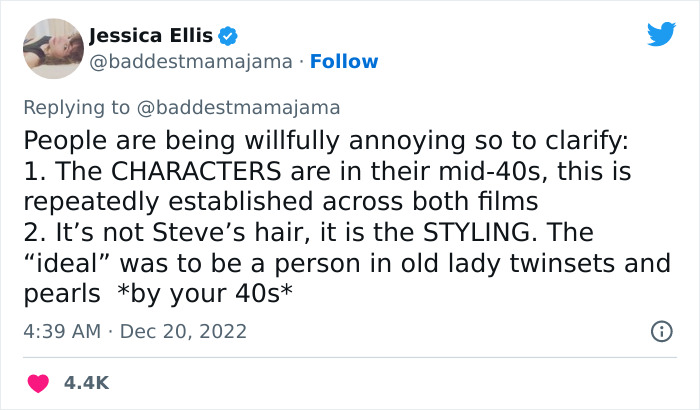 By the way, both performers of the Banks spouses’ roles in the films are fully consistent with the age of their characters – both Steve and Diane were in their mid-forties by the release of the first film. On the other hand, if you look at the styling of fifty-year-old Spencer Tracy in a similar role in the original 1960 movie, you’ll be even more amazed at the shift in public perceptions of age and aging.

Some of the commenters, now being older than the Banks spouses themselves, still perceive them as their own parents

By the way, one of the people in the comments ironically remarked that he is now 47, and still perceives the main characters of this film as his parents. “People take care of their skin and teeth so much better now. And of course there are no fashion rules now,” a person in the comments wrote. “Millennials have ruined aging!” another one expresses their wit.

In fact, healthcare and healthy lifestyle promotion have done a great deal for the last decades

As it always happens, the truth lies somewhere in the middle, even if we filter out obvious exceptions (yes, we are talking about Tom Brady now). Even over the past thirty years, not to mention half a century, healthcare and the promotion of a healthy lifestyle have done their job. And that job is amazing! Suffice it to recall, for example, that in 1989, Ronald Reagan left his second presidential term at an age younger than Joe Biden was elected for his first time. Modern healthcare and sports are doing great things! 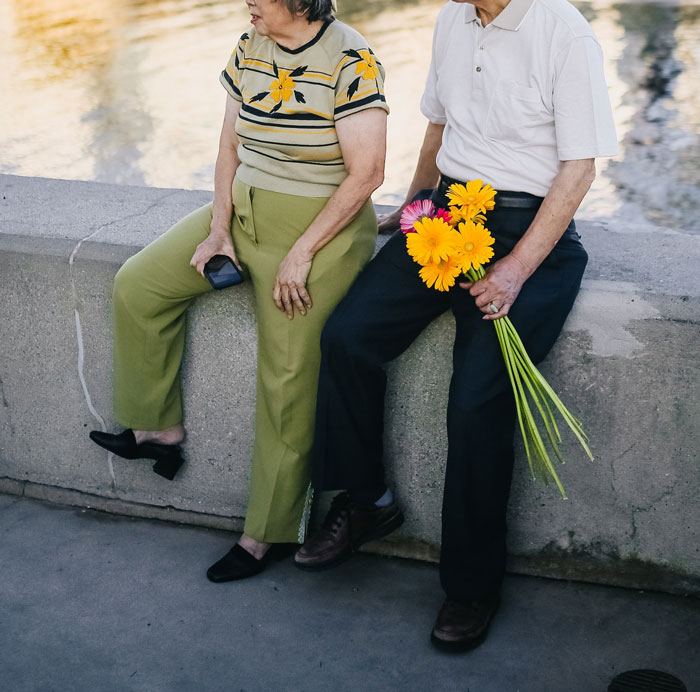 On the other hand, some users still like the reserved style of the Banks spouses. “They seem very stylish to me, even though not my tastes,” one of the commenters admits. And people also point out that even now, more than thirty years after the release of Father of the Bride, there are plenty of men and women in their 40s who look completely like this. 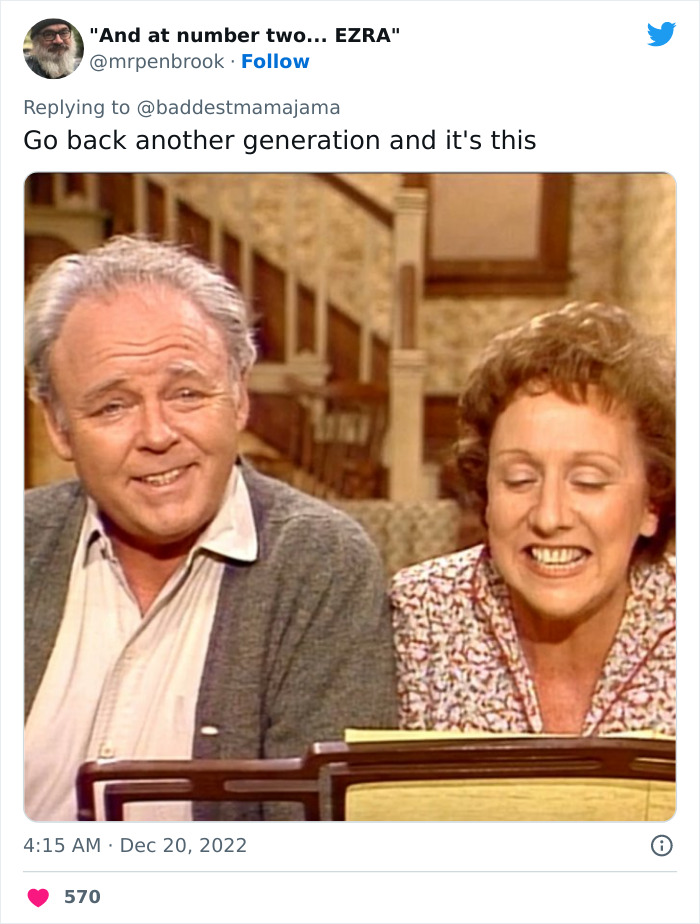 Still, Hollywood has indeed come a long way in redefining age, style, and what’s “appropriate” and what’s not. Just look at a couple of shots from the recent reunion of the heroines of Sex and the City, and compare them with the cult series of the eighties, The Golden Girls. Now just imagine that the ages of most of the characters in both series differ by only a few years. Yes, millennials have definitely ruined it all, and aging as well…

We’re pretty sure that you also have something to say about this particular story, and maybe bring your own examples from culture or real life. In general, the comments under the post are highly appreciated, as usual.

The post Folks On Twitter Are Talking About How 45-Year-Old Movie Characters Were Portrayed 30 Years Ago Compared To Present Times first appeared on Bored Panda.