So, Elon Musk is back in the news. No, unfortunately, it’s not a follow-up to the whole duel he was thinking of having with Russia’s President Vladimir Putin. It’s Tesla-related news.

Folks have been talking about the two e-mails from Elon Musk that have been leaked recently, declaring that all Tesla executive staff must return to the office to continue their duties, or else they will be deemed “resigned”, i.e. they won’t need to come back at all.

Elon Musk is in the news again, this time for his decision against remote work at Tesla 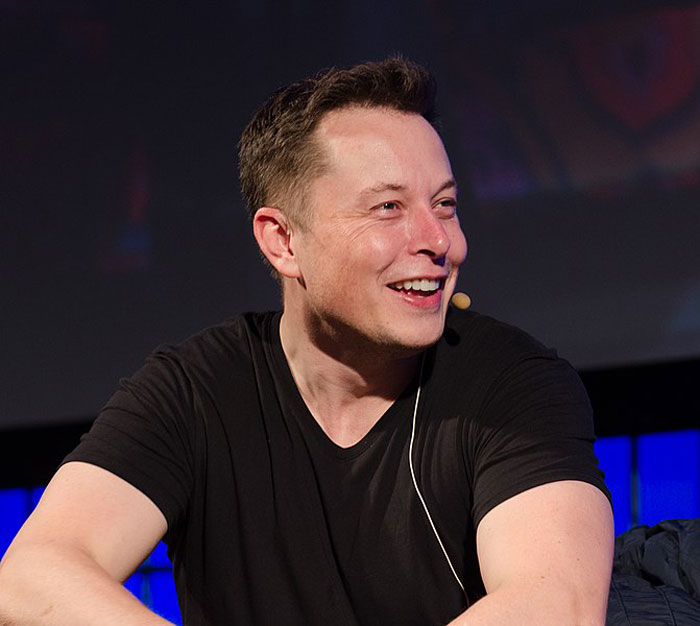 E-mails by Elon Musk were leaked, declaring that Tesla execs will now have to spend at least 40 hours per week in the office, with the option to work additional hours remotely 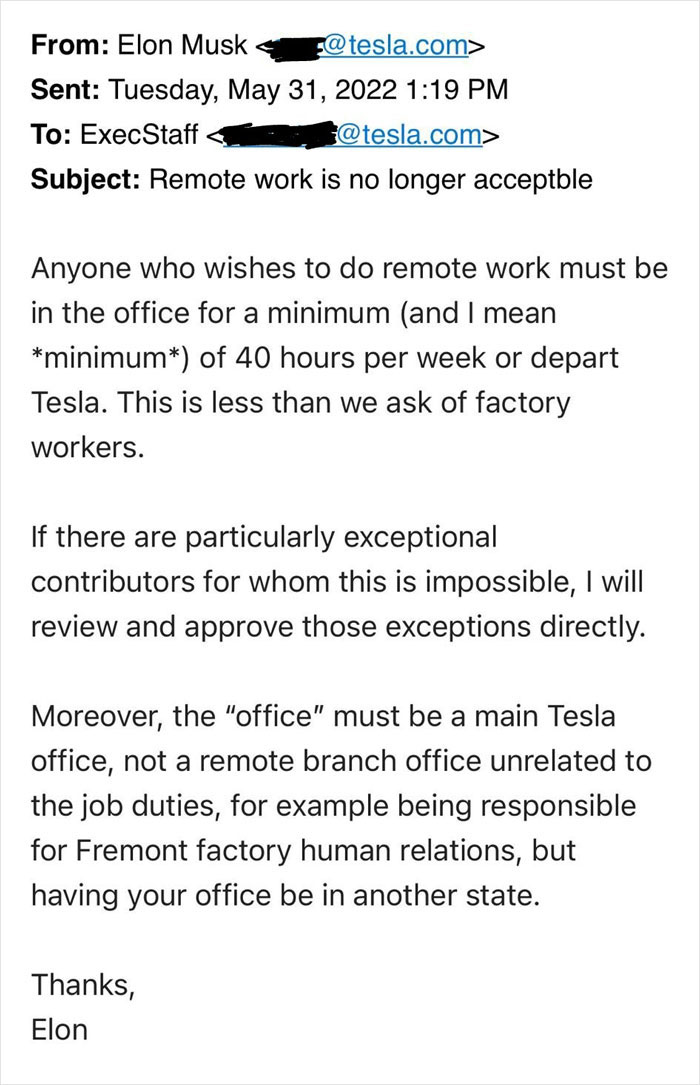 In his e-mail titled “Remote Work Is No Longer Acceptble” (sic!), he detailed that executives will now have to work from the office for a minimum of 40 hours a week. Hours beyond this minimum can be fulfilled from a remote location, e.g. home.

He also noted that this minimum is less than what is required from factory workers.

Besides this, he also elaborated in this, as well as his next e-mail, that “office” means the office that the employee belongs to, their branch with their colleagues, and not a location in a different state or one where he or she wasn’t hired to perform their duties.

There was a second e-mail clarifying what onsite work means 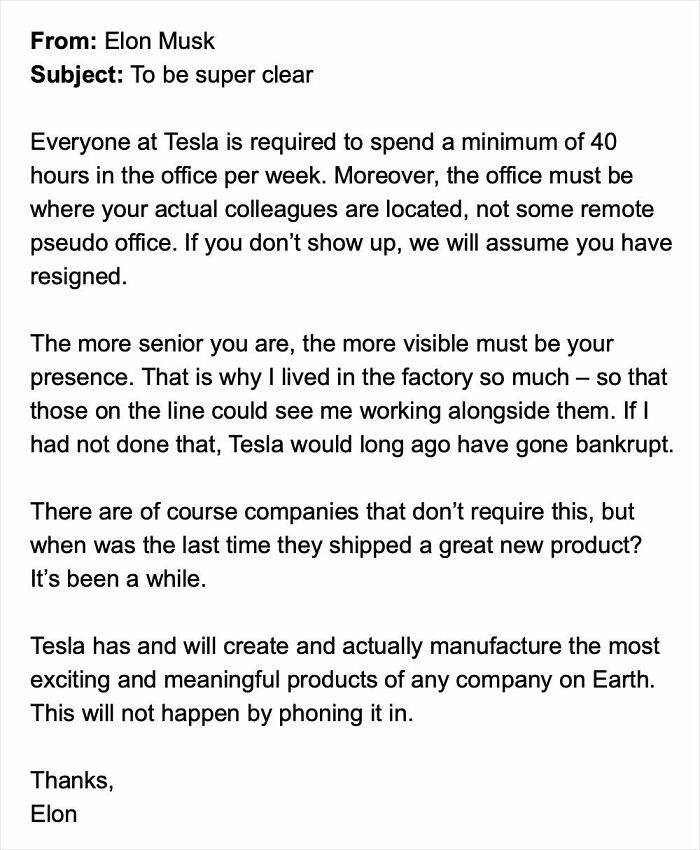 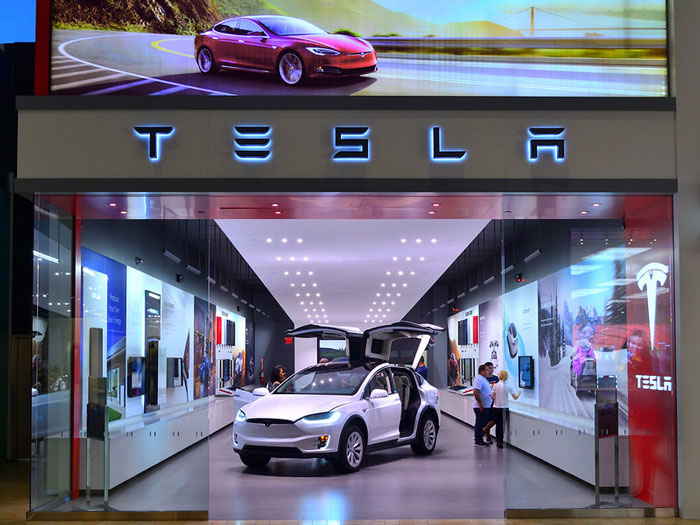 In the next e-mail, Musk elaborated that the more senior an employee is, the more visible they have to be (whatever visibility here means). He gave an example of how he practically lived in one of the factories so that those working on the line could see him working alongside them.

Musk believes that being in the office is key to ensuring Tesla’s success. He explained that other companies might allow for remote work and do just fine, but when was the last time many of them shipped a new product? “It’s been a while”

He continued to say that making a meaningful and exciting product is hardly done over the phone, and so folks should return to the office to make it happen.

After these letters were leaked, Musk was called out by Twitter user @WholeMarsBlog, asking to comment on this move to the people who think work from the office is an “antiquated concept.”

But folks had mixed feeling about it, with the conversation turning into a debate with a majority arguing for remote work 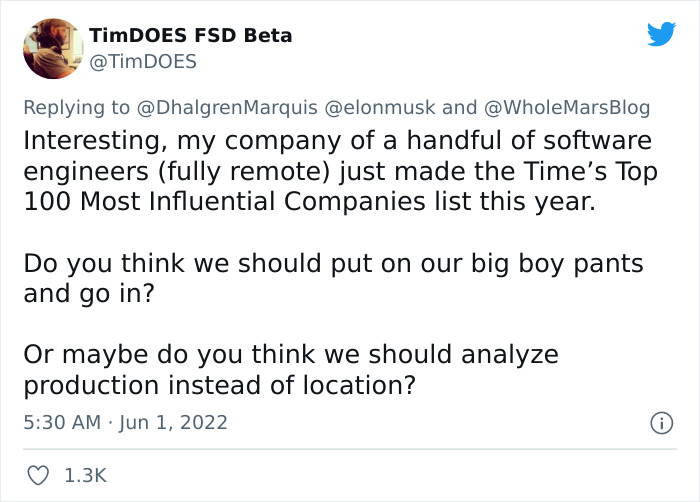 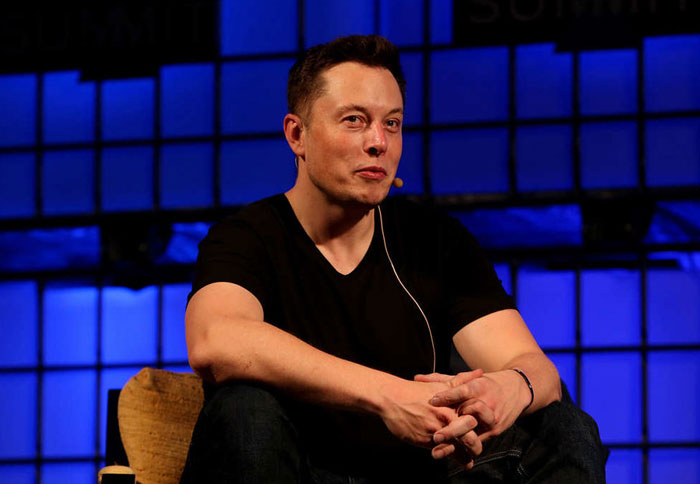 To this, Musk responded with “They should pretend to work somewhere else.” In other words, he made a decision and he’s sticking by it, and if someone has a problem with it, they can appeal, explaining their situation and reasoning for Musk to review, or they can take the high road and resign.

It is important to note that Musk himself did not deny or confirm the legitimacy of these e-mails, but there is reason to believe they are real because of his stance on remote work in general.

In the past, he has spoken out against remote work, in one interview with the Financial Times saying that folks in America are trying to avoid going to work at all, but admiring how Chinese manufacturing workers are working on location and doing a darn good job at it. 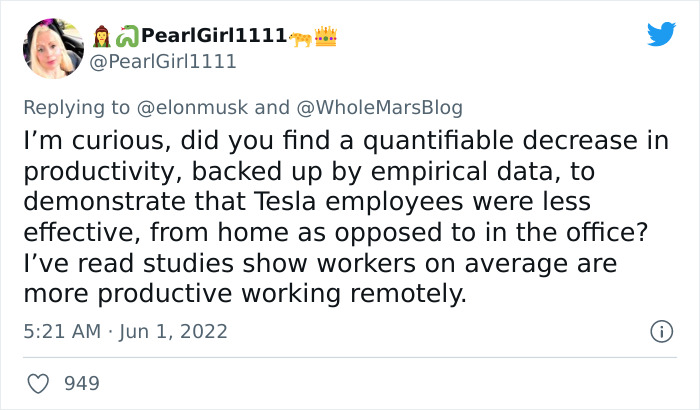 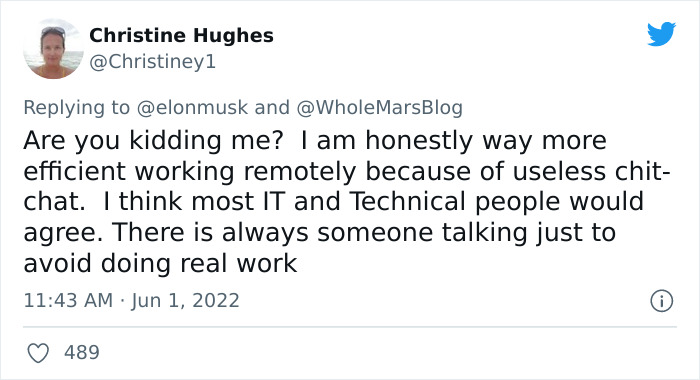 And folks on Twitter had a lot to say about it. The vast majority were in favor of remote work, so they naturally called Musk out on his demand. Besides asking for empirical, number-based proof on how work from the office is better and more productive, there were those who argued that people’s motivation to deliver peak results often stems from their location being offsite rather than on.

Others took a jab at Musk by asking him how he would know if he’s “never run a company.” But all jests aside, folks spoke from their experience in remote work, and claimed that they’ve never felt more productive their entire lives. 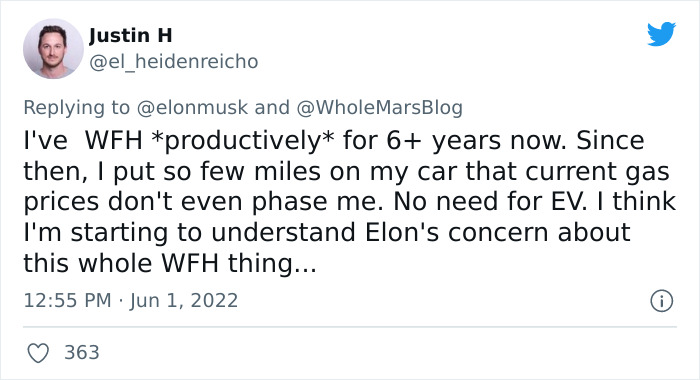 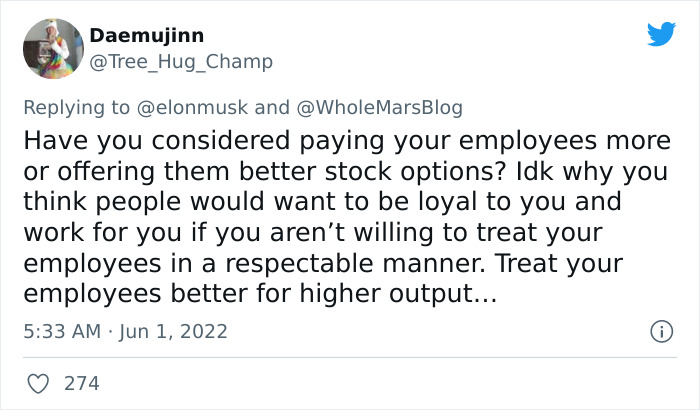 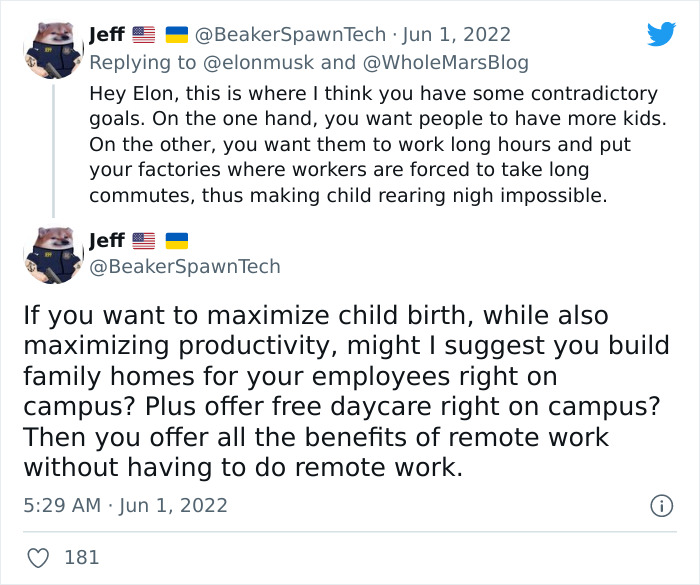 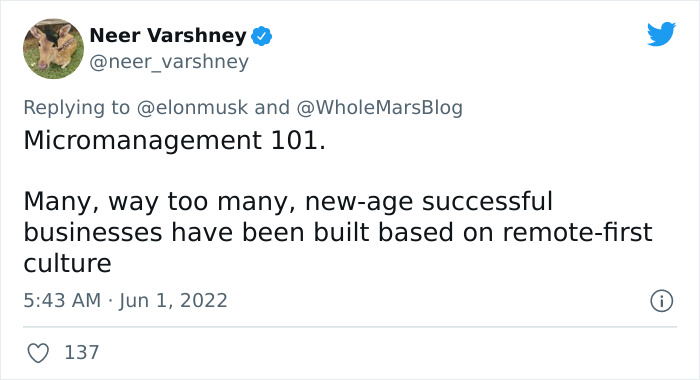 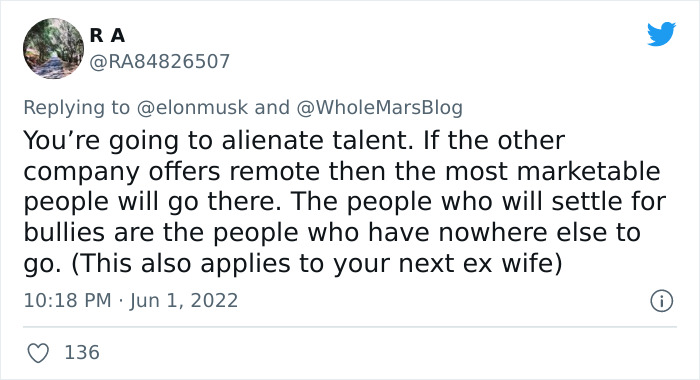 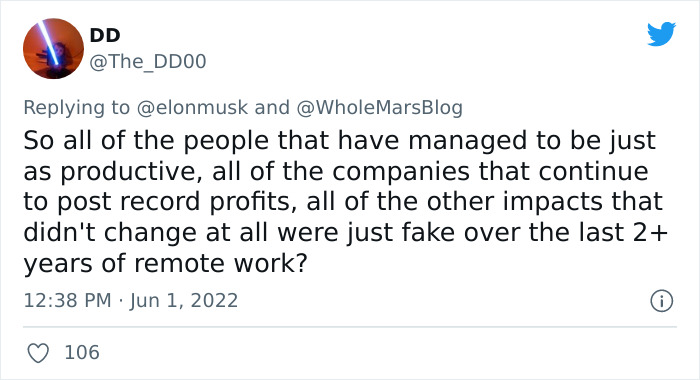 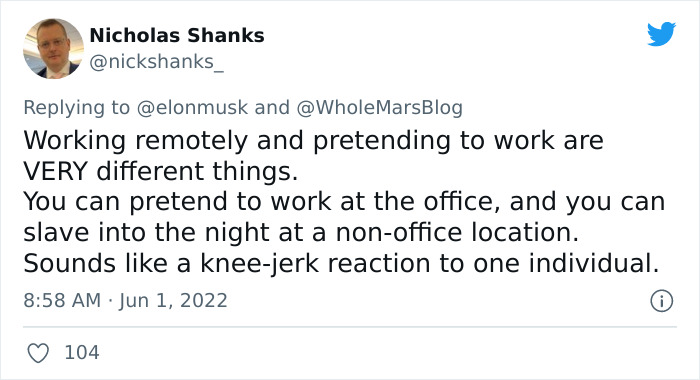 But there was also the other side of the coin—one praising Elon for his decision. Tweeters from this side agreed that engineers need to see leaders working with them, serving as an inspiration and help in understanding how it all works by physically participating in the work.

Others agreed that it’s difficult for engineers to bounce ideas off of each other over the phone. And, if anything, execs quite likely get huge financial rewards for their work, so working from the office should be the least of their concerns.

But there were also those who understood the decision, and even supported it 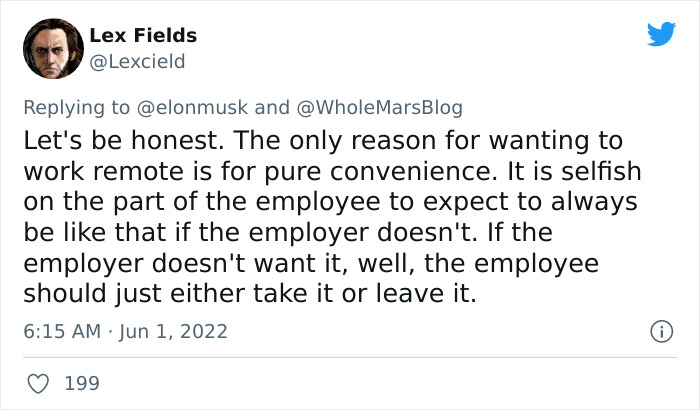 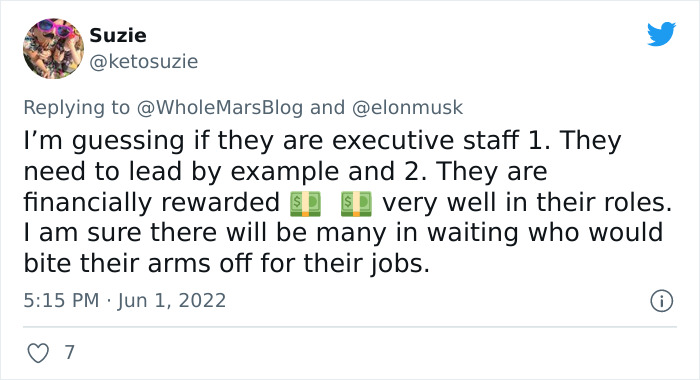 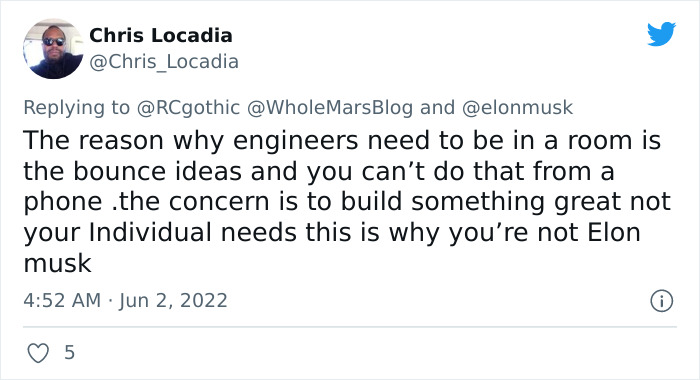 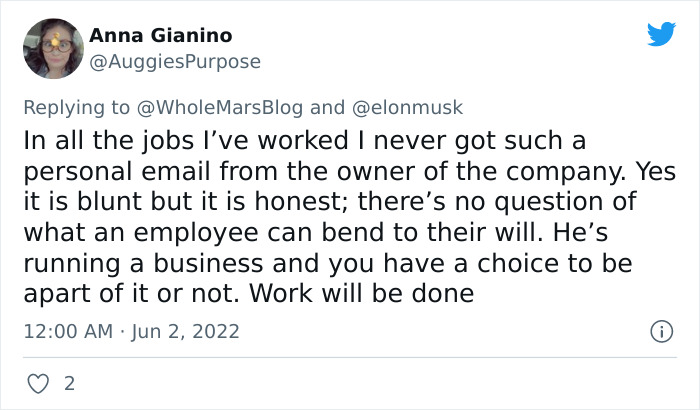 You can check all of this out in context here. But don’t go just yet, as you can still read this other article we covered about him here, where he called Putin to a duel, and of course we’d love to hear your thoughts in the comment section below!

The post Folks Online Are Discussing Elon Musk Declaring That Remote Work Is “No Longer Acceptable” At Tesla first appeared on Bored Panda.