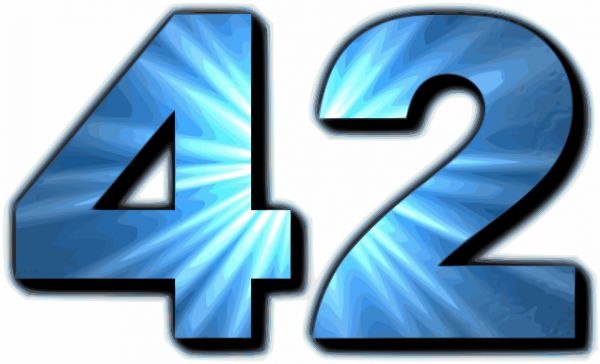 In Douglas Adams’ novel The Hitchhiker’s Guide to the Galaxy, a very powerful computer named Deep Thought is asked the calculate the answer to  “Life, the Universe and Everything.” The answer is 42. Obviously, this is a very important number. Now if we could only figure out why.

Deep Thought takes 7.5 million years to calculate the answer to the ultimate question. The characters tasked with getting that answer are disappointed because it is not very useful. Yet, as the computer points out, the question itself was vaguely formulated. To find the correct statement of the query whose answer is 42, the computer will have to build a new version of itself. That, too, will take time. The new version of the computer is Earth. To find out what happens next, you’ll have to read Adams’s books.

The author’s choice of the number 42 has become a fixture of geek culture. It’s at the origin of a multitude of jokes and winks exchanged between initiates. If, for example, you ask your search engine variations of the question “What is the answer to everything?” it will most likely answer “42.” Try it in French or German. You’ll often get the same answer whether you use Google, Qwant, Wolfram Alpha (which specializes in calculating mathematical problems) or the chat bot Web app Cleverbot.

Adams has declared that the number 42 was a joke, a relatively small but meaningless number. Yet we see it everywhere, and not just because of the Hitchhiker’s Guide. Find out how important the number 42 has always been at Scientific American. Warning: the article gets geekier and geekier as it goes along. -via Boing Boing