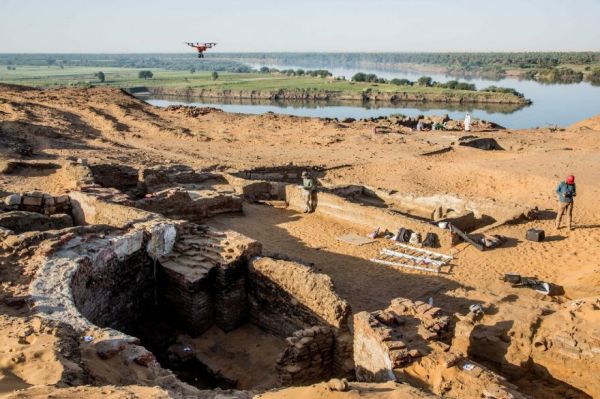 The medieval kingdom of Makuria ranged over parts of what is now Sudan and Egypt. Its capital was Dongola, a Sudanese site on the Nile River where archaeologists have been digging since the 1960s. They previously found a church, and expected to find a town square as well. However, the massive structure they uncovered appears to be a much-larger cathedral.

Archaeologists from the University of Warsaw’s Polish Centre of Mediterranean Archaeology (PCMA) believe they have found two walls of the church’s apse, painted portraits of the Twelve Apostles, and the domed covering of a tomb. Artur Obłuski, director of the PCMA, told The Art Newspaper that the tomb could be the resting place of a powerful archbishop from Nubia’s Christian period, which ran approximately from the 6th century to the 14th century. That theory is based on the layout of another ancient church found in Sudan in the 1960s, just west of a bishop’s domed tomb.

At its height, Dongola was about the size of Paris today, so it only makes sense that they would have a large cathedral. Read about the discovery and the kingdom of Makuria at Atlas Obscura.