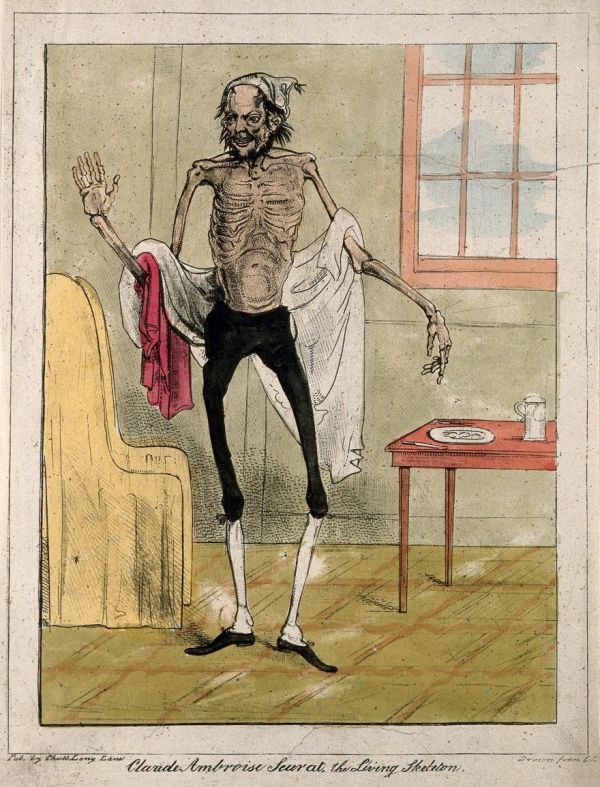 Claude Ambroise Seurat was a French man who was exhibited in traveling freak shows as the Living Skeleton. Born in 1797 or 1798, he appeared to be a normal baby, but as he grew, his body wasted away. As an adult, he was said to be 5′ 7″ tall and weighed only 78 pounds! Seurat became rather famous for his appearance, and drew scrutiny of the French medical community. It became obvious to anyone who observed Seurat over time that his skeletal body size was due to the fact that he ate very little. But why was that?

Seurat’s bones had several deformities. His chest was sunken, his shoulder blades protruded from his back, and his neck was very short. These deformities could have caused him difficulty in eating, and at least one doctor noticed that he cut his food into tiny pieces, chewed it for a very long time, and swallowed small amounts. This points to a restriction or weakness in the esophagus or other parts of the digestive system, and could explain his extremely low weight. The real mystery is how he functioned in such an emaciated state. Seurat’s father was offered cash for his remains should Seurat die, but he declined all offers. We don’t know how long Seurat lived, or what happened to his body afterward. Read the story of France’s Living Skeleton at Amusing Planet.