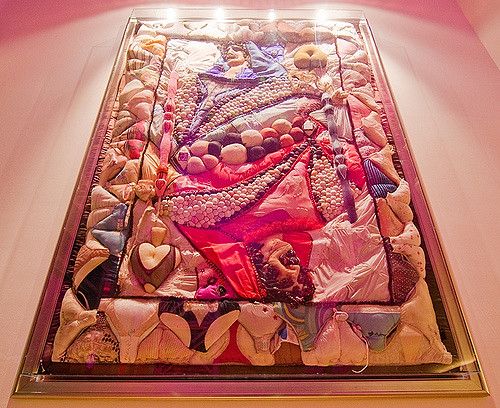 Frank Zappa’s 1981 tour featured a musical sequence called “Panty Rap” that you don’t want your boss to hear at the workplace, due to the subject matter. He encouraged women to throw their underpants on stage. Many women responded, and bras were often thrown, too. After the tour was over, he commissioned this quilt made of the collected underwear. Emily Alana James is the artist who converted the clothing into a quilt. She tells us about the quilt project in this interview.

I was introduced to Frank only because I sent in the message through my friend that I wanted to do the quilt. He would have said yes to anyone who asked. He couldn’t have cared less how it turned out, only that he followed through on what he said he would do. After all he told fans to bring underwear and he would have it made into a quilt. He told me he had intended to visit a local college in hope of finding someone. I saved him the trouble, that’s all.

Look closely, and you’ll see that the pattern is the queen of spades with Zappa’s face.

The finished artwork now hangs in the Hard Rock cafe in Biloxi, Mississippi. -via Bits and Pieces