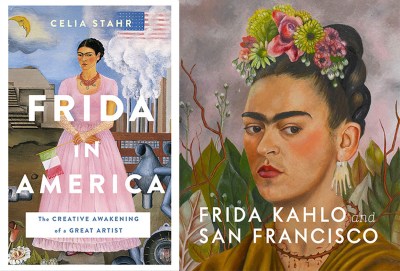 Few women artists have used their own face and wardrobe in their work as extensively as Frida Kahlo. Two recent publications—Frida in America: The Creative Awakening of a Great Artist, by Celia Stahr, and Frida Kahlo and San Francisco, by Circe Henestrosa and Gannit Ankori—emphasize that Frida treated clothing as an artistic palette and her way of dressing as continuous with the self-portraits she painted. A child of the Mexican Revolution and a proud exemplar of mexicanidad, she dressed as a freelance ambassador abroad, often turning potentially condescending response into respectful wonder. She did the same with her disability. What for others might have been a mortifying lameness and barrenness, Frida transformed into a compelling source of art. She embellished her orthopedic corsets and shoes like canvases, and portrayed her miscarriages as richly provocative dreams. She modeled identity politics as art, which is part of what has made her an icon. 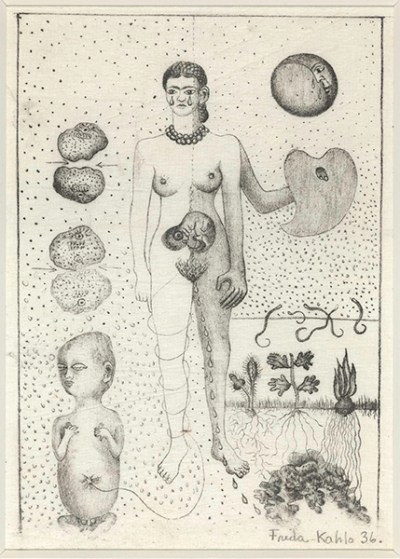 Stahr’s primary goal is to show that Frida’s “creative awakening” occurred in the United States, where she formed key relationships and made some of her most important work. Among the most nuanced passages are those about Frida’s intense personal relationships with Georgia O’Keeffe and Rivera’s studio assistant, Lucienne Bloch; we feel what it would have been like to know Frida. While many biographies lack a dramatic narrative arc because the lives of most people merely ebb and flow, Stahr convincingly portrays Frida’s 1938 show at Julien Levy Gallery in New York as a career crescendo. Frida becomes the artist and woman she set out to be, overcoming numerous obstacles, not least the emotional turmoil of her open marriage.

Stahr applies a slightly fictionalized style to the story of Frida’s life. Her description of Diego and Frida’s arrival by train in San Francisco, for example, unfolds like a scene in a novel, with special attention to the heroine’s attire: “She wears a distinctive short jacket with two large hombrera-like shoulder flaps—à la matador—over a long dark skirt. In her hand she holds a beret.” Earlier in the same scene, Stahr crosses the line from evocation to speculation: “the observant Frida scanned the crowd like a cat wary of possible predators.” While contemporaneous accounts of Frida’s manner tend to justify this characterization, it is still a hypothetical leap. Yet, as storytelling, it works. Using such gambits, together with cleverly inserted quotes from local newspapers and excerpts from numerous letters from Frida to her mother, Stahr consistently evokes the feel of Frida’s days and relationships. We dwell in the narrative in a way we don’t in Herrera’s or Ankori’s. 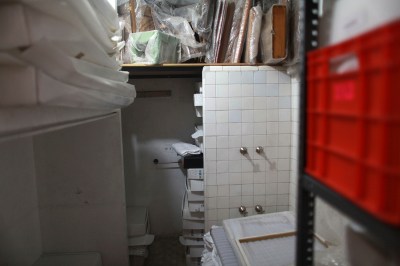 A bathroom turned storage room at the Frida Kahlo Museum in Mexico City where many of Kahlo’s clothes were found.

The publication of Frida Kahlo and San Francisco coincides with “Frida Kahlo: Appearances Can Be Deceiving,” an exhibition (currently viewable, through July 27, online only due to the pandemic) at the city’s de Young museum. Organized by fashion curator Circe Henestrosa at the Museo Frida Kahlo in Mexico City in 2012, the show centers on clothing and personal items recovered in 2004, with the reopening of a locked bathroom at Frida’s beloved home, the Casa Azul. Upon her death in 1954, Rivera had filled the room with her belongings and ordered it closed. For the current book, Henestrosa emphasizes the importance of dress to Frida, citing testimonies such as Carlos Fuentes’s dazzling description of her arrival at a concert in the Palacio de Bellas Artes in Mexico City.¹ Gannit Ankori wrote the San Francisco supplement, focusing on Frida and Diego’s time in the city at the beginning of the 1930s and their brief return ten years later, when they remarried there after a brief divorce.

Ankori essentially repurposed the pertinent pages of her Kahlo biography for the new volume. She succinctly covers Frida’s key San Francisco experiences, including her delight in Chinatown; her friendship with Leo Eloesser (a physician who treated her for pain and became a trusted medical adviser); her painting showing horticulturist Luther Burbank, famed for his hybrids and his defense of evolutionary science, as both a rotting corpse and a living tree/man; and her posing for Edward Weston. Ankori’s essay draws heavily on the accounts of John M. Weatherwax, who wrote several stories and an unpublished play about the woman he dubbed the “Queen of Montgomery Street.”² In one instance, he recounts Diego’s reaction to a portrait Frida was painting: “The King and Queen go to [a] gigantic easel. Don Diego looks long and soberly at his wife’s work. ‘Bueno,’ he says. After a while he adds in Spanish: ‘A pure and strong young woman’s spirit is as precious as the light of the stars.’” 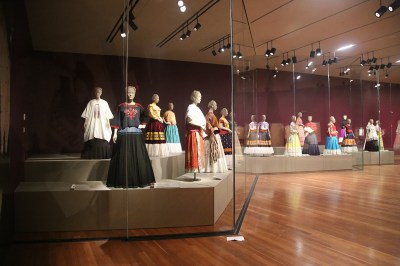 Mannequins on view in the exhibition “Frida Kahlo: Appearances Can Be Deceiving,” 2020.

The “Gallery” section of the book features photographs of Frida at various stages of her life, along with artifacts including clothing, body casts, orthopedic shoes, hair ornaments, jewelry, and artworks. Colorful Indigenous outfits are juxtaposed with paintings or photographs of the artist wearing the very same array. These images inevitably recall fashion magazine articles in which garments are matched with the “right” earrings, sunglasses, necklace, and lipstick. In the book, Frida, through the medium of a curator, seems to give advice on how to style as she did.

Frida’s self-adornment should be a viable topic for study, but the visual conventions of celebrity fashion coverage overwhelm this specific attempt. It’s a sad twist that Frida’s strategy of drawing attention to her art by constructing a unique artist persona now shifts our attention away from her work. What was once a political act—dressing like an Indigenous woman—today leads straight to the museum gift shop. 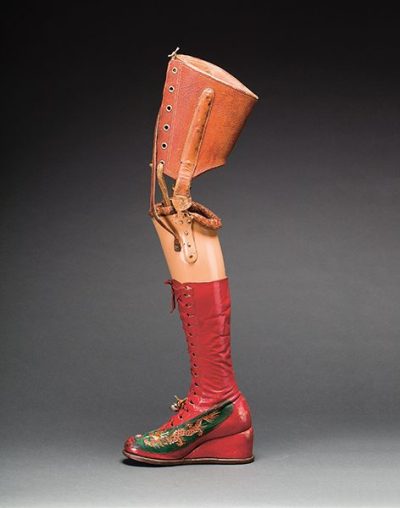 Prosthetic leg with a leather boot.

It was not always this way. When Frida’s art burst upon the US museum scene in the late 1970s, she still had the aura of difference. Her eccentricity, agonizing physical challenges, and unconventional love life had a certain shock value, but the novel and fascinating paintings were the focus. And she was a gateway drug, leading viewers onward to José Guadalupe Posada, or David Alfaro Siqueiros, or Leonora Carrington, or the French Surrealists. One possible raison d’être for shows like “Frida Kahlo: Appearances Can Be Deceiving,” or the New York Botanical Garden’s fannish “Frida Kahlo: Art, Garden, Life” (2015), may be that they open that path for a new generation, one accustomed to the lingua franca of celebrity fashion.