New York City may be home to the world’s premier museums and galleries, but many of the most celebrated and experimental artworks memorably shown in the city debuted outside the walls of those spaces. From the 1960s to the present, public art in New York has undergone huge changes and reinventions by artists, with pieces evolving from interventions in abandoned warehouses to multi-location installations. To trace the history of some of the most important public artworks in the city’s recent history, ARTnews spoke to Nicholas Baume, director and chief curator of the Public Art Fund, and Micaela Martegani, executive director and chief curator of the nonprofit More Art. Their insights on standout works over the years follow below.

1960s
Baume told ARTnews that the period between the 1960s and the present involved a “series of radical changes” for public art. The field, which had been historically dominated by state-sanctioned monuments, was rejected by the avant-garde, Baume said, and “in doing so fundamentally reinvented what we even think of as being public art.” One pivotal example of this transformation is the 1967 “Sculpture in Environment” exhibition in New York, which was organized by the city’s parks department and curated by Doris Freedman, who served as director of cultural affairs and later founded the Public Art Fund in 1977. The show featured, among other pieces, artist Tony Rosenthal’s cube-shaped sculpture Alamo, now displayed at Astor Place. It was “a very radical and progressive early example of rethinking what it means to create public art in the context of urban space,” Baume said, adding that Claes Oldenburg’s contribution to the exhibition, a dug-up and refilled hole in Central Park titled Placid Civic Monument, represented the ways that “the ambitions of artists stretched beyond the museum walls, and even the way they thought about making art stretched beyond their own studios.” 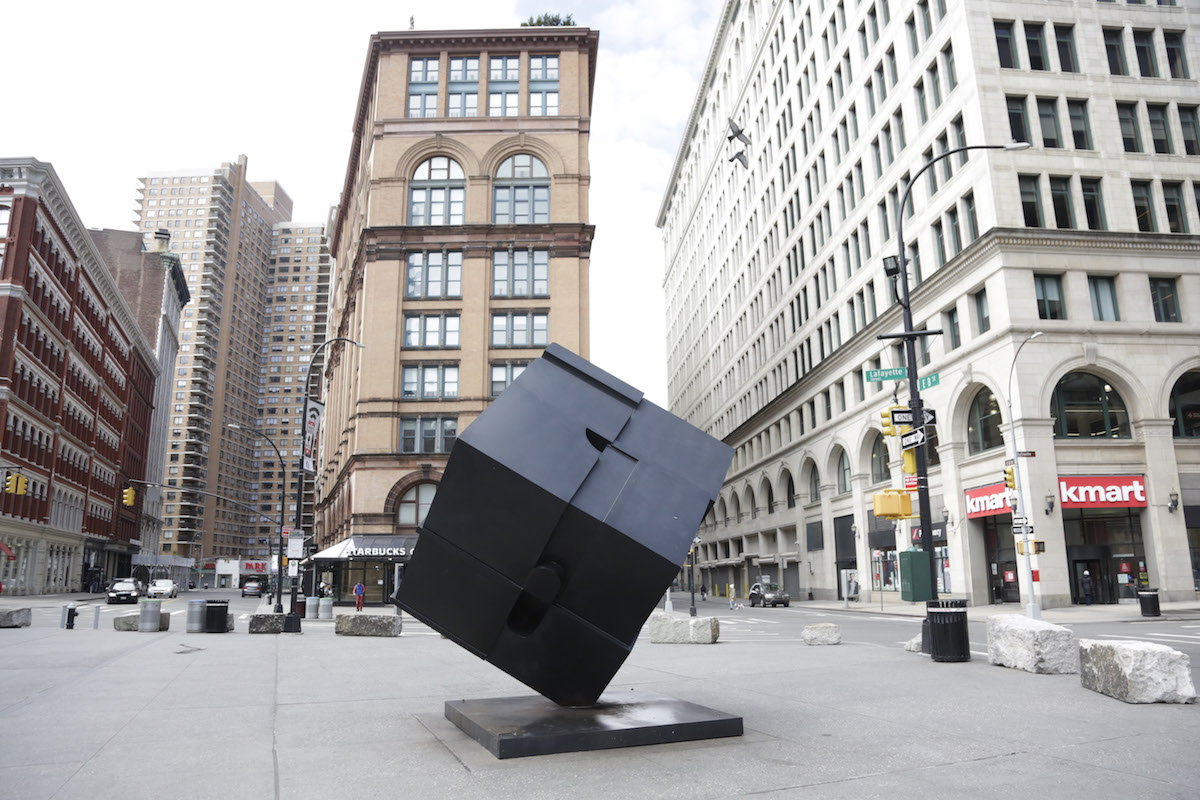 1970s
Baume considers the 1970s one of the most exciting periods for public art around the world. Artists were “just going for it,” without any kind of official authorization, he said, and in New York they were often utilizing defunct or abandoned spaces. Gordon Matta-Clark’s Days End (1975), for which the artist cut gigantic holes into the walls of a warehouse on Pier 52 in New York, was one of the most significant public works of the decade, according to Baume. The audience for the work was, in part, members of the LGBT community who cruised at the Chelsea piers. 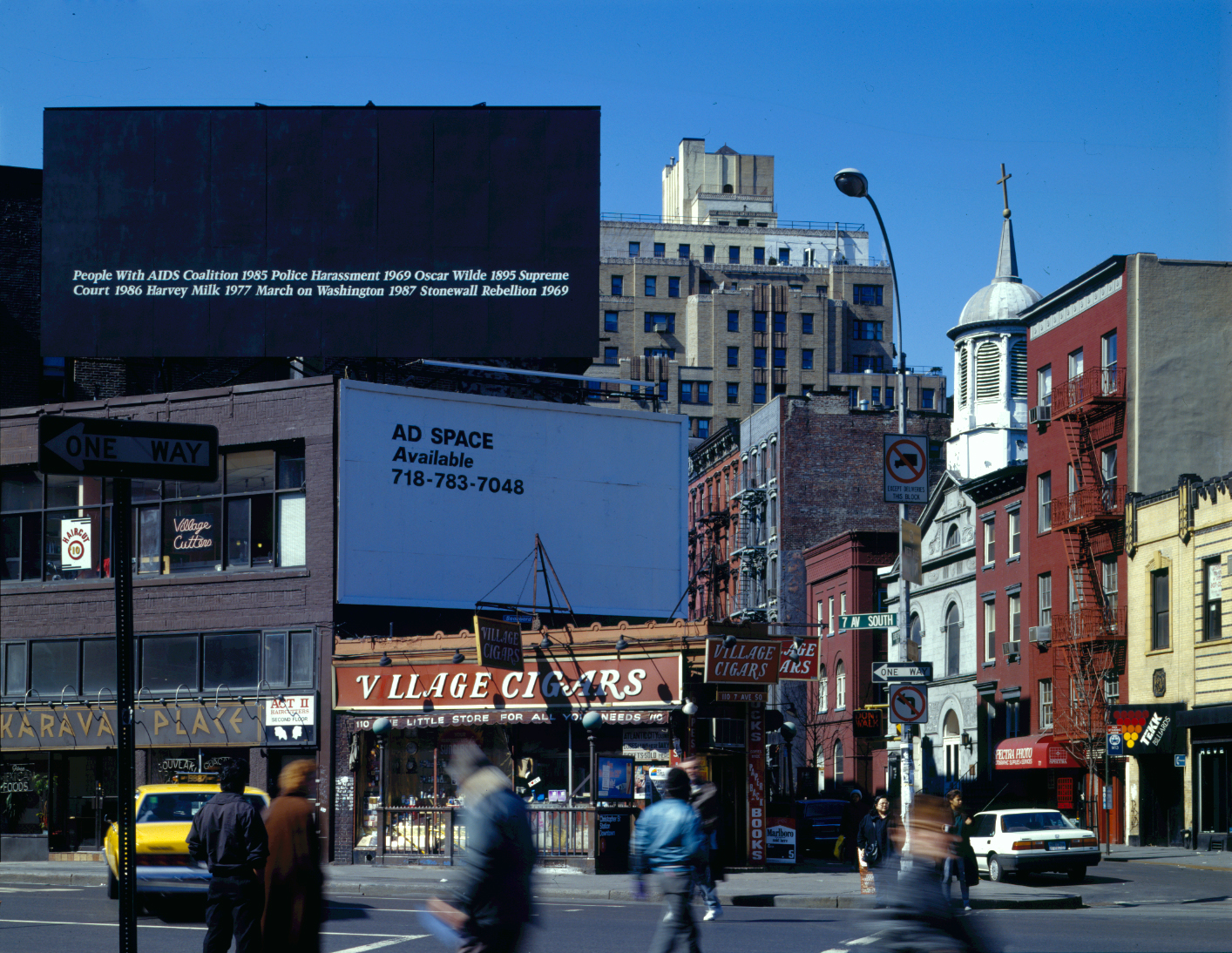 1980s
The 1980s saw one of the Public Art Fund’s “seminal series,” as Baume put it, with “Messages to the Public.” Throughout the decade, artists including Barbara Kruger, the Guerrilla Girls, David Wojnarowicz, Adrian Piper, Jenny Holzer, Keith Haring, Martha Rosler, Richard Prince, Alfredo Jaar, and others projected digital messages and images on a LED screen in Times Square. Many of their works addressed social and political issues of the time. Baume said that public art in the 1980s was marked by a “a broader embrace of work that was engaging very directly with significant social issues.”

One such work, Felix Gonzalez-Torres’s Untitled (1989), went on view in Sheridan Square opposite the Stonewall Inn on the 20th anniversary of the Stonewall uprising. Untitled is a black billboard with with white text that reads: “People With AIDS Coalition 1985 Police Harassment 1969 Oscar Wilde 1895 Supreme Court 1986 Harvey Milk 1977 March on Washington 1987 Stonewall Rebellion 1969.” The work was later reinstalled in 1999 and 2019. 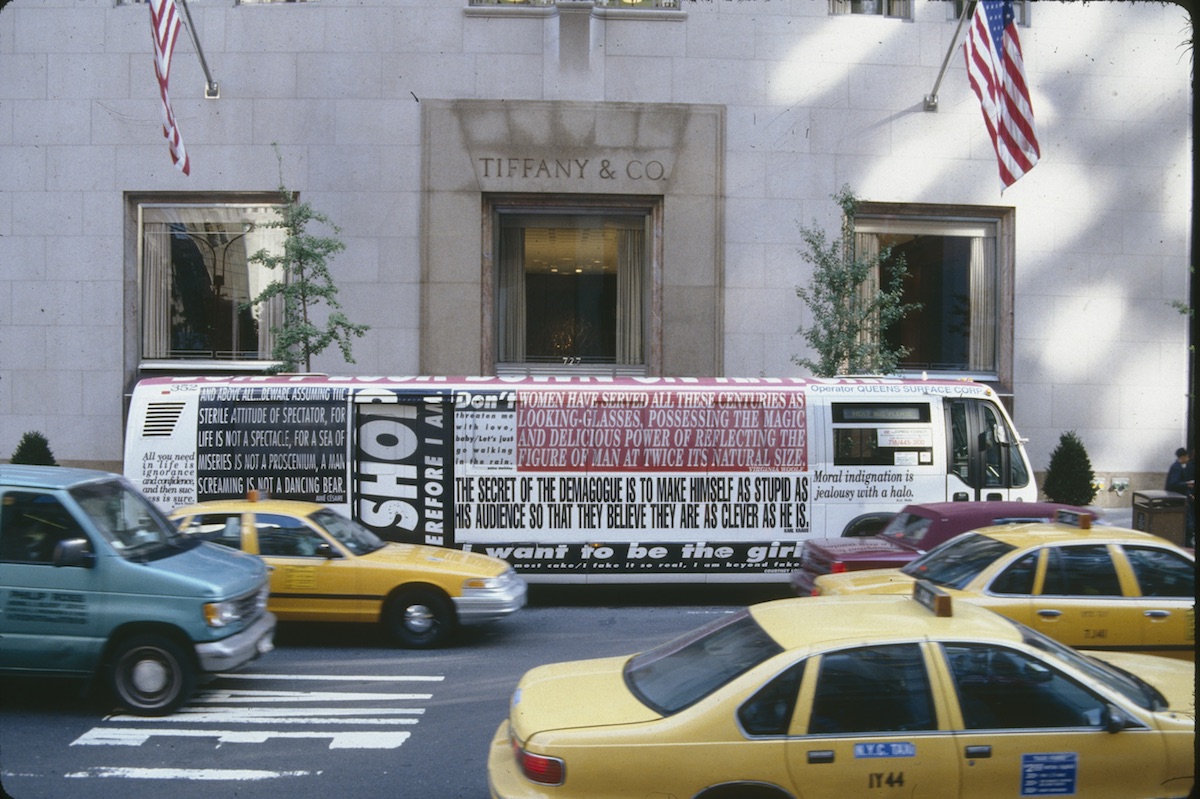 1990s
The use of advertising platforms as vehicles for public artworks continued into the 1990s, a decade in which “you see a continuation of that strand of social engagement” and an “increasing diversity of artists having a platform in public space,” Baume said. Some of the Public Art Fund’s standout projects from this period were Barbara Kruger’s Bus (1997), for which the artist covered a 40-foot-long functional bus with text; Melvin Edwards’s stainless steel sculpture Tomorrow’s Wind (1991) in Doris Freedman Plaza; and Rachel Whiteread‘s Water Tower (1998), a resin cast of a monumental water tower installed on a roof in SoHo and now part of the collection of the Museum of Modern Art. This period, according to Baume, was marked by the emergence of “some really powerful female voices” in the field of large-scale public sculpture, which had “traditionally been associated with male artists.” 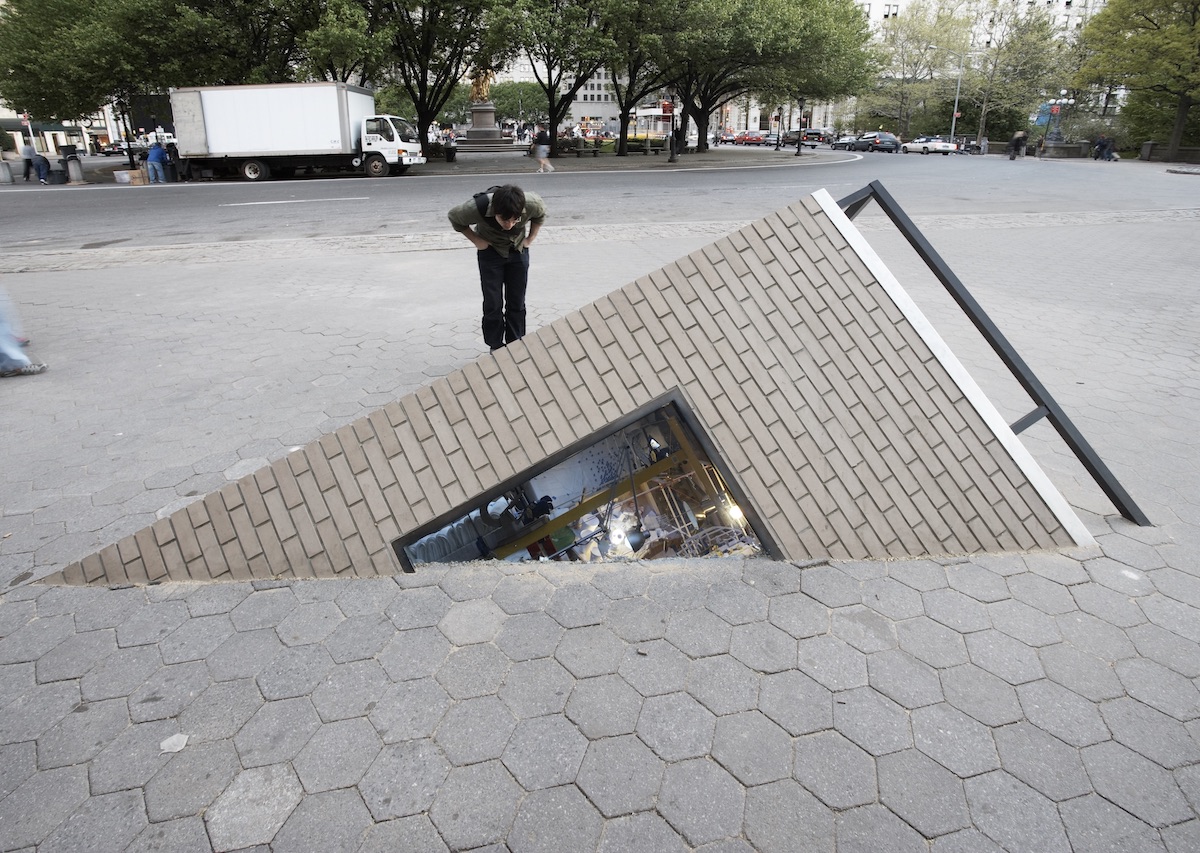 2000s
Monumental sculptures proliferated in the aughts, with blockbuster works by Jeff Koons and Louise Bourgeois presented by the Public Art Fund at Rockefeller Center. Other big projects from the organization included Sarah Sze’s Corner Plot (2006), an installation of a building swallowed by the earth in Doris Freedman Plaza, and Olafur Eliasson’s The New York City Waterfalls (2008), four manmade waterfalls shown in four locations across the city that “engaged with the environment in a completely different way,” Baume said. Another major project of the decade—not presented by the Public Art Fund—was Christo and Jeanne-Claude’s The Gates, which comprised 7,503 fabric panels set up throughout Central Park in 2005. It was in this decade, according to Baume, that there was—by way of media coverage and institutional support—a creation of an audience for public art projects in New York. “The presence of these things and these institutions has also given people an education and a background and an expectation that this is a part of what the fabric of New York City is about,” Baume said, speaking of the city’s “rich cultural landscape that the artists are inventing and reinventing all the time.” 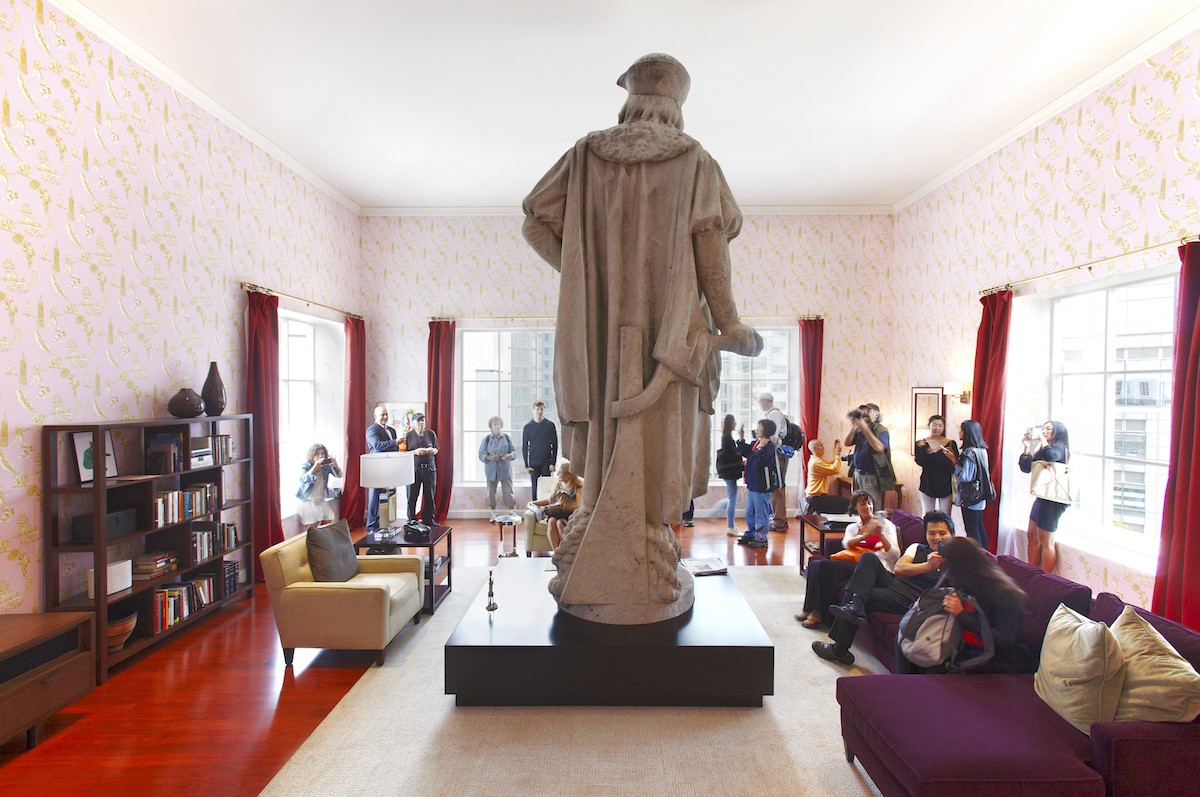 2010s
In more recent years, it’s become “an assumption that any major new civic spaces, parks, public infrastructure should have public art,” Baume said. Governor’s Island, the High Line, Brooklyn Bridge Park, and more places and organizations in New York now regularly present exhibitions to the public, which, Baume explained, represents “a totally different mindset” from the “unauthorized” projects of the 1960s and 1970s. “All of these spaces are sort of inconceivable without a public art element being really integral,” he said. “It’s a real index of the kind of huge evolution in the civic recognition of the value and role of public art.” 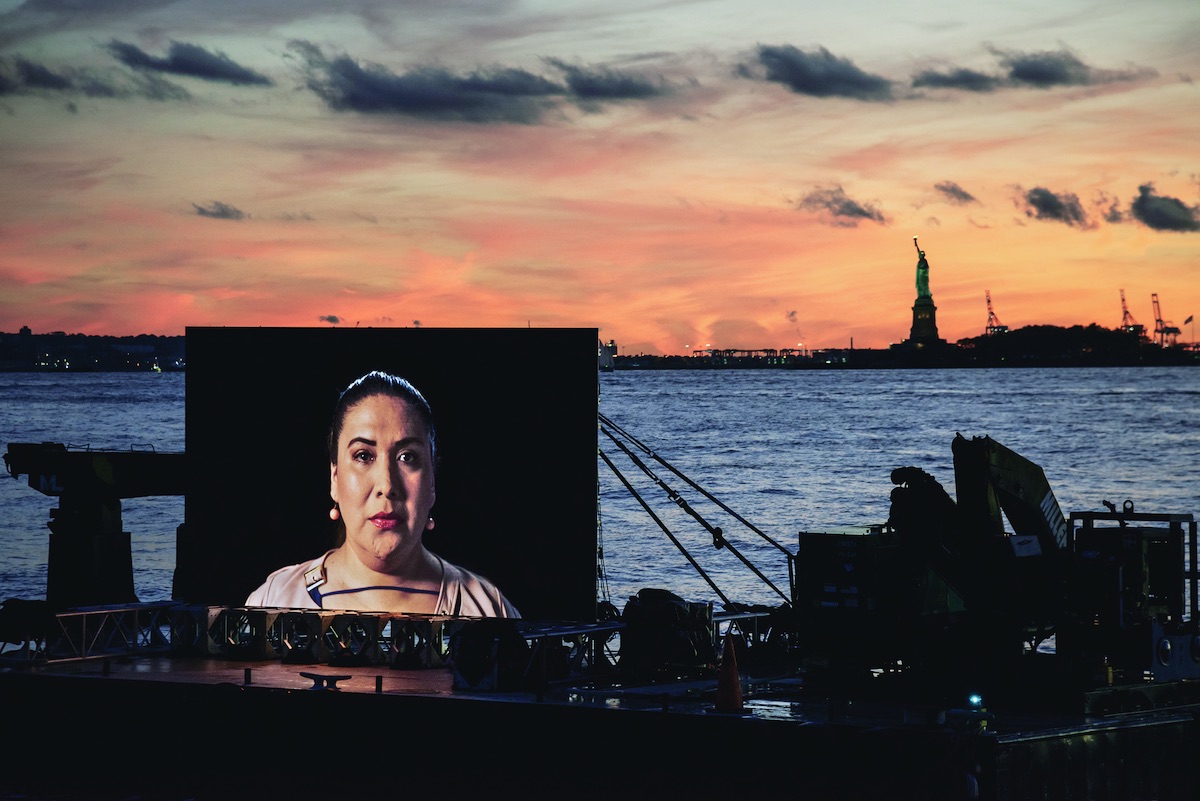 For Baume, some of the Public Art Fund’s most significant projects of the last decade are Tatzu Nishi’s immersive intervention Discovering Columbus in 2012, Ai Weiwei’s 2017 project Good Fences Make Good Neighbors, a 2011 survey of Sol LeWitt’s structures, and a 2019 exhibition of Siah Armajani’s Bridge Over Tree architectural structure. Among the most popular and acclaimed public artworks of the 2010s was Kara Walker’s monumental 2014 sculpture A Subtlety, which was presented by the nonprofit Creative Time at the Domino Sugar Factory in Brooklyn.

In an interview with ARTnews, Martegani recalled some of More Art’s most significant commissions over the last 10 years. One of the most resonant projects was Dread Scott’s 2014 performance On the Impossibility of Freedom in a Country Founded on Slavery and Genocide in Dumbo. For the piece, which was captured in photographs and video footage, the artist attempted to walk against the force of a fire hose for 15 minutes. This “battle” between the artist and the hose, as Martegani put it, was anchored in events of the civil rights movement and police brutality in America, but it also “transcended what happened historically and it was about discrimination in general.” The work became the subject of program at a Brooklyn school whose students attended the performance. 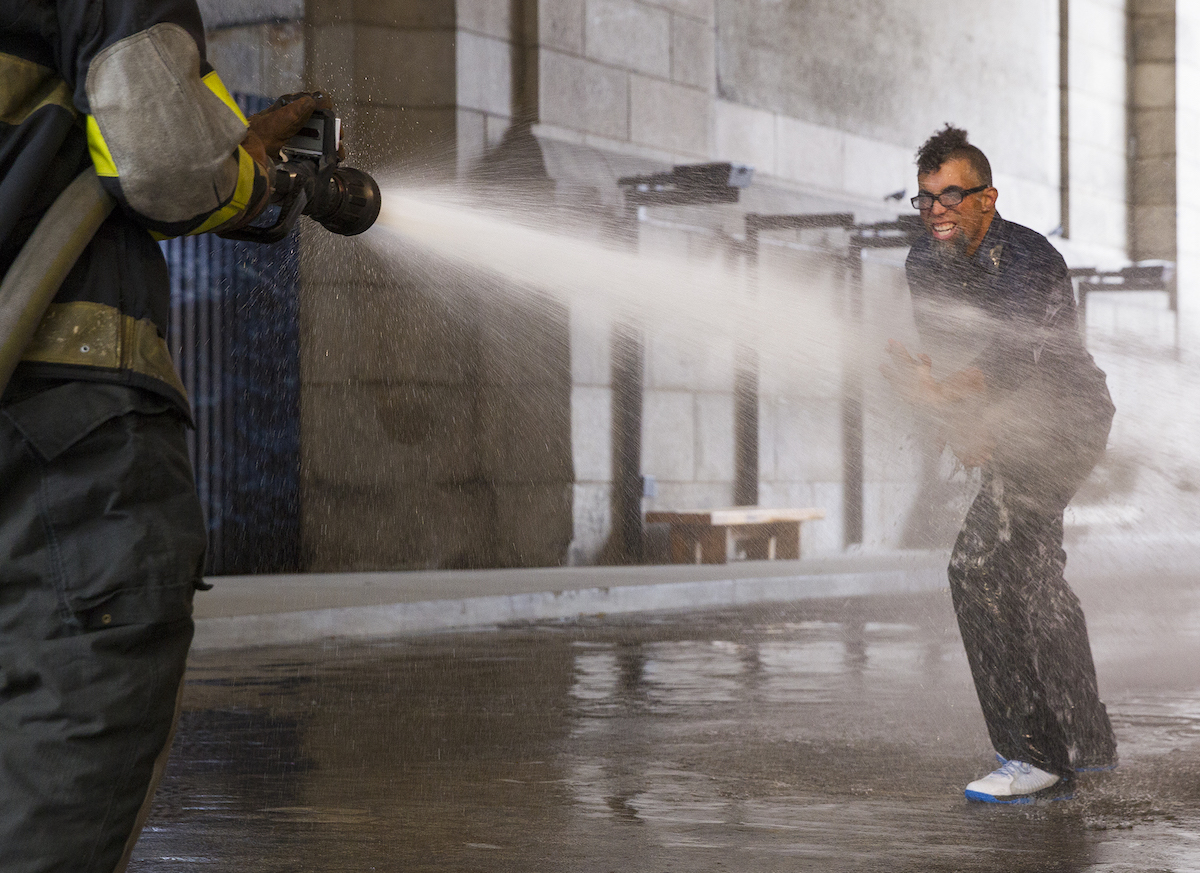 Dread Scott, On the Impossibility of Freedom in a Country Founded on Slavery and Genocide, 2014.

Among other major pieces presented by More Art were Krzysztof Wodiczko’s 2012 Abraham Lincoln: War Veteran Project, an installation in Union Square focused on the psychological and emotional tolls of conflict; Andrea Mastrovito’s 2017 film project NYsferatu, which examined xenophobia through the lens of Bram Stoker’s Dracula story; and Shimon Attie’s 2018 silent film Night Watch, which foregrounded the experiences of asylum seekers in New York and was screened on a barge moving through the Hudson River, East River, and shores in the five boroughs. Martegani said that the power of Night Watch, like other public art projects, lies in its production of a “beautiful and poetic result about something that is incredibly raw.”