Downtown San Diego goes all in when it comes to celebrating SDCC and welcoming its over 130,000 attendees. Restaurants and bars are no exception to the rule and throughout the area, chefs and bartenders whip up brilliant new concoctions based on fan favorites like Wonder Woman, Game of Thrones and even My Little Ponies. Whether you’re going to the convention or just want to make some fun geeky food at home, you’ll want to see all the fun foods and beverages available for sale only during Comic Con weekend. 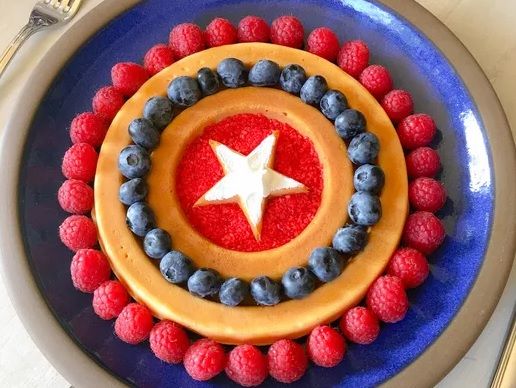 Always a popular Downtown breakfast spot, Cafe 22’s specialty of the month is a waffle shaped just like Captain America’s shield and adorned in the red, white and blue of raspberries, whipped cream and blueberries. It’s a heroic way to start your day. 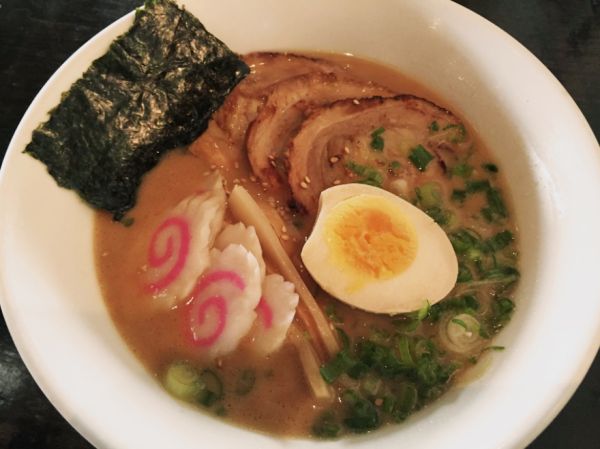 Naruto fans know that the show’s main character has a soft spot for some good ramen from the Ichi Raku ramen restaurant. He also has a particular list of favorite ingredients including pork chashu, Japanese seaweed, green onions, half an egg, bamboo shoots and naruto fish paste cakes (that’s the real name unrelated to the character). While local ramen shop Tajima’s usual miso ramen always contains pork chashu, Japanese seaweed, green onions and egg, their special Naruto ramen is only available during Comic Con and has the bamboo and naruto additions to make it perfect for visiting anime fans. 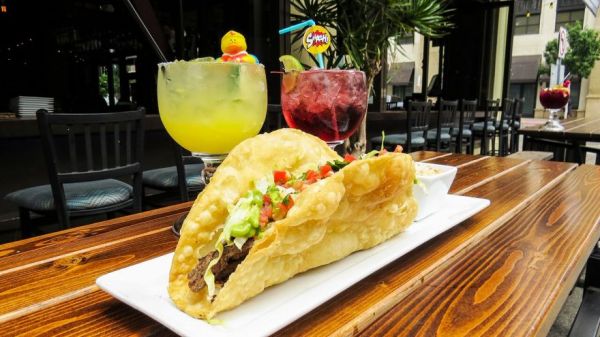 One of the busiest Mexican restaurants Downtown, the Blind Burro modified a few of their regular items to be particularly super -like the 10″ long Super Tacos available in carne asada or pollo varieties, or the Giganto Dog which could go quite far in filling up the monster it was named for with an all beef frank topped with candied chipotle bacon, pinto puree, charred green onions, pico de gallo, pickled jalapeño puree, mayonnaise and mustard. Even the most popular appetizer on the menu, the classic guacamole, was given a name to suit the occasion as it has been retitled Kryptonite for the weekend.

The Burro didn’t leave their cocktail menu behind either, sprucing up their usual house margarita, border mule and paloma tradicional with Milagro Silver and fun adornments, and redubbing them the Mega Margarita, the Pop Bam Slam Mule and the Marvel-ous Paloma. 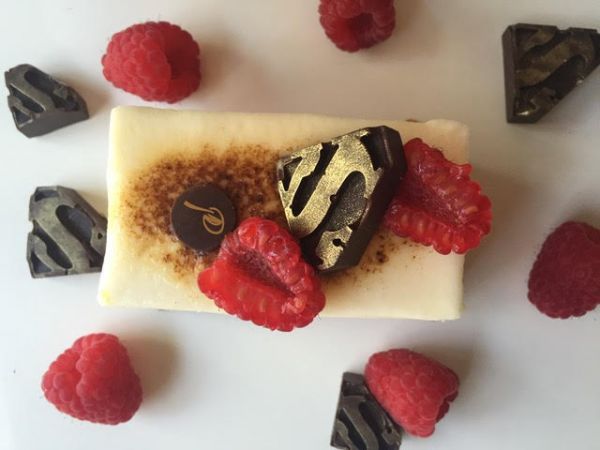 Rather than taking the time to introduce all new dishes just for the weekend, Le Parfait Paris decided to make all the items on their regular menu a little more super. How, you might ask? By adding superhero-shaped chocolate pieces to them all, of course! Besides Superman, there are also Batman, Spider-Man and Iron Man chocolates available. 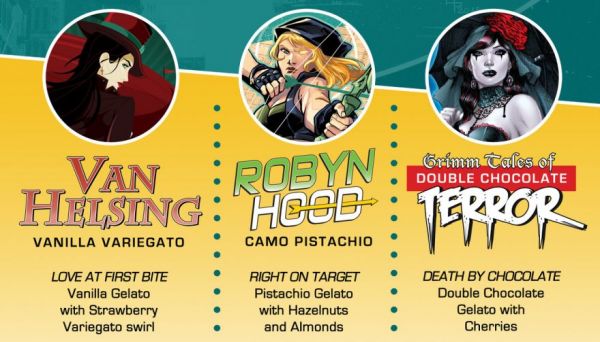 While the rest of the bars and restaurants on this list have merely taken inspiration from their favorite comic books, movies and tv shows, Gelato Paradiso actually partnered with Zenescope Entertainment to release three specialty gelato flavors based on characters from the company’s comic book characters. The Van Helsing Vanilla Variegato features vanilla gelato with a strawberry variegato swirl; the Robyn Hood Camo Pistachio is a pistachio gelato gone nuts with hazelnuts and almonds; and the Grimm Tales of Double Chocolate Terror is made with a double chocolate gelato and cherries.

Are you unable to stop eating gelato once you start? Then you’ll want to head to the Zenescope booth at the convention before noon on Saturday to register for their gelato eating contest held on Saturday at 3 PM. The winner of the contest will receive a four day pass for next year’s Comic Con as well as a best of Zenescope goodie pack and all entrants will also be entered to win one of three sets of PlayStation VR goggles. 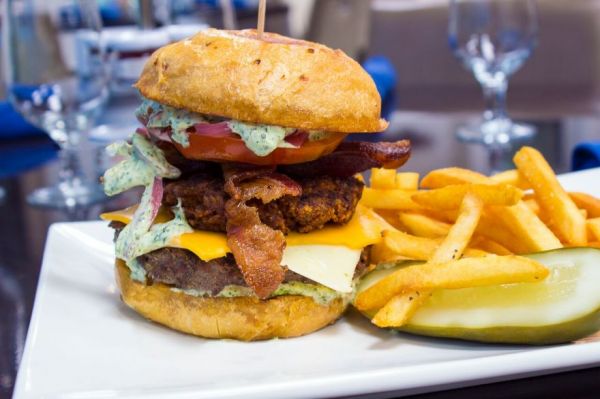 Three different properties inside the Manchester Grand Hyatt will be offering specialty food and drinks to celebrate the convention located right next door. The Grand Lobby Bar will be serving up burgers inspired by Drax of Guardian’s of the Galaxy that are made up of angus beef, a chorizo patty, bacon, pepper jack cheese, cheddar cheese, pickled onion, sliced tomato, cilantro aioli all on a sun dried tomato bun. With so many protein sources and a lot of heat, it certainly seems like something Drax would enjoy. 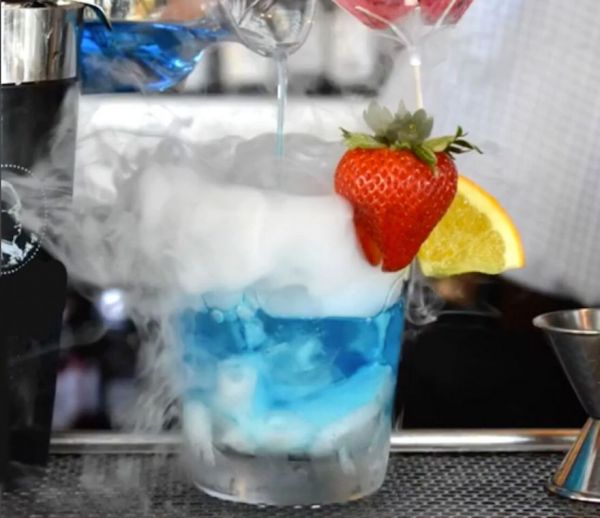 Meanwhile, Sally’s Fish House and Bar will offer a their usual sushi menu served up with optional light saber chopsticks and a variety of cocktails inspired by comics and Game of Thrones. The Wonder Woman will feature blueberry vodka and lime muddled with mint and blueberries; the Deadpool will get you cucumber vodka and Bloody Mary mix topped with celery, pepperoncini, blackened shrimp, bacon, olive and lime; the Hulk is a green concoction made with tequila, spinach, lime, lemon, agave nectar and white grape juice blended together; and finally, the White Walker (pictured) is made up of white rum, coconut rum, pineapple juice, Tuaca and blue Curaçao. 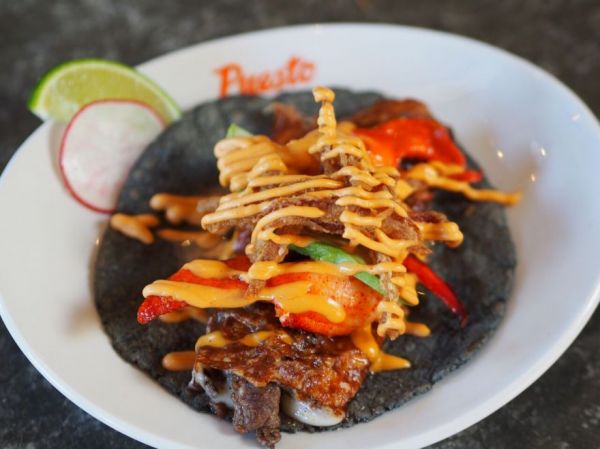 Also inside the Hyatt, Gourmet Mexican restaurant Puesto invites you to choose whether you’d like to fight on the side of good or evil with their El Heroe Taco (pictured), filled with fillet mignon, crispy melted cheese, Maine lobster claws, avocado, crispy onions and a special heroe sauce, or the Villain Taco that contains carne asada, crispy melted cheese, pork adobo, avocado, crispy onions, cucumber crema and cilantro. My suggestion, get one of each and be an anti-hero and then follow that deliciousness with The Love Interest, a rich Mexican crema pana cotta with passion fruit, prickly pear, lime and blueberry gelatina. 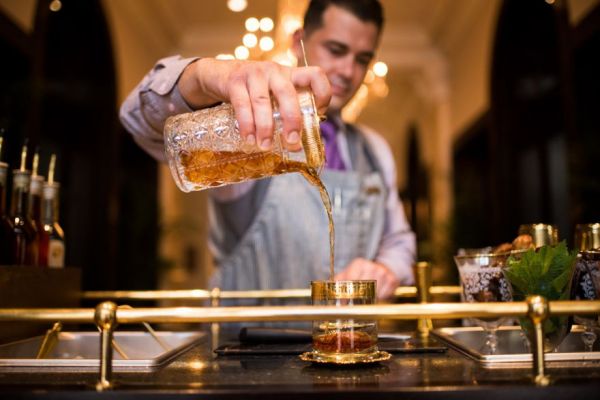 The US Grant Hotel, which was home to the first San Diego Comic Con back when it was called the Golden State Comic Con, will be serving up one Game of Thrones cocktail over the weekend at their Grant Grill property. The Tohrren Square is crafted with Scotch, Sweet Vermouth, Cynar, Essence of Oak and Pastis. 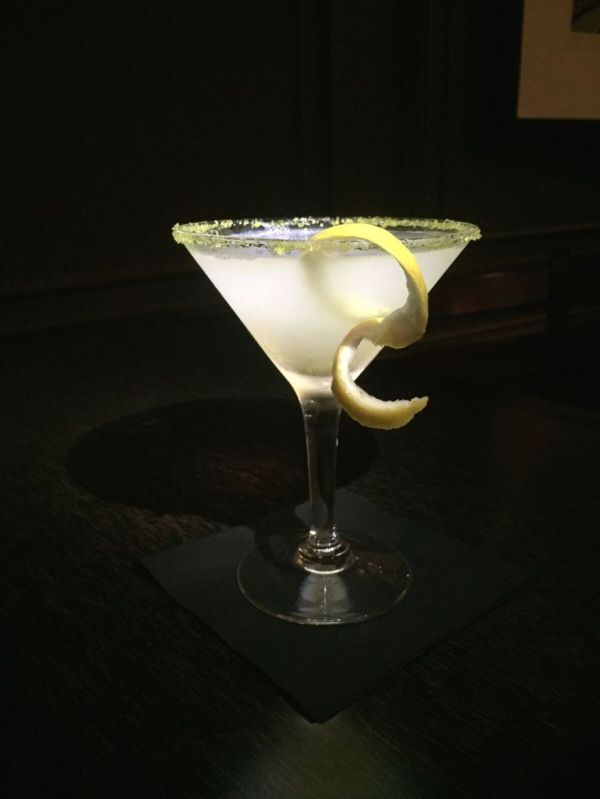 The Bristol Hotel’s bar will be focusing their drink list exclusively on Wonder Woman, mixing up a Golden Lasso of Truth (pictured) with white rum, brandy, triple sec and lemon juice topped with golden raw sugar and a candied twisted lemon peel; a Steve Trevor that combines rye whiskey, amaretto and a dash a bitters all over ice; and an Invisible Jet made from sparkling grape juice, white rum and a float of Bacardi on top. 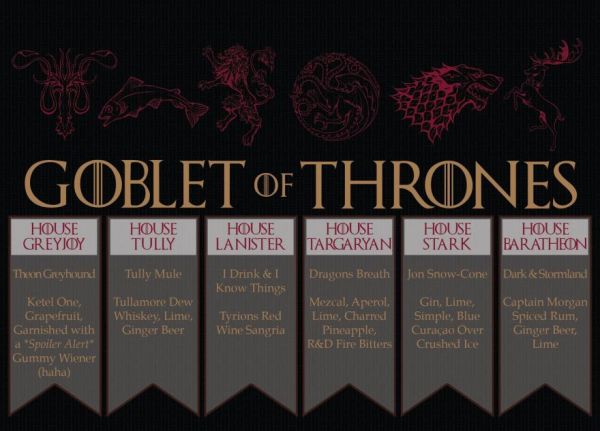 Quad Alehouse decided to play the Game of Thrones and I think they will win rather than die with delightful drinks inspired by some of the series’ most popular houses. The House Targaryan’s Dragon’s Breath contains mezcal, Aperol, lime, charred pineapple and R&D fire bitters, while House Stark’s Jon Snow (yes he’s a bastard, but who’s counting) features gin, lime, simple and blue Curacao all over crushed ice. Meanwhile the House Baratheon’s Dark and Stormland is made with Captain Morgan spiced rum, ginger beer and lime, the House Lanister’s I Drink and I Know Things is simply Tyrion’s red wine sangria and the House Tully’s Tully Mule is traditional Kentucky mule made with Tullamore Dew. I have a sneaking suspicion the most popular drink of the weekend will be the House Greyjoy’s Theon Greyhound made with Ketel One and grapefruit, but most notably garnished with a gummy wiener. 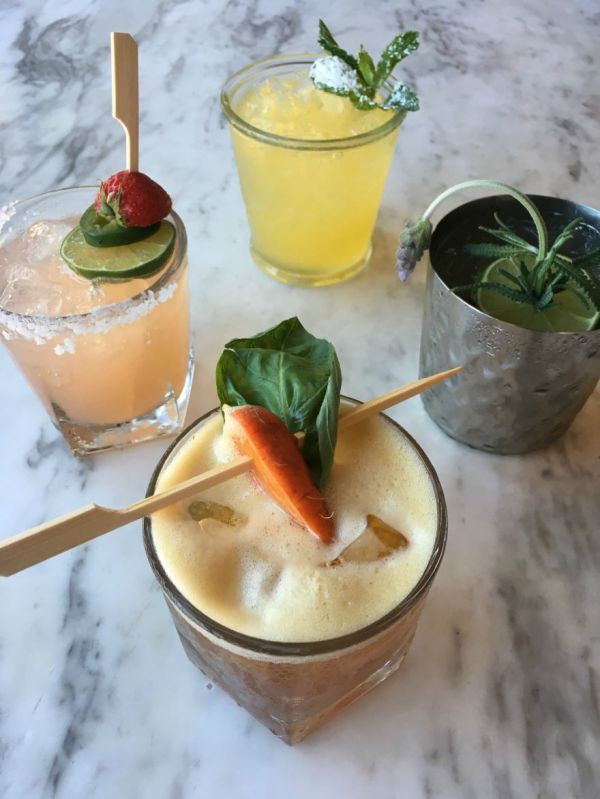 Searsucker is really getting in on the Comic Con train, by offering over dozen drinks just for the occasion. A few highlights include the Twilight Sparkle with Absolut Elyx, raspberries, lemon and St. Germain; The Imp’s Delight with Grey Goose, Lillet Blanc, apricot, passion, cardamom bitters and mint; The Riddler with cucumber gin, bruised mint, lime and soda; Court of Owls with Absolut Elyx, espresso, Bailey’s and chocolate liqueur; The Last Jedi with Bombay Gin, Leopold Apple, lime, ginger, plum bitter and a lavender sprig; and Captain Underpants with Diplomatico Rum, banana, lemon, rose and Peychaud’s Bitters. 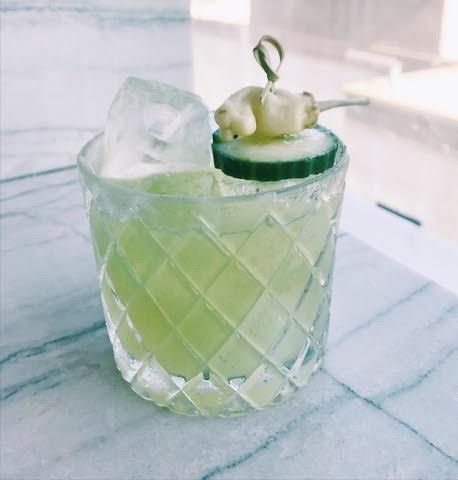 The Nolen (no relation to the Christopher Nolan behind the Dark Knight Trilogy) seems to have put a lot of thought into their comic book cocktails, ensuring the Wonder Woman, with mezcal, tequila, lemon, and pineapple, contains blackberry shrub to give it a beautiful shade of red, the Bruce Banner (pictured), with pepperoncini vodka, cucumber, pineapple, lime and celery bitters, comes out a nice green color and the Dark Knight, flavored with gin, honey, cucumber and lemon, contains charcoal to make it nice and black. 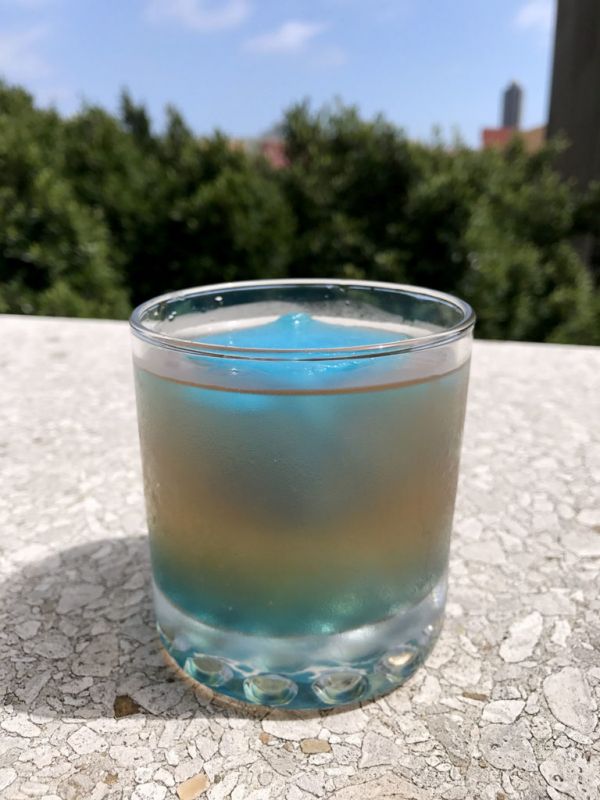 Don’t think for a second that the super classy Westgate Hotel is above pandering to the costumed masses of Comic Con. In fact this upscale hotel is offering a Caped Crusader that contains Eristoff Wild Berry Vodka, homemade chai, Jägermeister syrup, and egg white as well as an I’m Mr. Meeseeks! Look at Me! (pictured) inspired by Rick and Morty that features tequila, clarified carrot juice, honey, and a blueberry ice cube. 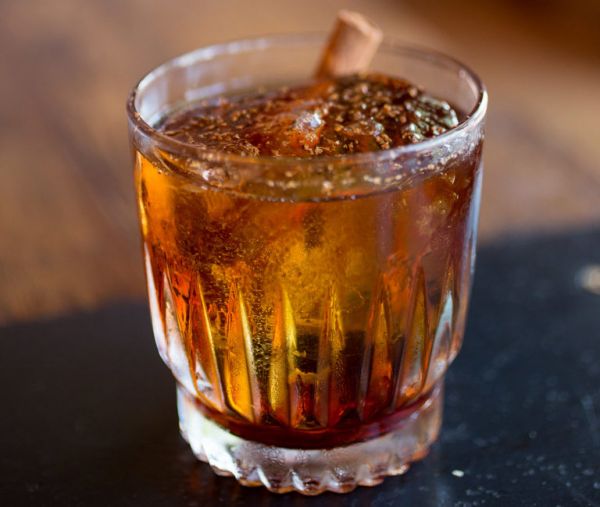 While it’s not downtown near the Convention Center like the other bars and restaurants on the list, Polite Provisions, a popular purveyor of some of the best craft cocktails in the city, have added a number of great geeky cocktails to their always rotating drink lists. The bar is offering two Game of Thrones cocktails, the Lady Stoneheart, with sparkling wine, Punt e Mes vermouth, and Angostura bitters, and the Brave Companion, which is sure to save your night with bourbon, lemon, créme de cacao, and vanilla gomme. If you like something sexy but also strong, consider the Archer-inspired Lana Kane with bourbon, lemon, orange, honey, falernum, and allspice. Personally though, I’d recommend the Millionaire Playboy inspired by that sexy globetrotter Bruce Wayne. It contains Cachaça, lime, peach liqueur, pineapple, orgeat and absinthe -and I can tell you first hand that Polite Provisions makes some of the best absinthe drinks I’ve ever had in my life. Gamers need not worry because the bar has them covered as well with their Gunman Clive (pictured) that contains Reposado tequila, sweet vermouth, creme de cacao and PAF Bitters and the Kojima (named after the famous Japanese video game designer) with Japanese Whisky, Sesame, Madeira, Ginger and barrel-aged soy sauce.

So if you’re feeling hungry this weekend, check out one of these specialty treats if you’re in town or else get inspired to make your own. I know I’m saving quite a few of these cocktail ideas since I can’t drink them right now (being pregnant and all).