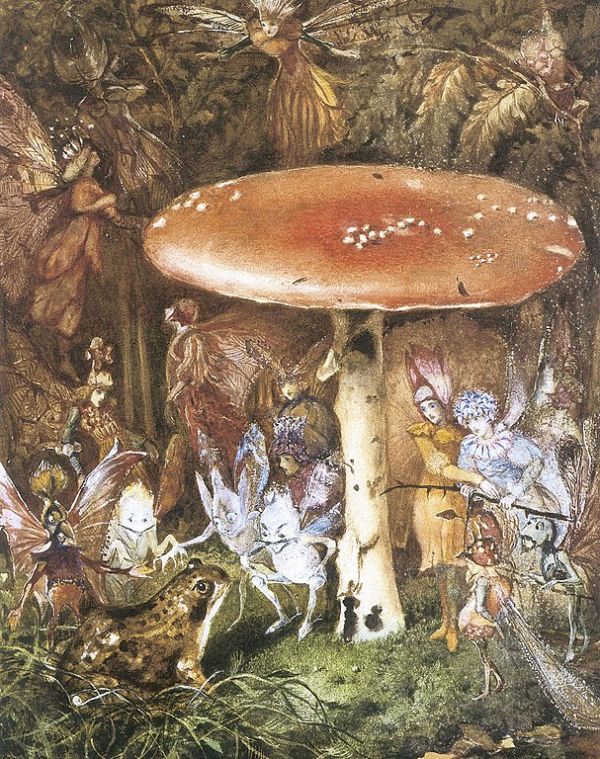 When ingested, mushrooms can be delicious, deadly, or downright hallucinogenic, depending on the species. Mushrooms are also decorative, and are often associated with fairies and other magical forest creatures. There may be a connection there. While the first documented case of a mushroom trip in Britain was recorded in 1799, when a father picked liberty caps to feed his family, the hallucinogenic chemicals in these mushrooms weren’t isolated until the mid-20th century. In between, they became a Victorian motif for magic realms.

While the liberty cap’s “magic” properties seemed to go largely unacknowledged, the idea that fungi could provoke hallucinations did begin to percolate more widely in Europe during the nineteenth century — though it became attached to a quite different species of mushroom. In parallel to a growing scientific interest in toxic and hallucinogenic fungi, a vast body of Victorian fairy lore connected mushrooms and toadstools with elves, pixies, hollow hills, and the unwitting transport of subjects to fairyland, a world of shifting perspectives seething with elemental spirits. The similarity of this otherworld to those engendered by plant psychedelics in New World cultures, where psilocybin-containing mushrooms have been used for millennia, is suggestive. Is it possible that the Victorian fairy tradition, beneath its innocent exterior, operated as a conduit for a hidden tradition of psychedelic knowledge? Were the authors of these fantastical narratives — Alice in Wonderland, for example — aware of the powers of certain mushrooms to lead unsuspecting visitors to enchanted lands? Were they, perhaps, even writing from personal experience?

An article at Public Domain Review takes us through a brief history of magic mushrooms in the British consciousness, and then settles on Lewis Carroll. Modern readers are quite aware of what kind of mushroom Alice ate while in Wonderland, but there are still questions as to what Carroll knew about them. Read about the Victorian view of magic mushrooms here. -via Damn Interesting