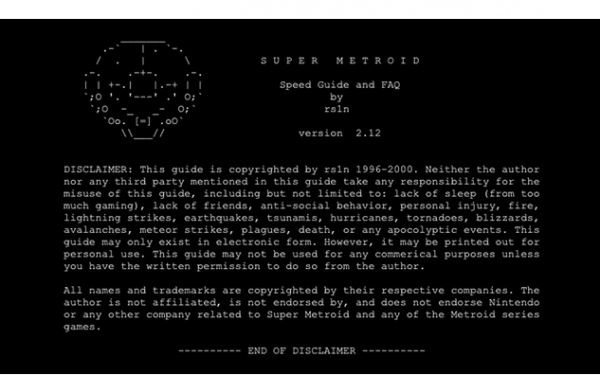 In 2000, a gamer known as rsln released his Super Metroid Speed Guide and FAQ. Take a look through the whole thing, or even just the disclaimer blurb above, and see if you can figure out what makes it unique. You don’t have to know anything about the game, or any game, to see what it is.

Every year or two I remember what’s probably the most scarily/stunningly impressive linguistic feat I’ve ever seen. Every time, I think I must be mistaken, then I read the thing, and I just shake my head in disbelief. It’s been twenty years. Let me tell you about it.

You can try to figure it out for yourself, or you can follow the Twitter thread, or you can continue reading to find out what makes this document special.

But in that guide, it’s not done with hyphenation or variable spacing. It’s monospaced text in a monospaced font.

Just because the author could.

Fully by word choice. In about 1700 lines of text. You might say that his misspelling of “missile” might be cheating, but it’s spelled the same way throughout the entire guide. Commenters at Twitter and at Boing Boing recall typists and early computer adopters they knew who would do this all the time. It’s one of those stylistic things you do to show off (whether anyone notices or not) that eventually becomes an ingrained habit. -via Boing Boing