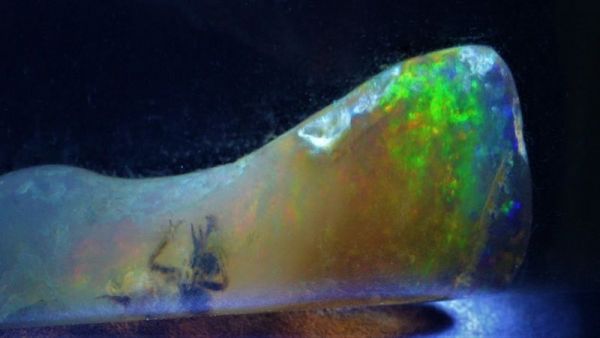 We’ve seen plenty of insects and small animals trapped in amber, which is tree sap that becomes hard as rock over time. Gemologist Brian Berger has something much more rare: an insect trapped in opal! Opal is a mineraloid made of silica and water, and would have taken a very long time to form, so how did this happen?

Further research is being conducted on the specimen currently. The initial theory is that this encasement may mean the opal itself is opalized amber. Theoretically speaking, the insect likely was trapped in tree sap or resin which, over time and under the right circumstances, was preserved as amber with the insect encasement. This is a process many of us are familiar with. However, a second, much rarer process of opalization can also occur. And so, in this case, as conditions changed for the amber specimen, it is possible the amber opalized, preserving the inclusion. Amazingly, the silica surrounding the insect also structurally changed to produce the play of color.

Berger purchased the opal in Indonesia; it was originally found on the island of Java. Read more about the opal at Entomology Today. -via Gizmodo