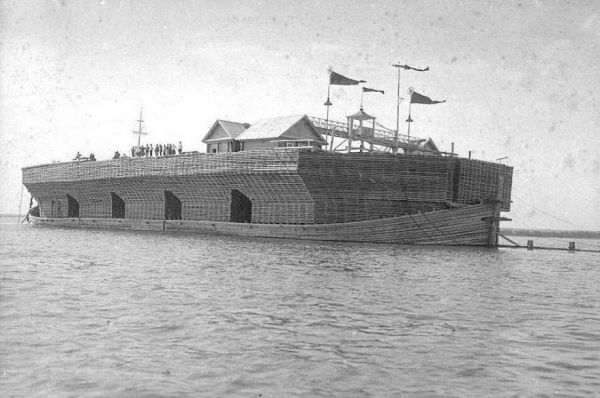 This big boat looks like Noah’s ark, and likewise it was constructed to sail only once, and not even on the ocean. Back before Russia had railroads, they developed a method of moving timber from the forests to the cities on the Volga and Kama rivers. They built these huge boats called belyanas from the timber, floated them downriver, and then disassembled them as their cargo. Oh yeah, there’s plenty more timber inside.

The belyanas were constructed without any tar as waterproofing, and only in the middle of the 19th century did they even begin to use nails. The logs, beams, and planks were tied together for the trip. Once they arrived at a port city, pine and spruce was sold to fuel steamships and heat homes. The cabins on the deck that housed the crew were sold whole as houses. What I’d like to know was how the crew made it back up to the forests afterward. Read about the belyanas of Russia and see more pictures at Amusing Planet.

Was the Unicorn an Actual Historical Animal?

Ski Report with a Bonus

Something Is Not Right With The World

A Brilliant Poetry Star Who Burned Out Too Quickly