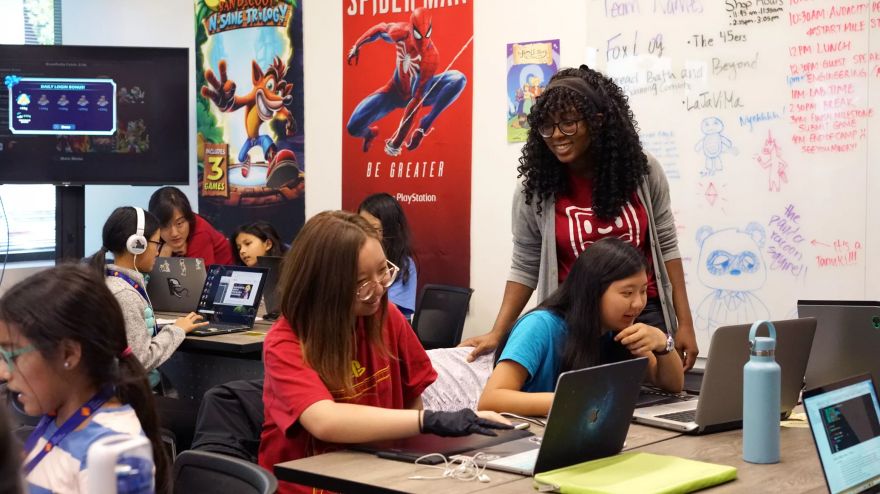 The gaming industry much like the wider tech industry is dominated by males, mostly because women aren’t being given opportunities to break through and unleash their potential in the industry.

Though video games aren’t made just for guys, since there are a lot of girls who also like gaming, many obstacles stand in the way of women in tech and specifically in the video game industry to become successful or at the very least, to enter the industry.

However, there are initiatives to include more women in several aspects of video game development and the summer camp Girl Makes Games tries to target the issue at the root, by teaching young girls how to make their own video games.

In a room full of light and laughter, 20 girls work together to make video games. They are aged between nine and 16 and organized into teams of four. Their games span genres like platformers, top-down RPGs, and narrative adventures, exploring a range of themes including global warming, empathy, and friendship.

This is Girl Makes Games, a summer camp in which children work with mentors to create their own video games. Celebrating its fifth year, the program is an attempt to convince and reassure girls that game design is a potential career.

Each of the teams in camp has its own name and its own counselor. Often, the counselors are young women who were once enrolled as campers in Girls Make Games, or who have ambitions to work in games. Most are taking some kind of game-adjacent course at college, such as computer science or game design.

There is a lot of potential for women to create more diverse and innovative games in the industry. And I think it’s needed now more than ever. Despite experiencing a boom, the gaming industry has been stagnating in terms of original video game releases for the past several years.

Other factors may contribute to this effect but it is also possible that injecting some fresh ideas could help developers reach a wider audience and produce more engaging and novel game ideas. And bringing more women into the industry could definitely help in doing that.