How to Use Exhibition Guides

How to Use Exhibition Guides

This exhibition is organized by the Institute of Contemporary Art, University of Pennsylvania.

Support is provided by the Pasadena Art Alliance.

Cauleen Smith is an interdisciplinary artist whose work reflects on the everyday possibilities of the imagination. The backbone of Smith’s artistic practice is filmmaking, although after years of showing her work in media contexts, she expanded her film and video output through performance, drawing, sculpture, and banners. The series of films and installations in this exhibition reflects Smith’s interest in utopian thinkers, especially artists and musicians who have created new languages through open and improvisational approaches.

Give It or Leave It coalesces separate and unrelated histories of spirituality, creativity, and utopianism into a unified emotional cosmos. Musician Alice Coltrane and her ashram, a 1966 shoot by photojournalist Bill Ray at Watts Towers, artist Noah Purifoy and his desert assemblages, and black spiritualist Rebecca Cox Jackson provide sources of inspiration.

The title of the exhibition, Give It or Leave It, challenges the colloquial “take it or leave it,” and reflects the role of generosity and creation in the spiritual and artistic output of the historical figures that inhabit the exhibition. Smith proposes a new rule for a better world: creating something, offering it, and gifting it—regardless of whether the gesture is accepted or rejected.

The wallpaper in the galleries depicts sites and references that recur throughout the exhibition, imagining them as part of a contiguous, otherworldly landscape. Hanging over this backdrop, this reproduction of a group portrait taken by photojournalist Bill Ray shows young men at the foot of the Watts Towers in Los Angeles. The towers were built by Italian immigrant Simon Rodia from 1921 to 1954 on the lot where he lived. Rodia never explained why he built the whimsical sculptural environment but entitled it Nuestro Pueblo (“Our Town”). The site has long registered as a symbol of self-dedication and renewal for the surrounding neighborhood; the sculptures were left untouched during the 1965 Watts Rebellion. In 1966, LIFE magazine hired Ray to document the aftermath of the incident. The photograph seen here was not published when the story ran but was of interest to Smith because of the way the subjects’ “easy, relaxed, and elegant stances contradicted the photographer’s initial agenda, which was to capture the simmering rage of Black youth.” Smith reimagines this photograph in her video Sojourner.

Pilgrim interweaves Smith’s footage of musician Alice Coltrane’s ashram in Agoura, California; the Watervliet Shaker village of Troy, New York; and Watts Towers, against a soundtrack of Coltrane’s “One for the Father” (1978). In the early 1970s, Coltrane experienced both astral projection and spiritual visitations. These incidents led her to adopt the Sanskrit name Turiyasangitananda, and in 1975 to found the Sai Anantam Ashram where she elected to live a life of structured spiritual practice while continuing to create music that was unrestricted by form or societal expectations. Coltrane’s memoir Monument Eternal describes her spiritual initiation and revelations. Smith was struck by the similarity of Coltrane’s visions to mysterious machines labeled “Heavenly Musical Instruments” in nineteenth-century Shaker “gift drawings,” which were made by young female members of the sect who recorded their ecstatic visions despite a general prohibition against visual culture in Shaker society. The gift drawings were part of an “Era of Manifestations” that revivified the sect, known for its egalitarian philosophy and communal living practices, at a time when its membership was in decline. Smith sees this phenomenon as an example of turning to visionary aesthetic expression in times of crisis. 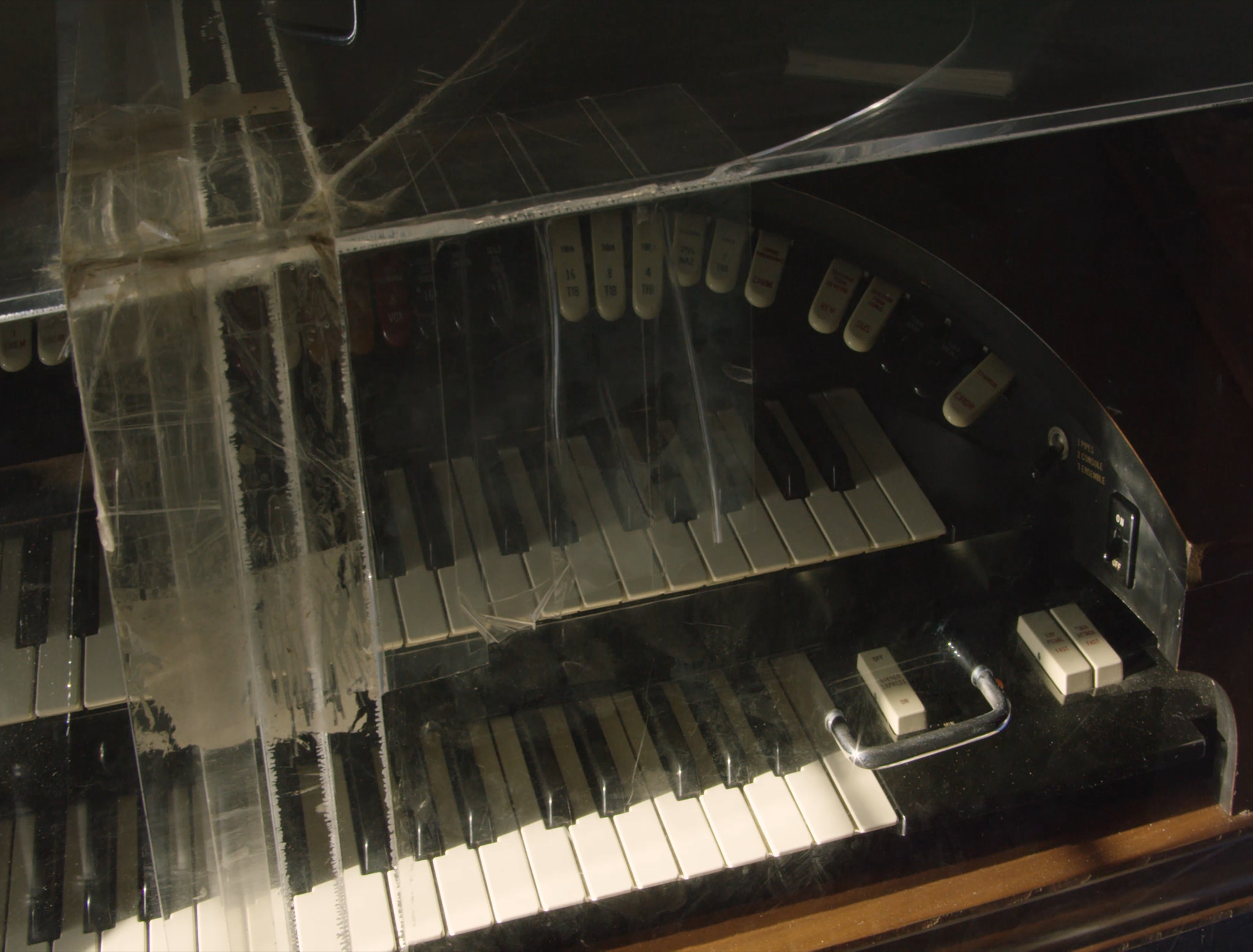 In Epistrophe, closed-circuit cameras record what the artist refers to as an “archive of associations, travels, affections, desires, questions, and longings” set before sweeping landscapes and skyscapes sourced from NASA and National Geographic. Projecting the intimately scaled tableaux onto the surrounding walls, Smith creates a provisional, dreamlike environment in which the familiar contours of the present are transformed into fantastic new worlds, untethered to a specific time and place and freed from entrenched cultural narratives.

Smith draws upon experimental jazz group the Art Ensemble of Chicago’s decades-long dedication to improvising with “little instruments”—including gongs, cymbals, toys, bird calls, and noisemakers of all shapes—as a way to broaden the sonic, historical, and geographical spectrum of music traditionally associated with African Americans; here, Smith explores what it means to do the same in her expanded cinema practice. By using repeated, fragmented images and objects of personal significance to build a world that reflects her distinct perspective, she creates space for others to do the same. 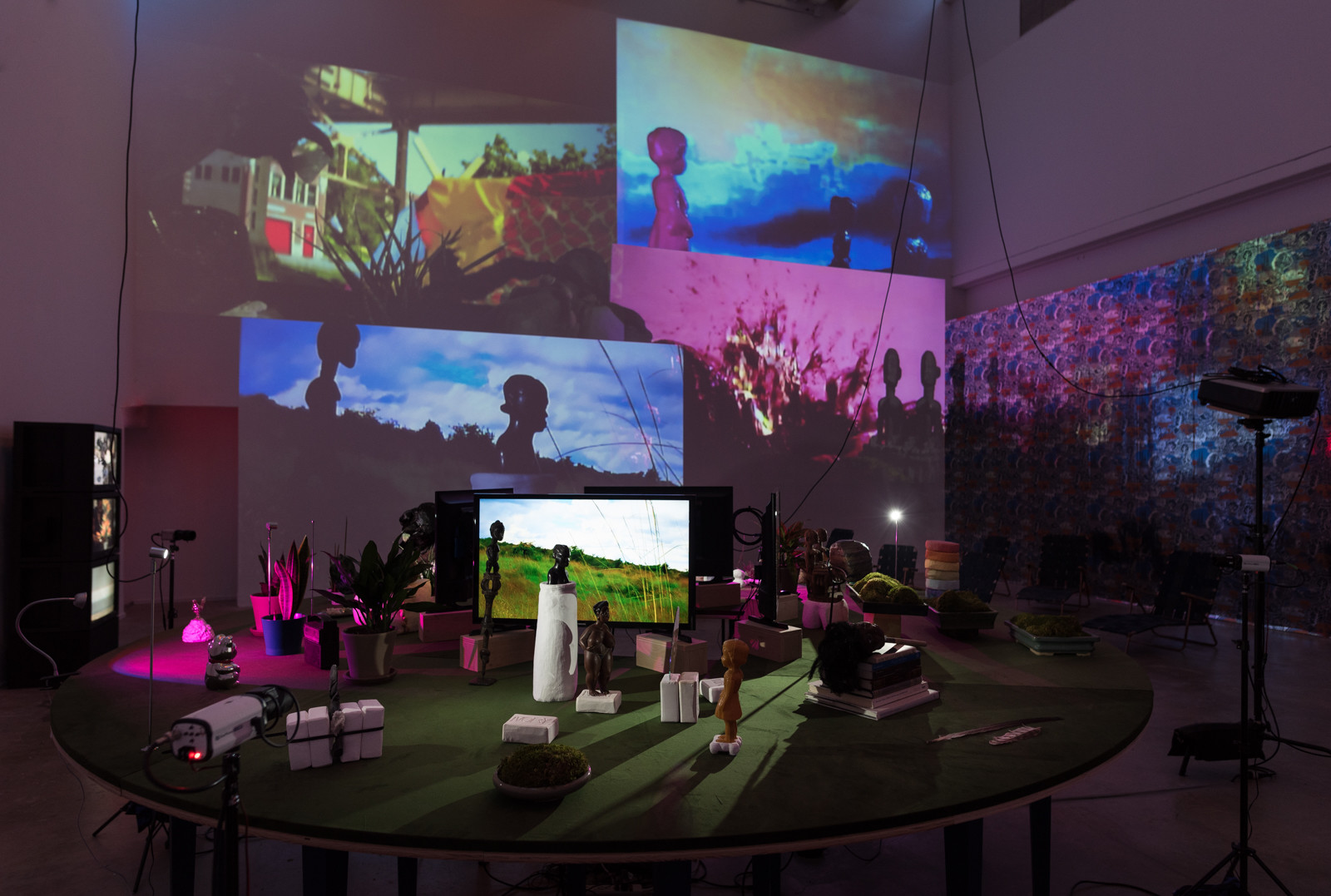 Afflict the Comfortable / Comfort the Afflicted, 2018

As part of her multidisciplinary practice, Smith has staged a number of outdoor processions featuring banners with emblematic imagery and phrases. These performances hinge on her interest in subverting the aggressive undertones of militaristic and religious marches in order to create equally disruptive, yet convivial public happenings in the spirit of grassroots community action. The artist also creates banners that function as standalone artworks while still referencing formal processions.

Identifying the artist Paul Thek (1933–1988) as “one of the patron saints” of this exhibition, Smith adapted the text and style of his painting Afflict the Comfortable, Comfort the Afflicted (1985) into the banner seen here. Thek, considered one of the first artists to create immersive environments or installations, in turn borrowed the phrase from writer and humorist Finley Peter Dunne (1867–1936), who used it satirically in 1902 to describe the role of the press. 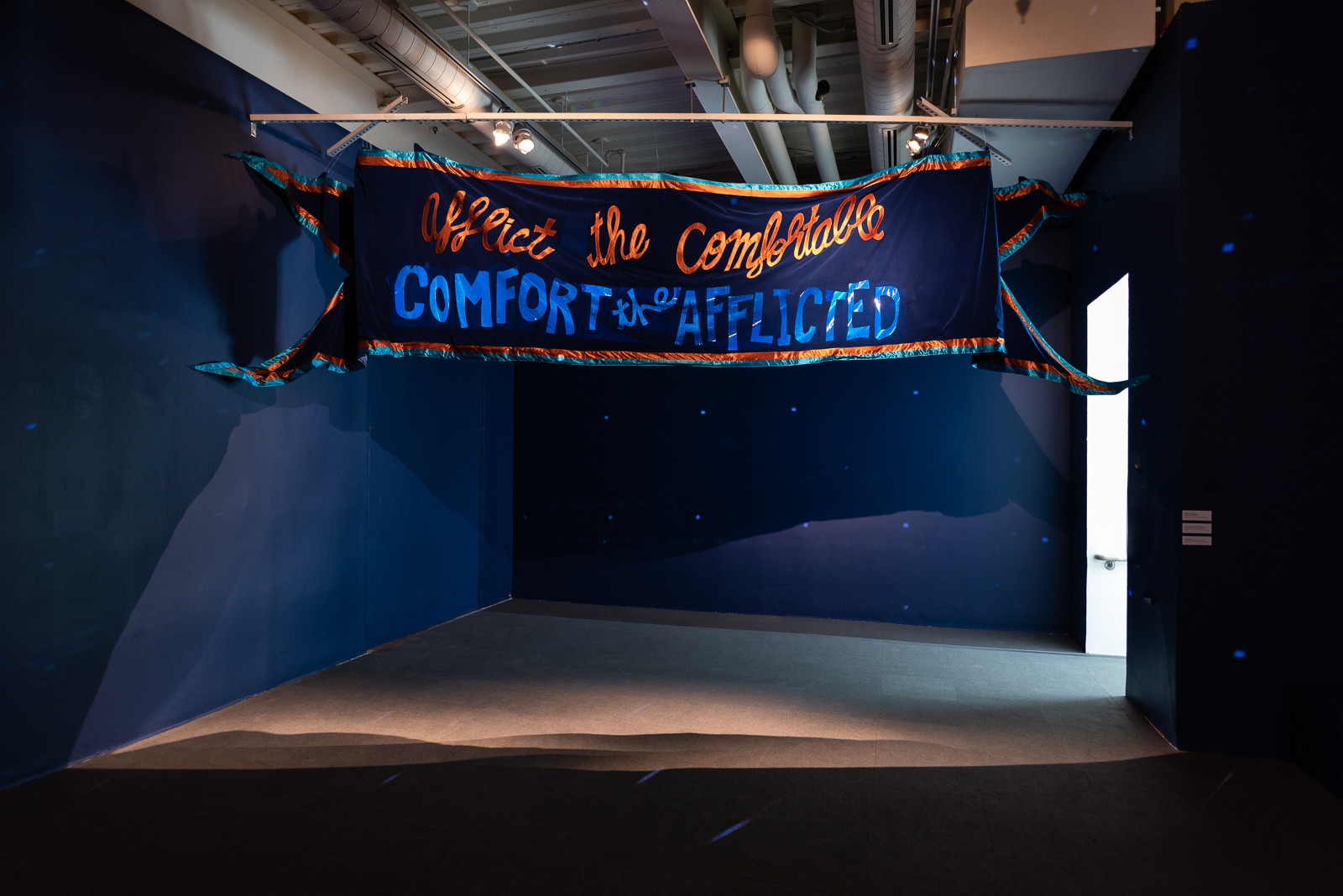 Afflict the Comfortable / Comfort the Afflicted, 2018

Referenced throughout the exhibition, the Watts Towers take on an expanded role in Sojourner. In the video, Smith reimagines the 1966 group portrait taken by Bill Ray using a diverse cast of female actors whose actions were both scripted and improvised. The video was shot at the Joshua Tree Outdoor Museum, a freely accessible, ten-acre environment created by assemblage sculptor Noah Purifoy, who began his practice by transforming detritus from the 1965 Watts Rebellion into works of art. Purifoy was also a founding director of the Watts Towers Art Center and, as a member of the California Arts Council, initiated projects focused on using art as a tool for social change.

Additionally, Sojourner references the Combahee River Collective (1974–80), a Boston-based group of anti-capitalist Black lesbians who fought to redress concerns overlooked by mainstream (heterosexual, white, middle-class) feminism. Widely credited with coining the term “identity politics,” their influential document, “The Combahee River Collective Statement” (1977), is quoted throughout the film, and interwoven with the words of Alice Coltrane and Rebecca Cox Jackson. 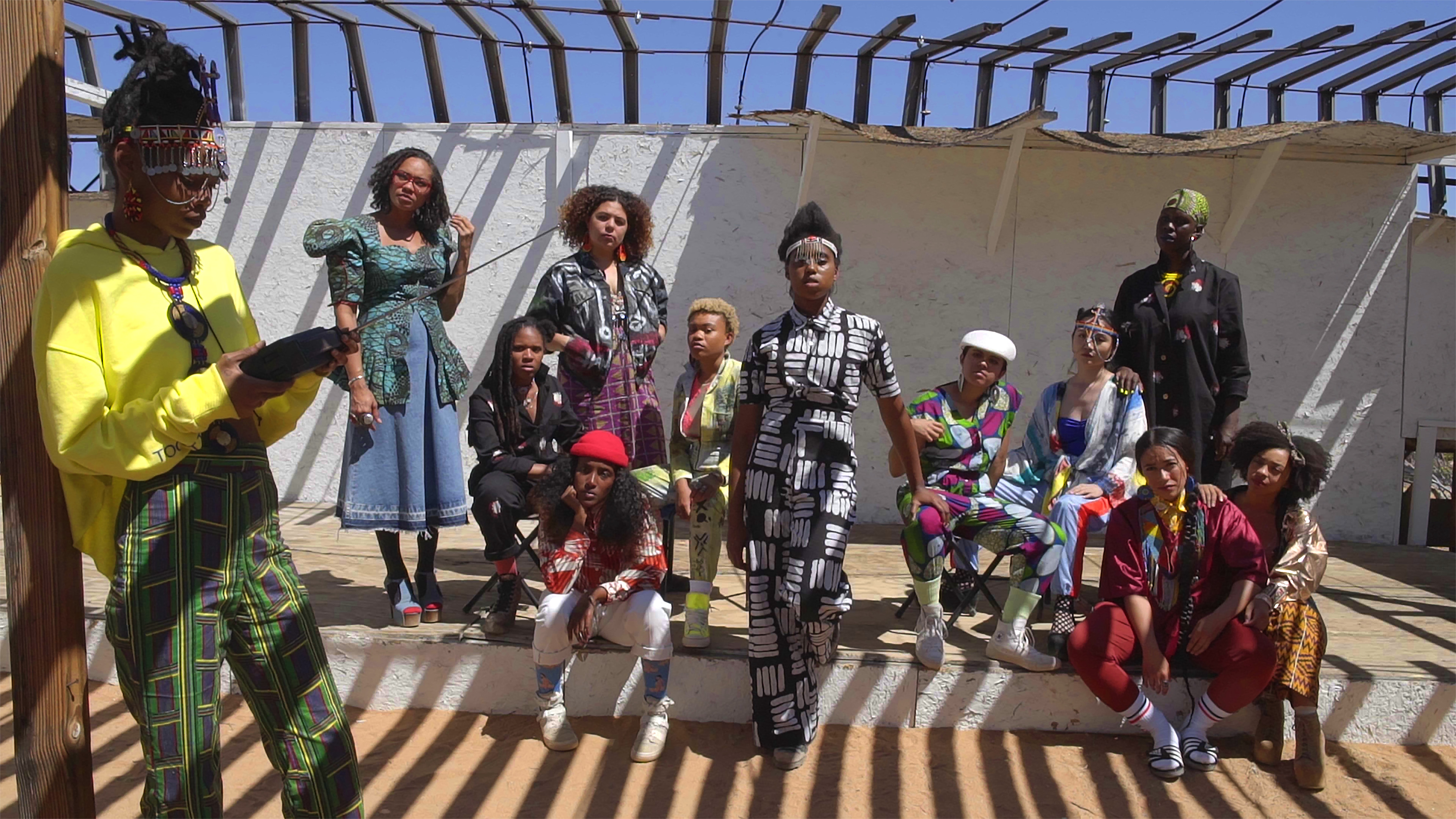 The two Rebeccas of this installation’s title are the nineteenth-century figures Rebecca Cox Jackson (1795–1870), a Black spiritualist and free woman who, among other callings, founded the first Black Shaker community in the United States, and her companion and protégé Rebecca Perot. The early American Shakers and their particular form of communal spirituality reflect an essential nexus for Smith’s investigation of radical generosity and divine inspiration.

Jackson experienced a religious awakening in 1830 and subsequently left her settled married life in Philadelphia to travel as an itinerant preacher, an indication of the ways in which ecstatic experience functioned for her and other women of her time as a source of personal power. In the course of her travels, Jackson discovered the Shakers of Watervliet, New York, a group whose spiritual practice aligned closely with her own beliefs. Welcomed as a prophet, she stayed there for four years before departing with Perot to establish the Philadelphia “family” of Black Shakers. Following Jackson’s death in 1871, Perot adopted her surname—fully conflating their identities—and continued to lead the Philadelphia community for forty years. In this installation, two abstract, hand-painted “scratch” films dedicated to the Rebeccas are projected onto rotating disco balls that disperse the light and the Rebeccas’ visionary energies throughout the space. 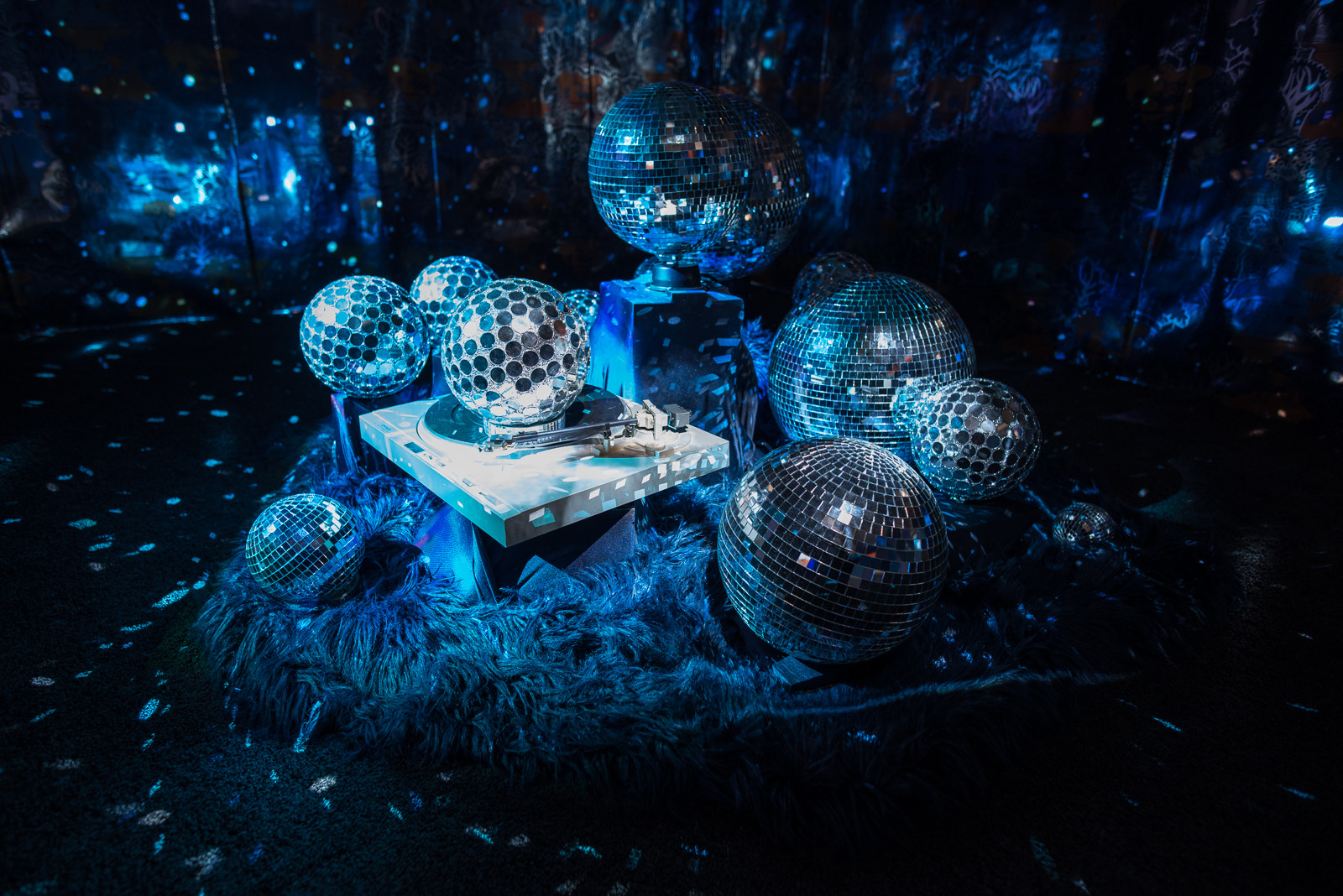