If GMC’s newly unveiled 2022 Hummer EV Edition 1 is any indication, the future of American car design looks very interesting indeed. While the company has returned to the design well of earlier successes, as many companies have–see the Ford Mustang, Dodge Challenger, Chevy Camaro, et cetera–they’ve removed the single biggest criticism leveled at the gas-guzzling beast of the ’90s: That it was petrol-powered.

In contrast, the Hummer EV is zero-emission, using three electric motors to produce 1,000 horsepower and an absurd 11,500 lb-ft of torque. 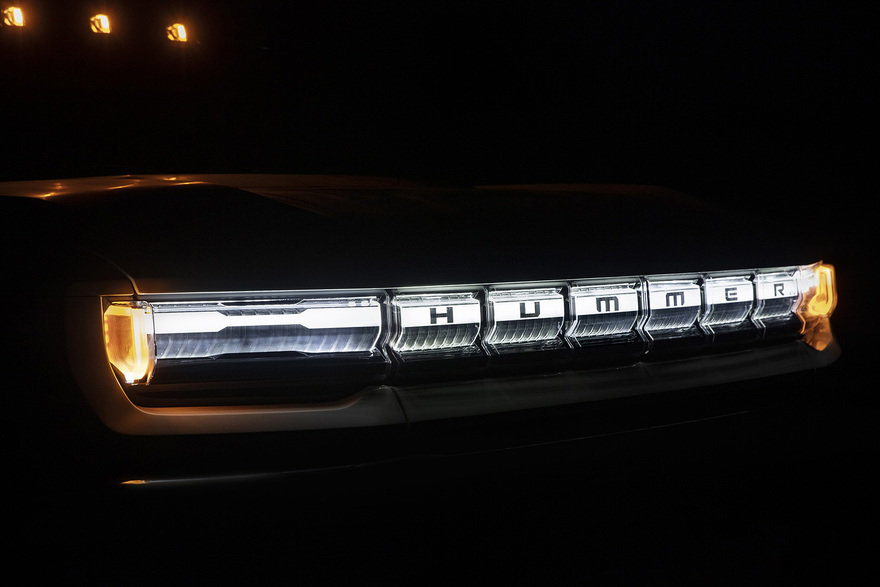 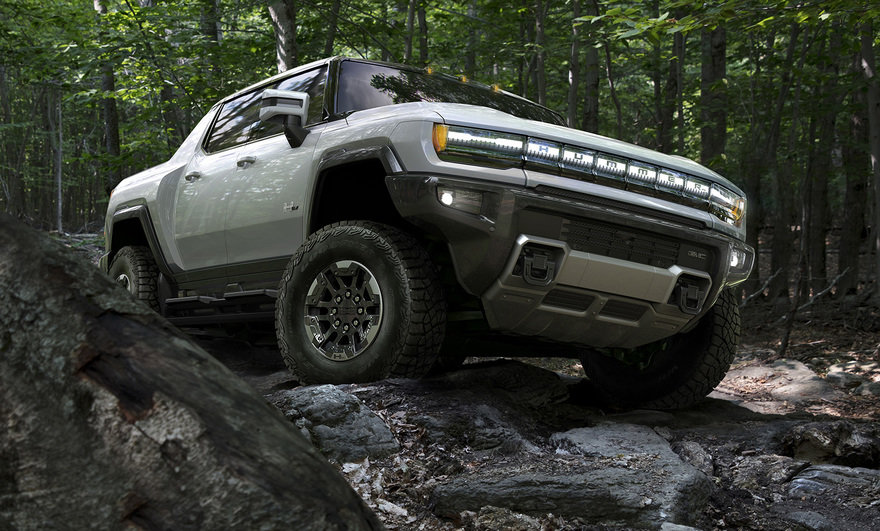 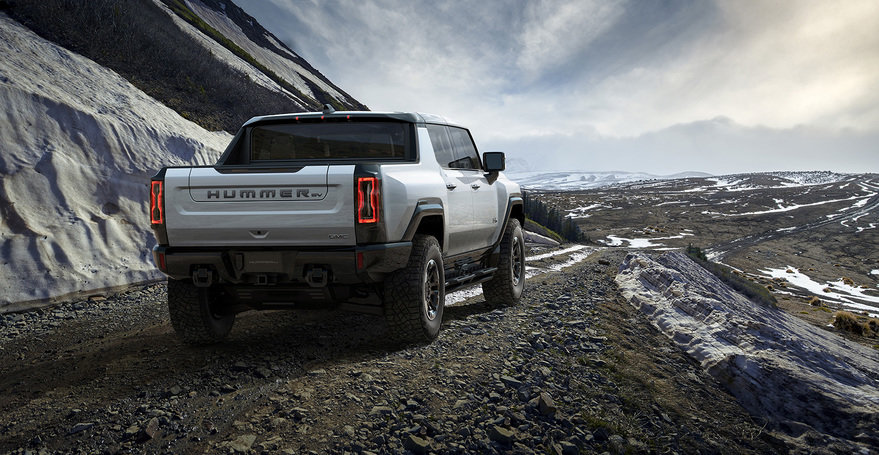 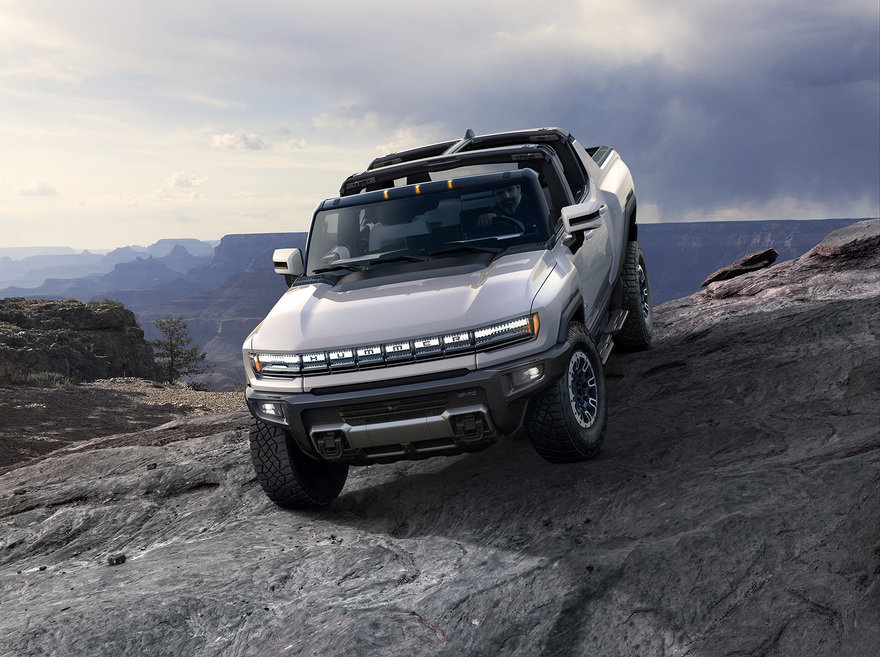 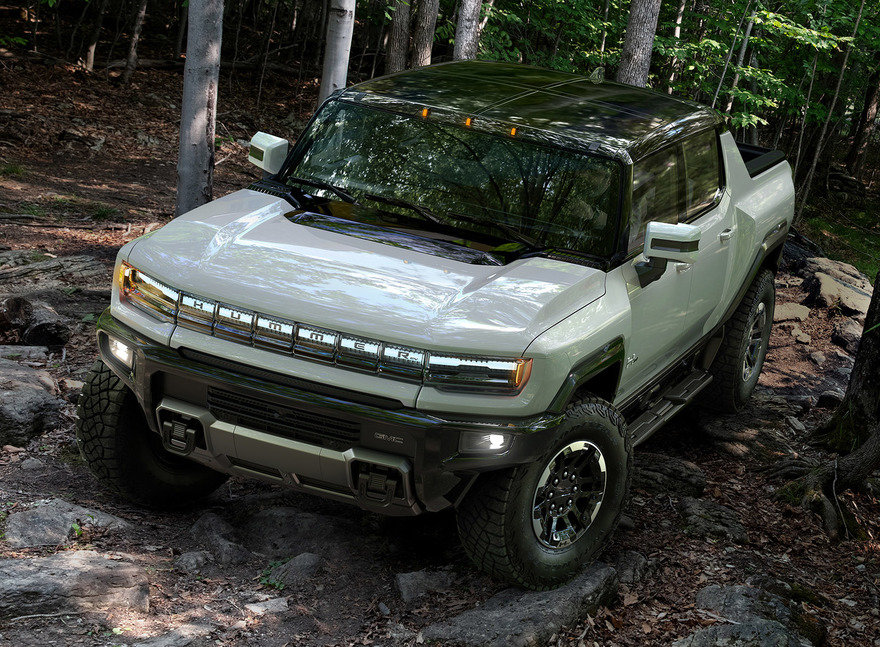 The redesign was also apparently used to fulfill every functional design and engineering fantasy harbored by the development team. An adaptive suspension boosts the vehicle height by up to six inches, while cameras beneath the car allow the driver to ensure they’ve got adequate clearance:

I’ve started watching “Long Way Up,” the British program following Ewan Macgregor and Charlie Boorman as they and their crew attempt to traverse South America with electric motorcycles and trucks. One of their frustrations comes when they plug the charger in, then later find no power transfer has taken place. GMC’s designers have provided a brilliant visual cue in the headlights that clearly communicates when current is flowing:

The “Infinity Roof” can be entirely removed in panels, giving the vehicle an open-air feel. And unlike removing a full hard-top–which must by necessity be a premeditated act, with the entire top left in one’s garage–going topless with the Hummer EV is meant to be a spontaneous decision, with all of the panels able to fit in the “frunk,” the void left by the lack of a motor engine. 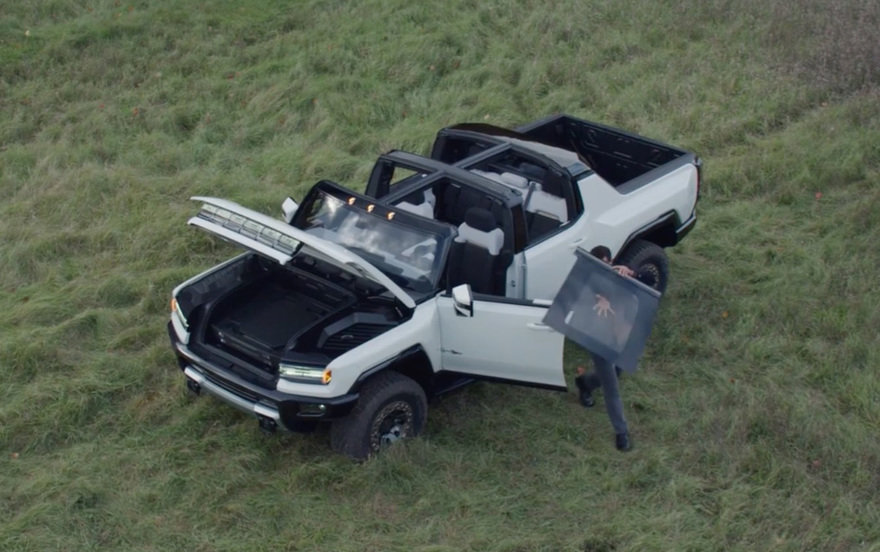 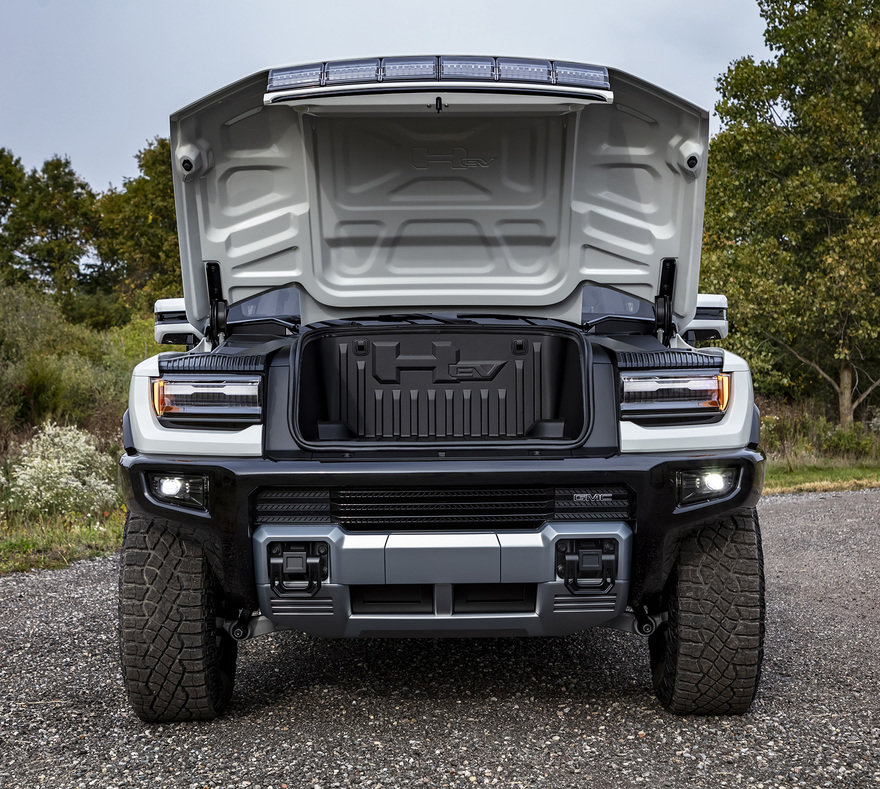 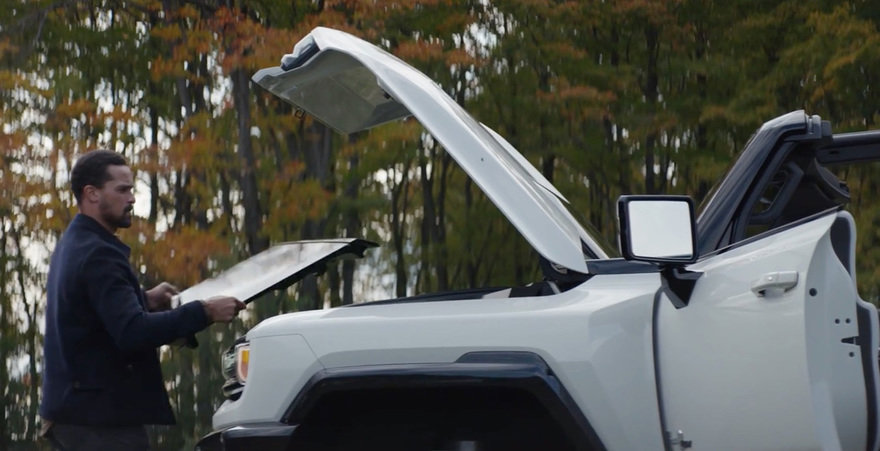 The Hummer’s bed features GMC’s brilliant MultiPro Tailgate (though at press time there were no images/video of it in action): 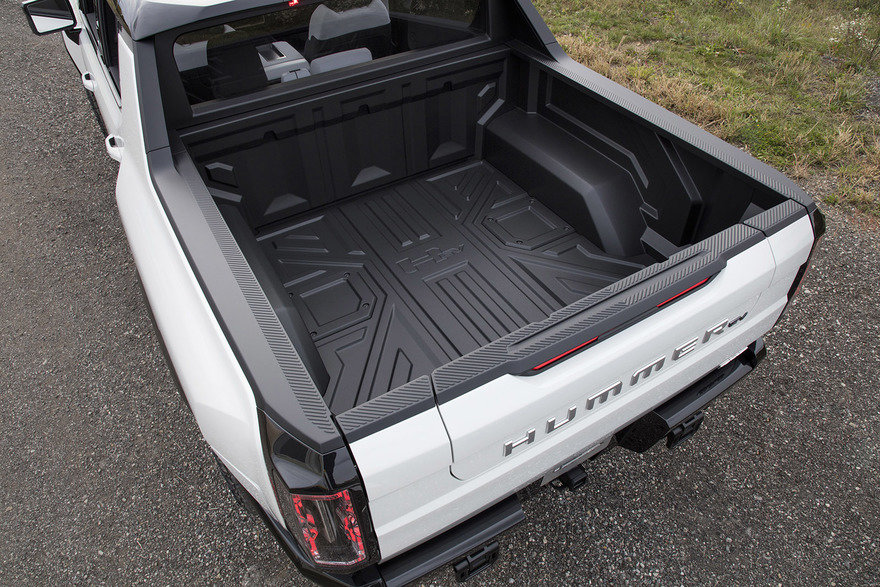 If I had to sum up the interior design aesthetic in two words, they’d be “modernist chunky.” Each of the vents look like their own refrigeration unit. And while the 13.4″ center screen looks large enough to watch movies on, I’ll say that no automotive designer to date has figured out how to elegantly integrate such a large screen into a dashboard. They always look like bolted-on afterthoughts to me, and this one is no different. 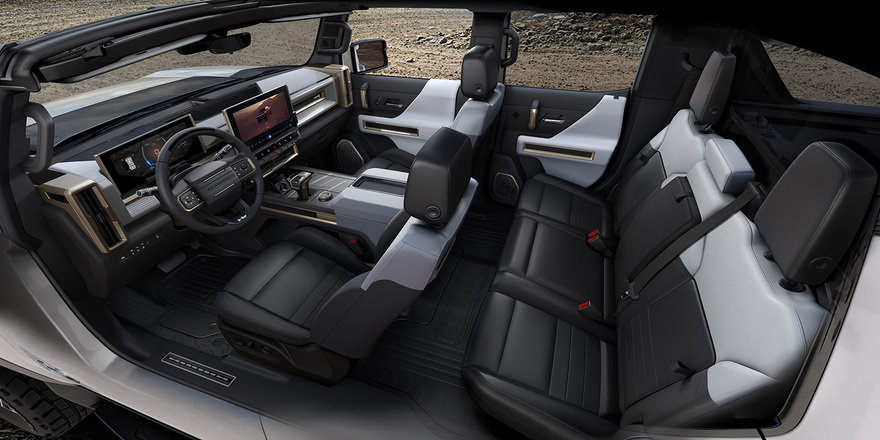 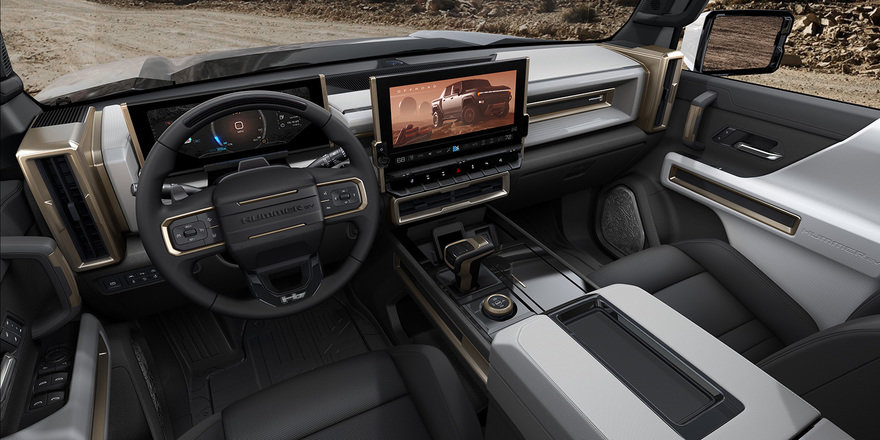 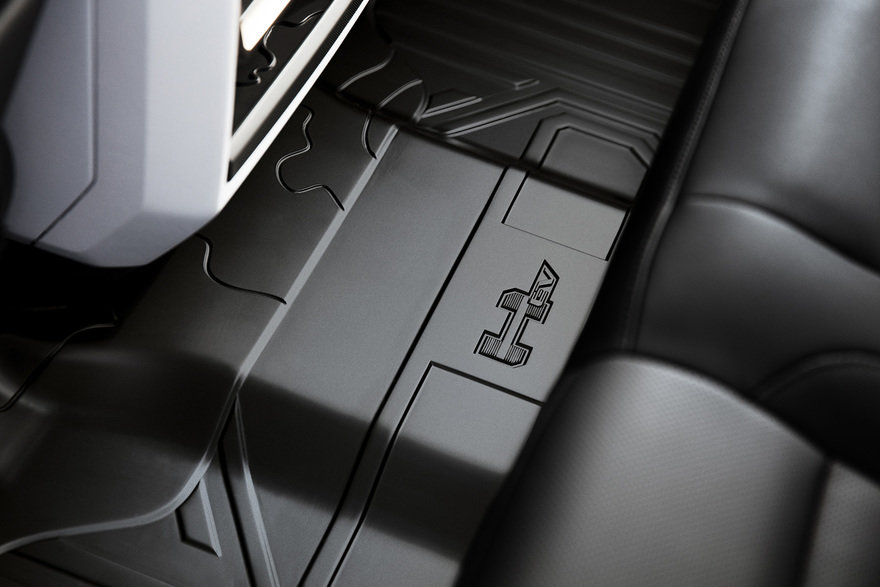 Perhaps the most astonishing thing about the Hummer EV is the price: It starts at an eye-watering $112,595, placing it well beyond the reach of the average American. Sustainability, off-road capability and technological prowess do not make for an affordable vehicle. But they reveal that GMC’s designers and engineers are capable of creating things that would have been unimaginable just ten years ago. Which makes me think that in another ten years, when features like these become more affordable and trickle down into Everyday Joe cars, the auto design landscape will be a lot more exciting than it is now.